Having seen the overstretched Doha International Airport for 2 hours on the way to Vietnam I knew I didn’t want to spend 9 hours there on the way back. We couldn’t even get anywhere to sit for an hour, never mind lay down.

I’d been debating for a few weeks before we left for our two-week trip to Vietnam whether to fork out for a hotel or stay the night in Qatar airport. Other Qatar Airways passengers can get a hotel voucher when they have a stopover as long as ours, but apparently our super cheap flight meant there was no budget for this. I tried to pull some strings at work, but was firmly told it was up to me to sort my own hotel.

I had a look around and found a relatively cheap hotel near the airport called La Villa, where double rooms were going for around £34. It was right in the centre and close to the seaside Corniche boulevard. I decided to just go for it and get it sorted on booking.com – I was bored of weighing up the pros and cons. Click, click, yep, done, then I received an email thanking me for my booking.

Please be advised that couples checking in to the same room must present a marriage certificate upon check-in as per Qatari law.

Damnit. There was no getting around that one, me and my boyfriend would need two rooms. Pushing it up to £68 and doubling the price. 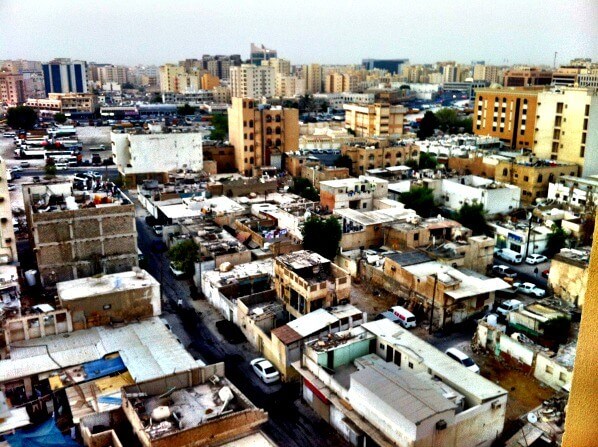 Cancel that then, and I booked two singles knowing that there was a free cancellation option upto 48 hours before check in. Although in moments of boredom I carried on the debate in my head as to whether I’d done the right thing, right up until we were actually there.

I might be a travel blogger, but I’m inexperienced in layovers and changing planes. We only had 9 hours in Qatar and we wasted over an hour because we had no idea what we were doing, and just kept going wrong. Lucky for us our flight did actually get n about 30 minutes early, but if you’re planning on leaving the airport here’s what to do for a quick escape. 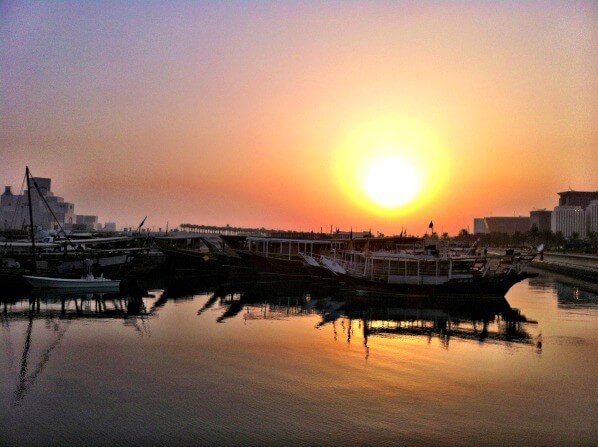 1. Get off at the first terminal,  arrivals

The announcement on the airport bus told us that if we have yellow tickets we must go to Departures. This may sound obvious to some, even me now, but we followed that instruction and carried on to Departures, rather than Arrivals. And so we couldn’t get out the airport once we’d arrived in the terminal.

We had to sit and wait with the other dumbasses for a bus to take us back to Arrivals.

2. Know if you have a hotel voucher

If you have a hotel voucher given to you by the airline go to the hotel voucher desk just as you get in the Arrivals doors. If you have booked your own hotel join the passport and immigration control queue. 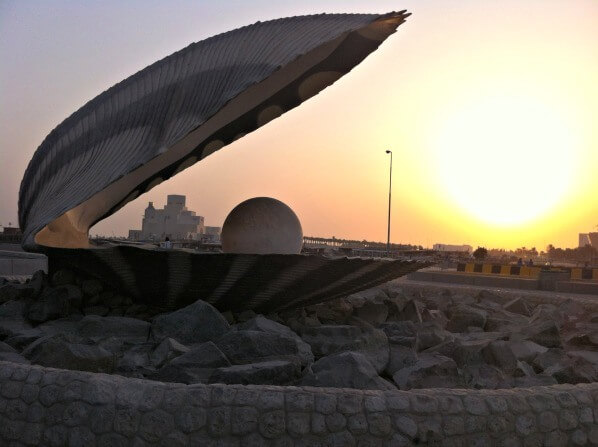 We joined the hotel voucher queue, as there was something vague like ‘hotels’ written across the desk. We waited for ages and then were told to join the passport queue as they were getting ferried directly to their hotels supplied by their airlines.

Somewhere around 2 million people work in the trav

Errrmm, did YOU know the beaches of the Outer Hebr

Went to Sandringham yesterday, to see how the Roya

3. Have the visa cash ready

If your passport was issued in one of these 34 countries you can get a visa on arrival for 100 Qatari Rial (about £17). If you don’t have the correct currency make sure to check the people in front of you are paying with card and clearing the desk ok. I sailed on through, but my boyfriend ended up being directed to the only desk where the card machine was broken. This meant he had to walk across the airport to the ATM, queue there to get some cash out, then queue to get some special prepaid card, then join the queue of people who’d suffered the same fate. Apparently he couldn’t just go to another desk because they’d already started his entry process. He also had to pay more as he had to buy the prepaid card. 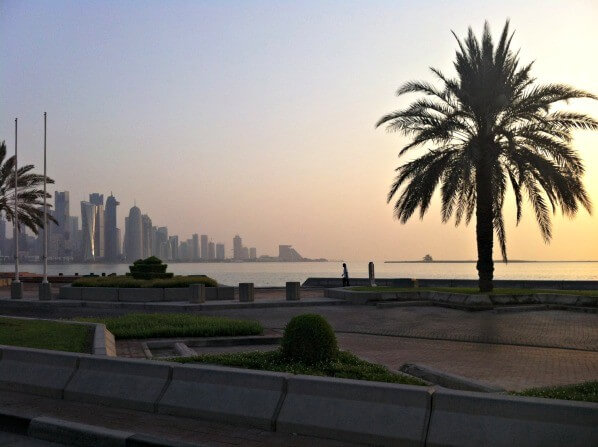 We cleared the last security checks easily and went outside to pick up a taxi. The second we stepped outside the heat hit us and both of us immediately fogged up, thanks to our glasses. Men in white  jalabiyas were offering us taxi rides and asking where we wanted to go, but neither of us could see a thing. Little bit nerve-wracking, but through the fog I could see ‘Karwa’ written on the taxis over yonder, and the magazine I’d read on the flight said to use those, so off we went. 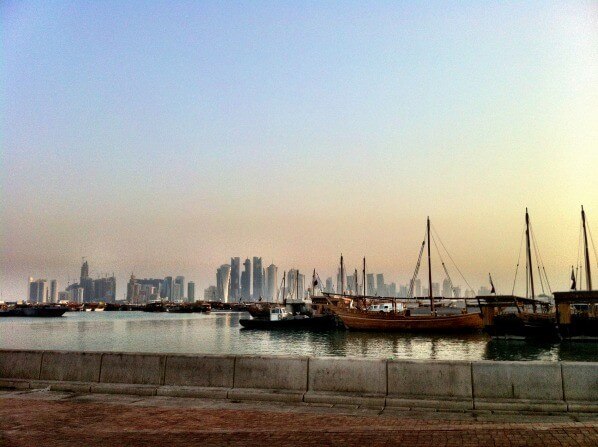 We paid 50 Rial (£8.50) for the 5-minute journey to La Villa Hotel. On the way we saw huge skyscrapers, beautiful mosques and the uniquely designed national museum. I could also see big flash cars, huge new roads and looming bank buildings. There weren’t many people about though, especially compared to Ho Chi Minh City where we’d just come from. There wasn’t a soul in sight.

The hotel was fine. Nothing fancy, but we each had a nice big bed and a big TV, which I was too tired to even turn on. By the time we got there it was 11:30pm – we decided to just go to bed and get up early to do a taxi tour instead – by midnight and after a quick look out my window I was asleep.

We booked a taxi at the front desk for 5:30am and told the man we wanted to see The Pearl. I slept lightly, although slightly paranoid about waking up in time seeing as you couldn’t phone each other’s room, Waiel’s phone didn’t work and the Wi-Fi was next to useless. 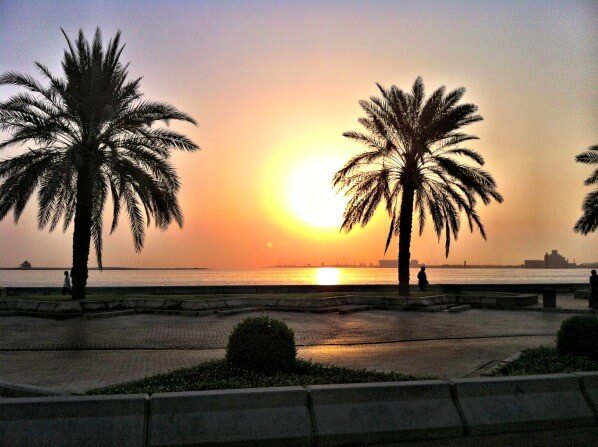 After a quick shower I was in the lobby for 5:25am and the taxi was there right on time.

We soon realised there had been a misunderstanding on ‘The Pearl’. I’d wanted to see the flats and man made island, which was apparently 30 minutes drive away. We only had 30 minutes till we had to be at the airport.

Our taxi driver took us to The Pearl monument via the ATM. Thanks to Doha’s one-way system we got to see The Corniche, and get close to the skyscraper filled skyline. We saw a palace and the football stadium in the distance, getting ready for the World Cup 2022. The sunrise was incredible – one of the brightest and harshest I’ve ever seen. Getting out the car was like hitting a wall of heat though, it was sweat inducing to just cross the road, and it was still early. Not sure how all those footie fans will cope with it in a few years time.

Our friendly taxi driver dropped us at the airport for 6am and we sailed through with our hand luggage – the checked in baggage was all taken care of. One coffee later and we were at our boarding gate, mission ‘9 hours in Qatar’ accomplished.

The cost of our stopover in Qatar 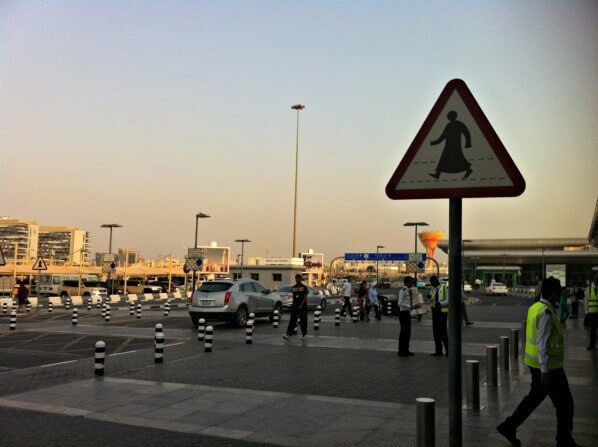 If you can spare £76.50 I’d definitely recommend getting out of the airport in Doha. The taxi ride, getting a tiny glimpse at a new country and not feeling crappy at the airport thanks to no sleep made it totally worth it. If we needed any more reassurance we only needed to look at these guys trying to sleep on the floor to know that we’d done the right thing.

*BOOK YOUR TRIP NOW TO SAVE TIME LATER*

If you liked this post, can you pin it?