If you’re younger than 31, it sounds old right?

And I’m guessing that anyone older is screaming, ‘but you’re still young!’ Like I do when I read those hipsters moaning about being 23 in the likes of Vice Magazine. But it’s all relative right?

Fact is, at 31, middle age is just a few birthday candles away. I can feel myself getting older. See it. In some photos I’m shocked by my face when I’m papped by others, not ready with the usual and oh so annoying ‘social media gasp’. I can’t help myself but do it. I’m just not a pouter.

It’s rare that you see your face in its normal state, you’re usually brushing your teeth, putting on make up or changing your natural expression for a photo. I’ve always found it weird that you never really know what you look like, even a camera changes it in some way. And when friends exclaim with reassurance that ‘you just look like you!’ when you express negativity about a particular photo, I’m always left thinking ‘yikes, do I?’ And feel the need to apologise to anyone who’s had to look at me for any amount of time.

I look in the mirror today and lines are appearing by my eyes, I have these weird silver hairs in my brows (quite fond of them though) and even my skin texture is changing. That foundation just doesn’t sit like it used to.

Sometimes when I meet up with friends, I can’t help but notice how they’ve aged, seeing as it’s usually been a year or two, and possibly a baby or three, since I’ve seen them anyway. Their teeth have changed, their face, their profile – they look different – and I’ve no doubt they must be thinking the same about me.

But no one would ever be honest with you regarding how, would they? They might not even know. We just look, older.

I’m holding onto the fact that photographers have long known that it’s wrinkles that give a face character and reveal a life that’s been lived. Isn’t it a sad thought though, that most people don’t like their laughter lines? Wishing all those years of faces wrinkled with joy away, so that instead they could have the uneventful face of youth.

It’s not just the physical side of getting older that’s starting to show, but most worryingly for me is what it means to those I love too. My friends’ problems are bigger now – not just work and guys – but births, deaths, marriage, divorce and debt. My parents are in pain from various ailments, summed up by the simple ‘getting old’, while a few older friends’ parents are suffering, or have suffered, with MND, cancer, dementia or any one of the many other horrible illnesses ready to get us as the birthdays pass.

Women ageing in the media At 31, almost 32, I’m all the more conscious that the media and advertising surrounds us with women younger than me, now. More successful, supposedly happier, thinner, prettier, practically perfect – well, thanks to the Photoshop – and very rarely older than 30. Men are allowed to get older gracefully in the media, their lines and greying hair are deemed attractive (‘silver fox’), while women disappear. The ones that do manage to stay in the public eye stay are reminded every day in some way that they’re getting older, and (inevitably) look older too. If they try to change it, with a new look or surgery to give in to the unwanted pressure, they’re ridiculed.

The prime example being Saturday night TV in the UK. Our most popular channels are currently showing Strictly Come Dancing and The X Factor – where the men are allowed to age like a fine wine, while the women are either half their years or have a faceful of surgery. I know I put myself out there online, ‘in the media’ and under the scrutiny, but getting older has actually made me all the more determined to. To not let the general female travel blogger profile be another 20-year-old looking beautiful, holding onto her hat for Instagram, somewhere around the world. You won’t find me editing wrinkles or chins out with apps, I don’t know how to and I wouldn’t want to deceive you anyway.

I went to a YouTube conference recently, where my 30ish-year-old friends and I were definitely in the oldest 10% in the building, if not 5. One of the YouTube staff up on stage told us that if we were over 24 then we were old on YouTube, and would have a lot of difficulty attracting an audience.

After the talk my friends and I joked how on The X Factor we’d be in that Overs category (over 28s apparently), pleading for our ‘last chance to make something of ourselves’. It was funny at the time, but it’s actually really sad. Why do humans have to have an expiry date now?

Expiry dates were a concept thought up by Marks and Spencer’s in the 1970s to make people buy more food. If you’re only happy with something for a limited period, then it gives marketers and the media more chance to sell you something more when that time is up.

As humans, and there’s no doubt it applies more to women, are only ‘in date’ from around 18-25, and everyone else wants to be in that age group, then you can sell them the dream of being in that age group via beauty, fitness, fashion, food and everything else.

There are a lot more people waiting to get in, and being churned out the other side, than actually in it, creating a whole market of people desperate to be older, or younger, by any means possible.

So it makes sense, as marketers and the media, to make everyone else feel bad in themselves, so they need their product to feel better. Get it?

We need a revolt.

The future and getting even older 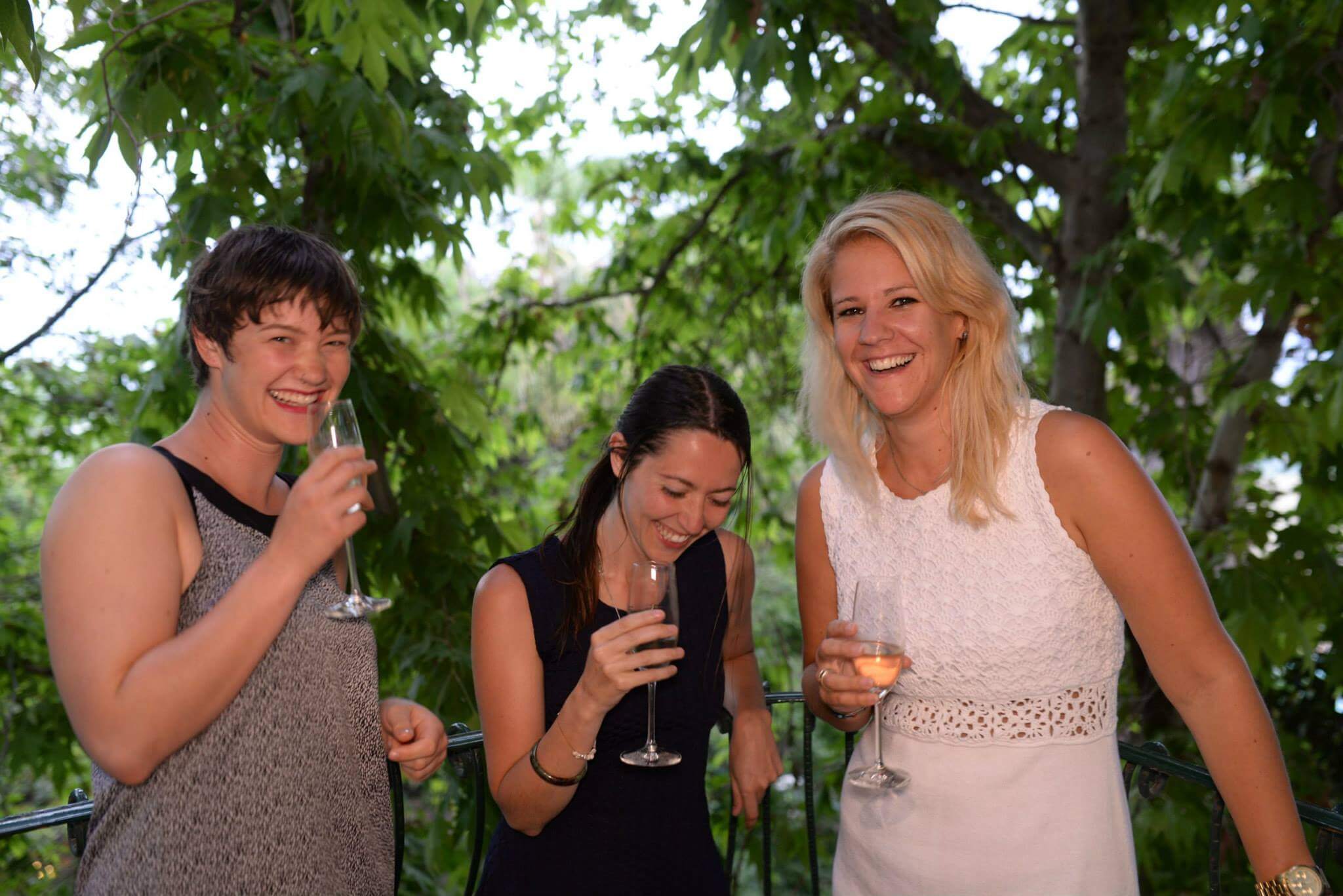 I’ve found myself looking around at people older than me and working out where I want to be in the next few years. Now that I apparently can’t be a YouTube sensation, or win a TV talent show, how do I want my life to pan out?

I know I live a very different life to most of my friends, the non-travel blogger ones anyway, and these last few weeks I’ve noticed it even more. My friends have grown up, they’ve got houses, marriages, babies, are moving up in their jobs, have dishwashers and cars and apple trees in their gardens and spare rooms and fully stocked fridges. It’s made me realise that at some point in the future I do want all that stuff, or some of it anyway.

I’m living a dream life but dreams shift. I need to lay the foundations now for the life I want to live when I’m older. As I look for inspiration from my parents and friends’ parents to see whose good fortune in health and finance I want to emulate – much of it seems to be up to luck, rather than a conscious choice of investment in lifestyle or assets. Of being in the right place at the right time.

But as a 31 year old in 2016 we know more now. We shouldn’t smoke, shouldn’t drink, should eat salmon, quinoa, blueberries and use moisturiser twice daily. We need to invest in property, focus on experiences not possessions, think about pensions and put away for the future. We need to work hard now to reap the benefits in the future

Obviously I’ve got the ‘focus on experiences’ thing down, but if I want to work on all the other things I’ve listed I’m going to have to change my life over the next few months, and I’m ready for it.

Growing old is a privilege Growing old is a privilege, I absolutely believe that. It’s a privilege that’s been denied to too many of my friends. You only have to catch a snippet of the news to hear about more people, most heartbreakingly, innocent children, who will never know what it feels like to be a day older. To moan about aching bones, tired muscles or ‘things not being like they used to be’.

So it’s down to us, us 30+ year olds, to have the perspective and gratitude that I think is the key to a happy life. To accept that we are going to change, physically and mentally, and that those around us are going to change too. To show that as long as we all accept getting older together and support each other, getting older doesn’t have to be thwart with all the worries about ‘where you’ve reached in your career’, ‘in your love life’, ‘with your friends’. We don’t have to fear it.

I had a lot of fun in my twenties, but I’m done. I wouldn’t go back.

The media can try to make us 30+ lot feel bad, all those ‘things to do before your 30 lists’ can freak you out, ticking the next age box on any form is scary, and you and your mates might’ve put on a few pounds, but if we stick together, with our shared knowledge that a Saturday night in with a G+T is much more fun than shouting over music in the club it will make us a lot happier.

The 20 somethings can have their Snapchat, their crop tops, their millennial branding and all their insecurities, I’ll take my new interest in house prices and the laughter lines around my eyes, and a big fat slice of my 32nd birthday cake instead.

Is getting older something that bothers you? Any thoughts?