3 Months of Guns and America

In the last few days in the US I got totally paranoid. Basically I’d watched and read too much news and convinced myself that with its regularity, it was inevitable that I’d get caught in some sort of shoot out or crossfire at some point. I didn’t, obviously. And of course, it was extremely unlikely, but as you’re statistically 30 times more likely to get shot in the US than the UK, and the news stations are full of stories, I couldn’t help it being at the back of my mind.

I really enjoyed my three months in the USA but, mainly for the reasons below, I was definitely ready to come home. 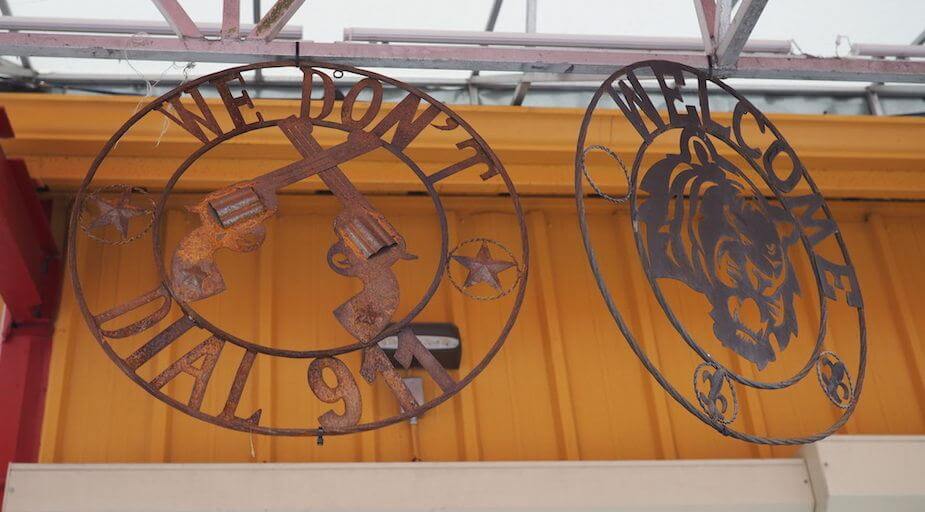 On the way home from the French Quarter Festival in New Orleans, an NFL football player, Will Smith, was shot because he bumped the car in front (a fender bender, as I learnt it was called here). The guy in front got out and fired at Smith after a brief argument. It went on to be more complicated than that (long, long story), but essentially a guy, a dad of three, was fatally shot in the back, and his wife in the legs.

When the police searched both cars, they found three guns between the two of them.

I was glued to the story. I guess because I was at the festival, because the media kept showing his last Instagram post which looked so innocent and because he was so lovely in the Steve Gleason film that had ripped my heart strings a few weeks before, at SXSW. The shooting happened just up the road from the first hotel I’d stayed at in New Orleans, and right outside a café I’d worked on the blog in for three days.

Two nights later I didn’t want to walk down a certain street as it looked sketchy and I was on edge, and my Canadian friend, Cailin, who gets American news said that kind of stuff is in the news all the time, ‘don’t worry’. We went into a shop to buy a drink and the news channel they had on showed scenes of a shooting in Baton Rouge, where we were going next.

It was too much.

I know Facebook has some sort of algorithm that knows where you’ve been, but it felt like every time I’d leave a place my ‘trending topics’ would bring up a shooting there.

I left Austin, after working at the University of Texas the day before, at a desk outside on the grounds. A few days later I read about a female student, Haruka Weiser, who was murdered in the grounds by a ‘homeless teenager’ on campus. She died from strangulation, and he had a gun.

“It’s legal to sell a rifle to a 16-year-old in Maine, Alaska, Minnesota or New York. In Montana, the legal age is 14.” – Law Center to Prevent Gun Violence

The Friday I was in Chicago, it was the start of Memorial Weekend. I went on to Minneapolis early on the Saturday morning but a total of 69 people were shot that weekend, 69!

“Thirty people will be shot dead in America today” – The Guardian

When I got to Minneapolis someone mentioned that no one ever got shot here and it was a peaceful place. Then on the Sunday I was there 4 people were shot. A quick Google search tells me that people definitely do get shot in Minneapolis.

“The US has more guns per person than any other country in the world.” – The Guardian

And then there was that guy in New Orleans who asked me and my friends for some money. We refused and he responded angrily by raising his voice, bringing his hands up and shouting “This is why I have to get a gun and rob people!”

There was more, but you get my point.

You can see the limited stats for how many people die every day in the USA from shooting here, although they do state that they limit the results to the general public (!).

“Today, at almost 140,000, there are about 10 times more federally licensed sellers in the US than there are McDonald’s.”

Guns as self defence

I met a lady at the fitness spa I was at, lovely woman, who happened to mention she had a gun in her car. She said she hoped she never had to bring it out but she has it for self defence and knows exactly how to use it. I mentioned this to another lady I’d made friends with and she told me her and her husband’s ‘new thing’ was shooting at the gun range.

It just felt weird to think of these ladies, who were like my mum’s friends, as having a gun and being prepared to use it. And feeling like they needed it.

“The US is the only country that relaxes gun laws after a massacre. In the 18 months before Sandy Hook, there were 17 gun deaths in US schools. In 18 months following Sandy Hook, 41 deaths were reported.” (after they were relaxed) – The Guardian 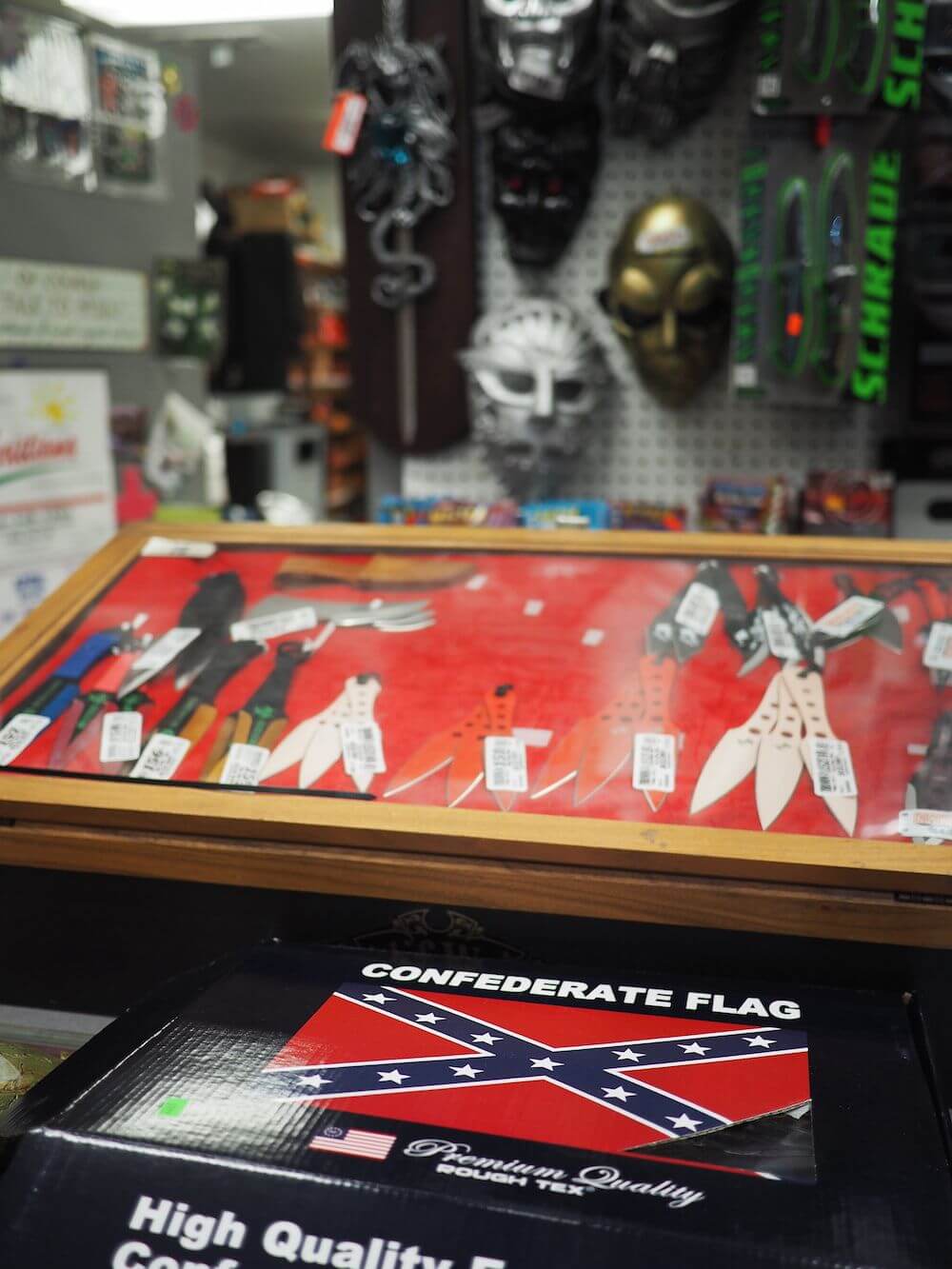 – Another creepy photo from the gas station

It’s not just the pointless deaths thanks to having a deadly weapon at hand in the heat of a moment. Every day people die in the US from accidental shootings, usually because the person in charge of the gun hasn’t secured it properly. Did you ever hear about that 2-year-old kid in Walmart who reached into his mum’s bag in the trolley and shot her in the head?

In 2015 at least 265 kids under 18 accidentally shot themselves or someone else with a gun (Washington Post). Reading through the examples of siblings killing each one another, friends, step siblings and children accidentally shooting their parents is pretty harrowing.

“American children are sixteen times more likely to be killed in unintentional shootings than their peers in other high-income countries.” – Everytownresearch.org

There have been seven school shootings so far this year in the USA. More than one a month, that’s just normal. A regular expectation when you go off to school in the morning that you might get shot at.

And what does old Trump have to say about that, seeing as he seems to be the centre of everything right now?

“I will get rid of gun-free zones on schools, and — you have to — and on military bases,” Trump said. “My first day, it gets signed, okay? My first day. There’s no more gun-free zones.” – ontheissues.org

Apparently so the kids can shoot back when it happens.

[Talking about a recent school shooting] … “it would have been a lot better had people had guns because they could fire back.” –Donald Trump, ontheissues.org

Laws across the state are crazy. Here are just three examples…

– There are 20 states in the USA where an 8 year old can both legally buy a shotgun and possess it.

– In Vermont a 16-year-old can’t legally go to an R-rated movie alone or join the military, but he can buy a handgun and carry it with him.

As much as I’ve tried to ignore the news here, I’ve become kind of addicted to it at the same time, it’s just so unbelievable. I’ve tried to reason that most of the people who get caught up in gunfire are involved in something, although there have definitely been a few people in the crossfire in the news while I’ve been here. And as much as that reasoning helps me, it doesn’t really help them at all.

READ: So, America, this is how you do gun control

And then since writing this last week America’s worst mass shooting of all time was carried out by a guy who apparently ‘didn’t like seeing two guys kissing’, so fatally shot over 50 people in a gay club in Orlando. He was known to the authorities and even investigated in the past, but was still allowed to buy a gun perfectly legally.

And the popstar Grimmie was fatally shot at an autograph signing by a guy who then shot himself.

Obama calls for better gun control, and Trump repeats his call for a ban on Muslims.

Hostels in Austin: HK Austin, Drifter Jack's or Hostel International?
What’s in Minnesota for YOU?

My Big Day Out at Daytona International Speedway

My Stay at The Oak Alley Plantation in Louisiana

Breakfast at The Oxford Exchange in Tampa

What to Expect from SXSW if You're Planning for Next Year