Bo-Kaap, Cape Town, where the houses are bright, the streets cobbled and the community Malay. Although according to my host Zainie, who gave me a glimpse into life in Bo-Kaap, not so much anymore, but we’ll get onto that. For now, admire these awesome photos of Bo-Kaap as I saw it back in September when I visited Cape Town… 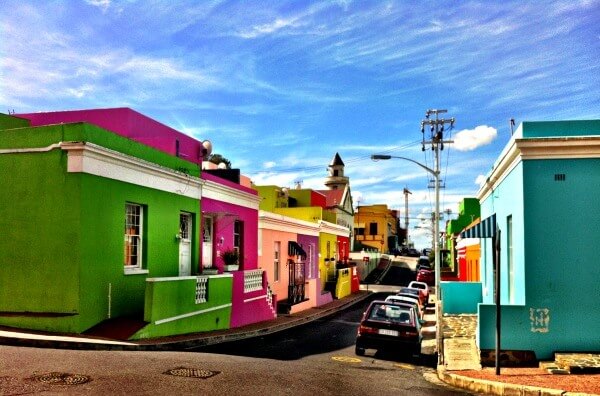 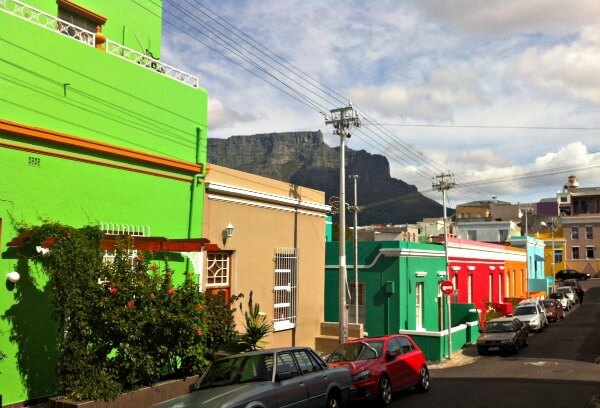 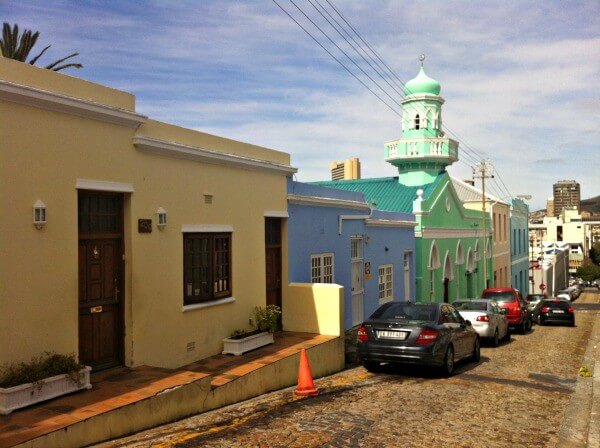 I was in Bo-Kaap for a specific reason: to eat. I’d been invited to Zainie’s house to sample her Malay-style cooking. Zainie is a well-known local chef who hosts lunches, dinners and cooking classes in her Bo-Kaap home. I was there with 1o or so others, who all worked for a hotel chain across Africa as chefs – so the pressure was on for Zainie.

The table was set in her little sun trap of a garden. The sunlight reflected off the walls and it was the perfect spot for a friendly chat over some tasty scram. In that two hours my fellow eating companions taught me more about Mozambique, Zambia and Zimbabwe than I’ve ever known – that in itself was worth the journey. All three are now firmly on my must-see countries list, but anyway back to the cooking… We had a lamb jambalaya, fresh avo salad, buttery chicken curry, incredible naan bread, fried veggies and a range of sauces. I literally couldn’t eat enough. Everyone was being polite at first and sharing the food around, but as soon as we realised there were plenty more bowls of everything to come, we feasted. You could’ve rolled me out of there, I tell you.

This guy ate SIX of these koeksisters – a syrupy donut-like dumpling spiced with cinnamon and ginger – I managed one. They were so delicious, but so, so rich. 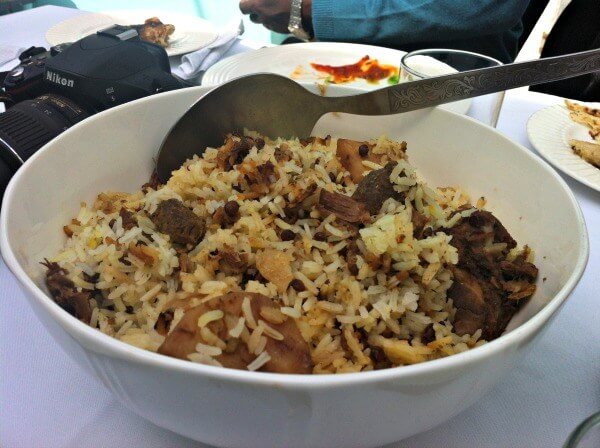 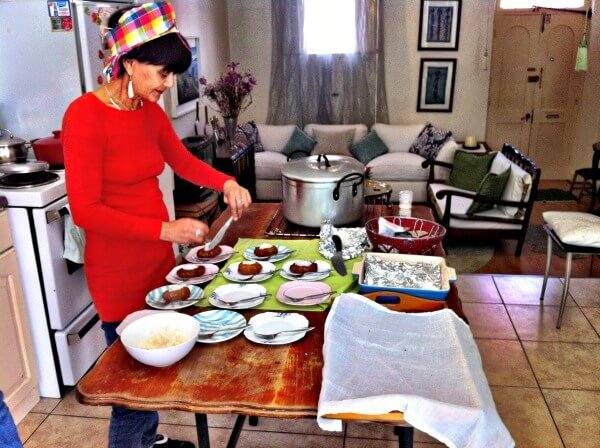 After the meal the group went on to their next stop while I stayed behind to go on a tour with Zainie. After a quick clean up with her nephew and niece who help her out with the serving, she took me around her neighbourhood.

“They took away my mountain,” she told me sadly.

When you looked up from her front door all you could see was a generic tower, looming over the Bo-Kaap putting it firmly in the shade. Once upon a time, she told me, she’d been able to see Table Mountain from her doorstep. She went on to tell me how businesses like the idea of being in Bo-Kaap but the little houses don’t suit their needs, so they build more, pushing the district back and soon she predicts, the original houses will be gone, replaced by modern replicas in the same spot.

Zainie explained with regret how hard it is to get anything done with the council, now that she only had businesses for neighbours. The didn’t care about the broken cobbles, the litter issues or cracks rising up from the ground through the walls of the houses thanks to the army of tour buses that parade through every day. All they wanted was the sought after address. 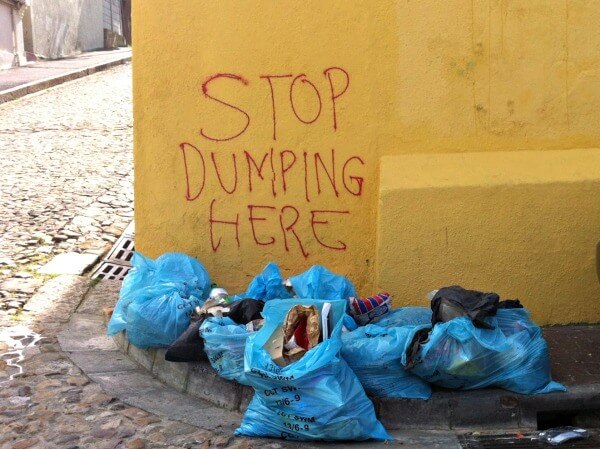 She took me to the Malay museum and explained how during apartheid the Malay slaves originally painted their little houses in protest at being made to live there, it was regarded as a poor part of town. Nowadays the houses can fetch millions. We stopped to look in the local estate agents window and the ads backed up her claims. The position in the town is top, literally. Bo-Kaap is settled at the bottom of the gradient as it goes into Signal Hill. Bo-Kaap is traditionally a Muslim area – home to South Africa’s first mosque to prove it – although today it would be better described as multicultural. Many of the old-skool Bo-Kaap residents are descendants of the slaves from Malaysia, Indonesia and Africa, imported to the Cape of Good Hope by the Dutch during the 17th and 18th centuries.

Zainie was an informative and passionate host. She took my arm as we went round, pointing out places of interest, her friends and gossiping about the locals. She was open and friendly and I wished we could’ve hung out longer, but I needed to go. We went back to her house to pick up my bag and I saw her international cuttings stuck to the fridge – she’s definitely making a name for herself, and judging by both her cooking and personality, she deserves it. If you’re looking for cool things to do in Cape Town, a day trip to get a glimpse into life in Bo-Kaap is definitely recommended. You could take a cooking course, stay in one of the houses for the night, take a walking tour or just eat in one of the many local restaurants. You should look Zainie up, she could sort you out with all of the above in one fell swoop.

Just tell her I sent you… 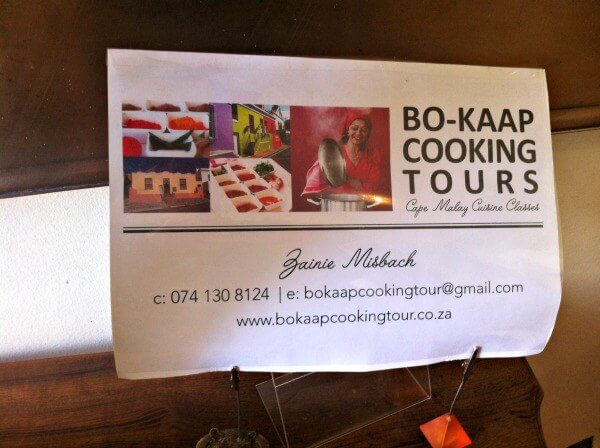 […] A Glimpse into Life in Bo-Kaap, Cape Town (vickyflipfloptravels.com) […]

[…] A Glimpse into Life in Bo-Kaap, Cape Town (vickyflipfloptravels.com) […]

So vivid, so different from any other city. I just love cape town!

Yeah, it was pretty awesome there! Definitely worth a look if you're in Cape Town. It's easy to get to and you could spend anything from ten minutes to ten years getting to know it.