Why Does Everyone Love Iceland So Much?

I’ve never heard a bad word about Iceland – well, maybe about the price of a pint, or from my mum when she talks about how snowy the roads were. When my family went, in January 2014, a driver coming the other way told us to turn around as we wouldn’t get through thanks to the heavy snowfall in the countryside.

Since I went, for those four blustery snowy days, I’ve been desperate to go back (although, not in a January). And so it seems, is everyone else who’s ever been.

What is the obsession with Iceland? 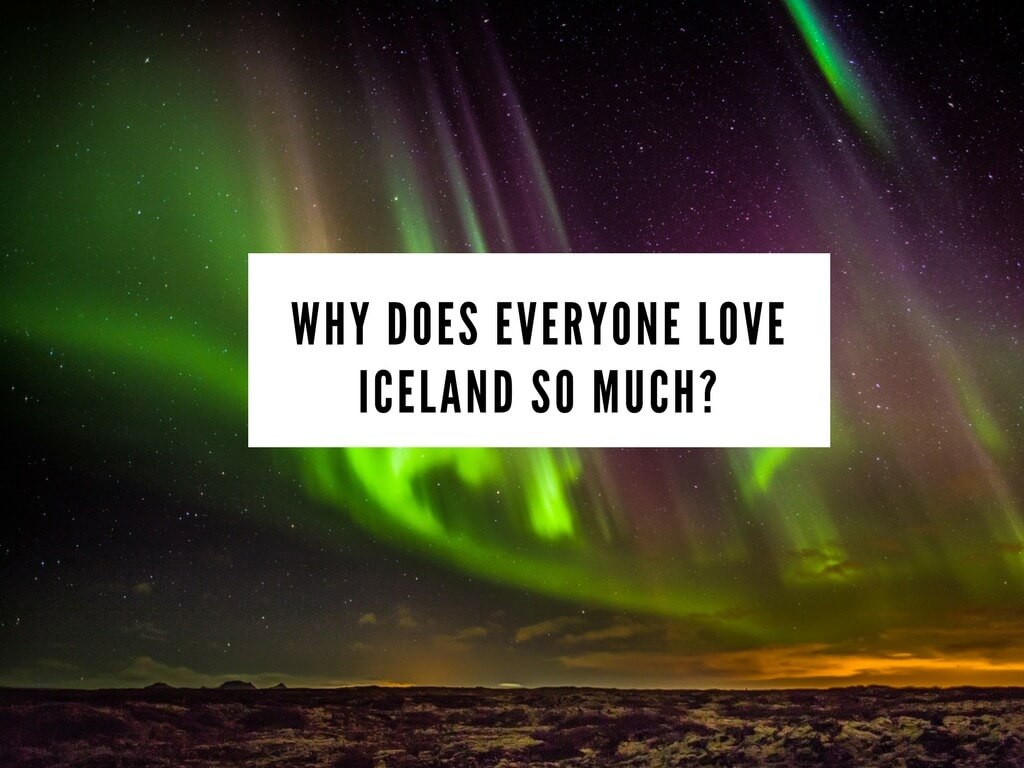 Ar, there’s just something about it. It’s so raw – even with the snow cutting our road trip plans short it just felt so rustic and, y’know, we were at the mercy of the elements. Thanks to the size of the island you’re only ever a few miles from a volcano, or a waterfall, or even a beach. Whether it’s bright sunshine, angry skies, snowy days, or blustery winds, nature is there, in your face, reddening it from either the heat or cold.

The main attraction, the Golden Circle, looks and feels like something made up from a fantasy story. With craters, geysers, waterfalls and ponies dotting the vistas, if you’re driving you’ll want to go slow to take it all in.

Thanks to Iceland.is for all the photos – another reason why I need to go back, to get my own! We were in Iceland to try and see those elusive Northern Lights. We’d booked three nights in the countryside in an awesome house away from the lights of the Big City and had two nights before in Reykjavik. We had a nightly rota for people to watch the skies – to be honest convinced that as long as someone was there to tell everyone else, we’d see them. No luck.

The most we saw of them had been on the second night in Reykjavik. There was a green glimmer on the horizon reaching across the skies. We’d thought it was a pre cursor to the light show we were due to see, not the entirety. I’ve seen some incredible pictures of the lights – I want to see them for myself. The topography of Iceland has been likened to the moon. I mean, I’ve never actually been to the moon, but I can vouch for the crater like surface. Stunning, epic, eye watering, breath taking – all the words that are usually annoying hyperbole in travel writing, are totally valid when it comes to Iceland.

I love the musical side to Iceland, and the amount of artists that have come out of a relatively small and isolated island. Artists like Bjork, Asgeir, Gus Gus and Sigur Ros. I was obsessed with Asgeir’s album after seeing him live at Latitude Festival, in English. And then I heard it in Icelandic and just had to go and see him play it live. Incredible.

The Blue Lagoon though Ah you can’t go to Iceland without going to the Blue Lagoon. Just be warned – I wouldn’t recommend picking up the mud from the bottom of the lagoon and smearing it on your face. My brother did and ended up with someone else’s skanky plaster in amongst it all. You need to splash out for the proper stuff from the shop, not be tight like us.

Have you ever heard anyone speak Icelandic? Here’s a little video for you to hear the melody for yourself.

Next time I go to Iceland

I’m going to rent a motorhome thingy. This is a great way to save money as you go, both on bed and food. And means you can get to the hard to reach places. AND, if you get one with a window for a roof you’ll have a better chance of seeing the Northern Lights.

I’ll eat out more. We were a family on a budget with a super cool house in the countryside – apart from a meal in Reykjavik we ate at home. Not next time! I’ll be out like a right Timmy Trendy flashing the cash, hopefully. I’ll stay at one of the farm homes. To get a real taste of the culture of any country, you need to get out of the cities. Did you ever see that Rick Stein Long Weekends episode where he met some Icelandic people and they introduced him to lamb, which they told him after he’d bitten into it was cured in sheep poo? His face was brilliant. I’d love to stay with a real family up in the hills and see how they live their lives.

I want to see the black beaches. We tried. In fact my brother drove me and my cousin all the way down to Vik Beach from our countryside manor (kind of) and then when we got there we realised that we couldn’t see it, of course, the beach was covered in a layer of snow. The now white beach, surrounded by the volcanos, looked magic, but it wasn’t the black we’d come to gawp at.

I need to spend more time in Reykjavik. Looks like there are some really cool things happening in Reykjavik – from cool and cosy nights, to festivals, to new restaurants. I want to get involved!

READ MORE: And I need to do some of these day tours from Reykjavik recommended by Nina from whereintheworldisnina.com.

That’s why I want to go to Iceland Iceland intrigues me. I love the way over half of the nation genuinely believes elves live in the valleys, I love the extreme weathers, their reactions to world events and even the way their tourism agency handles their social media. Iceland is unapologetic, it can be brutal – as I realised when I got out the car to open the gate and nearly blew away in gale force winds.

There are no gimmicky attractions set up – the natural landscape is attraction enough. Iceland is the natural world at it’s most raw and fascinating, making it perfect for pictures, both in mind and on the memory card.

I mean, jeez, why aren’t I back there already? Anyone fancy a November jaunt to include Iceland Airwaves Festival?

How Much Does Four Days in Iceland Cost?

How to See the Grand Mosque on a 13-Hour Stopover at Abu Dhabi Airport
← Previous
My Mental Health as a Travel Blogger
Next →
Click here to cancel reply.

Wow! Your January has been utterly amazing! I cannot wait to see your house in Portsmouth when I'm down there in future! I'll bring a housewarming gift too!

I knew the hubby would have commented on this post. He'd love Iceland because he really enjoys photography and Iceland looks just beautiful. Maybe one day....

Ah I love that you both have your fitness blogs! Just been checking them both out. Those protein brownies look deelish. I'm trying to be healthier at the moment. It's only been a week so can't really report yet!

Ah you guys should go. Must be so many cool fitness trails and outdoor activities that'd be perfect for you guys. Move it to the top of your travel list!

Iceland looks like a wonderful place. I'm desperate to see the Northern Lights! In fact, they made an appearance in the North East of England only a few days ago. Unfortunately I didn't make it out with my camera but one day I hope to see them.

Ah that's a shame you didn't get to see them. Yeah I've seen some amazing pictures of them over England – maybe I don't need to go to Iceland after all :)

I've been to Iceland different times and love the Northern lights. Last time in November 2015 I went for the Northern lights and Iceland Airwaves. Airwaves was very good. The whole city was full of music. I was impressed by the organisation of the festival. They had a very good app where you had all places and artists listed and you could make your own schedule. Artists started on time so changing places to see different artists were not a problem. They had a lot of off-venues if you are travelling on a low budget. Just book as early as possible because the Iceland Airwaves got so big and popular in the last couple of years. I might go this year again and maybe we can have a little Vietnam reuinion :)

We saw the northern lights on 2 nights (out of 10), one time even during the festival in Reykjavik even with all the street lights on. There is no guaranty but we used the forecast (http://en.vedur.is/weather/forecasts/aurora/) which I found very helpful.

All trips and working time in Iceland together I've spent around 17 month in Iceland. I always encourage people to explore Iceland by hiking instead of just driving through it. You need to feel the rain, get almost blown away by the strong wind, breath the fresh air, see the wilderness, cross wild (and somethimes hot) rivers, smell geothermal areas, experience the joy of seeing a tree again after 3 days hiking through a stone dessert and of course enjoy a relaxing bath in a hot pot somewhere in nowhere. Try it and you will be rewarded of unique moments.

But there there are always two sides of every coin. More and more tourists going to Iceland (1,3 Million in 2015) and I am concerned that the Icelandic people will not be able to established a sustainable tourism in time. At my favourite place I saw already the first signs of all the tourists: wooden planks had been installed to protect the turf. I've also heard of protests in Reykjaivk about hotels and so called 'puffin stores' which are replacing clubs and shops. Icelandic students have big problems nowadays to get affordable room in Reykjavik because every room seems to be a guest room now. But that should not stopp you. Just keep that in mind while you are there.

PS: To see some of the places of trolls and elves I suggest to take that book on your journey: http://grapevine.is/culture/literature-and-poetry/book-review/2009/09/18/literature-book-review-a-travelers-guide-to-icelandic-folk-tales/

Hi Yvonne, thanks for your comment. I've learnt a lot! Oh that's interesting that they do an Off Airwaves. Tempting. Wow that must've been amazing to see the lights during the festival – think that would be the dream. So cool that you've spent that much time there. You must've seen all the different seasons at their best and worst. Nice tip on the hiking – what about cycling? Is that a done thing?

Yeah, I think tourism always has a destructive side. In a place as small as Iceland, where there's a definite route for tourists I guess it's hard for the government to keep the sights protected, but also to keep them in their natural state, without having to adhere to health and safety etc. I think this is happening to lots of places as people are travelling more and want to go to interesting places like Iceland. I hope there are lots of plans in place to stop any unnecessary destruction, and I hope the tourists acknowledge and act on their part in the protection too. Next time I go to Iceland I'll make sure to take that book with me.

Thanks for recommending it :)

Well I saw the northern lights and I was with you.... ok they may not have been dancing but they were there, It was all magical and the trip amazing and wild ... but the Snow... It was dangerous ... and we were innocents to the Danger.

Vicky's Mum, your first comment! Yes, we were innocents to the danger weren't we? Poor little village people not ready for such wildness. We saw a flicker of Northern Lights, you're right. But next time we go I'd like to see them dance.