Invite to Snoop Round a Russian’s Home in Goritsy

We saw this house and like Hansel and Gretel drawn to the witch’s gingerbread walls, we wanted to see more. The man at the door beckoned us in when he saw us snapping away with our cameras. In Goritsy, Russia, looking round a local’s home is a ‘thing to do’. There’s not much in Goritsy, but it’s a popular spot for cruise ships to dock in on the canal between Moscow and St Petersburg, and so entrepreneurial locals have opened their doors for a few rubles. In this case it was 50 each – just 60p.

The colourful homes here look fresh off a chocolate box, but it was this one in particular that caught my eye enough to follow his beckoning call. I was with my new friend Jenny and when we were stood in his front room, we realised we’d just followed a Russian man into his home just because we liked the décor. We pretty much were Hansel and Gretel, in a way.

There were three rooms in the house – a lounge with a bed, a bedroom, and a streamlined kitchen. He proudly showed us his ‘central heating’, a flume in the centre of the house fired by logs in the winter. He couldn’t speak any English, we couldn’t speak any Russian, but I like to think we had a good understanding of each other. He explained, in Russian and helpfully acting it out at the same time, that when it was cold in the winter they crawled into the alcove behind the stove to keep warm.

According to my Google search the January temperatures dip to -10C round these parts. He demonstrated how he got water from the sink using a pump and pull method, and then how he used it in his cooking. I never thought to ask where the toilet was, or possibly more interestingly, how it works. He showed us his wooden handicrafts – featuring the face of a gnome, which according to popular folklore is good luck in Goritsy – and he was selling them. The gnome’s cheery face was everywhere in his house, and even decorated every spike on his garden fence. Unfortunately anything that I buy would be spending the next month with me on my travels, and I’m all good for tree shapes carved out of wood right now. He seemed very proud of his boy band poster you can see behind us above, although I didn’t quite understand the story behind it when he explained. Religious artefacts were spread out on every wall and surface, this was a devout man. I love all the businesses that start up under the umbrella term of a ‘shared economy’, and this is one of the best and most authentic. If ever you happen to be in Goritsy in Russia and have a spare few rubles, I’d definitely recommend you to check out our new friend’s home.

I was in Goritsy as a guest of Gvidon Tours, the cruise company. I’ve been cruising from Moscow to St Petersburg aboard the Rachmaninov ship. Goritsy was a stop to check out the monastery, but I wanted to see how the locals lived. All opinions are mine.

Recommended houses to see in Goritsy 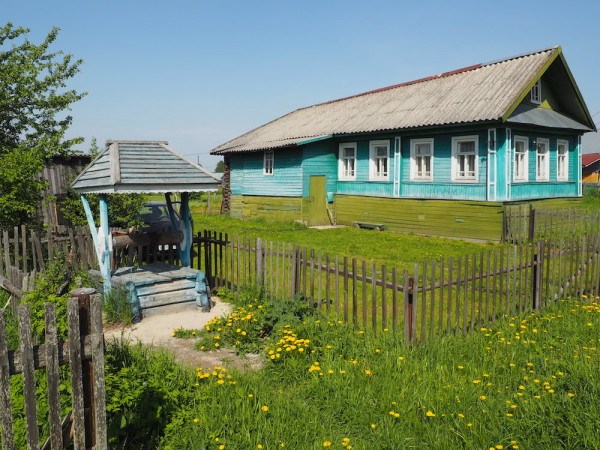 Would you go in?

Backpacking in Vietnam: Everything You Need to Know

52 Coolest Things to Do in Kyoto

Where to Go in Vietnam