The best way to learn Mandarin is to visit Taroko Gorge on an all-Taiwanese day trip. That’s obviously what the Irish hostel worker who sold me the ticket thought anyway. Despite specifically asking him if it was in English (‘yeah, course’) or for old people (‘ha, no’) it turned out he’d got his answers muddled up.

Before knowing this I was up for the 8am pick up excited to visit the Taroko Gorge I’d heard so much about. A super plush car arrived and I was ‘treated’ to a mad rush round Hualien to find the other three passengers at various hotels in the city. Come 9am and my enthusiasm was wavering as we were dropped at the bus for the hour trip out to the gorge. As I walked up the aisle to claim the last seat at the back of the bus I clocked that it was strictly Taiwanese families and old people that filled the other seats. Not that there’s anything wrong with that, of course, I’m in Taiwan. But y’know, just thought that seeing as I was the only person in my hostel it’d be nice to have a friend on the tour.

Ten minutes in and despite telling me he’d translate I hadn’t picked up a word of our tour leader’s shouting over the mike. Earphones in. Sixty minutes passed with the rest of the coach laughing at his jokes, passing round photos and generally having a lovely old time. As we were slowing to stop he came up to me, face inches from mine, shoved the photos in my hand and then started speaking loudly and aggressively with a few words of scattered English. I think this was his way of combining the last 60 minutes of Taiwanese into English. I just nodded, sometimes it’s easier. I felt like I was being told off. His aggressive manner to me didn’t stop. He seemed to have some issue with the coat I was wearing and kept telling me I’d need a better one to go in the waterfall. No one else even had one on and after he started shouting something about my shoes (hiking boots) I noted other people were wearing heels. Again, I felt like I was back in school and getting told off for the Ellesse trainers I always used to wear.

Another one of his ‘quirks’ was to get too close, again and hawk at me that I need to take ‘a postcard’ of a particular view. As you can see from all these photos, I took a lot of ‘postcards’. I don’t need anyone to tell me to do it. The Taroko Gorge is just something else too – I wanted to take in my surroundings and not see them through a lens. I knew that when I got home the photos wouldn’t do it justice and I wanted to remember what it looked like when I was there. This obviously wasn’t good enough for him though. In the end I had a grumpy teenager reaction and responded with a moany ‘I’m taking them!’ It made me not want to take photos just to spite him, but then I knew I was being ridiculous, obviously. His colleague, the bus driver who was bringing up the rear, actually grabbed my elbow at one point and shone his torch in my face and then at a rock telling me something in Mandarin. I’d already told them I didn’t understand the language, I had no idea what I was looking at and I didn’t really care either. I just wanted to see the gorge in my own time and away from them. 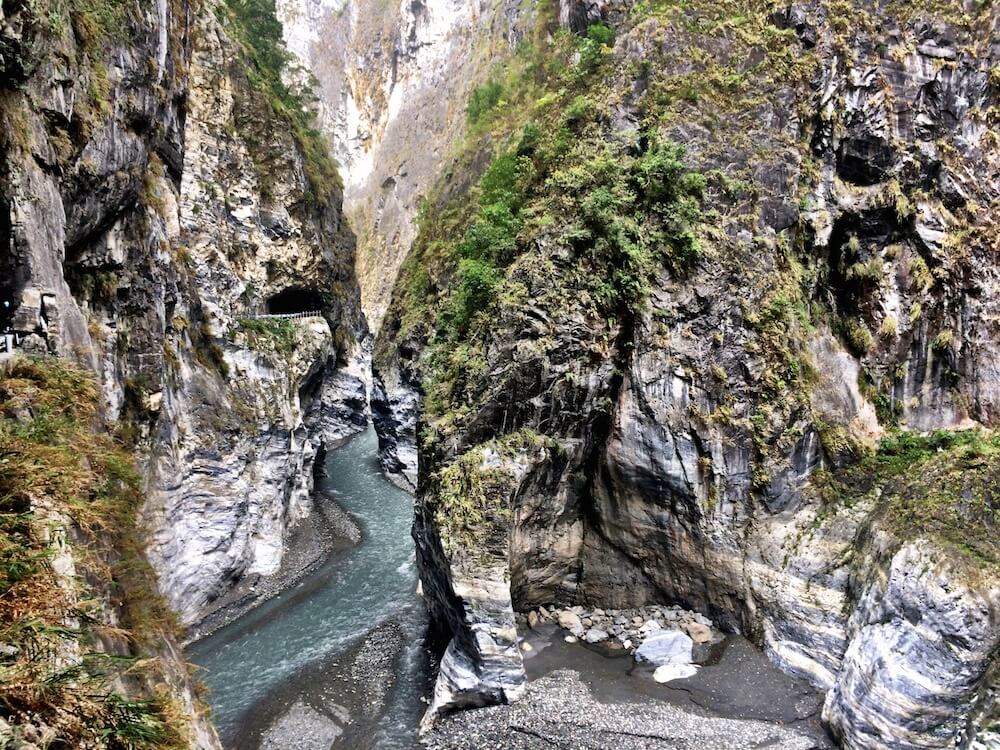 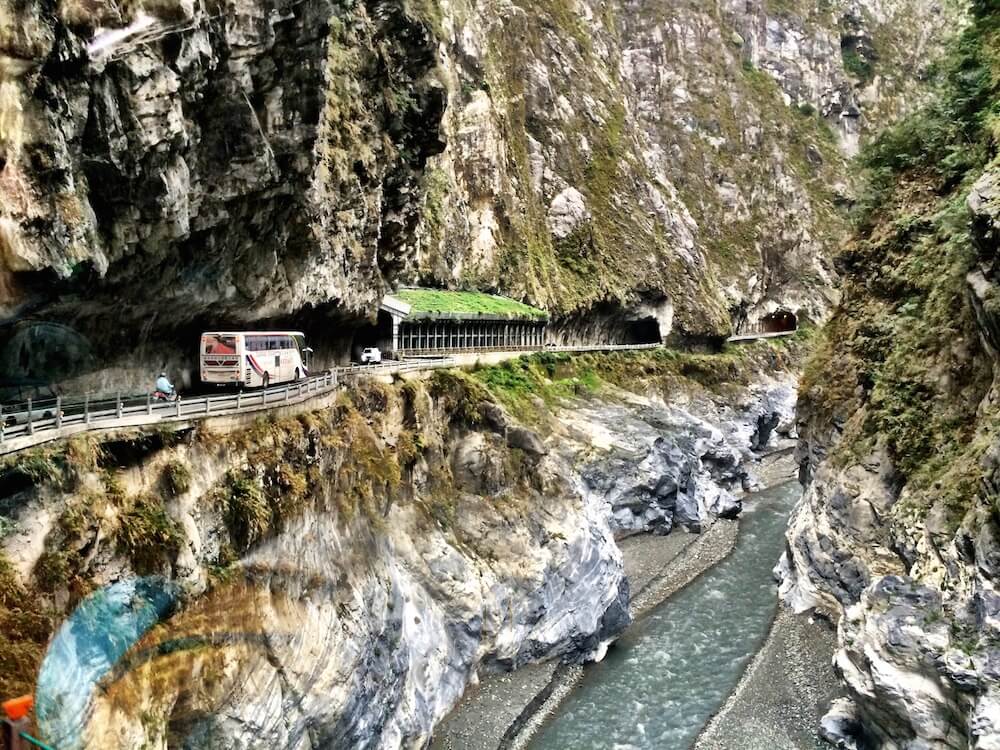 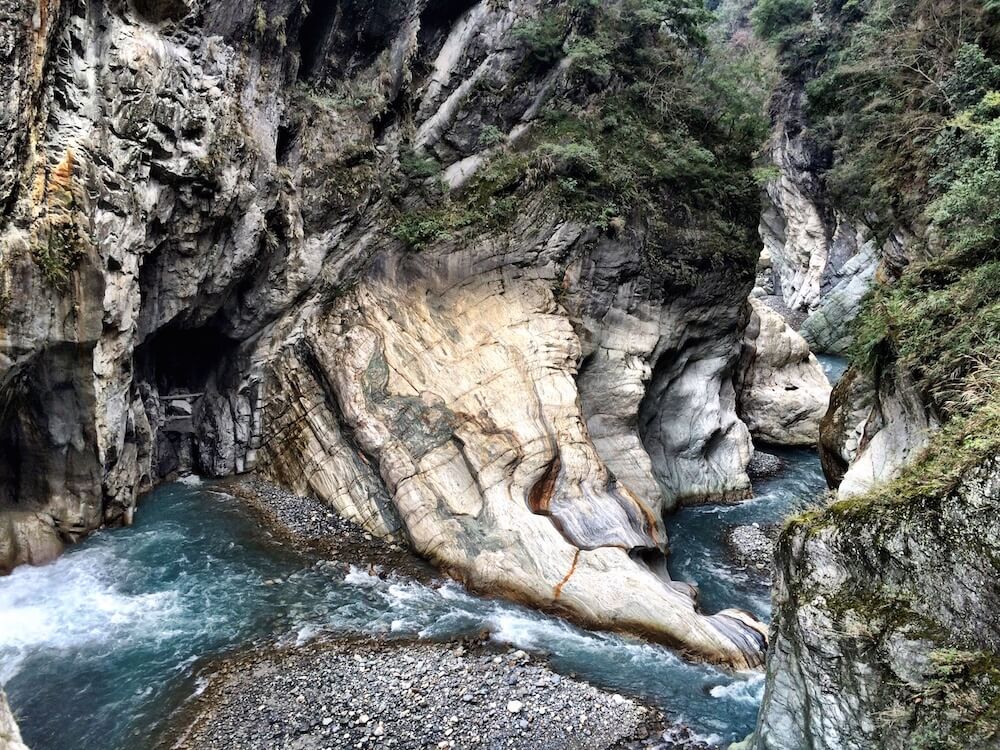 If you’ve seen Sound of Music you’ll understand what I mean when I say I side with Maria and I do NOT like being called with a whistle. Especially when it’s as piercing as my Taroko Gorge tour leader’s.

Every five minutes his whistle would break through the natural silence of the gorge so he could tell us about falling rocks or point to some residue on a rock. The falling rocks were the one thing I did understand – huge signs were everywhere warning of the danger – it was the jokes I wanted to hear, or nothing. The tour took us to four different points around the gorge – you’d have to spend a few days here to see it all, but it was a good introduction. The night before I’d just happened to come across an article stating that the Taroko Gorge road was one of the most dangerous in the world, so the bus’s 5 point turn inches from a precipice was another highlight of the day. 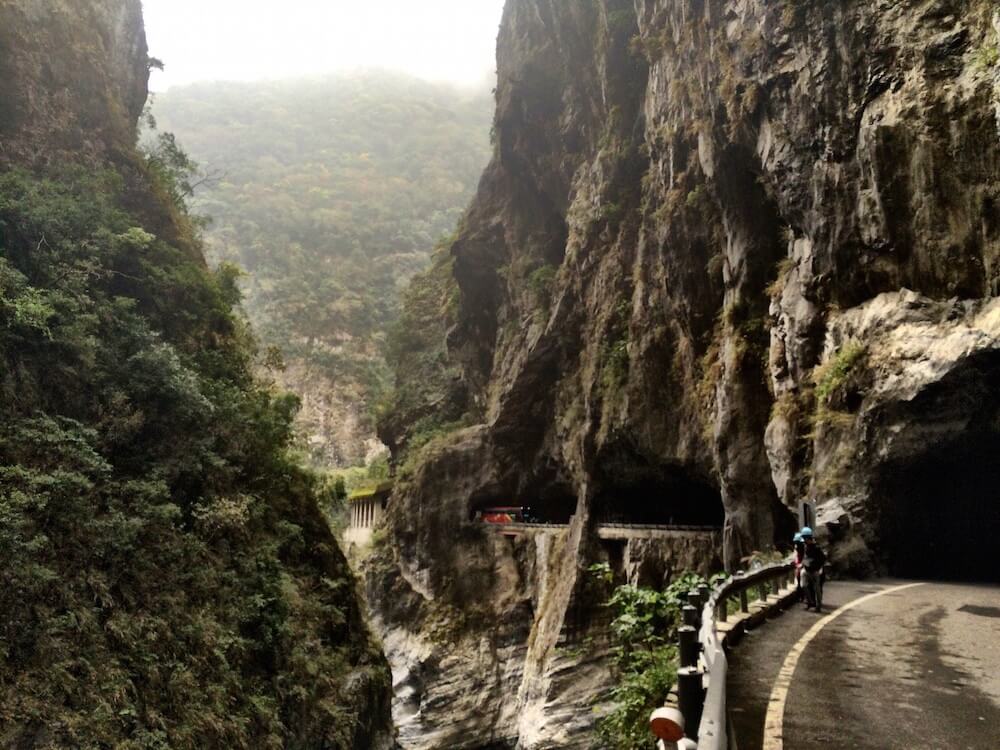 For the first hour or so I was annoyed at my hostel worker for not telling me the truth straight up and obviously just wanting to take my dollars. As the vast beauty of Taroko Gorge got to me and softened my irritation I thought about what it would be like taking 40 people round a rocky gorge, over precipices and past loose falling rocks. I thought about the tour leader having fun with 39 new Taiwanese friends and then having 1 errant Westerner without a word of Mandarin wandering off.

He was obviously passionate about the gorge but didn’t have the English to articulate it to me, so instead decided to use his whistling skills and torch to communicate. As we travelled past the public bus I thought about me being stranded out here having got the bus timetable wrong, which would definitely happen, and decided that I could put up with his tour leading tactics for the benefits of carted around all day. By the time I’d enjoyed my lunch with a really friendly family from Shanghai I knew I’d done a good thing. A few piercing whistles rattling round the air space between my ears, a Taiwanese tour leader’s breath in my face and torch in my eyes was worth it to see these incredible views with ease from under the safety of a free hard hat.