I was commissioned to make a film for my YouTube for TransferWise – ‘the clever new way to beat bank fees’. Yep, fancy. Of course I took it on, thinking although I only have 11 YouTube videos so far, everything would be ok on the day(s). I’ve never made a video with the pressure of it being for a company, freelance style. And I felt it. I flew out to Las Palmas, Gran Canaria, to the November sun (33C) and the fun of experiencing the world’s first digital nomad cruise leaving the port. My task was to interview my favourite digital nomads, those I met in Tarifa, some from the DNX Berlin conference and some new ones that were there for the whole digital nomad experience.

So during the week I was casting director, director, location manager, make up, costume, camera operator, lighting technician, sound boss, editor and interviewer. Some roles I did better in than others, but as my first time on such a big project I’m pretty happy with how much I learned, and the final video (treat for you at the end).

As I went along I kept a note of what I would do differently next time, to ensure I get better at making videos for next time.

I have no regrets, it was a huge lesson in how much goes into making a video. As I sat on the plane on the way home – my laptop battery ran out after 3 hours, apparently iMovie sucks it up fast, another lesson learnt – I decided to make a list of video creating lessons I’ve learned for the future.

I’m not saying I’m an expert, but I did put together an 18-minute video in a week – from finding interviewees to the almost final edit – you may only realise how much work that is when you try to do it for yourself. 1. Don’t give your camera to anyone. As I said, I was there to film the digital nomads going on the cruise. I thought it would be a good idea to actually get some footage on the boat, obviously. Unfortunately I wasn’t even allowed in the port, never mind on the boat. So, in my panic, I gave it to one of my friends to film on the boat. I didn’t see the camera again for three hours missing all the daylight at a time when it gets dark at 6pm. I was so stupid.

2. Check legalities of your plans. See story above – now I think about it, of course I wouldn’t be allowed on the boat. I didn’t realise my camera would still pick up sound as well as the mike and some fool talking all the way through one of my interviews totally ruined it. It was the best interview I got and I couldn’t use any of it in the final cut.

4. Know your limitations. I was stunted in how much I could film at night because although the flash worked with photo, no such luck with video. I’ve never tried to film at night before with that camera and didn’t realise.

5. Use everything available to you. My camera, the Olympus PEN EPL7 has a Wi-Fi connection where I can see myself how it is on the camera. It’s not very reliable and a bit of a faff but it could’ve saved the shot you’ll see with my friend Alysa, which, as soon as I got into shot blurred to readjust the focus. 6. Know your shot width. In one of the interviews (that didn’t make the cut) you can totally see me holding the microphone. Oops.

7. Get spare batteries. I did try to track one down before I left but no avail. And of course, the camera ran out at a key moment when the night before the digital nomad cruise the party turned into a pool party. Probably for the best to be honest, to save a whole bunch of embarrassment, but still annoying.

8. Keep your memory in mind. One of my memory cards ran out before the interview was finished. Devastated. Luckily I was with my friend so I could ask her to go again but that was when some other nomads talked all the way through it. I’d carefully bought three memory cards so this wouldn’t happen, but I had my mind on so many things I forgot to change it. 9. Double confirm meeting times. I had a lot of issues meeting up with people. Apparently Panier Granier is a chain, not just the one as my friend suggested, another interviewee went totally awol and had me running around Las Palmas and another I didn’t read the address right and couldn’t find their blummin front door.

10. Start early. For some reason on day one I decided that seeing as my first interview was at 10am that would be what time I’d start. Silly me. That’s at least two hours wasted where I could’ve been shooting the scenery or pieces to camera while it was still light. Start as early as possible.

11. Don’t waste time in restaurants. If you’re in a rush with your filming eating takes up a big portion of the day. By 4pmish on day one I hadn’t had any lunch and as soon as I sat down realised how knackered I was from chasing my interviewees around. I only meant to get something quick and charge my battery but ended up ordering food, spending 45 minutes in there and losing valuable daylight time. Get food on the go.

12. Work with a shot list. I did write out a shot list and had what I wanted in mind but then as the video went on I had too many good interviews that my shots of Las Palmas and the boat went out the window. When there are so many people involved it can be hard to plan, but I guess that’s where the skill lies. 13. Think about wind, about passing traffic, about other noise and light. So many of my shots are ruined by the wind. I now know I should’ve crowded the microphone so the wind didn’t travel through. I wanted to film outside to show the digital nomad life, but I didn’t realise how much it would affect it.

14. Don’t let anyone talk near you. I did ask some people to move, but I just didn’t realise the others were anywhere near us. I’m gutted that they’re on the soundtrack and it’s impossible to get rid of it, so that interview is ruined.

15. Know exactly where you’re going. I wanted to get some shots of another co working space in the Old Town and gave myself 30 minutes to find it before getting to the airport on time at 10am. The taxi dropped me off ten mins away because I couldn’t explain what I wanted in Spanish and he didn’t speak English. I was on the street, on the street, but I just couldn’t find it. I had to give up, it wasn’t worth missing my flight for.

16. Don’t attach anything to moveable things. We smashed a lantern. I’d attached the mike to it and then the wind started up and blew it over. I was pleased because the sound got better when we moved after, but still, we broke the hostel’s lantern. Not cool. 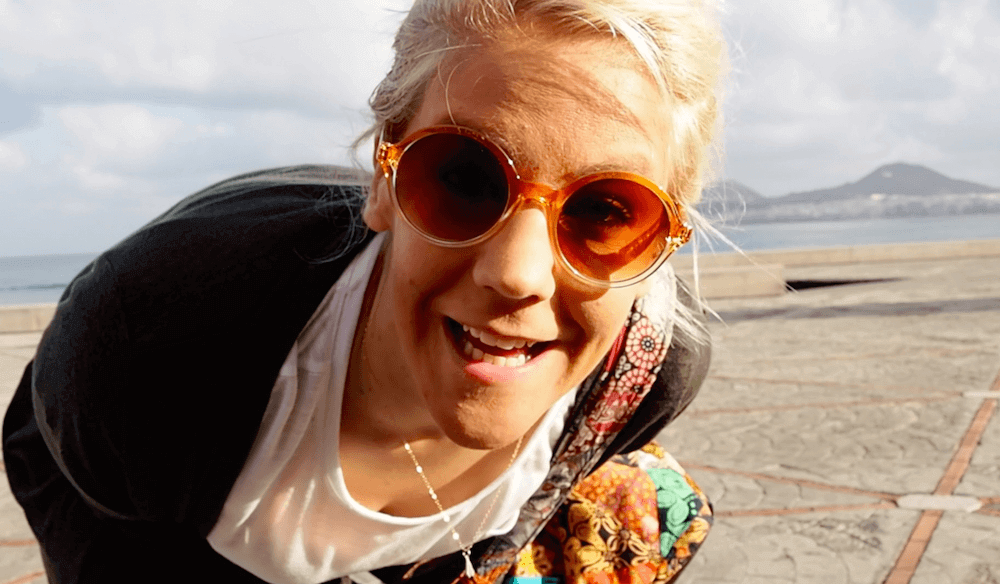 17. Plan what you’re going to look like the day before. I definitely didn’t put enough thought into this. I could’ve done with a haircut, more make up, some better clothes, nails done but I was so wrapped up in organising interviews and planning how the day would go that I didn’t think about this enough. And now, when I watch it back, I realise I look pretty rough in a few of the shots.

18. Look at the camera more. I found it very difficult to not look at the people I was interviewing but when you watch the video back it looks so much better when I’m looking into camera. I need to fight the urge to look at the other person and just look into the lens instead. It just feels wrong! 19. Have patience. I think the biggest piece of advice I should take away from this is to be patient with myself and take my time. I was always in such a rush to do everything, getting into a flap and stressing about interviewing enough people. I had a very relaxed brief, which was good, but made things difficult at the same time.

20. Accept help. Also, if you can, get someone to help you. Even if they just keep an eye on the camera screen to make sure it stays in shot it can save you a lot of hassle. They can also try and get people around you to be quiet while you’re trying to casually chat on camera.

21. Keep absolute focus. When you’re given a project as important as this you need to keep absolute focus and stay on track. There are a lot of distractions when friends and fun is about, but the number one piece of advice would be to stay focused.

I hope that’s given you something to think about in your filming endeavours. Here’s the big reveal, the video it was all leading up to…


Find out more about the digital nomad lifestyle here… The Reality of Travelling for Work

Wrestling With the Ethics of Photographing Children in Gambia

Travel Bloggers! What to Do When Clients Don’t Pay