I camped for 8 consecutive nights on my recent Trek America Mountie trip in Canada – it was a rollercoaster of emotions and warmth.

To summarise, definitely one of those things that’s better in hindsight. Not just better, awesome, but it didn’t quite feel like that at the time.

This was the longest I’ve camped, probably by only a day or two, but the longest.

That first night, when I wasn’t prepared, I was freezing. I think it was about 5C.

Facilities at the different campsites

We stayed at four different campsites on the Trek America trip, one in Banff, then Jasper, Well’s Gray and finally Whistler.

Jasper: Saw so many elk at this campsite, just chilling around the tents. It was amazing. There was a park, lots of space for the tents, and again, decent showers.

Well’s Gray: Our campsite in Wells Gray was definitely the most unique. It was styled like an old American cowboy ranch and had an (expensive) saloon bar to match. We had hot showers, but the toilets were kinda weird in that the doors weren’t high enough. You could see over as you stood up – didn’t like that.

Whistler: This was the swankiest of the campsites, we had hot showers, little fenced off areas to ourselves and there was a cafe serving huge breakfasts. It also had Wi-Fi. You did need tokens for showers here, which was really annoying. And led to the group showering a lot less than I think some of them should.

All of the bathroom conditions were better than I thought they were going to be. It was horrible, obviously, needing the toilet in the middle of the night and having to emerge from the relative warmth and comfort of my sleeping bag but by the fourth day I’d learned not to drink anything after 7pm, except for red wine to dehydrate myself.

Things I do hey?

DID YOU KNOW? Needing the toilet and not going in the middle of the night actually makes you colder – something to do with blood pressure.

Find out more by watching the vid on my YouTube

[half]Thanks to Trek America my self-inflating mattress and tent was bought and supplied and pre checked. All I had to do was put the tent up, blow the mattress up, sleep in / on it, take it down and put it away.

Everything else was up to us though.

So, back to that freezing night.[/half] 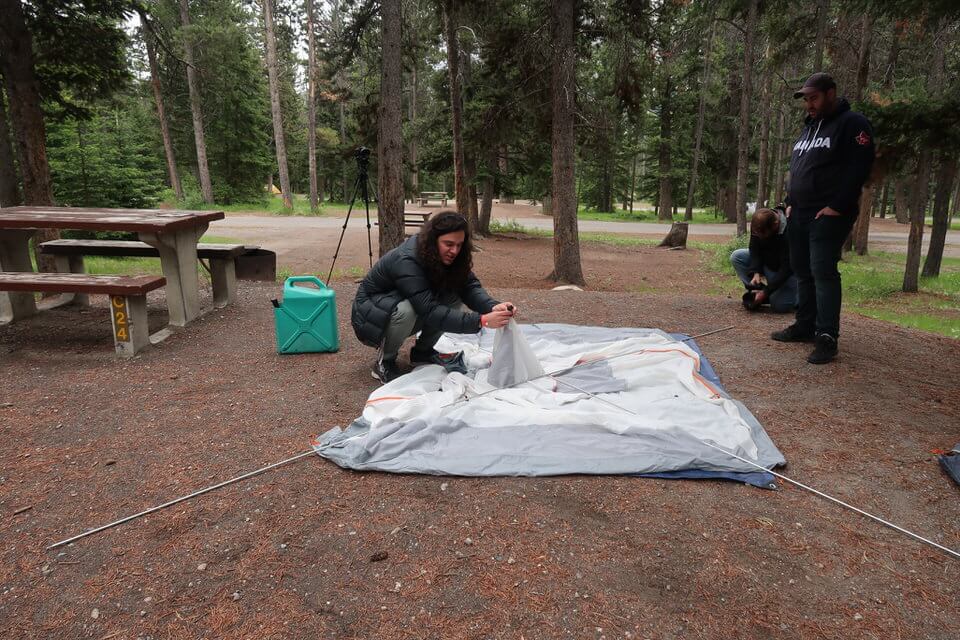 Bring either a super good sleeping bag, or some sort of fleecey blanket to go in your sleeping bag. I only had a cheapo Mountain Warehouse to start. We had been to Walmart when we left the airport – where I got a pillow – THANK GOD. But I thought I’d be ok with the cold. I wasn’t.

There was a Goodwill shop in Banff where I managed to pick up a fleecey blanket for $5, and a duvet, also $5. I put the duvet between us (me and Emily, you share tents) and the self-inflating mattresses, this helped so much, just to have another layer between us and the ground. Then I wrapped myself in the fleece, like a baby, and got in my sleeping bag.

You can leave all your stuff with your Trek America leader and they’ll do a Goodwill drop off so it doesn’t go to waste.

You need to camp with your suitcase in your tent, so bring a soft one to make it easier to fit. Emily and I lined them up, as if they were another person, next to me. Other people lined them like a barrier down the middle. We wanted each other’s warmth though.

That first warm sleep was definitely one of my top 10 highlights from the Trek America Mountie trip – click through to see the others.

So, day one and the most important lesson was building a home. Our awesome Trek leader Will showed us how to set up our tents, and we were ready to go. Emily and I got pretty good, by day six we didn’t even have to speak to each other and could get it up in minutes. As you can see in six seconds above.

Putting up your own tent, and taking it down, was definitely not anything to fear, and took minutes.

Is it weird that it was actually kinda fun?

Food on the Trek America Mountie

On the Trek America trip there’s a rota. In pairs or threes you’d have to take turns to wash up, clean the van and make dinner.

We had five meals at the campsite, with each team designing the menu for cooking outside. For an idea of what you could eat, here’s what everyone made…

Will and Heather: chicken, rice and peppers

Think the best meal was actually the burrito bowl though, and I’m kinda obsessed with them since I got home.

There are bears, and it’s pretty likely you’ll see one – we saw four during the nine day trip. Canada is quite rightly super protective of their bears and this means not putting them in danger. If you’re camping in Canada you need to be bear aware at all times.

This means not having any food or cosmetics, or anything fragranced in your tent at any time.

Every night you need to lock up your things either in the Trek America trailer, or in the bear boxes at some of the campsites. This is to prevent enticing the bears to come into the camp sites looking for snacks.

Some of the ladies on the trip had never even camped before, and they were fine. Camping in Canada is a brilliant way to embed yourself in the outdoors, and to really feel Canada’s nature all around me.

In this tech heavy modern world, it’s also an opportunity to get away from social media, and texting and emails, and all the bright lights of our screens. As a child all our holidays were camping, in Devon, and I have so many great memories.

I’ve been to Canada four times now and it was definitely this camping trip that’s made me fall in love with the country.

Would I camp in Canada again?

GIFTED: My place on the Trek America Mountie trip was in return for coverage on my blog and YouTube channel. The trip starts from £1020, plus flights, and is a great way to road trip across Canada without actually having to drive. Having the tour leaders and the group there totally made the experience, and I loved my first Trek. For more info on Canada, check out explore-canada.co.uk.

Trek America Review: All You Need to Know About the Mountie Canada Tour

[…] MORE: Check out Vicky’s post all about camping in Canada for info on the tents, campsites, and some tip […]