Finding WiFi in Hua Hin to work on is a little more difficult than in Chiang Mai, for example. The digital nomad culture here isn’t so strong, nor is the coffee culture and it’s more of a traditional holiday destination rather than any sort of digital nomad hotspot. However, with six days here and a good scout around picking up that WiFi scent I found six places with good WiFi in Hua Hin I’d recommend, and one that promised but didn’t deliver, just to cross off your list.

The Pony Cafe is just a few minutes walk from the train station – perfect if you’re getting the 2:10pm train to Bangkok and had to check out of your accommodation at noon, like I did. It’s near the main road and as the name suggests, is totally pony themed. There were easily over 100 in there from My Little Pony ponies to rocking horses to creepy stuffed creatures used as table centrepieces. The WiFi here was pretty nippy, and I got a lot of work done in my two hours. 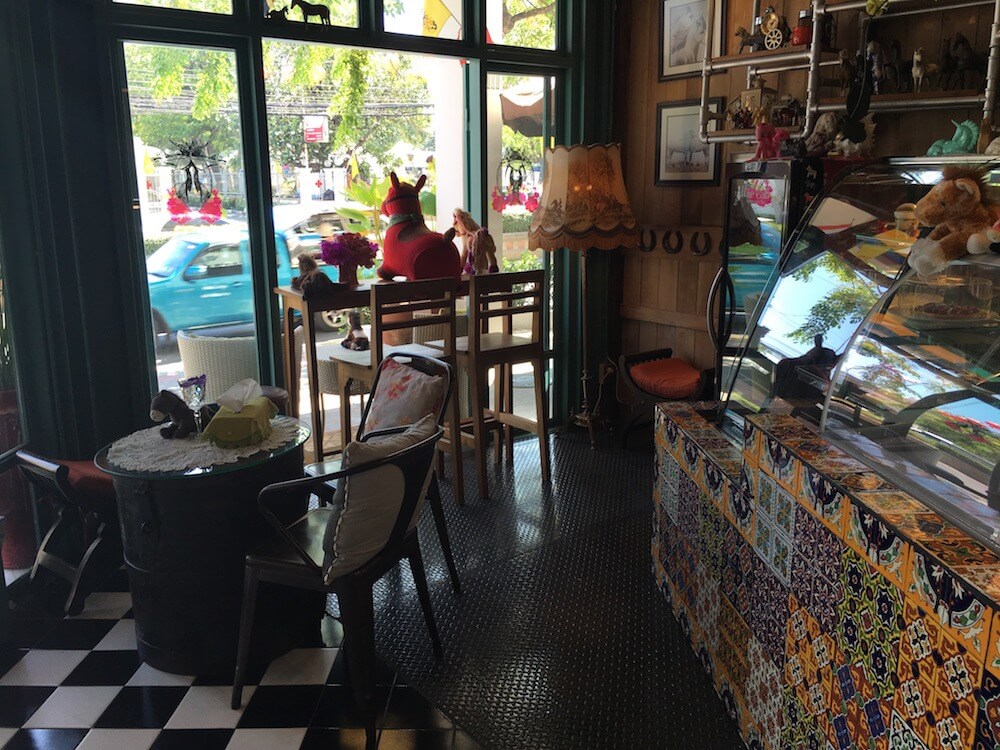 The two guys running it seemed really cool – I got a ‘big’ iced Americano for 65 bhat (p) and they kept bringing me over water, which I always appreciate. There were nice toilets out the back and I felt my stuff was safe to leave in the café with a nod to them to keep an eye on it when I went (was all that water they gave me). On that, if you need the toilet at the train station, I’d strongly recommend waiting to go here. They were Grim. This pretty little café / restaurant was my favourite place to work in Hua Hin. I was in the Bliss Cafe from 9am till 4pm eating breakfast and lunch the day I was there. I ordered a ham and cheese croissant, which came with a really tasty side salad which had loads of sun dried tomatoes. Jackpot! This was 80 bhat. I had an Americano with that for 60 bhat, and then for late lunch I had seabass on a noodle green curry. Was totally tantalising on the old taste buds. That was 150. The WiFi was quick, it was nice and airy in there and there was plenty of space. It’s a little away from the main part of town, but I liked that. There were good toilets and plenty of plug sockets in the conservatory bit where I was sat. Oh and the cakes looked amazing. My sustenance of choice here, over the five hours I was in MUMS, was a soda water and a yummy banana split. Both came to 165, 150 being the banana split which I felt was a little expensive, the same price as the sea bass in Bliss, but god it was good and just what I needed to keep me concentrated that day. I then proceeded to smash the soda water glass over the restaurant floor as I moved my laptop, which was embarrassing, but they were very nice about it.

This is a Scandinavian restaurant, and looked like a good place to come for breakfast although I didn’t get chance. It’s got some great chairs out front for people watching and they were ok about me plugging in and aiming the fans at my face to escape the 35C heat. This place is expensive. I had an iced Americano for 120 bhat. The air con is good though and I didn’t feel bad sitting there for so long seeing as they were ripping me off, so I went twice. Sometimes you have to sacrifice a few bhat for a good office.

Over my two visits to the Coffee Club I had a Singh beer at 90 bhat (much better than Chang, more taste), the aforementioned coffee, and a delicious Reuben’s sandwich with fries. Honestly, so good. 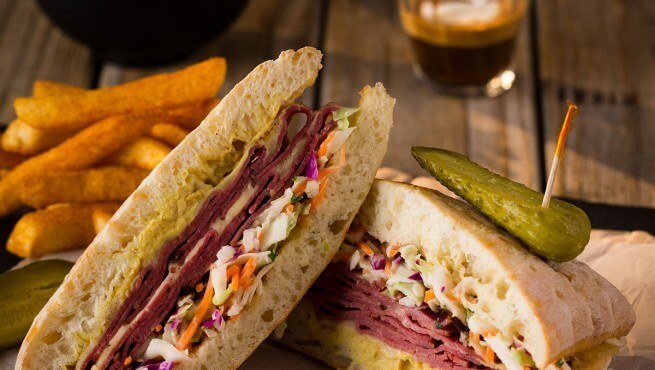 The toilet is out the back and round the corner here so I didn’t feel comfortable leaving my stuff and just had to leave when the time came. Plugs, yep. One time I was in here I’d unknowingly sat on a four-person table, I’d just chose it for the plug, and this woman came in all a huffin and a puffin making a big drama about moving the chairs for her three friends round the two-person table. I was just about to offer to move and she looked at me with the biggest scowl on her face, so I just extended my legs out in the space she’d created for me and gave her a little smile instead. An ice cream parlour with excellent WiFi on the terrace? Went twice. Only had ice cream once though (110 bhat) – regrets. I had a coffee (60) and a beer (90) during the other visits. The lady was very helpful in finding me a seat with a plug and made sure the fan was on me too, bless her. This was a great spot for people watching in between working as it was just near the start of the nightly market and right in the thick of the main part of Hua Hin Centre.

I didn’t like it here and the WiFi was rubbish. Had a poor excuse for a Pad Thai (100) and left. I was in Hua Hin for 5 nights and stayed at Hipstel Hotel & Bistro for three miserable nights of no sleep before moving. In short, there were mozzies in the room, it looked nothing like the photos online, the walls were so thin it was as if the man snoring in the room was in my bed (got so frustrated I got the owner to go and smother him with his pillow / tell him to shurrup, either way it worked), the shower made me not want to and the owner would stay up till 3am chatting to his friends just outside my window. Also, there was nowhere to sit and do my work. It was 450 bhat a night. I’d already paid the three nights and the second two there was no one else in my 4 person room so I stayed in hope of sleep, but still never came. Fourth day and I moved to Jenny’s House, really liked it here. Jenny was lovely and it was so good to have an actual sprung mattress, the first since getting to Thailand. The walls were still thin but people were respectful and there were signs up telling people to shut up after 10pm. There was a good work space here and she had two WiFis. My room had a desk and I got lots done.

Jenny’s House is right in the heart of Hua Hin and was 700 bhat a night. I ate breakfast here both days, first trying the Asian option and then the American. Both came with a big plate of fruit, hot drink, fresh orange juice for 120 Bhat. I’d recommend the Asian option, with tea. If you’re a WiFi Wanderer, like me, there are some great places to find WiFi in Hua Hin, you’ve just got to look beyond those tourist restaurants and follow my advice to scout out the best places to get connected.