I think that’s what I was meant to say anyway. Those were the sounds I made as I curled my hands into heart shapes and waved them about in front of me over my drink. Yesterday I went to the @home Maid Cafe in the huge AKB48 store in Akiharaba and I still feel a bit weird about the whole experience.

I was in the store, saw a queue, joined it and ended up in a parallel universe where the waitresses wore maid outfits, you had to bless your drink with the greeting above and your coffee had some sort of anime creature squeezed onto it by the maid in front of you.

Maid Cafes are a big thing in Japan, and I’d just stumbled on one of the most popular ones in Tokyo. 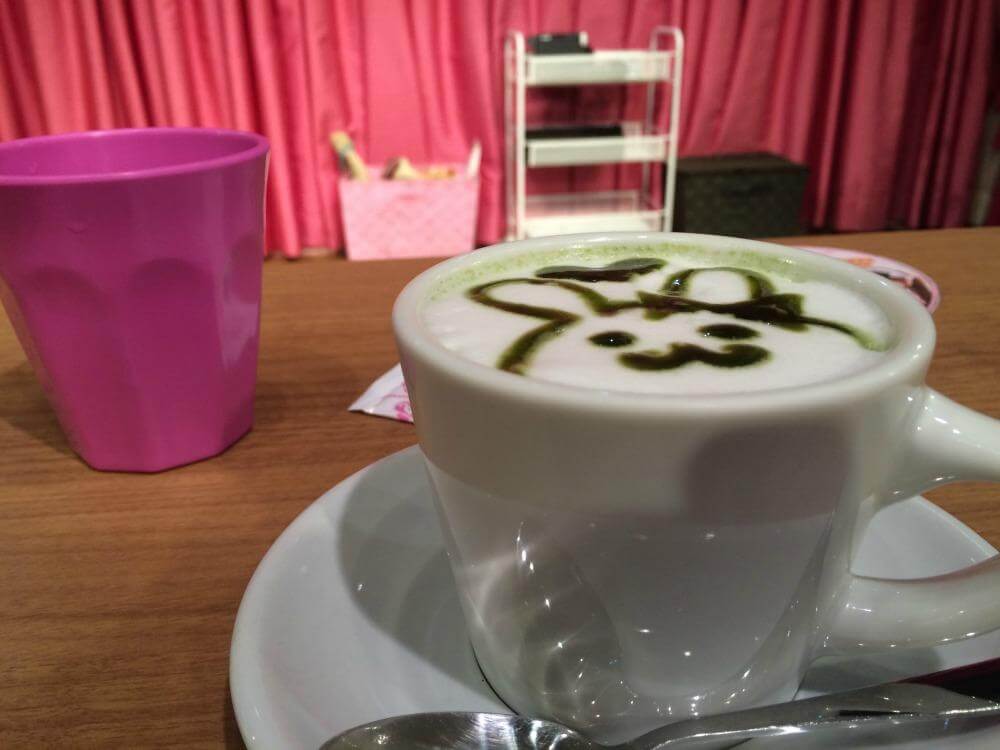 Sadly I wasn’t allowed to take photos in there – only of the food and drink – so I’ll have to describe the novelty. The walls were striped candy pink and brown and adorned with photos of the maids in cutesy positions on carousels, chandeliers and disco balls hung from the ceiling and right in front of me was a stage, complete with delightful pink curtains. I was shown to a stool at a bench curving round the performance space, along with 5 other customers, all male. The rest of the café was made up of tables, featuring about 20 Japanese men, a western couple and a Japanese mum and teenage son.

If only I knew Japanese…

‘My’ maid, Melu, bought over a board with photos of six girls pinned on. Not quite sure what I was meant to do I just pointed at one and nodded and smiled. She did the same and kept looking at me. So I did it again. After an uncomfortable minute where she stood smiling sweetly at me and stroking her hair, off she scurried.

Unfortunately my interaction with the maids was limited seeing as I don’t speak a word of Japanese, and my maid didn’t speak English. They were definitely entertaining the men surrounding me though, laughter all round.

If only I had the cash to splash I would’ve spent 700¥ on the chance to play Connect 4 with one of the maids, another option on the menu.

At first I thought the suspicious looking box on the stage with anime style headbands in was for them to do some sort of performance, and was looking forward to it. But as ‘Bicky’ was called out on the microphone I realised it was for me to go up, choose something ridiculous to put on my head, and have my photo taken. At least I got to do the heart thing again, this time in front of the whole café.

Then, just when I thought the whole thing couldn’t get any weirder, as I was about to leave my maid thanked me for being a good master and gave me this ‘Master’s Certificate Card’ with ‘Princess Vicky’ written in Japanese on the back.

I shall treasure it forever.

How to Be a Successful Travel Blogger
← Previous
How to Choose a Travel Blog Domain Name
Next →
Click here to cancel reply.

Thanks for a marvelous posting! I definitely enjoyed reading it, you can be a great author. I will remember to bookmark your blog and definitely will come back very soon. I want to encourage yourself to continue your great posts, have a nice evening!

seems very interesting and worth a visit :)

Yeah it was cool. Definitely very strange, but cool!

I admire your bravery for wandering into these strange situations. What an amazingly odd place Japan is!

Ha, thanks! Some of the people I spoke to in one of my hostels said they didn't dare to. I think when you don't really know what your doing, and you don't think about it too much, that's how you get the best experiences!

VickyFlipFlopTravels » Cool Festivals and Epic Holidays |51 Coolest Things to Do in Tokyo: No Messing About

Haaaa! I went to a maid café in Tokyo this summer and I still haven't recovered!

Tempted to go to another one, just to check it really happened!