The Brutal and Tumultuous Story of the Taj Mahal, in 3 Minutes

Often cited as the epitome of a love story I’ve found that the tale of the Taj Mahal isn’t quite the pure symbol of love people like to make it out to be.

I knew it was commissioned by the Mughal emperor Shah Jahan as a dedication to his late wife, but that was about it. After visiting this week on my three weeks in India I’ve got a whole new perspective on just how romantic this Shah Jahan really was.

Was the Taj Mahal built by slaves?

I know a lot of people are reading this post to find out if the Taj Mahal was built by slaves. Well, I answer that question below using the information that was given to me on my tour of the Taj Mahal. I was on a tour that was actually meant for Indians, but I’d somehow independently booked it while I was travelling India. If you want to know more about the slaves and the Taj Mahal, read on.

The Story of the Taj Mahal

Shah Jahan and Mumtaz Mahal met when he was 20 and already had two wives he’d married at 16 and 18. He was muslim so of course this was nothing out of the ordinary. They married and the four of them lived together in the huge Agra Fort, and Mumtaz soon became his favourite.

She ended up bearing him 14 children in 10 years, and sadly died during the birth of the final one. She knew there was a problem and with minutes to live made him promise three things.

1. To never marry again
2. To look after the remaining children (8 of them had already popped it)
3. To build a memorable final resting place for her

He vowed that he would do exactly as she wished. Let’s take a look at how he got on.

He stood by this and the good egg never did marry again, just keeping the two wives that were left. Instead he kept 50 concubines in his famous Agra Fort. They were kept in the 50 rooms behind the doors in the photo below for his entertainment whenever he pleased. I presume he would look out on this view and decide which girl he would like that night / morning / day, eeni meeni miini moh...

All 50 were aged between 12 and 18; once they reached their past it date he released them. And if for any reason they didn’t want to have sex with what would today be classed as a revolting pedophile, he had a punishment room in the grounds to teach them a lesson. Apparently the walls of one area of the Agra Fort used to be covered in images from the kama sutra, but they got rid of them for the tourists.

So yes, he kept his promise and never married again. What a guy.

2. To look after the remaining children 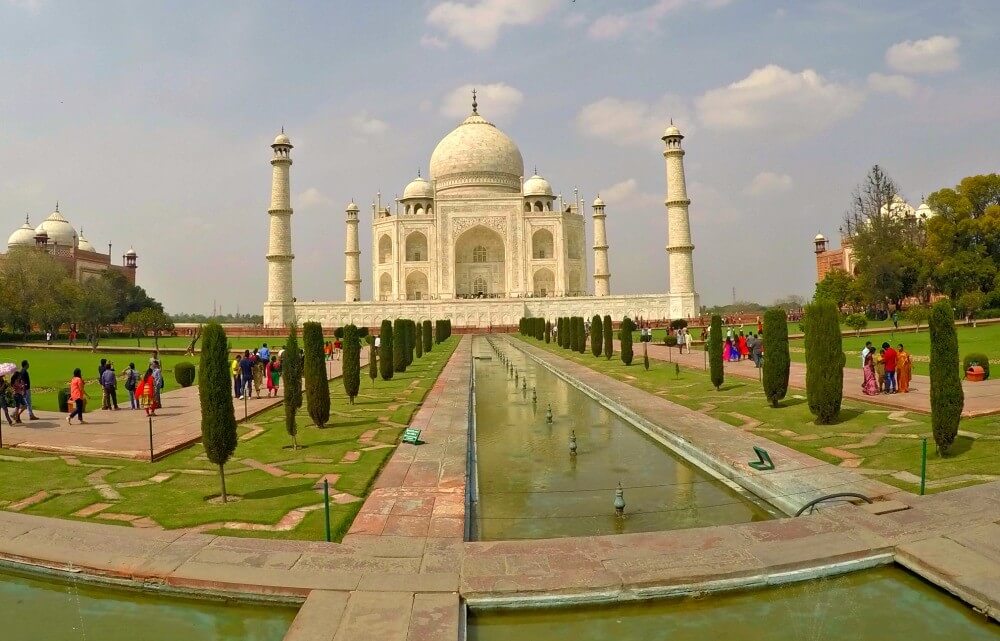 As the remaining children grew up they warred. Everyone wanted to be king, and there was only one spot. The youngest boy, delightful child that he was, killed his elder brothers to get to the throne. He also imprisoned his father in the Agra Fort when he fell ill, and never let him out again for fear of being overturned. He then decided to imprison the creator of the Taj in the Agra Fort too so he’d be forced to spend his last years looking at the beauty he’d created over the river but could never actually touch it. There are also rumours that he had the architect’s hands cut off so he could never design anything else so beautiful, and he gauged out the eyes of the workers out too, so the story goes.

Another rumour flying around is that while imprisoned the architect taught the boys that served him all he knew about architecture and they went on to great things, much to the annoyance of the now king.

When Shah Jahan finally died his daughter wanted to bury his body in the Taj Mahal, next to her dead mother, and orchestrated the whole thing against her brother’s wishes. This also meant she ruined the perfect symmetry of the building in allowing them to be reunited.

It seemed that they’d created a monster with their last son and Shah didn’t stand a chance.

More on travel in India

What to Do With a Week in Kerala

Coolest Things to Do in Kerala

3. To build a final resting place for her

Mumtaz died in 1622 so Shah Jahan wanted to create a building with ‘22’ at its core. He decided it would take 22 years to create and commemorated the fact by placing 22 crowns on the main entrance gate. He drafted in a young architect who had a vision and carried it out to perfection, with the help of over 20,000 slaves working every day.

The Taj Mahal was built by slaves. Thousands of them.

Get close to the Taj and you’ll see that it’s not just painted but every decoration is engraved into the marble using vegetable colours and precious stones – a task that could take months per stone.

Materials were donated by various emperors and kings and carried to the site by elephant. The precious stones were drafted in from around the world and at one time the tomb was filled with gold and jewels, though now anything that could be stripped has been. By my tour leaders account it was the Brits that took it all.

One of the many things that amaze people today about the design of the Taj is the thought given to the construction – it’s lasted almost 400 years. The pillars are wonky to withstand natural disasters, the foundations are much deeper than other buildings designed around that time and the building was designed so the interior reverberation time is exactly 28 seconds, creating just the ambiance Shah Jahan wanted when prayers were offered to Mumtaz Mahal.

The story goes that he wanted to build a white temple for her with a bridge going over the river to a black one for him. As soon as he fell ill and his family were at war with each other work stopped on the black one never to be resumed.

No artists, creators or designers are named as the building was meant only as a dedication to Mumtaz.

The King did good with the Taj Mahal, although he used slave labour to do it all, so I don’t feel I can give him the point for this one.

The future of the Taj Mahal

Apparently the Taj Mahal is turning yellow thanks to all the pollution so there’s now a 10,400-square-kilometre (4,000 sq mi) Taj Trapezium Zone around meaning strict rules are in place.

More worryingly some reports say that they reckon the tombs are going to turn in on themselves within the next few years because of the lack of water in the river behind. You’d best get there, quick!

Seeing the Taj Mahal in all its glory in Agra was awesome. The building is actually even more impressive than I thought it would be and if you go, make sure to fit in the time to enjoy it from all angles.

If you’re a white Westerner you’ll also need to factor in some time for the inevitable photos you’ll be asked to stand in. There are now at least 50 camera phones in India with my cheery face on and some sort of Taj Mahal view in the background.

But that’s India – a true, incredible, cultural experience I’d love for us all to have at least once!

I hope this has answered any questions you might have about the history of the Taj Mahal, slaves’ involvement and whether it really is the temple of love it’s touted to be. What do you think?

32 Professional Travel Blogger Secrets You Need to Know
← Previous
How to Overcome the Self Doubt That Will Ruin Your Travel Blogging
Next →
Click here to cancel reply.

Fake information about a great monument that has been aptly described as "a teardrop of love on the canvas of time". The architect was one of the masters of the age. Every worker was paid in gold and silver. After all, Moghul India was the richest in the world, richer than all of Europe put together. Sad they are ruining it physically with pollution and spiritually with fake stories. Dr. Ahmed

I'm sure there are lots of opinions about the true story of the Taj Mahal, but this is what my tour leader told me so this is what I choose to listen to. Thank you for taking the time to describe a different side to the Taj Mahal though!

We just visited the Taj Mahal last month! It did not disappoint at all

Incredible isn't it? I loved it :)

Really enjoyed the post. Thanks for digging a little deeper into the back story of the Taj. I was just there in Agra about 2 weeks ago. In person, the Taj truly is breath taking. It's hard for any camera to capture what the eye actually sees and what you feel, but your photos did a pretty good job!

Ar thanks Wayne, I loved it there. The Taj was definitely more impressive than I imagined, well worth a trip and I'd happily go again.

Haha, congratulations (I think) on becoming the new white western face of India! Seriously, this is a killer history lesson - why is it that we generally only get to hear the good bits?!?!?!

I know, all this was so much more interesting to find out than the story they want you to know!

Sounds scandalous! I can't wait to visit this on my way up north. Did you stay in Agra or just do it in a day? I've heard a few bad things about Agra?

I did a 3 day Golden Triangle tour with Delhi Tourism. It was so good and a lot cheaper than other tour companies. If you have the time though it would be cool to do it by yourself so you could have longer in each place. Yep, I went to Agra but I was in a group so I didn't really notice if it was sketchy or not – seemed ok to me!