Camping in the Serengeti: the Real Story

“If you need the toilet in the night, look out of your tent and check for eyes first. If the coast is clear take your torch and do it as close to the tents as possible. Do not walk up to the toilets.”

I put my bottle of water down, stared at the tour leader to see if she was joking and vowed not to drink another drop until daylight.

Apparently G Adventures were serious when they said we’d be camping in the Serengeti, but I thought we’d at least have some sort of electric fence, barrier, wires, brick walls; anything, to separate woman from beast. But no, apart from the material of my sleeping bag and the canvas on the tent to protect me I was fair game for any of the thousands of animal species that call the Serengeti home. 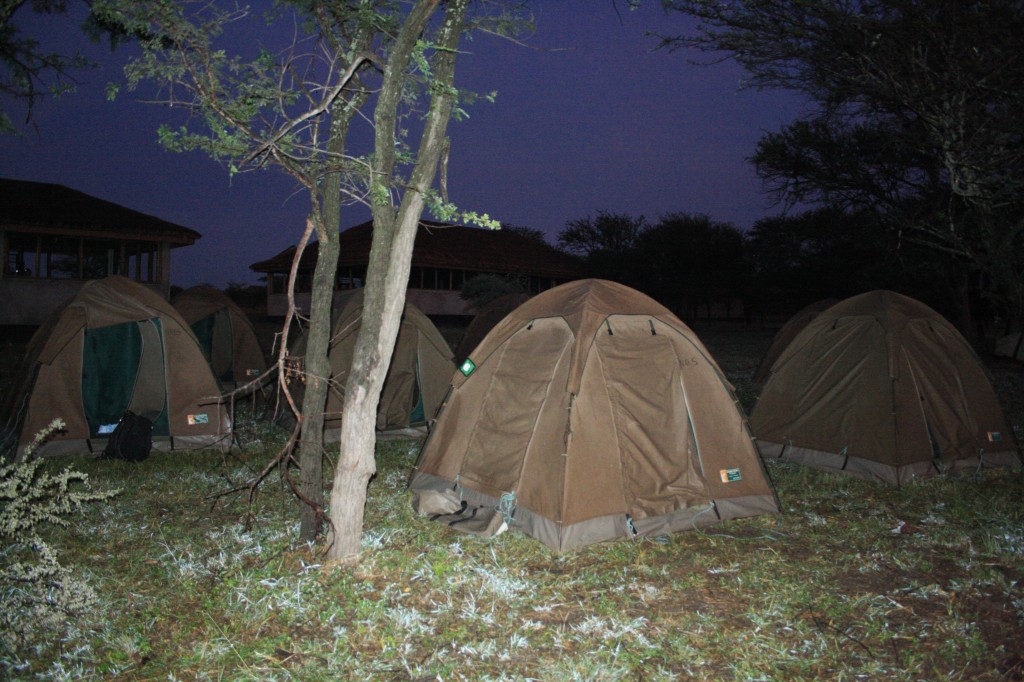 My fellow tour friends decided that seeing as I won the trip from Zanzibar to Nairobi and they’d all paid for it, they’d throw me to the lions if they came a knockin’. I said a little prayer to anyone who was listening that the 2,500 lions in the Serengeti would stay away, just for tonight.

Around 40 of us were camped at the site. It was chucking it down with rain English-summer-style so we were all in bed for around 9pm. I lay there flinching at every sound and just waiting for the inevitable stampede. My doxycycline-infused brain was visualising myself as Simba in the gorge – the wildebeest were on the move and the hyenas were chasing them towards my tent.

Ten minutes went by and I was still wide awake and on high alert. I could hear the girls in the other tents nervously chatting and giggling and tried to allow it to sooth me to sleep, but as soon as I heard a non-human sound my body tensed up.

“Something just brushed past our tent,” my roomie whispered.

Not sure if you’ve ever tried to sleep with a possible lion hearing outside your tent, but it does make nodding off a little more exciting/impossible.

“Did you hear that?” I sat bolt upright.

When I closed my eyes, this what I saw, but I'm the wildebeest...

The lions were definitely outside. I could hear them grizzling – like when a baby makes satisfied noises, or a cat purrs for attention. I lay back down and must’ve lost myself in the sounds, the next thing I knew I was being roused for our early morning game drive.

Excited morning chats with my tour leader and group revealed that hyenas had been sniffing around all night and I hadn’t been imaging the lions. One of my fellow campers said she’d stuck her head out the tent at around 2am and seen loads of eyes staring back at her. She recoiled and spent the next two hours about to wet herself until she gave in and tried again. Lucky for her they’d moved on.

To celebrate our Serengeti survival we were rewarded with a dazzle (the lingo for a group) of zebras chilling out under the rising Africa sun less than 50m away. 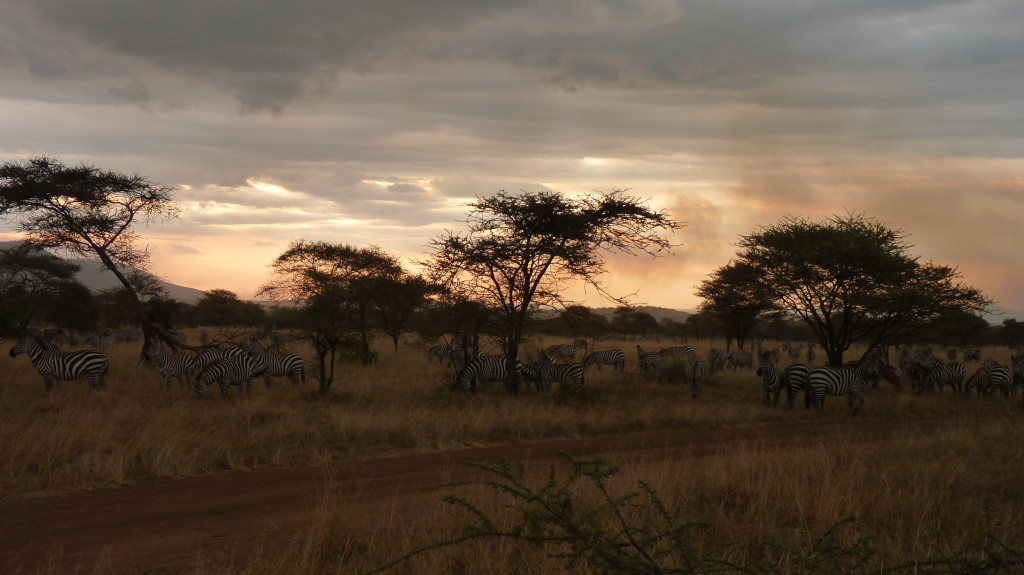 Celeb Spot: the Lion King Cast in the Serengeti
← Previous
Should Girls With Cellulite Wear Shorts?
Next →
Click here to cancel reply.

Reminds me very much of an experience back in the early 1970s when I was camping out in the bush near Arnhem Land in the Northern Territory of outback Australia. I woke up in the morning and poked my head out of the tent flap and looked straight into the eyes of a full adult buffalo that was sniffing around the tent. Eye to eye distance would have been no more than one metre. Fortunately humans are not on their breakfast menu, but the encounter was definitely up front and personal. It was more surprising than scary, so I slept in a bit longer and buffalo wandered off. Whilst on tent and animal stories, I was camped on Rottnest Island, just off the coast from Perth, the capital of Western Australia. The island has a very large population of Quokkas, a nocturnal marsupial that resembles a small wallaby (smaller relative of the kangaroo). http://www.rottnestisland.com/about/flora-fauna/quokkas . They are inquisitive food scavengers, and during the night one had found its way into my little tent and I woke up with this heavy weight on my chest. It took me a few seconds to become aware that it was my uninvited guest sitting on me. What to do? They have quite efficient claws so I figured if it was startled and panicked it would most probably destroy my tent in its efforts to escape. Not a good idea. Solution once again quite simple. Ignore it and go back to sleep. It found its way out before morning and fortunately, I had been warned, and had my food supplies in a Quokka proof container. Moral of the stories.- Don't panic, just go back to sleep. Not sure about big cats though!!!!!!!!

This brings back memories! I was also a bit taken aback when I realised we were camping among the lions! There wasn't a chance in hell I was leaving that tent after dark!

Same, probably would've wet myself instead...

This sounds amazing. Amazing in that camping in the serengeti is such an incredible experience, and amazing in how terrifying (at the time) it must have been for you. Very cool!

Thanks John! It was pretty cool. Wish I was there now!

I can't believe you slept out there, that's so cool! Speaking as someone who - OK this is a bit embarrassing - has never been camping even in the safe and familiar environment of the UK, I just don't think I would have been able to go through with it.

I saw 'the eyes in the night' from the safety of my car when we drove into a game park in South Africa and that was scary enough! It was late on New Years' Eve and it was after dark because we'd been having such a great time in Soweto we hadn't wanted to leave, so by the time we finished our marathon drive and got to the game park the big Jurassic Park style gate to the road towards our hotel was shut up for the night and a storm was brewing. We waited for what felt like hours for someone to come and unlock the gate, but I wouldn't have camped there if you'd paid me, so hats off to you for being so brave! :-)

You've never been camping!? Oh my days Jai, you need to go! Maybe not in lion infested fields, but definitely somewhere. I'm gutted I missed out on 'the eyes'. I need to go again just so I can keep watch. I'm glad someone came out and got you and Jurassic Park is such a good way to describe it :).

I did a Serengeti camping safari but don't remember being that afraid. I don't know why! We received the same instructions, about looking out the tent first for eyes glowing in the dark. That is a little scary, I guess.

I think it was the effect of the rest of the group that had got to me. Some of them would scream when a bug landed on them so they were terrified of the lions getting us. Also got a few scare stories from our tour leader that didn't do me much good :).