Why You Should Go on the Dharavi Slum Tour in Mumbai

While in Mumbai we decided to do a slum tour. It wasn’t a pre-planned thing, we’d been looking at street food tour possibilities and saw there was an option to do a tour round the Dharavi Slum too. Apparently famous it was a ‘top thing to do in Mumbai’ and we decided to go for it.

We went with Be the Local Tours based on two facts:

1. They didn’t allow photography (all photos from Be the Local Tours)
2. They clearly state it wasn’t going to be some sort of voyeuristic tour where you pity the poor people for two hours.

According to their description on the website it seemed like a chance to see life in the slums of Mumbai, in an authentic yet positive way.

We met Ovas at the Mahim Station and made our way to the entrance of the slum. He set a few ground rules before we went in;

Already in that first minute it wasn’t what I expected. Our route wasn’t full of the corrugated iron makeshift houses I’d seen on the roundabouts of Delhi. The houses of the Dharavi Slum were made from cement, yet still small and bare inside and out.

“More than 1 million but less than 2 million”

– current estimate of people living in the slum today Most of our time was spent in the industry part of the slum watching the various initiatives developing under the guidance of the SPARC NGO. We were taken straight to the ‘Industries’ section to see how they use the modern concept of recycling to their advantage.

In the next room we saw how they strip down old paint cans, hammer out the dents and then sell them back to the companies as new. In another they were melting down any aluminium they could get their hands on to create big blocks to be resold. The guy mixing the furnace with just a big stick works for 10 hours a day to melt it down.

We also saw the guys working on sewing machines to create dresses to be sold around the world. In another room they were dying the material, working hard to get the dye colour to match the swatch they had. We saw others making soap and chopping it up to be resold. In another they were making puff pastry – some packaged in big bags to be sold to the budget buyers, others intended to be bundled individually to be sold off at a higher price.

Our final stop in the industries was the leather shop where the owner was sat in his air-conditioned office, right in the heart of the slum, surrounded by his products. Apparently he supplies his bags to much of Mumbai and beyond. The recent law from the Governor of Mumbai has demanded no more cows be killed for leather, so his prices are on the up. As I tipped my head back to drink from the bottle of purified water he’d doled out I could see the slum kids happily using the rubbish dump outside for a cricket ground.

Working in the Dhavari Slum Most of the men who work in the Dharvani Slum were immigrants earning 250-500 (£2.50-£5) rupees for 8-10 hours work to send home. ‘Home’ would be visited 2-3 times a year. The jobs come with free accommodation above the shop they work in. Our guide spun all this in a positive light but once we dug a little deeper I wasn’t so sure.

Right by the slum is an apartment block. Ovas asked us to guess how much a two-bedroom apartment would be there, but I didn’t even know where to start.

That is a lot of money in Mumbai where a tube journey is 20p, a plate of street food is 10p and 30 minutes in a tuk tuk £2. The apartment block – complete with a private nursery and hospital downstairs – was for the Dharvani Slum business owners.

The slum is right in the centre of Mumbai – a highly desirable location less than an hour from anywhere in the city. The government is trying to demolish the slums to make way for high rises, but the only way they can do that is to come to an agreement with the near 2 million residents. The current bill states that they’ll house people in the high rises, but only those who bought their house before the year 2000, and only those with bigger houses. Apparently a lot of people with two storey slums rent out the top and live in the bottom – and they wouldn’t be able to do that in an apartment. For many reasons the Dharvani community has rejected the bill, and it’s back to the drawing board for the Mumbai government.

Could you ever come to a mutually beneficial agreement between 2 million people and a government? I’ll watch that one develop with interest.

Education in the Dharavi Slum

There are 60 schools in the slum: 12 private and the rest government owned.

All the kids receive a school uniform and their books and pens for school from the government, and their parents receive 5kg of rice if they ensure their child attends. This has led to a new 90% literacy rate for today’s generation – an impressive feat. At school they’re taught Hindi, English and Marathi as a requirement, and other languages on top.

READ MORE: Top Things to Do in Mumbai (from gobeyondbounds.com)

Residents of the Dharavi Slum 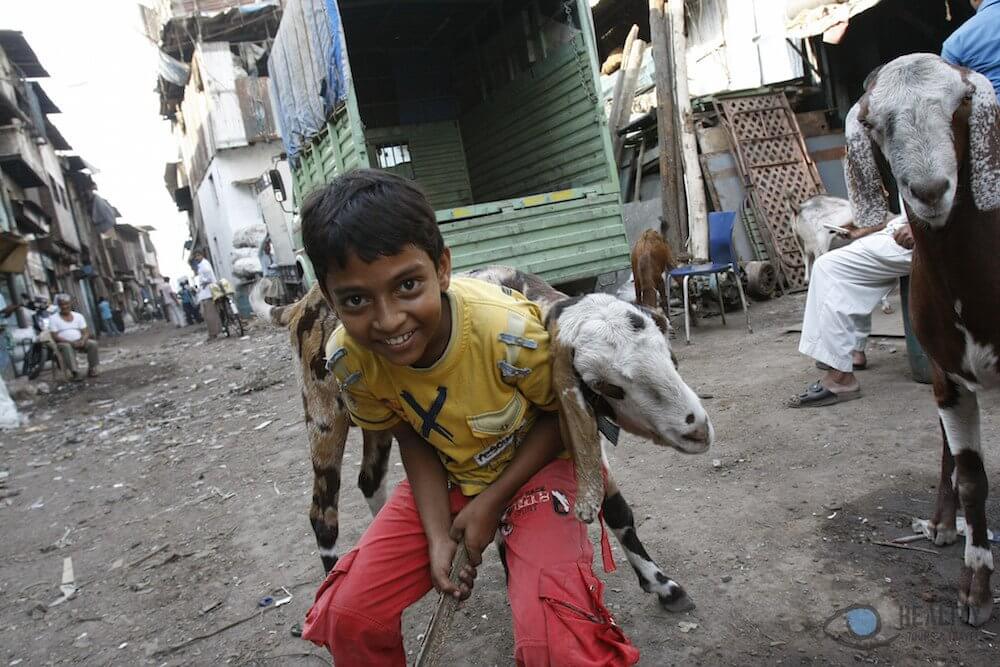 We visited a small part of the residential area, ducking and diving between the low hanging wires and roofs and trying not to trip on the uneven floor. The slums were like a maze, a labyrinth of giddy children, men on a mission and doddering oldies. We came out from the dark of the tiny alleys to a big rubbish dump area, where the kids were running around and playing on top of the festering landfill. The area gets cleared 2-3 times a month and is used by all the residents of the slum. This was where we had to practice our first rule of the slum: don’t grimace at the stench.

We were told we could look in the slum houses casually as we went past but just don’t stare, as you would anywhere. From the few houses I saw inside there were bare concrete walls with a few religious artefacts, basic kitchens and just cloths across the door for privacy.

I couldn’t help but notice the phone signal in the slum. Residents were chatting away on the phone everywhere, with no problem. We asked Ozas about it and he told us about Anil Ambali who owns the main network Reliance, and how he lived in a billion rupee house with four others in the same floor space as one of the slum high rises with 70 families in. It’s obviously in his interest to make sure the phones work in the slums – I can’t even get reception in my hometown! Ozas told us how some tourists just want to go on the tour for a ‘Slumdog Millionaire experience’. There was a Japanese couple who just wanted to see the long drop outside toilets used in the films – they were sorely disappointed when they saw the concrete building where the residents actually go.

The residents weren’t happy about the film thanks to the worldwide negative reputation it’s given to Dharvani. The name ‘Slumdog’ didn’t go down too well for starters, and the depictions of the slum from then on in were inaccurate too. In the whole film there were only two bits that were actually filmed anywhere near Dharvani. According to Ozas it was all done in a studio.

The 8th and 9th Wonders of the World

A little known fact is that the Dharavni Slum is home to the 8th and 9th Wonder of the World, so Ozas told us. Number 8 is the multi faith temple, which features some sort of nod to every one of the many, many religions present in the slum. It was a colourful room which had been recently decorated for some festival. Ozas was proud of the fact so many religions live side by side in harmony. The slum could be used as some sort of positive microcosm as an example to the rest of us.

The 9th Wonder of the World was the Dharvani Slum White House. A treehouse for pigeons, complete with a brown pigeon they bought in to celebrate Obama when he came into office. Of course it made us ethnically hypersensitive Brits nervous, but the slum people around us found it hilarious.

Thoughts on the Dharavi Slum I’m still not sure about my thoughts on the slum, it was interesting to see all the industry and jobs going on in there, but I couldn’t help thinking the wrong people were benefitting and it still seemed exploitative somehow. But then isn’t all work? There’s always some fat cat sat at the top counting his rupees / dollars / pounds while those at the bottom work away.

With almost 2 million people we could be told any story in two hours. For most of the tour if I’d just happened on the area I wouldn’t actually have even known it was a slum. The few minutes we spent in the residential area were more what I imagined, as was the tuk tuk ride out of there where we went along the river and saw the expected corrugated iron shacks.

It’s too hard to make any informed sort of opinion on such a complicated subject in just two hours but I’m definitely glad I went on the tour and it’s always interesting to see how other people live.

Be the Local Tours gives 80% of the profits back to the projects it supports. I paid 500 rupees for the two-hour tour and would recommend the experience to anyone.

Would you go on a slum tour?

30 Things NOT to Do in India
Yab Yum Huts in Goa: The Review

A Relaxing Night on an Alleppey Houseboat, Kerala

What to Pack for Papua New Guinea

12 Best Food Experiences Around the World

An Awesome Kobe Day Trip Itinerary For You