We had just three days to explore and find the best things to do in Skopelos, so we hired a jeep, took as good a look around as possible, joined the Mamma Mia tour, beached it up and enjoyed the best meal I had in the entire week in Greece. Skopelos was the third and final island on our Olympic Holidays Greek island hopping adventure.

Here are my favourite things to do in Skopelos, so you don’t have to waste any time fannying about wondering what to do.

Super Quick Guide to Things to Do in Skopelos 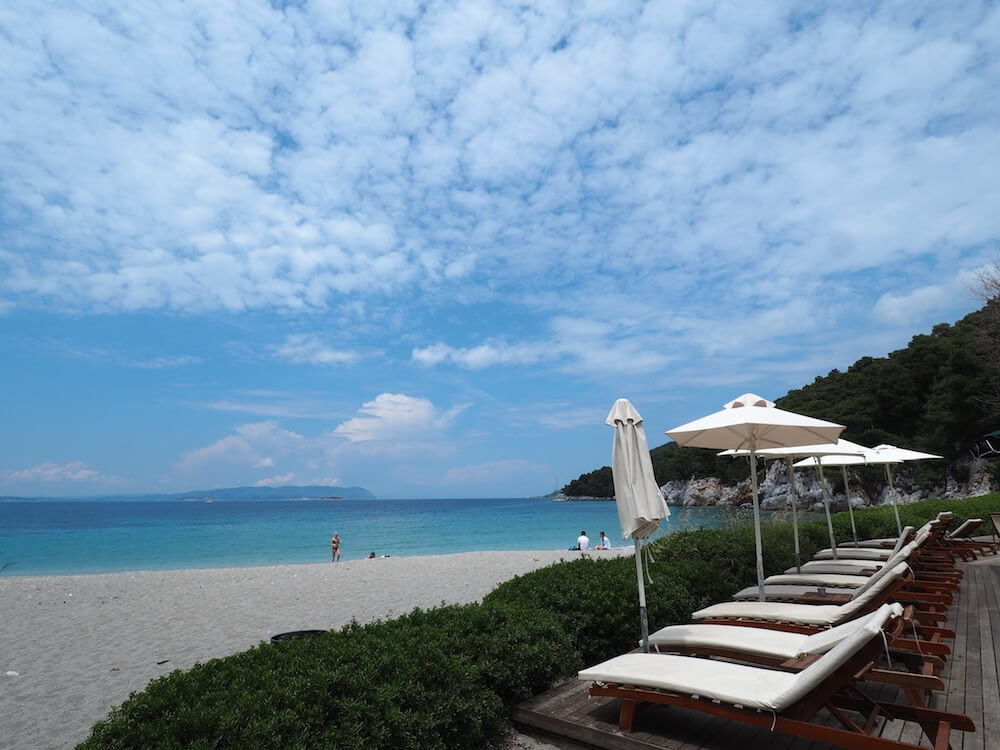 So much fun. They play the highlights from the film on the TV on the bus to jog your memory. First stop if the island church where the wedding is. Weather was a bit grim when we went, but it’s perched on that rock up there. Climb the (treacherous) steps to the top. This is a great way to see the church without having to drive there yourself – see the driving section below. 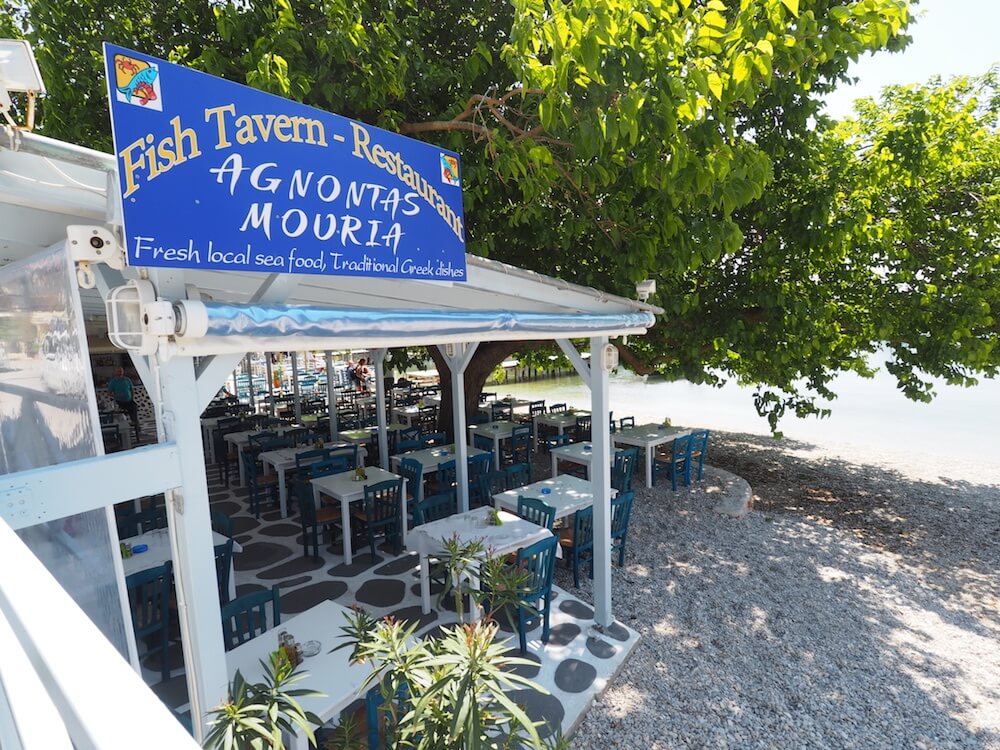 Within the tour they take you to the beautiful beach at Agnosta for lunch (meal not included) and to the famous Kastani Beach too, where Amanda Seigfried sings Lay All Your Love on Me to Dominic Cooper. It’s now the most popular beach on the island with a coffee shop, loungers and the odd boat full of tourists too.

A surprise trip to an olive farm was thrown in there too – well, when in Greece…

And, if you’re up for it, you can have a little sing song on the mic on the bus too. You can book the tour easily through your Olympic Holidays rep. 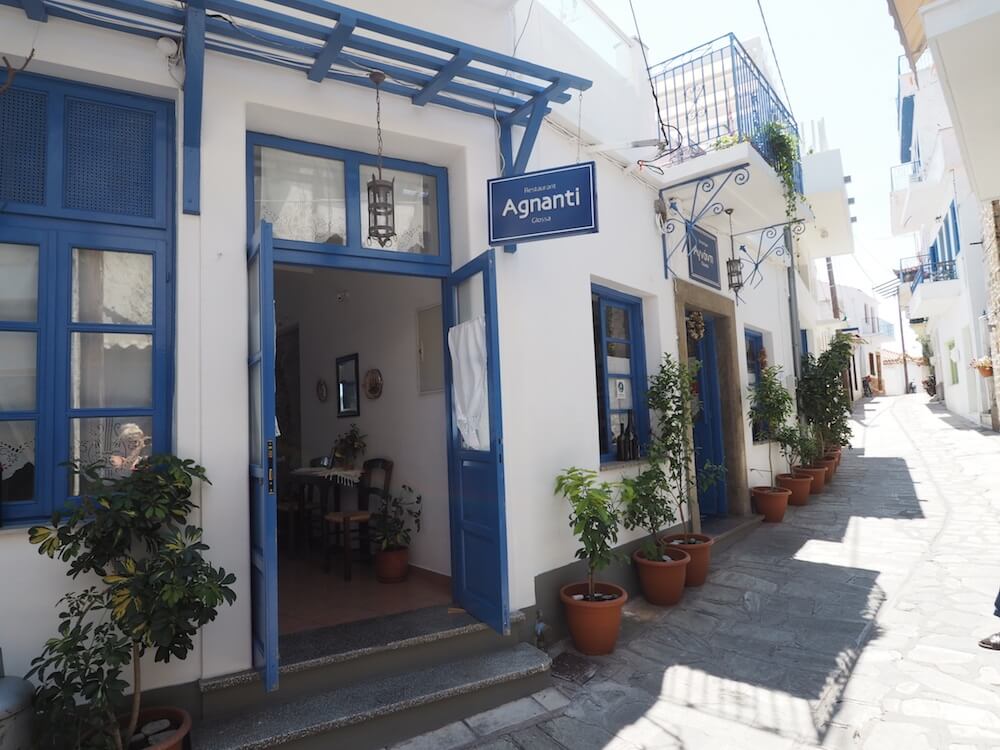 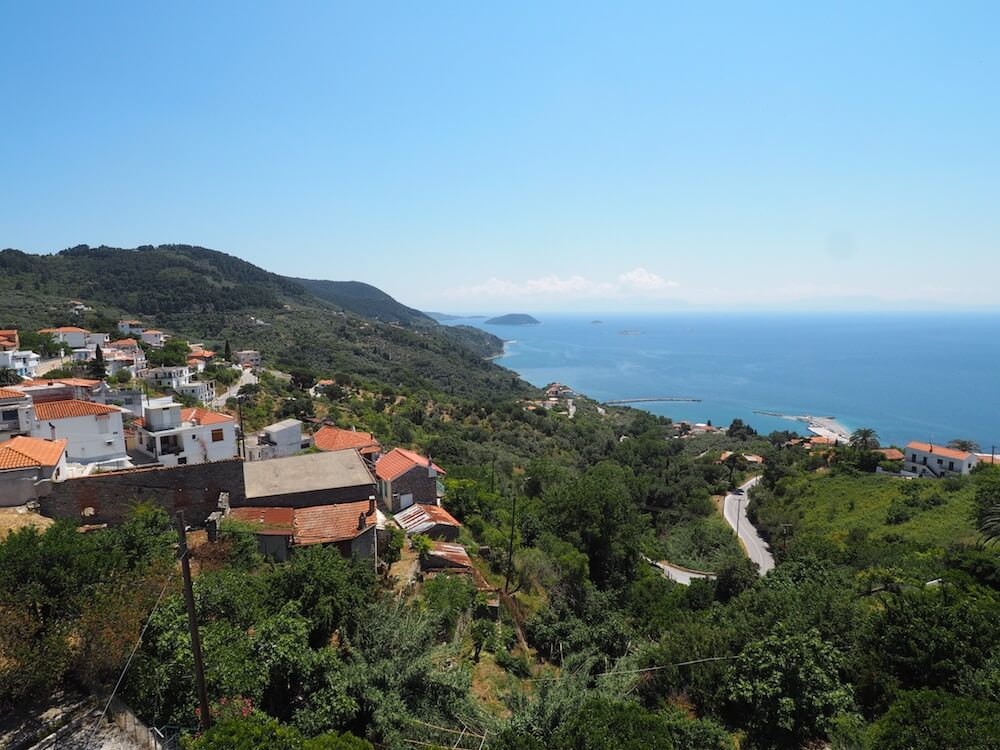 Ok, number one place to eat in Skopelos is in Glossa, high up in the mountains. You have to go to Agnanti Restaurant. An absolutely beautiful setting carved into the cliffs, and delicious food too. You can see more of it in my guide to the food in Greece. I had prawns and then chicken, and with every mouthful I couldn’t help but appreciate, vocally. Probably annoying for the fellow diners, but whatever.

You’ll need a car for this. 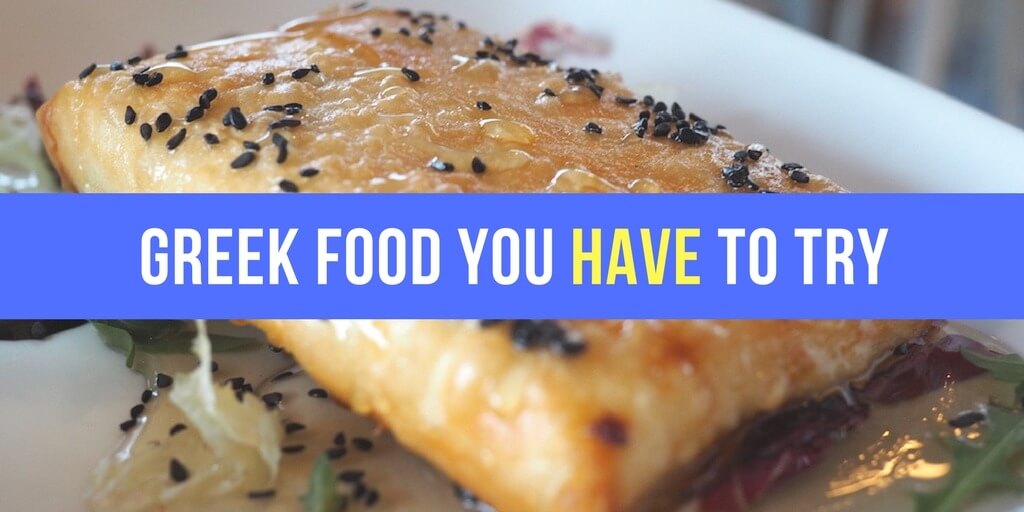 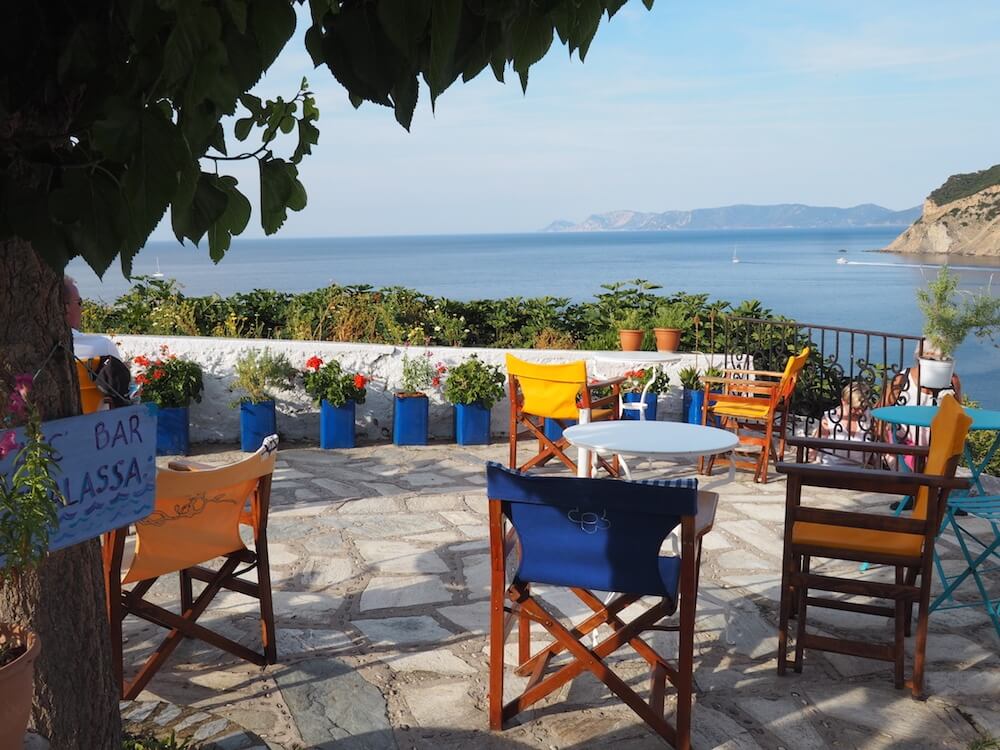 We were introduced to this awesome little tavern thanks to the walking tour we did with Dolphin Tours, see below. In May it looks out to the sunset, making it the perfect spot for a cocktail. Although, when we went they were only doing beer. The owner is a grouchy sod who doesn’t like you to take photos of the actual bar and flipped out at someone for asking if he had WiFi, but it’s totally worth handing over your beer money to him to sit and admire the view. 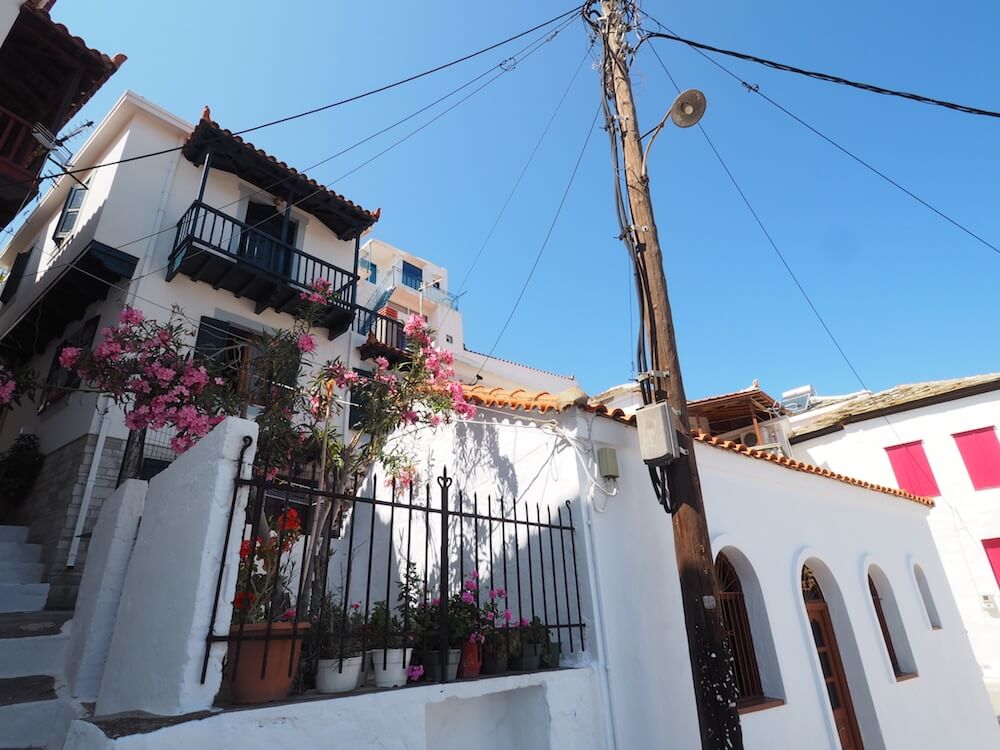 Skopelos is beautiful. You just need to wander the streets for a few minutes and you’ll find classic Greek street scenes just waiting for you to snap them. Me and Jayne had so much fun taking photos here, I felt the need to compile my favourite Instagrammable spots in Skopelos – coming soon. 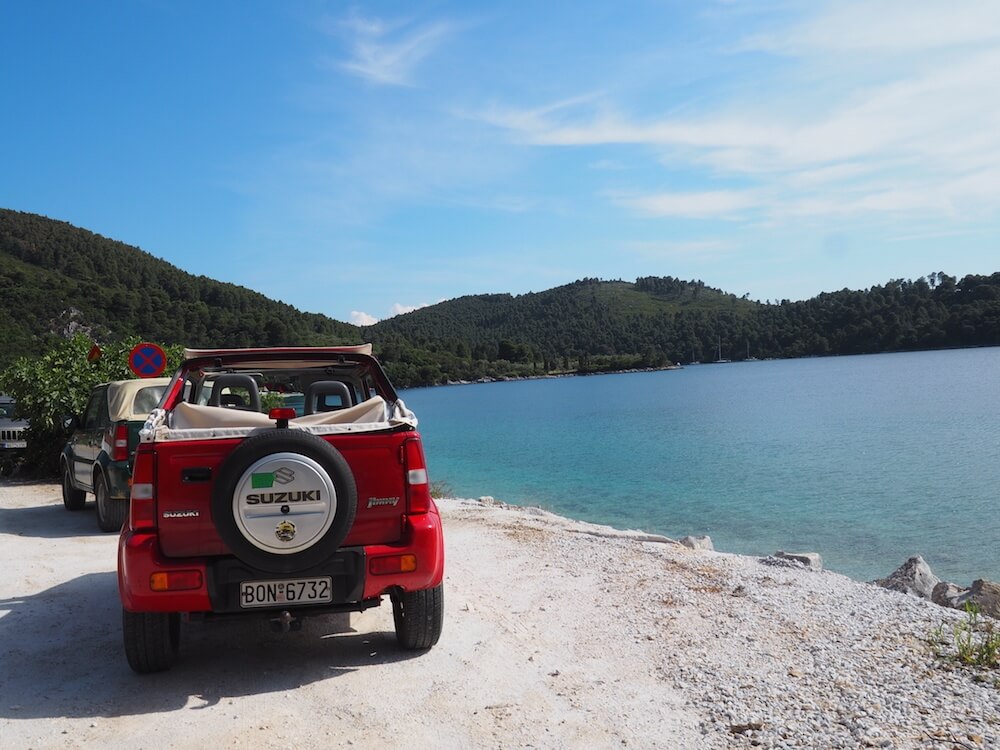 You’ve written down to drive up to Glossa right?

Well, that’s the best place to go because the route to the Mamma Mia Church is sketchy as. So I’m going to use this section as a little warning.

You rent a car in Skopelos and they send you on your way. What they don’t tell you, or didn’t tell us anyway, was just how skinny and dangerous some of the roads are. I strongly recommend that unless you’re an 8 out of 10 and above in skill and confidence, you don’t drive down to the famous church, and just join the Mamma Mia tour instead.

We went to Skopelos in the last week of May, just on the cusp of the season starting, while there weren’t too many cars on the roads. Luckily, The road that extends to the church is thin, really thin, probably half the width that you want a road with a 30 foot death drop to the side to be. I was lucky and made it (almost to the church – we turned round at the first opportunity) without a car coming the other way. I was driving in fear that I’d meet one any second though. It wasn’t fun. If I’d have had to reverse there would’ve been tears, Jayne’s first judging by her yelps, and then mine.

The road down to Kastani Beach is probably the steepest road I’ve ever driven – and I learned to drive in Sheffield – and the ones up to Glossa are very windy. Hairpin bends and everything.

Just be careful, and remember that some of the cars you do meet will be confident locals, going faster than it looks like it’s safe. I’d still recommend you hire a car, because it’s the best way to get a good look around, but just so you know before you set off.

It was an adventure. 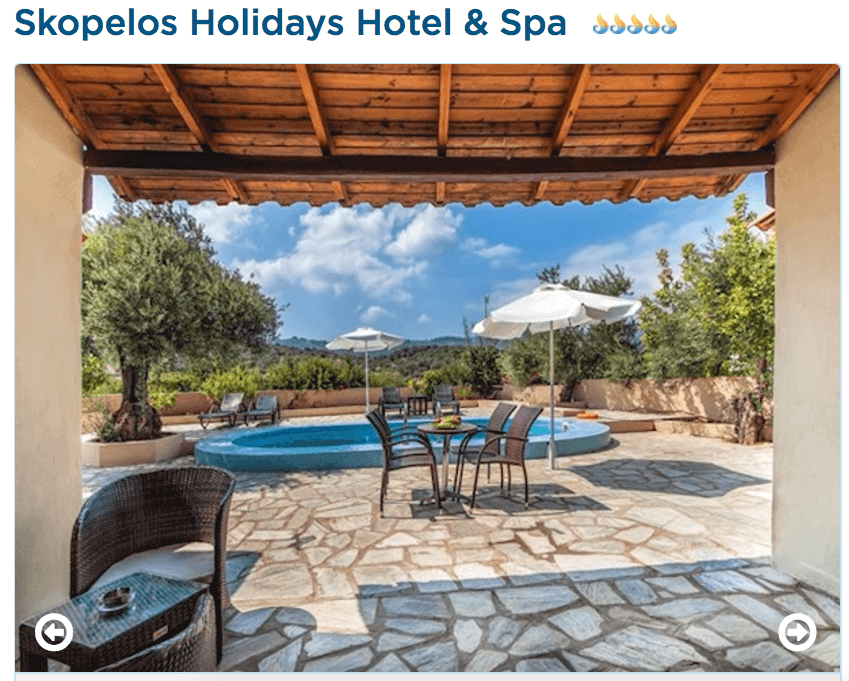 As I’ve said, the season was just kicking off here when we arrived and so most of the hotels weren’t open yet. We ended up staying in a bizarre Spanish-themed hotel, that to be honest I wasn’t too sure about. From looking at the rest of the Olympic Holidays offerings, I’d recommend you try and get in at the 5-star Skopelos Holidays Hotel & Spa. Looks lush. 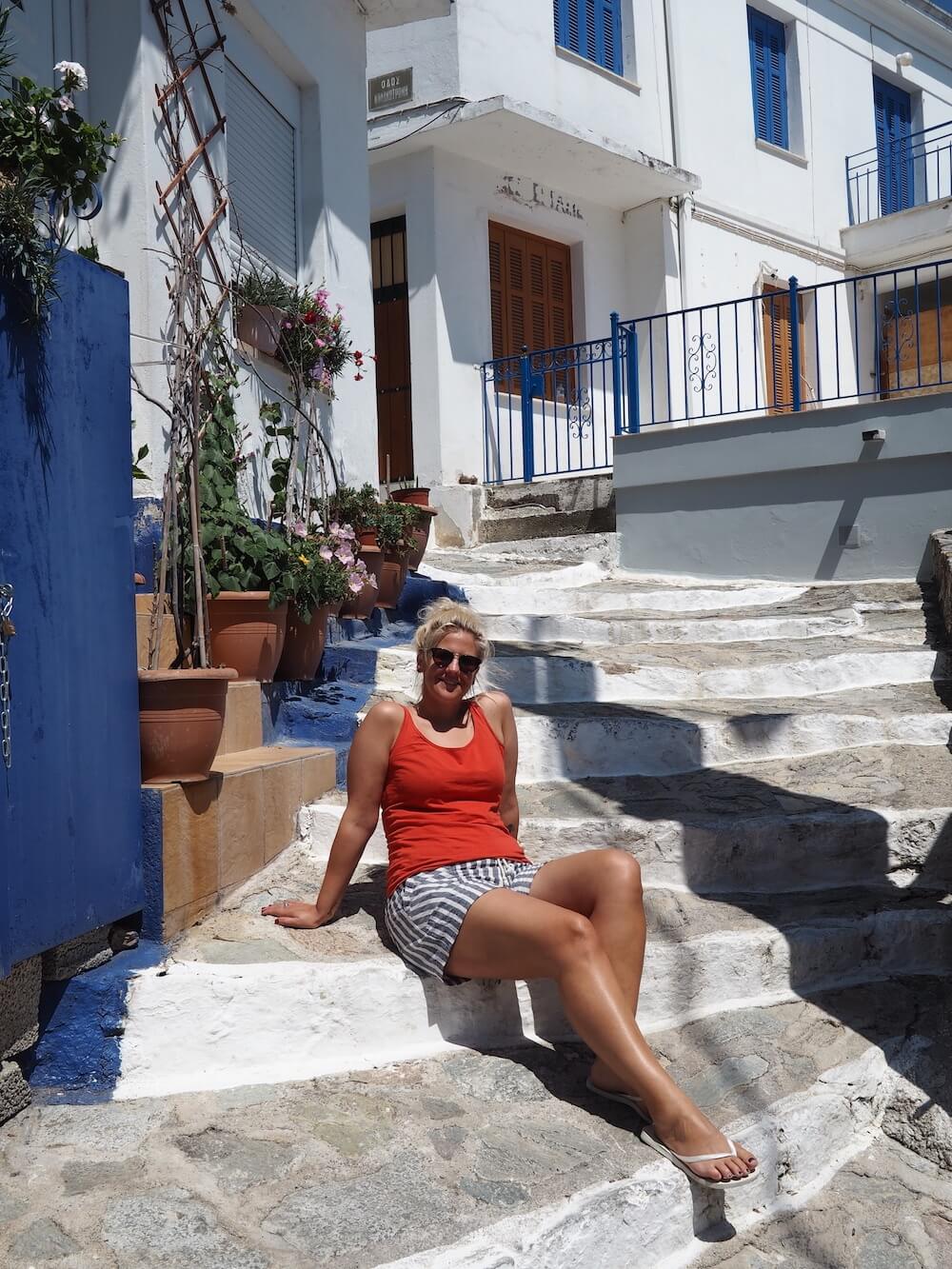 Combine your trip to the Agnanti Restaurant in Glossa with a little shopping trip. There were so many pretty shops up the top, from Greek food and drink, to Greek fashion and pottery. I’d definitely recommend you spare a bit of time for a few purchases, maybe a lovely post dinner walk?

Unfortunately we didn’t have much time to look round here as we needed to get back for our wine tasting (tough life). It was probably a good thing though. Too many beautifully designed things to ‘invest’ in. 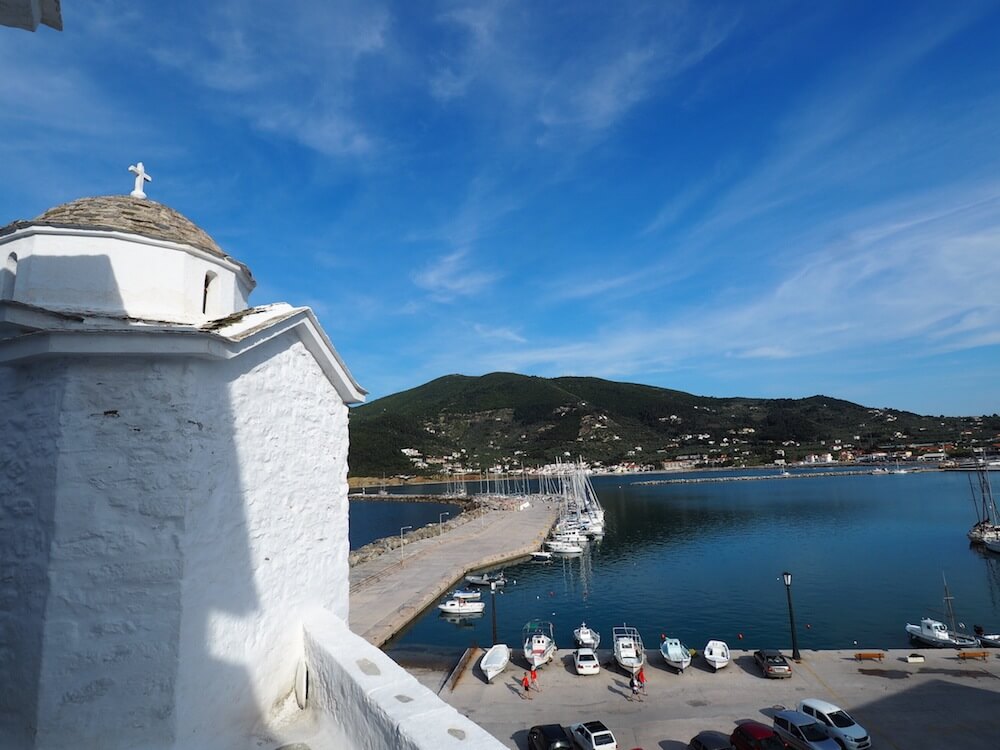 I’d totally recommend doing the walking tour with Dolphin Tours to get an idea of the city layout. Do it on your first day. It might seem like a bit of effort at the start, with all the steps, but we got to see loads of cool spots we wouldn’t have known about without it. When you’re climbing all those stairs for the best views just remember that wine tasting and food is waiting for you at the end.

You get to have dinner at a restaurant on the waterfront, starting with a wine tasting, and ending with one in our case too. Amazing value! 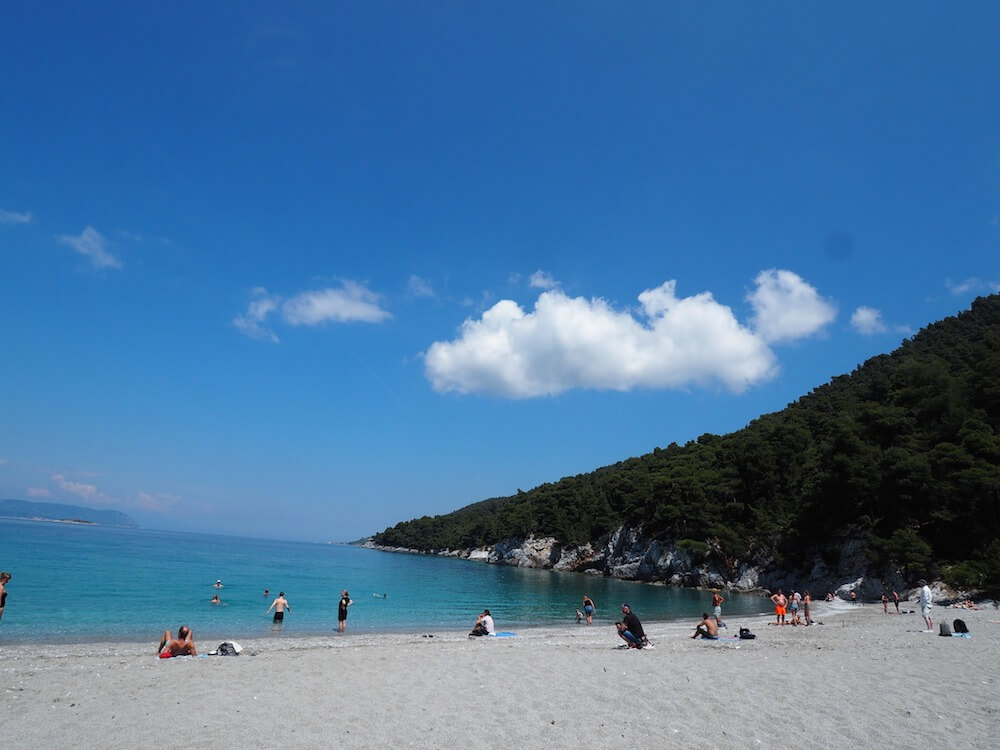 Mamma Mia was filmed here, just in case you haven’t quite gathered that yet. It’s what Skopelos is famed for. Because the island is so small everyone knows someone who was involved in the filming. Love a bit of celeb gossip me. So, apparently… Colin Firth was a right laugh. He liked a drink and one night went out and partied so hard he left his shoes in a bar. Oh Mark Darcy, it makes me like you even more.

There’s going to be another Mamma Mia film in 2018, so everyone was very excited at the recent news. Hope they film it on Skopelos again!

I went island hopping courtesy of Olympic Holidays for a week and had a great time. All thoughts are my own, obviously.

The Food in Greece You Need to Try