Zeno had already woken me once. His cheery ‘coffeeee’ call had roused me at 5:30am, as requested. I’d planned to accept it at my lodge door, fabulously robed in the traditional print dressing gown that came with the room, as I had the day before.

Just 24 hours ago I’d opened up the hamper, found the freshly prepared coffee and homemade biscuits, and taken them out to indulge on my veranda, while watching the impalas, squirrels, mongoose and baboons bring in the day. Today though, all I could so was to yell for him to ‘leave it outside please’ from my bed, while I desperately grasped at another ten minutes sleep, hoping it wouldn’t make me late to meet my group. I couldn’t give in to it though – I was restless thanks to the ambivalent sounds of the Liwonde National Park wildlife right outside my luxury lodge, with just a mesh in the windows to separate us.

The night before I’d been getting ready for dinner under the low voltage lights of my room when I heard a rustling in the dark outside. A rustling that was undeniably getting closer. The rustles turned into the sound of chomping; the closest sound I could relate to it was a horse chewing on hay. But there are no horses around Mvuu Lodge – hippos, elephants, warthogs, impalas, baboons and black rhinos, yes. But no horses.

I was spooked. Which one of the impressive array of African Wildlife was it then? I’d tried to look outside with my iPhone torch, pathetically pointing the light towards the black abyss with my heart pumping fast. I was too scared to actually stand out on the veranda, but hid behind the perceived protection the mesh offered. There was definitely something there. I grabbed the torch from the wall to see the size of the animal I was dealing with, remembering there was an emergency fog horn on my bedside table if it came to that. 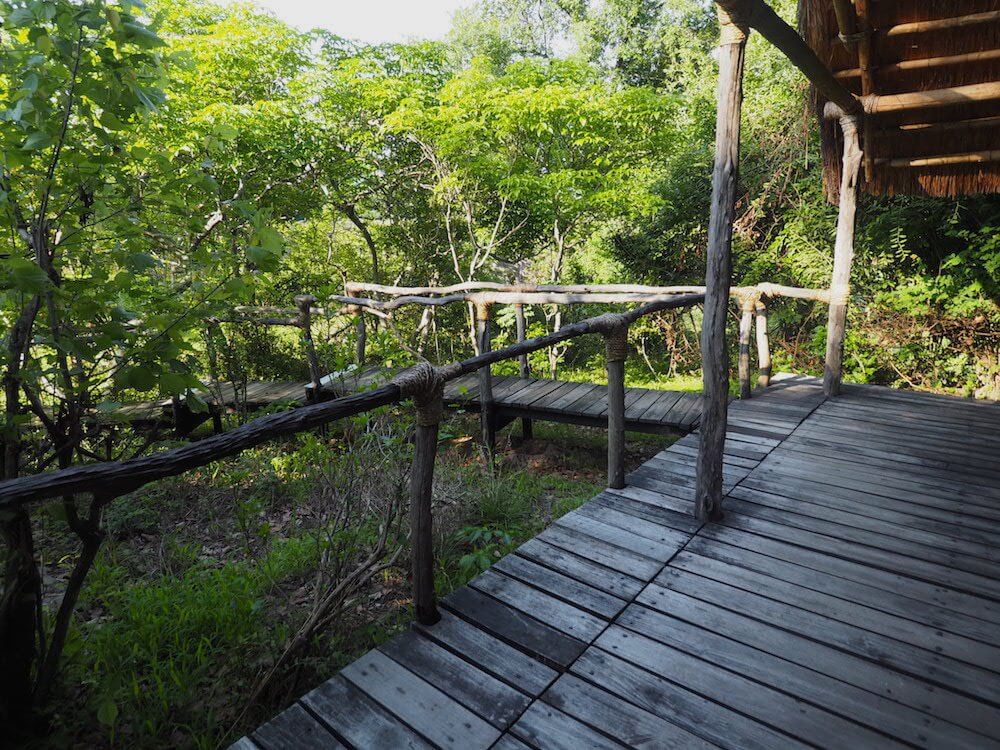 Thankfully as I cast the light over the wooden bridge leading to my secluded lodge, the welcome sight of one of the guides coming to pick me up for dinner settled my paranoia. At Mvuu Lodge you’re in such close proximity to the wildlife, it’s forbidden to walk around alone when darkness falls and he’d arrived right on 7pm to guide me through the wilderness.

As soon as I arrived at the family-style dinner, two of the other guests from the lodge visible from mine told me they’d seen three hippos outside my room as they’d left, not realising I was inside.

That morning, in my half awake state, I remembered their story from the night, which meant there was no way I could fully relax into the ten minutes of extra sleep – no matter how much I needed it. A minute later, or so it seemed, my alarm buzzed for the final call. I was up. Eyes still adjusting to the light I grabbed my towel and stumbled to the door, towards my own private outdoor shower.

This was my weapon against the fatigue that had set in after a week of early starts and full days exploring the best of Malawi. I stumbled out the door, to walk the ten steps round the corner… and was met by a huge adult elephant bounding out from the trees just 25 metres away. I reared, transfixed – part amazed, part panicked, while the blogger in me demanded I grab the camera. I darted in and out the room as quickly as possible. Standing on the balcony, wrapped in my towel, wearing flip flops and hair haphazardly piled on top of my head, five adult elephants trundled past as close as 20 metres, with their two baby elephants in tow. Wherever they were going, they had no time to stop and moved faster than any of the tens I’d seen in the last few days. The morning rush. I managed to capture a hazy electronic memory on my camera, results are above, but the real life one is firmly imprinted on my mind.

After the video I tried for a photo, but unfortunately the fact it was so early, and I was destined for the shower, meant I had no glasses or contact lenses and the selfies I thought I was taking with the small herd turned out to be a grey mass of stones where the elephants had once passed. Look how excited I am though – bless. And so, on the final morning at the Mvuu Lodge, and of my weeklong trip to Malawi, I arrived at breakfast full of the excitement of my shower experience. I finally had a story over those German guests at the lodge who’d mastered the irksome and international art of Safari one-upmanship.

I visited Malawi and Mvuu Lodge courtesy of Malawi Tourism and South African Airways. They fly to Malawi via Johannesburg, with prices starting from around £694.

My Top 7 Places to Go on Holiday in 2022
← Previous
My Incredible Malawi Safari in Liwonde National Park
Next →
Click here to cancel reply.