Liwonde National Park was the last stop on my week in Malawi. I’d had a great week featuring elephants, hippos, some amazing food and beautiful Malawi accommodation, but without a doubt, it was my time at the Mvuu Lodge that impressed me the most.

I loved it there. We arrived in the vicinity for our second Malawi safari of the week (the first had been in the Nkhotakota Reserve) and seeing as the Mvuu Lodge is only accessible by river boat, we hopped in, along with all of our suitcases, and took off to the lodge on the other side of the Shire River. Within seconds the hippos were bobbing their heads above the water to eye us up. The familiar click of the camera shutter from my fellow travel journalists started. I have never seen or heard so many hippos as I did in the Liwonde National Park – their laughing grunts were infectious. I arrived at the jetty to the lodge already over excited about the amount and variety of wildlife I was going to see at Mvuu Lodge, nestled in the woodlands and dry savannah of the 548 sq km Liwonde National Park.

What to Expect on Safari on the WouldBeTraveller

So, the important question for anyone looking to find the perfect Malawi safari for them – which animals live in Liwonde National Park, and which will you see? According to Malawi Tourism, who’d helped organise my trip to Malawi, the Liwonde National Park is home to: On my Malawi safari at the Liwonde National Park I saw all but the lion (very rare), the black rhino, leopards and hyenas. I’ve been on safaris before – in Kenya and South Africa – and I never expected to see so many animals in Malawi.

And these weren’t just one sighting, or a herd sighting in among the trees. I’m talking right in your face, tens of crocs, hippos and elephants, both days I was there. We also saw a dazzle of zebras – AND THEY’RE NOT EVEN ON THE LIST. Too exciting.

New favourite animal – look at them…

We were eating lunch and three elephants appeared through a clearing in the trees. We had a meeting with Ben from African Parks, about their plans for the future, and three hippos were just strolling around outside the bar. And of course, my favourite, I was about to go for a shower when seven elephants appeared just a few metres away.

And, we saw tens, maybe 50, baby crocs, while on a boat safari. Unfortunately the 50 quickly became 49 when a fish eagle swept down and grabbed one in his claws, flying off into the distance for a delicious lunch. Circle of Life and all that. 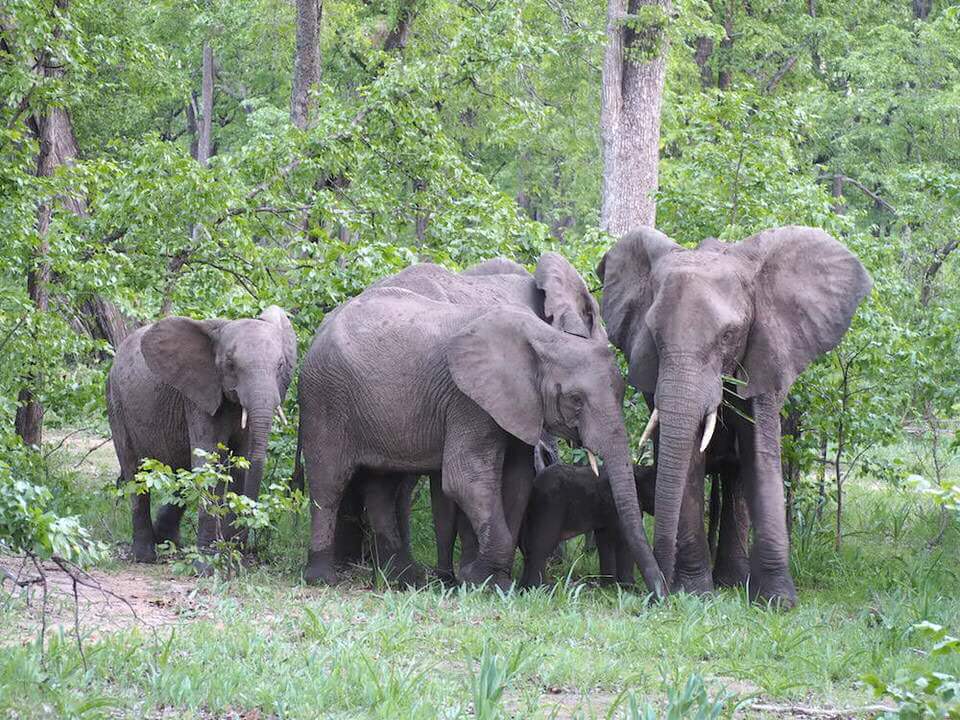 Liwonde National Park is a unique place to see game, thanks to the river flowing through. This means you can go on boat safaris, and the animals come down to the water to drink and cool down. These were my favourite experiences in Malawi. We went on a game drive on the first afternoon we were there – from about 4pm to 7pm – with a stop for sundowner Malawi Gin and tonics by the river at the end.

We also chose to go on an early morning boat tour up the Shire River, and then a sundowner one that day too. The boats were great for catching a breeze in the sweaty heat, and, most importantly, for seeing the animals. There was also the option for a 5am birdlife and bug tour, which, I didn’t take up. Instead watching the wildlife from the comfort of my verandah with a coffee in hand.

Much more civilised at that hour.

The entrance fee to get into Liwonde National Park is one of the lowest of all of Africa’s Parks.

Vehicle Entry Fees – US$5 per day

‘Mvuu’ means ‘hippo’ in Chichewa, the local language, and if you stay at Mvuu Lodge or Camp you’ll see just how apt that name is – hippos are everywhere. One night they were even just outside my chalet, chomping away and scaring the heeby jeebies outta me.

At Mvuu Lodge you’re not allowed to walk around by yourself after dusk. While wandering in the day I saw warthogs, bucks, elephants and mongoose just wandering around in the lush green setting.

My room at the Mvuu Lodge was incredible. I’ve stayed in a lot of hotels, in a lot of rooms, but this place, jeez, honestly – felt emotional. I had a huge kingsize bed, surrounded by a mosquito net that they would put down for me in the evening. There was a safe with a fog horn and an array of bug sprays for me to use in emergencies. Coffee making facilities came as standard and the hot water was replaced. I had a shower inside AND OUT, and a separate toilet. I also had two sinks with a large mirror displayed above and a little seating area indoors too. There was a verandah going around my room, with seats and a table, and space for a hammock too. Unfortunately it wasn’t up when I was there but probably for the best – you wouldn’t have got me out of there.

My lodge was number 7, which was one of the furthest away from the main dining and bar areas – both brilliant and scary. It took about five minutes to walk down in the morning. I loved the adventurous start to the day. – This is the bar, overlooking the river where the hippos hung out

The food at Mvuu Lodge was great. We’d sit round family style at night with the other guests and get what we were served. One night chicken, the other pork, and lunch was a tasty buffet featuring delicacies like spinach and cheese pasta, tuna fishcakes and salads. For breakfast, the traditional full English was on offer and you could pick and choose as you pleased. One last highlight, although I didn’t actually make it in thanks to time, was the pool. Just a little one (good, given the water problems in Malawi) it was the perfect spot to cool down. I sat around it drinking Amarula instead.

If you’re thinking about going to Malawi on safari, I would absolutely, 100%, recommend staying at the Mvuu Lodge in the Liwonde National Park. It’s opened my eyes to just how plentiful and beautiful the wildlife in Malawi actually is, and the encounters were incredible!

I visited Malawi and Mvuu Lodge courtesy of Malawi Tourism and South African Airways. They fly to Malawi via Johannesburg, with prices starting from around £694.

We just returned from our day in Liwonde National Park with lunch at Mvuu Lodge. It was great. It should be on everyones bucket list. You won't regret it.

Oh I'm glad you had a lovely time! It really is an amazing place isn't it? Hope you saw some elephants!

Wow! such a stunning beauty of national park. Lovely captures. Thanks a ton for sharing.