My first Edinburgh Festival Fringe experience was every bit as barmy, avant garde and inspirational as I hoped it would be.

I think the stand out moment – as you may have seen on my Instagram Stories – was when one of the performers of Queen C*nt – Sacred or Profane? (sic) squirted her breast milk on the front row, for the show.

She was playing the character of an overwrought Mary, Mother of Jesus. Apparently he’d been ‘crying all night’, no one cared and her body had changed beyond recognition.

I’m no prude but I’d honestly never seen anything like it. The messages under the wonderful weirdness were of course powerful, but the delivery was quite a bit to take. I wouldn’t want any actors bodily fluids sprayed on me, no matter where they came from.

Neither did the front row – they walked out, a few seconds later.

It was kinda my fault we’d been sent to see this.

We were at the Fringe thanks to Edinburgh City Festivals. They run 5 festivals in Edinburgh in August and they’d invited me and my housemate and fellow blogger Emily up to experience a few of them. They asked what kind of shows we wanted to see, and as I look back to my answer, apparently I’d replied ‘the filthier the better’. 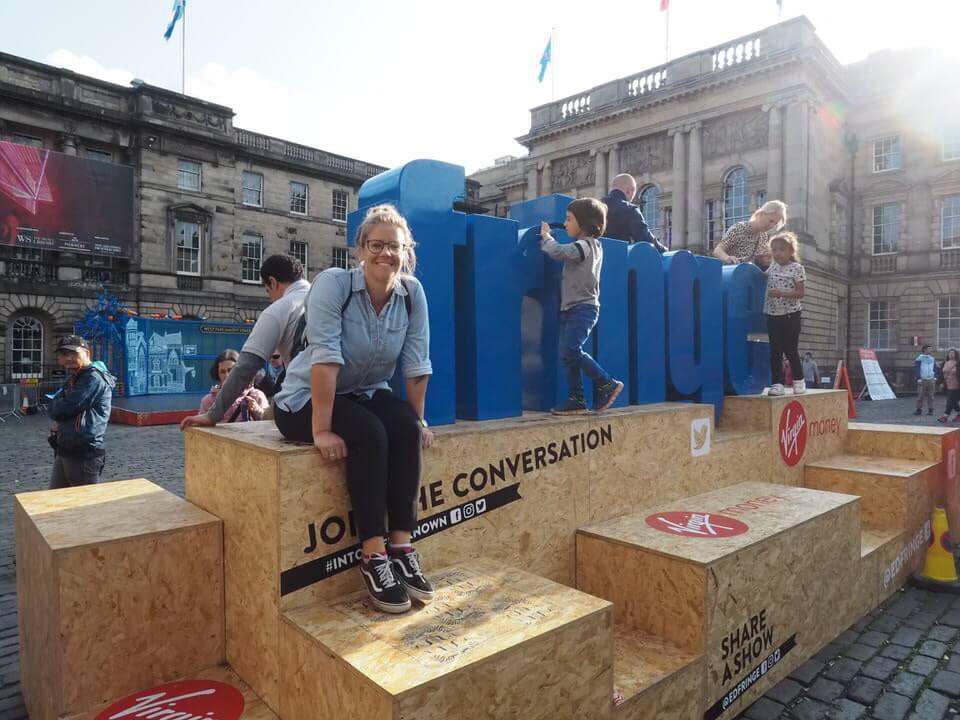 Well, not quite, but that’s what I meant. I’d actually said ‘the more 18+ the funnier’ – a politer way of making sure we weren’t going to have to sit through any experimental dance pieces.

Instead we got that ^ and the following…

My favourite show of the Fringe Eleanor Morton gave us my favourite show. Funny, clever, intelligent and angry about the absolute discrepancy between how men and women are treated on TV, in comedy, and in life. Her arguments were carefully crafted and the whole hour-show brilliantly put together. Genuinely could’ve watched at least another hour of her, and I hope to see her achieve the dream of being on a comedy panel TV show one day, if the men ever move up to let the women in.

My other favourite Fringe show

God this was brilliant. Do you ever look at someone / people, and think HOW did you make this from your mind?

Kinda like the guy who created the Internet, but maybe not quite that epic. Anyway, these three guys, and Rosie, were SO funny. Sex Shells put modern issues – think gentrification, yummy mummies, allergies – to the tune of pop songs and Disney tunes. So funny, and so clever.

The rest of the shows

An incredible performance from non-white Australians, which, I realised and they pointed out, you don’t see much of outside of Australia. The whole show was based around a massive hive with Queen Bee at the top. An amazing commentary on feminism, motherhood and Australia bound up in danc, singing and clever performance.

Hot Brown Honey was crowned one of the best shows by the critics at the Edinburgh Fringe 2018.

Basically a panel of comedians answering your problems in a comical way.

Just to note, if you go to the smaller venues, be prepared to be picked on. Emily and I snuck into the back of the show, with our gin and tonics, eager not to be seen. Alas, they picked up on our orange press passes which we’d stupidly worn round our necks (mine was hidden in my bag from then on).

Banter ensued. They found out we were bloggers. And then one of the guys on stage started reading through my comments and mocking me, I mean, it was hilarious / wanted the ground to open up. He asked if my surname really was flipflop, I said a stone cold yes and that seemed to shut him up for long enough to move on.

Loved it. Ended in a ‘Time of Your Life’ lift and us doing the conga out of the room.

Just keep scrolling to get past the reviews btw – if you’re looking for practical advice. Thirsty means gagging for it, if you wondered. I didn’t know either.

Anyway, we were tempted in off the street with a 241 offer to see her. And after being told that going to see a show off the cuff is all part of the Edinburgh Festival Fringe experience, we went for it.

Her kinda comedy was fabulous New Yorker, drinking from a cocktail shaker on stage, talking about ‘the gays’ offensively (so my gay and straight friend I was with agreed) and all the typical jokes from a female comedian (weight, one night stands, drinking too much, blah blah). And then she’d belt out a random song in between jokes.

Wasn’t into it tbh.

Comedy in the Dark

Also, didn’t particularly enjoy this one. Another 241 off the street.

Three different comedians came on stage, one after the other, and you all sit in the dark and listen. There was some drunk guy in the audience who thought he was hilarious and kept shouting out, and the last comedian was actually a group who also shouted over each other and didn’t let the other one speak. Annoying. Oh, she was GREAT. Can’t believe this was free. She’s famous for the ‘If Harry Potter was Scottish’ viral video that I’d never heard of. She was very funny and had a huge crowd laughing their little socks off. Ended in a 5-minute call out to go for a smear test, which was good of her.

Yes, those two off the Nationwide advert. I love this advert, although I never knew their names so didn’t actually register who we were going to see until Emily said she’d ‘just realised something that will make me very happy’. Yay.

Am I allowed another favourite?

And they were SO good, and SO clever, and SO funny. I just don’t understand how people are so talented. Their comedy style music is just brilliant. I just looked them up on YouTube and although they didn’t play the song above at the show I went to see, I recommend you watch it. Very apt for this blog and gives you a good idea of their genius!

And that was my Edinburgh Fringe Festival 2018!

Costs of the Edinburgh Fringe

You can do the Edinburgh Fringe for free, if you like. There are so many free shows during the festival, you can just hop between them.

Although, as my first Edinburgh Festival Fringe experience, I learned at the door out of Ashlee Storre with no cash, and a bucket thrust in front of me, you are actually meant to tip the free shows too. 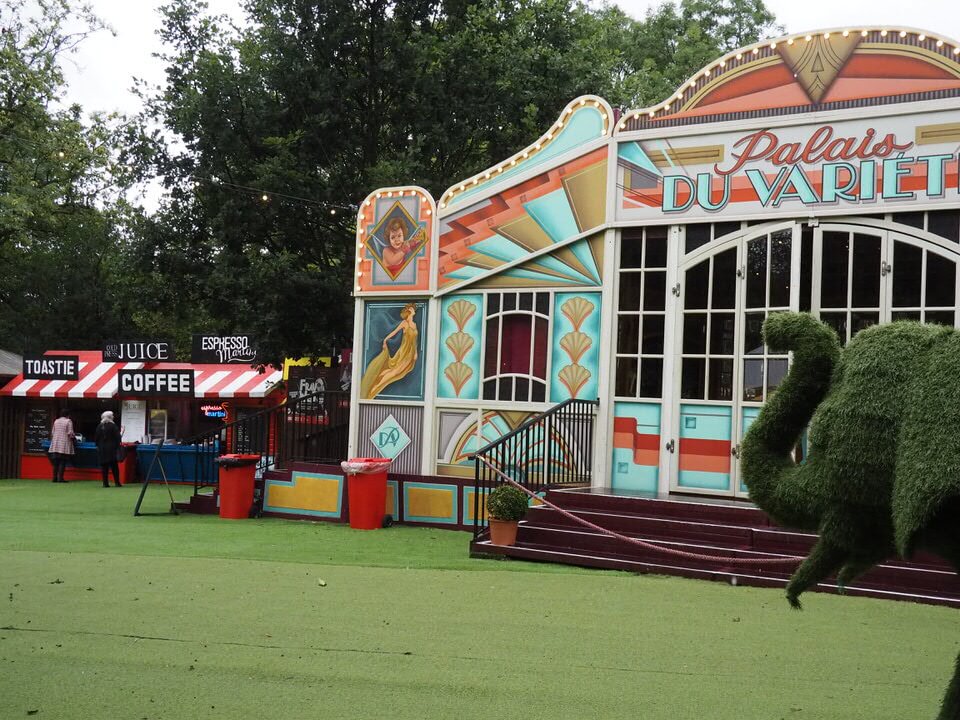 The shows we saw listed above were between £5-10 and all the tickets, bar the Comedy in the Dark and Tori Scott, were bought beforehand. Hot Brown Honey and Flo & Joan were sell outs.

If you’re buying off touts on the street (perfectly acceptable) then ask if there are any discounts. We managed to get 241 this way, with a ‘magic word’ at the ticket desk. Drinks were £5 a drink and you could pick up food from the festival stands from around £5. Of course being in a city there were plenty of cheaper options around, if you like.

Our accommodation was £250 for three nights for a double room in the university.

Food at the Edinburgh Fringe

We had a few foodie recommendations to check out but with Edinburgh being so busy they were all popular and we didn’t want to waste time queueing.

I can definitely recommend the many choices at the George Street Food Market though. I enjoyed veggie gyozas here, and a pulled pork bagel. It’s a great spot for the festival when the weather’s nice. Lots of food and drink options and place to sit. 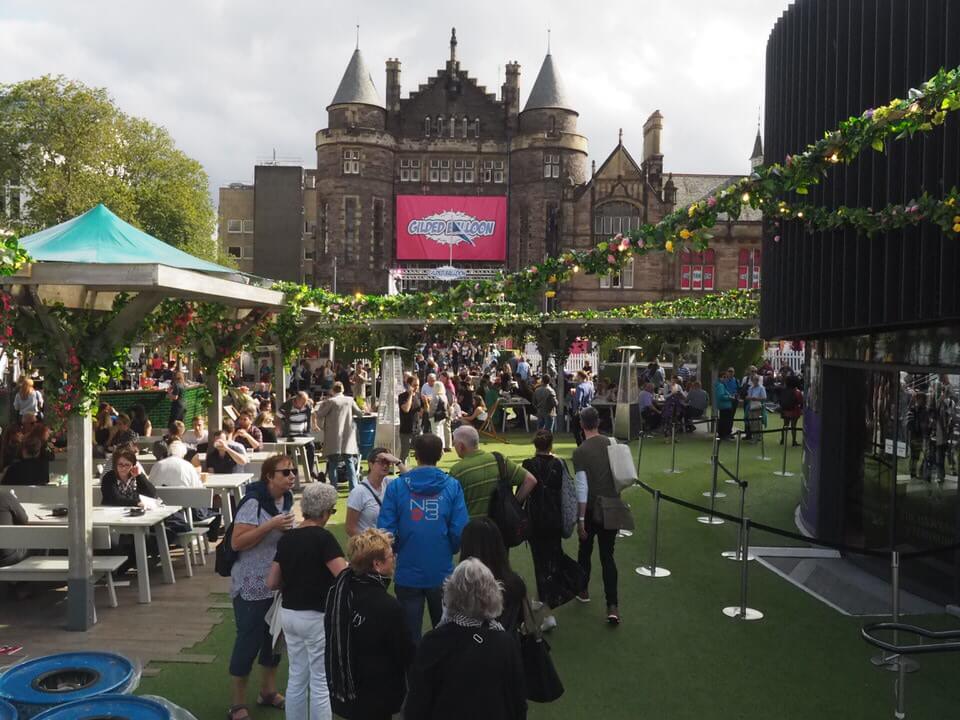 We enjoyed Taco Tuesday at Barburrito, with delicious tacos and nachos for just a fiver.

Also, the Dovecot Gallery Cafe makes a good pastrami sandwich, and an avocado cake, and that way you can check out the Edinburgh Design Festival there too. There’s a little restaurant / takeaway place on Victoria Street, called Oink, that serves amazing pulled pork baps. Great price and so, so tasty. It’s all they serve, in a few variations.

And also, when you’re on your way out at Edinburgh Airport, order the poached eggs and avocado at The Gathering. Genuinely thought about the deliciousness of the avocado a few times since.

Other things to do in Edinburgh during the Fringe August is THE month to be in Edinburgh. There are five festivals on for you to experience, and some of them free. I went to the Edinburgh Arts Festival at the Modern Arts Museum and at the Dovecot Studios.

There’s also the Edinburgh Book Festival where you can see your favourite authors doing signings and readings, and sit and enjoy some cake and coffee. Great spot for kids there too. You absolutely have to go to the Royal Military Edinburgh Tattoo if you’re in Edinburgh in August. I went and it was an incredible experience. You could check out the top cocktail bars in Edinburgh, as decided by me. And, if you have the time, why not go on a Scotland road trip afterwards and explore more of the beautiful country. I’d definitely recommend you fit in a trip to the Isle of Skye if I were you!

Getting around the Edinburgh Fringe

Once we were in Edinburgh it was easy to walk to almost everything. We did get two taxis, but that was just out to the Museum of Modern Art and back, which was a little out of town. From the Airport we got the number 300 bus, which took FOREVER, so on the way back we got a locally booked taxi for HALF THE PRICE of an Uber, which had a 4x surcharge on. Took about 25 mins, rather than an hour and a half on the bus. Cost £25.

Accommodation for the Edinburgh Fringe

We stayed at Salisbury Court – a university halls perfectly located for the Fringe. I had a desk, queen size bed and my own bathroom. No frills, but nice and clean and warm. Everything I needed given I was out all day. 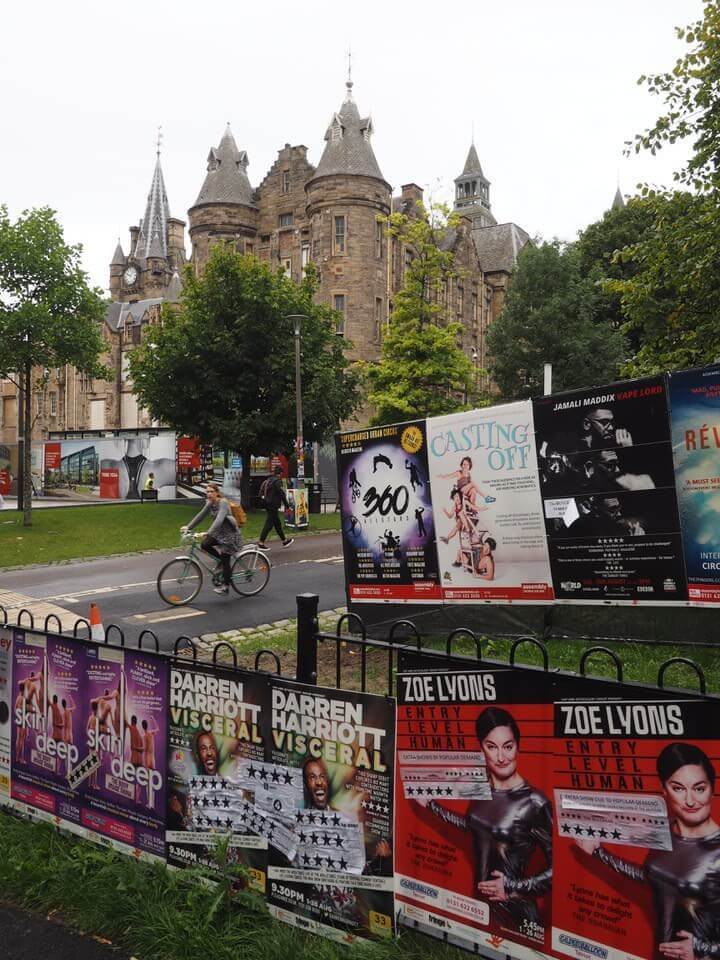 If you want to go to the Edinburgh Festival Fringe next year you need to start looking at your accommodation now, as things get crazier the closer you get. As soon as the reviews start coming out, book into the shows, although there will always be more shows you can see. I’d go in the middle of the month if I were you, that way there’ll be some reviews out and you can make sure you see some good things, although I was told it was all part of the experience to see something a bit pants!

Make sure you book shows all over the city, part of the fun is to see the different locations!

I was in Edinburgh thanks to Edinburgh Festival City. They sponsored my flights, accommodation and some shows, in return for a review on my blog.