12 Best Things to Do on Skye in Scotland, Making Me Want to Go Back ASAP

If you’re looking for the best things to do on the Isle of Skye, let me take you through my recent trip.

I took approximately 1000 photos and videos during my three days in Skye, admittedly I’ve just bought an iPhone 6s and many of those were accidental on the ‘Burst’ feature, but still, it’s taken me a while to look through them.

Skye is one of the most scenic places I’ve ever been. Every way you looked there was more Instagrammable beauty luring me in, tempting me with its brown hues, purple fauna and every-blue-on-the-spectrum waters. The earthy autumnal colours of the land from a mild December made for a beautiful palette, and the area had recently been shaken up by the passing Storm Frank just a few days before giving a rugged and rough look, although when I mentioned it ‘the look’ is apparently standard.

We were lucky. I went 2-5 January and the visibility was perfect. We could see out to the other islands from our viewpoints and the rain held off. The cold wind though, jeez, I took some videos and you can’t even hear what I’m saying the wind is carrying my voice away. I was worried I’d get blown away at some points – good job I ate all those delicious fish and chips and Highland beef burgers along the way to keep me grounded. 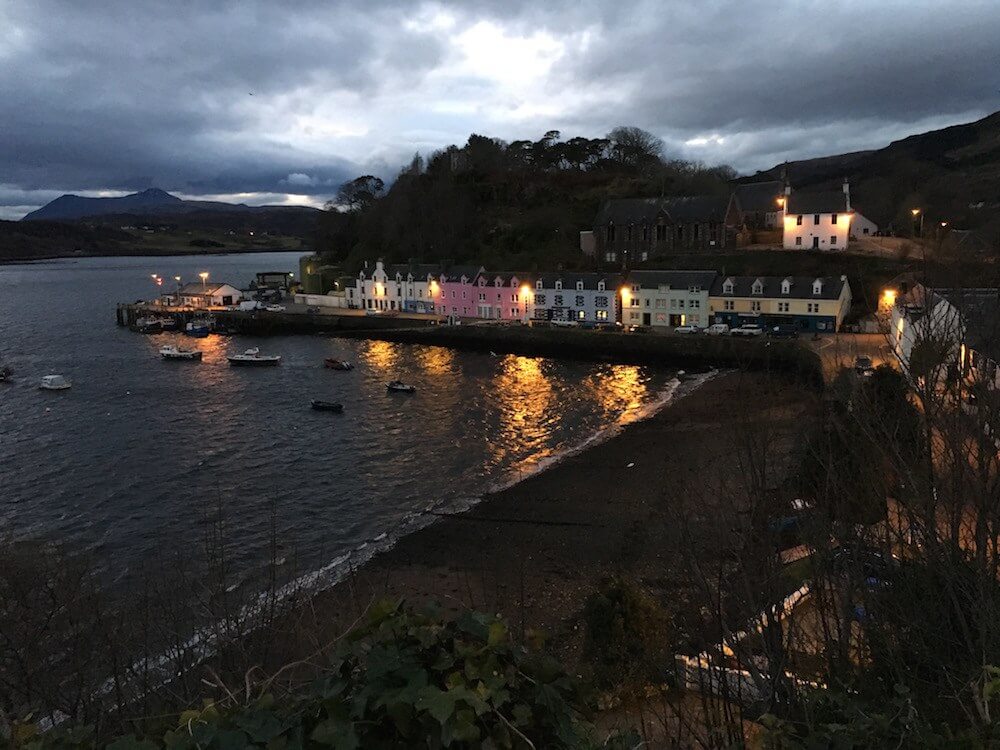 12/ And Neist Point again, the pathway

Isle of Skye with Rabbies

I was travelling in a group with Rabbies – their USP is that the van is a 16-seater so compared to the big Highlander tours we saw going through we were more nifty, able to stop where we wanted and go to lesser known spots, such as the Fairy Glen for example. It also meant we were quicker at rest stops, with less people to hang around for. I did the three-day tour, it was a lot of driving but the fact that I wasn’t responsible for any of it meant that I could just relax and look out the window at the incredible Highlands rolling out in front of me.

Travelling to the Isle of Skye

If you want to travel to Skye independently, and don’t have time for Edinburgh first, fly into Inverness and hire a car. Make sure your Des is a confident driver though, I wouldn’t fancy navigating the winding roads and rogue sheep. The rewards of being able to stop where and when you want will make it all worth it though.

My VIP Hogmanay Experience in Edinburgh
← Previous
12 Incredible Stops on the Ultimate Florida Road Trip in 2022
Next →
Click here to cancel reply.

bringing back so many memories, Skye is indeed beautiful, though in a very bleak kind of way.

Yeah, I know what you mean. It's kind of magical / majestic, but gloomy at the same time isn't it? Definitely want to go back sometime though!

Gorgeous photos - it is an amazing spot. I did a wild walk and foraging there a few years back and these took me right back.

Thanks Cathy. I have SO many more! I'd love to go in the summer, although I think the moody weather was perfect for the pics :)

I know what you mean about taking so many photos, I did the same when I went! It's such a stunning place with so many beautiful places you just can't help it. Love your photos!

Thanks Sara, glad you liked it there too. Seems like quite a few people have a penchant for a bit of Skye!

Damn, these photos are stunning!

Skye has been on our UK wishlist for a while. Those roads have epic roadtrip written all of them.

It was so beautiful, I'm definitely going back one day!

I live in UK and it is incredible that there is such an astonishing place so close to home! Just proves how you don't need to travel half across the globe to see beautiful places. Nice photos!

Definitely. It's really inspired me to want to see more of the UK. Think I've been thinking to big, so much to see round here and you don't even have to step on an aeroplane.