This year, 2015, was the first A Summer’s Tale festival ever, and I was brought in as the official English festival blogger to check it out.

Let’s watch a little video to set the scene… 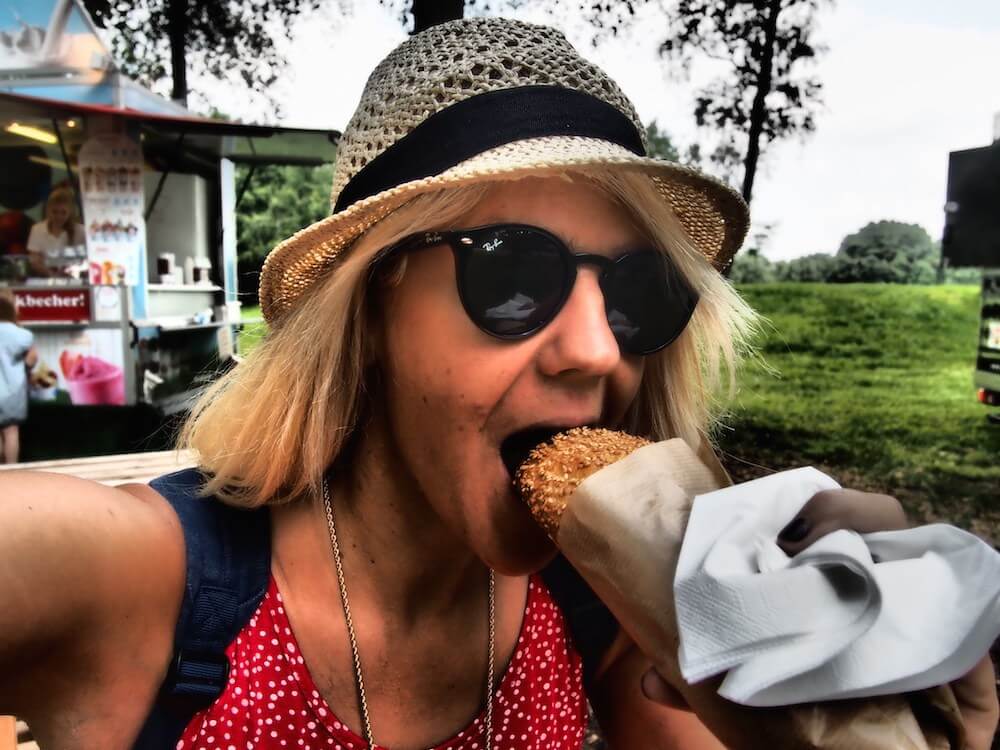 There was so much good food to choose from at A Summer’s Tale – from pulled pork, to stone baked pizzas to Bánh mìs, like the one I’m scoffing above.

One of the best things about the festival for foodies though, was the A Summer’s Cuisine dinner. For €39 you could book on to have a proper three-course meal served in a restaurant style tent.

“Frank Wiechern, renowned Chef and owner of the restaurant Leuchtturm Harburg, invites you to experience exquisite 3 course dinners in our restaurant A Summer’s Cuisine. With every dish we serve a perfect wine, which will be presented by our sommelière Stephanie Döring (tvino).” It was so good. I’ve never done this at a festival before but it was so welcome and unique to sit around and really enjoy the food, at a table (jeez, how old am I?) rather than eating as you go in the main arena.

They weren’t shy with the wine either – this red was perfect on the palette. They did give a full run down as to why they’d chosen this one, but I errr, forget. Another benefit, particularly for anyone going to the festival by themselves, was the opportunity to meet people. I ended up sitting opposite a Scandinavian furniture designer and next to a lady who’s doing a PhD on the social issues facing Nepalese people. We had a very interesting two hours and I was actually sad when it was over. I’ll definitely remember A Summer’s Tale as having an interesting selection at the bar. They’re the first festival I’ve seen that do a ‘Catch of the Day’ as they put it – a chance to show off a unique cider every 24 hours.

They also created a special wine for the event: A Summer’s Tale Weiswine.

They’re also the first festival I’ve ever been to where they don’t have any Pepsi or Coca Cola behind the bar, instead they had Germany’s own sugary mix, Fritz Cola. I tried one mixed with orange juice, just because it was the biggest and I was parched. It was good, wouldn’t be in a rush to have another one but then I’m not really that into fizzy drinks (sans alcohol). To help the world in its quest to survive they charge €1 for every cup that you get back when you bring it back, or you just get it off your next drink. This is such a good idea as they were proper plastic and so there was no crushed plastic on the floor from the usual glasses.

Good on yer A Summer’s Tale! I’ll admit, in 2015 there was no one I was really super excited about – the line up was very folksy / singer / songwriter. Sometimes it can be good though, to go without an agenda, it’s a chance to find new music.

I went through some unknown to me music on the line up and discovered Susanne Sundfør, Young Rebel Set and Alex Clare. There were a lot of cultural performances on the bill too. I sat and watched a play, and a poetry reading, but seeing as all I can say in German is ‘gazuntite’ and ‘wurst’ I didn’t know what was going on. Those particular words didn’t come up much. As you saw on the video one of the best discoveries was the toilet block by the main stage. It felt very decadent compared to recent festival experiences, with all its toilet roll and running water. After that I could see why the portable loos hadn’t been used very much. My fellow festival goers were onto it before me. For a variety of reasons I decided to stay in Hamburg and commute. This was not a good idea. The train is €13, then the bus was €5 (I went at about 9am, there was a free shuttle bus later) and then there was none of the advertised transport back to Luneburg so I had to get a taxi at €45. I asked three different workers if there was another option, but apparently not. Instead, A Summer’s Tale is a festival best camped at. The lovely couple I spoke to at dinner told me the camping was great. Plenty of space, good toilets and pretty chilled. What I saw through the fence backed it up.

This isn’t actually the campsite but some hammocks at the back of the main stage viewing area – I wanted one. 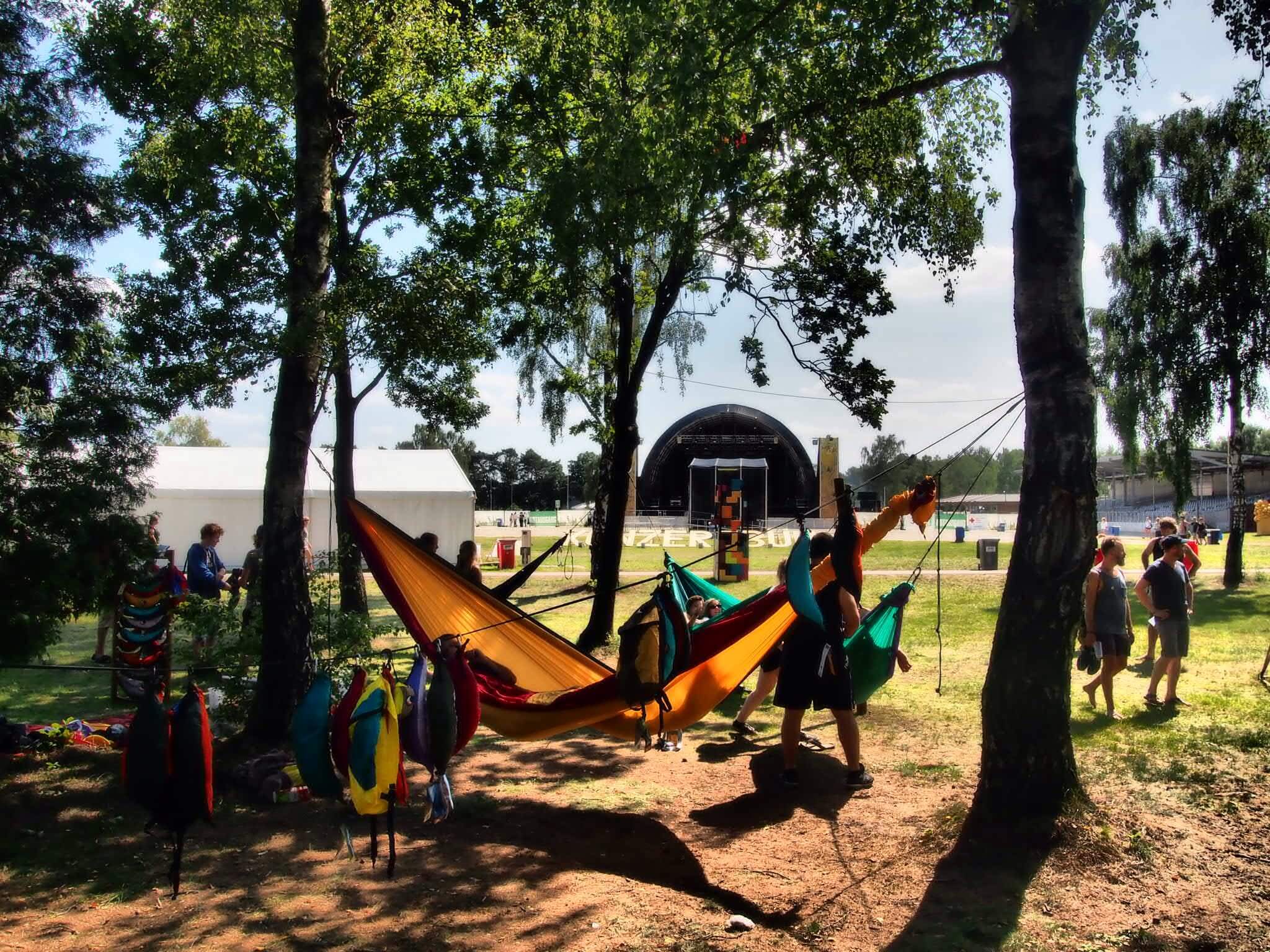 The capacity for A Summers Tale is 10,000, so a lot less than the big festivals I’ve been going to. Someone told me there were only 5,000 on the Wednesday and Thursday too It felt small, I recognised people after day one and kept seeing them around.

I think my expectation of it being a cross between old Glastonbury, Latitude and your local village fete was just about right. I heard on the Summer’s Cuisine grapevine that they’ve signed up to another four years, so if you’re up for a small, chilled, folksy cultural festival, check it out!

I was a guest of A Summers Tale. Tickets cost from €69 for a day and €129 for the full four-day weekender.