If you’re thinking about going to Rock en Seine Festival for the first time, or you are actually going, you need my tried and tested advice in your life.

I went to Rock en Seine Festival for the first time last year, in 2016. I’d had my eye on it for the last few years thanks to the cool line ups and unique location. The clue’s in the name but Rock en Seine Festival is located on the River Seine, in Paris. It’s held in the Domaine National de Saint-Cloud – a park in the west of Paris designed by André Le Nôtre, the same guy who did the Palace of Versailles.

The vibe at Rock en Seine felt very different to UK festivals. It was a classy event – I didn’t see anyone drunk, there was no glitter hair or even neon face paint. It’s a rock festival with elegant Parisian style. 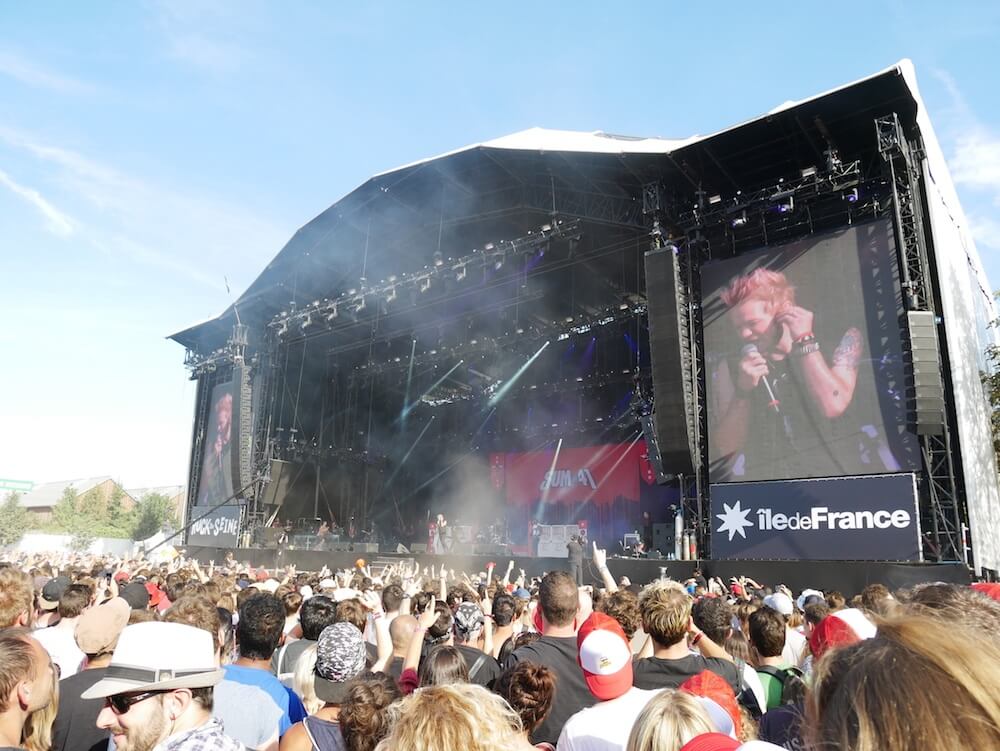 Seeing SUM41 was pretty funny. Memories of being a teenager dancing at our local rock club to Fat Lip came to mind. I stood at the front waiting for them to come on to relive my love, but of course as soon as they came on stage I remembered I wasn’t a teenager any more and it looked like everyone who’d just surged into me was. I gave up my prime position as it turned into mosh pit. \

Not for me. Not any more.

I watched the rest of the (awesome – how has Derek not aged?) show from the grassy mount. That was one of the coolest things about Rock en Seine – the way they’ve positioned the main stage means there’s a huge hill on the side – prime spot for just sitting and admiring the show.

And then Foals playing Spanish Sahara was another definite highlight. Gawd, that song is amazing. If you can’t stand the wobbly camera on the clip above I’d recommend you check the tune out on Spotify. Love it.

Oh, and one last one. We were right at the front for Bastille and then the lead singer, Dan Smith, came out into the crowd and everyone went nuts. He was singing Pompeii, the sun was out, we’d had a few beers and life was good. The line up looks awesome this year – bloody love The XX, and The Kills. In fact, the headliners this year look even better than when I went.

Despite being called ‘Rock’ en Seine, it’s not all rock music. As you can see from the line up poster there’s a good mix of electropop and indie. Not just for the rockers! 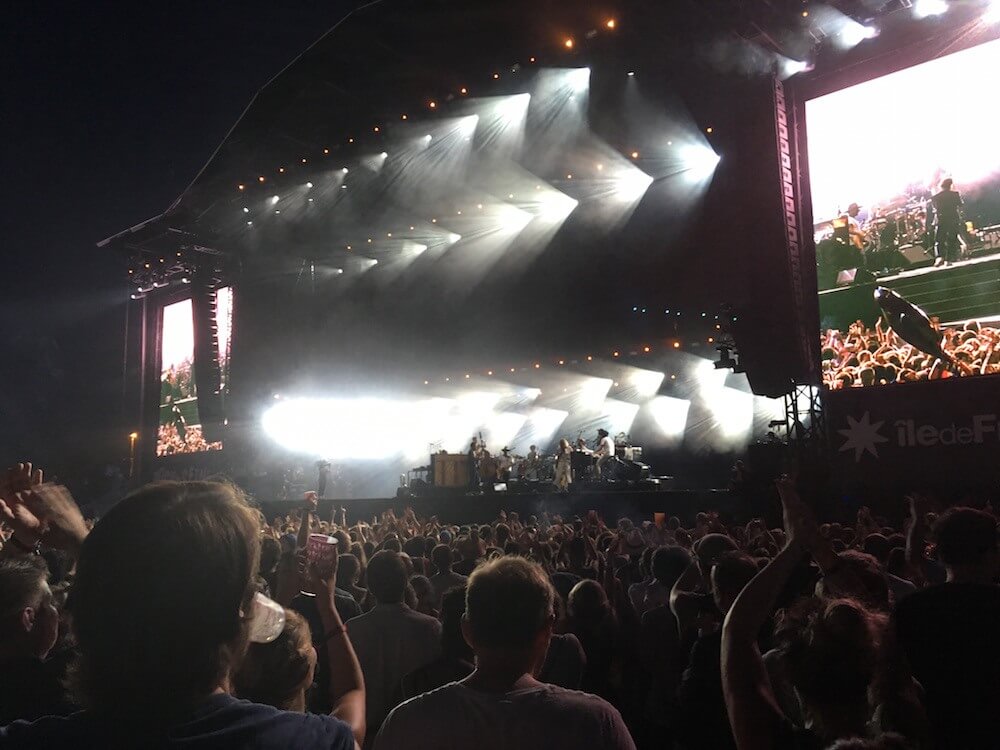 There were lots of fast food options at the actual festival, but the good thing about Rock en Seine in the centre of Paris was that you could eat in the city before you go.

The festival started to get busy at around 5ish so we made sure to have a good lunch somewhere in Paris before we went. I did have some Pad Thai one night from one of the stalls but to be honest, I wouldn’t recommend it.

We did make the most of the Pringles stand giving out free tubes though! 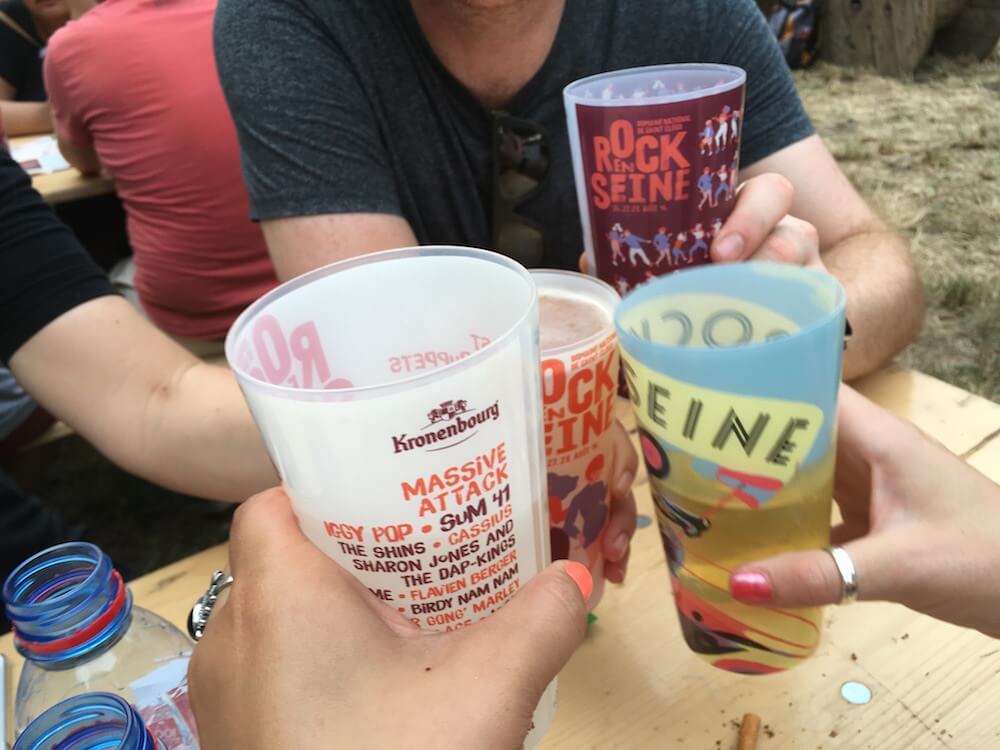 Kronenbourg beer was served as standard at Rock en Seine, although, in the picture above that’s a pint of wine. We realised it worked out pretty good value to just get a bottle between us.

I really liked Rock en Seine’s dedication to the environment – like Latitude Festival they’ve decided not to give out ‘disposable’ plastic cups but instead give you branded Rock en Seine cups to use again, which they will wash and you can have a fresh one each time.

You’re not allowed to bring your own alcohol in to Rock en Seine Festival and you’ll be searched at the entrance.

Other things to do 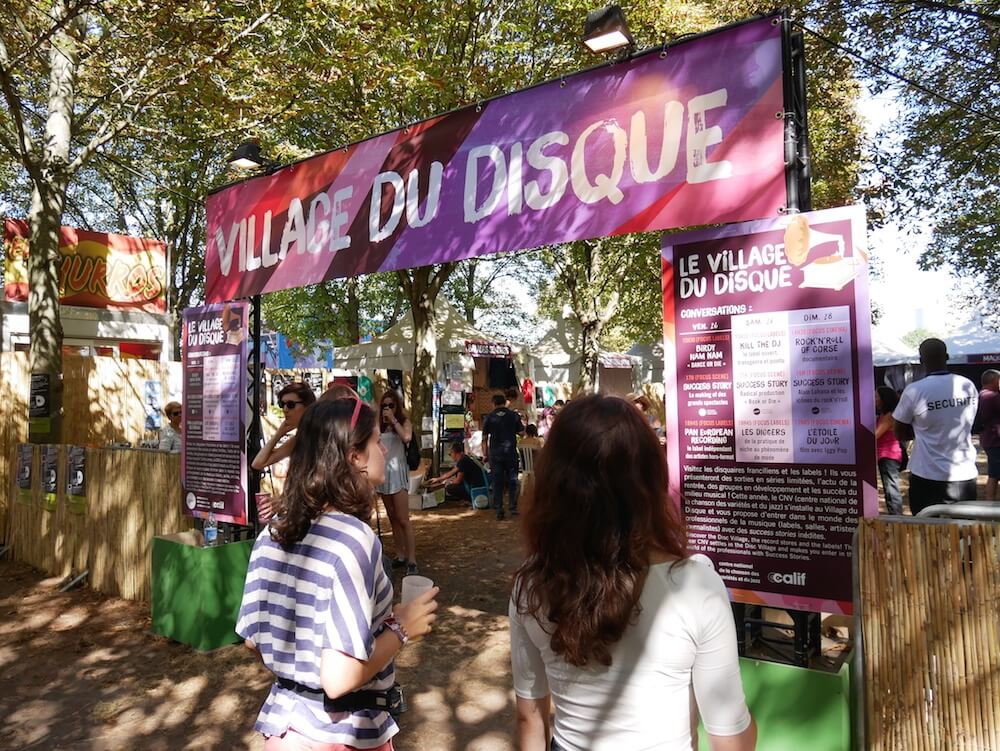 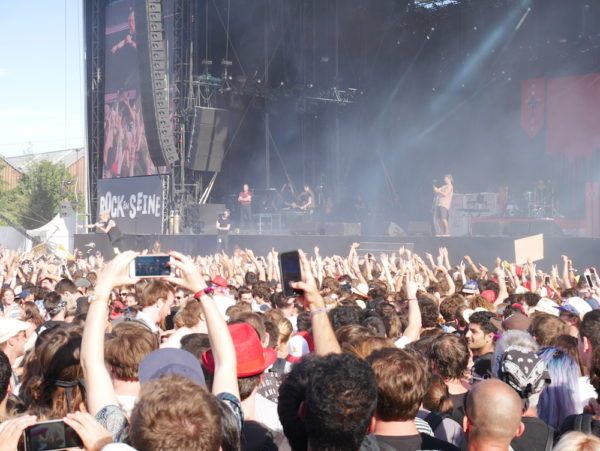 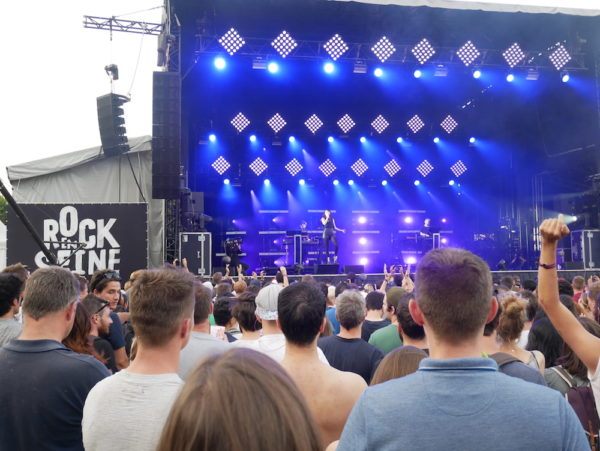 There was a little record shop on site at Rock en Seine, where you could buy the performing artists’ work. You could order the vinyl and then pick it up later. There was also a really cool gallery set up with graphic design poster work featuring the artists, which for some reason I decided to try and imitate. Who knows what was going through my head?! 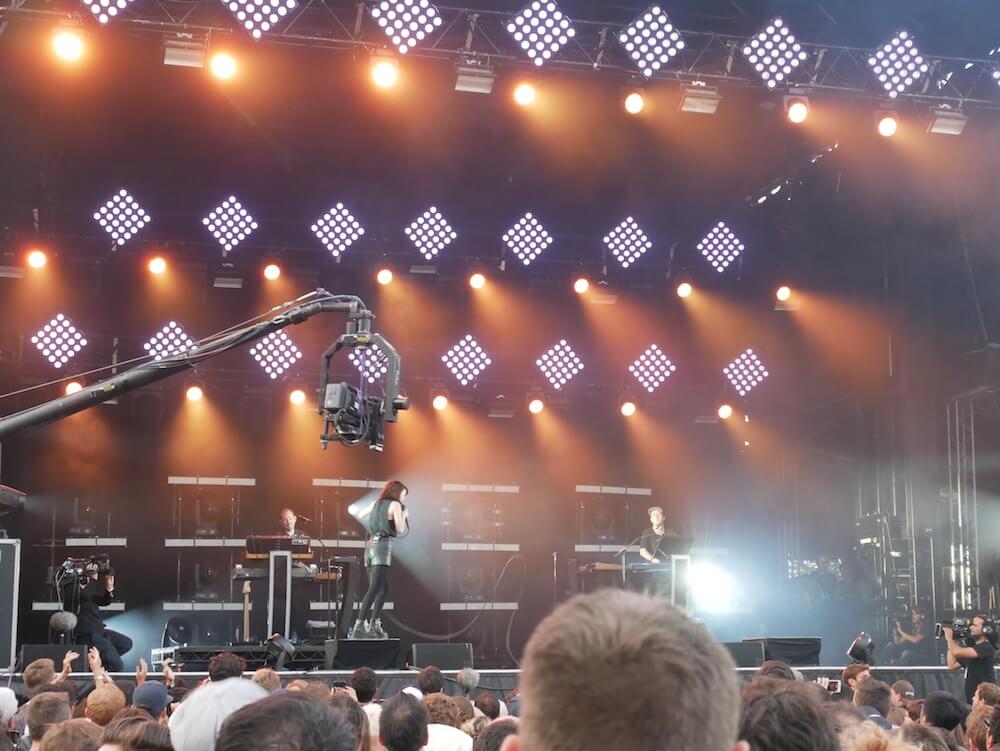 Rock en Seine operates on a wristband basis. At first I thought this was annoying but I soon realised how good it actually was. Having the wristband means you don’t have to carry any money with you or worry about ATMs – and the queues at the bars are so much quicker.

You simply register your unique ticket number on the Rock en Seine app and then link it to your PayPal account and then you’ll get a wristband you can just flash at the time of payment. Kind of felt like I was getting it for free. Loved it.

It can be problematic when you go to buy drinks and realise you don’t have any money left on your wristband but the bar staff were very patient waiting for you to top up again.

And, unlike other festivals I’ve been to with some sort of card scheme like this, you can claim your money back that you don’t spend. 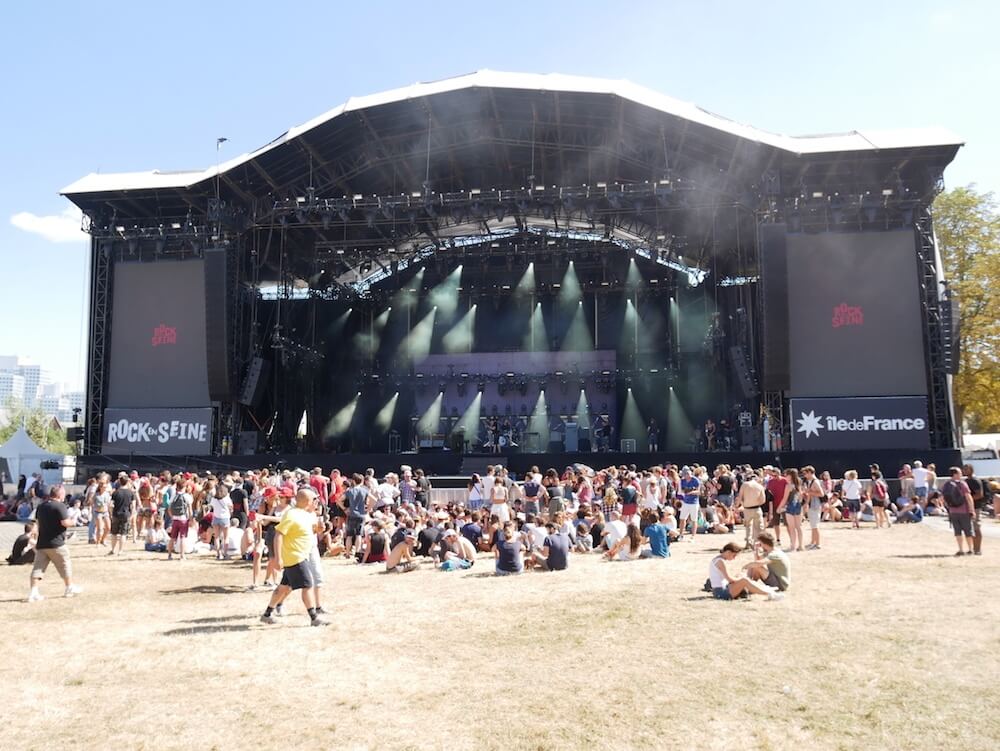 Well, obviously you need to get to Paris first. There are some pretty cheap (but lengthy) ways to do this via buses, and expensive by plane, or you can just go via Eurostar, which is what Brenna and I decided to do. It’s so easy from Central London, and you land right in the centre in less than two hours.

Rock en Seine Festival is well located on Paris’ Metro system. You just need to get off on line 10 at Boulogne Jean Jaure and then you can walk over in about 10 minutes.

Where to stay in Paris 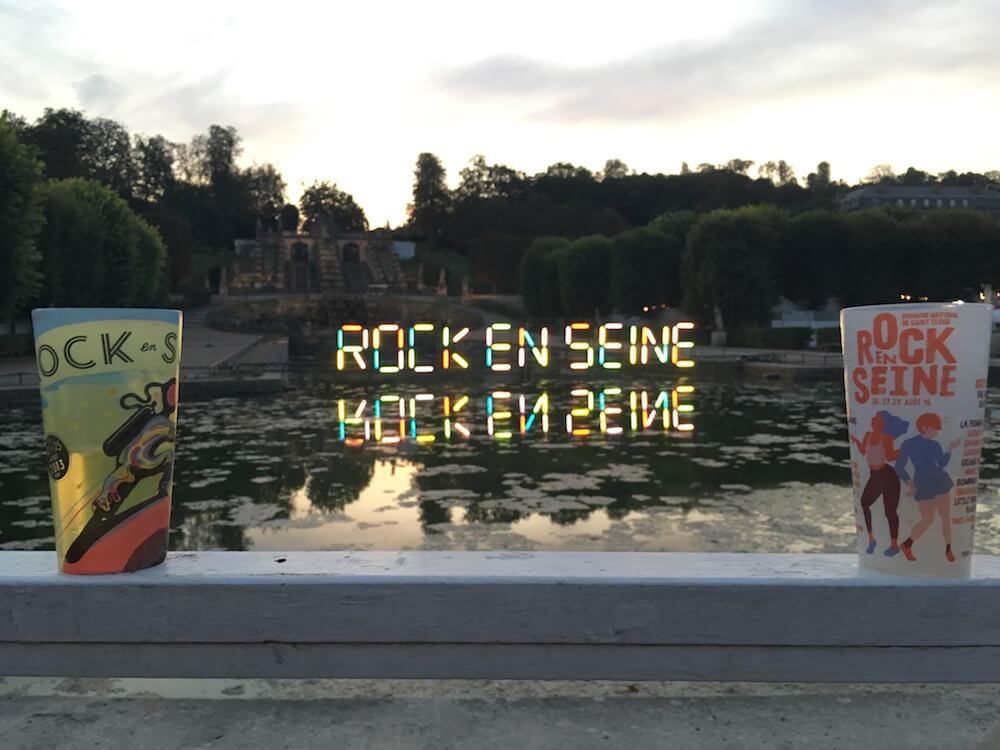 We stayed at Exelman’s Hotel, which was an easy 25-minute journey from the festival. It was a good hotel, for the money, the only issue was that there was no air conditioning and no fans and it was absolutely scorching. We mentioned it to the staff every day but they didn’t do anything about it.

Try to stay in the 15th and 16th arrondissements as it just makes it easier for getting home at night.

Rock en Seine was a cool festival in a great location, and the line up for 2017 looks awesome!

– I went to Rock en Seine as a VIP guest of the festival. All thoughts and opinions my own.

Rock en Seine Festival 2017: Win a Pair of VIP Tickets With Beyond Blighty

[…] For information on everything from food and drink to transport links and cashless payments, check out travel blogger Vicky’s experience at Rock en Seine 2016. […]