I went to my first festival in Canada this year – the Dawson City Music Festival. It was the 41st edition of the festival, held up in Dawson City, in the Yukon, Canada, making it the most northern festival I’ve ever been to.

The Dawson City Music Festival is an intimate celebration of Yukon, Canadian and international music, held in a beautiful city, with a friendly crowd. It takes place in July, and so the days were hot, the evenings fresh but warm, and the sun never set. When is the Dawson City Music Festival? July

“The Dawson City Music Festival will remain “Canada’s tiny, perfect Festival” by consistently and collaboratively delivering high-quality, diverse musical experiences. By doing so, the Dawson City Music Festival Association will be recognized as a significant contributor to both the quality of life and the cultural economy in Dawson and Yukon; and the DCMF will be understood as a celebration of Dawson’s spirit, hospitality, volunteerism, and community life.”

I’ve already written an extensive guide to Dawson City and what to do there.

Annnnd, made thisvideo on the best things to do in Dawson too, so I’ll keep this short.

Basically Dawson City, where, as the name gives away, the festival is held, is an arty kinda place. Colourful, interesting and a rich and fascinating history, it was at the centre of the Gold Rush of the turn of the century. Thousands and thousands of prospectors travelled here seeking their fortune, but it was only the first ones, or the lucky ones, who really made any money. You were actually better off providing services to the men who travelled up, rather than looking for gold yourself. That all ended as soon as it began, and while the population of Dawson City peaked at around 40,000, it’s now only a few thousand who brave the winter. It is COLD (think -40C). But July, is toasty.

Nowadays it’s the arty and adventurous who come to Dawson City – to enjoy the hiking, the art programmes and to experience life this far north.

And, of course, to attend the annual Dawson City Music Festival.

One of the highlights of the Dawson City Music Festival, was the music crawl on the Sunday. We were to go to five unannounced locations, on a crawl around the city and at each one, would be a different band.

In between, all the attendees would travel together to the next one, and we’d only find out where and who, once we were there.

Such a fun idea for a festival! I joined (slightly late) towards the end of the first set up at the Robert Service House. Robert Service was / is a famous Yukon poet, from Scotland. His hut has been left as is, and you can do tours around it as part of a Canadian Parks tourism project.

I’d already done this the day before – definitely recommend.

As you can see in the pic below, they were watching the band in the shed bit. 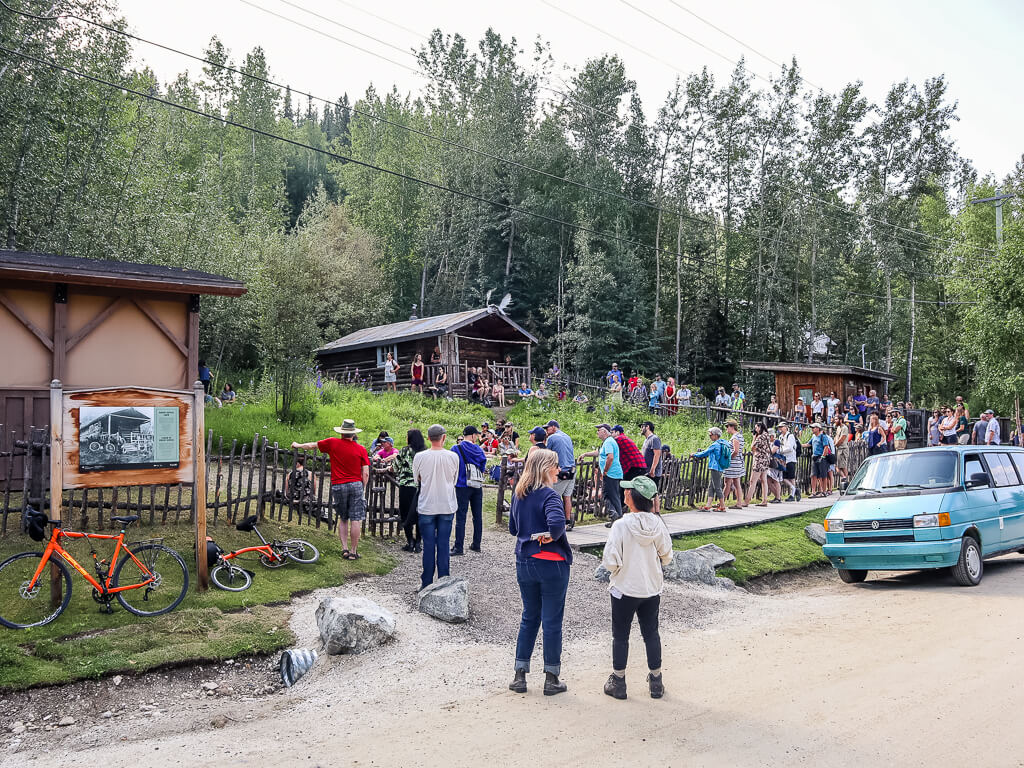 I’d just managed to catch the last song at the Robert Service House and so joined the crawl down to the Commissioner’s Residence on Front Street. During the boom years, of the Gold Rush, this is where the Commissioner lived.

We sat / danced out the front while Orkestra Kriminal entertained us with their Yiddish gangster repertoire. Songs about the criminal underground of the 1930s got a few early keenos up and dancing. Next up was my favourite – The Lucky Ones at the Old Post Office. We walked over there, to a building that again had been built at the height of the Gold Rush, with all the opulence you’d expect.

Unfortunately they’d built it so big, and so fancy, that in the winter it was far too expensive to run and so now it’s only opened for tours. It was a real privilege to be in there to watch these guys – they were fantastic.

They describe their sound as ‘real time country music’. Look at that location!

The Dawson City Music Crawl finished with AquaKulture playing on the SS Keno. The SS Keno is one of the paddle boats they used back in the day to get supplies, and people, to Dawson City.

It’s now a stationary boat, docked on Front Street and used for tours. The perfect location for the music crawl to end, especially seeing as it was close to the Klondike creamery – one of the best ice cream shops I’ve ever been to.

The Dawson City Music Crawl is such a great idea for a city festival like this. It gave awesome access to some of the coolest spots in the city that I wouldn’t have seen otherwise. The First Nations Dänojà Zho Cultural Centre has a free programme for the festival. The centre is a permanent building, offering visitors the opportunity to discover the history and culture of the first people of the Klondike.

During the DCMF they have this stage outside for First Nations performers to do their thing. This is free for everyone to attend. The actual festival mainly takes place in the big tent in Minto Park. There’s a day time programme, and an evening one, and outside of that there are food stalls, a beer tent and another smaller stage for emerging artists nearby. – The Jerry Cans were the big headliners of the weekend – Quantum Tangle introduced me to the concept of throat singing, fascinating!

Afrikana Soul Sister, The Lucky Ones and Quantum Tangle were great. I really enjoyed the fact I didn’t know any of the bands before I went. I’d been at Glastonbury Festival a few weeks before and it was like the Dawson City Music Festival was the absolute antithesis. I found some new bands to add to my ever growing list of favourites. The festival sold locally produced beers, and a range of food too. There was also a clothing area, and a safety tent too. 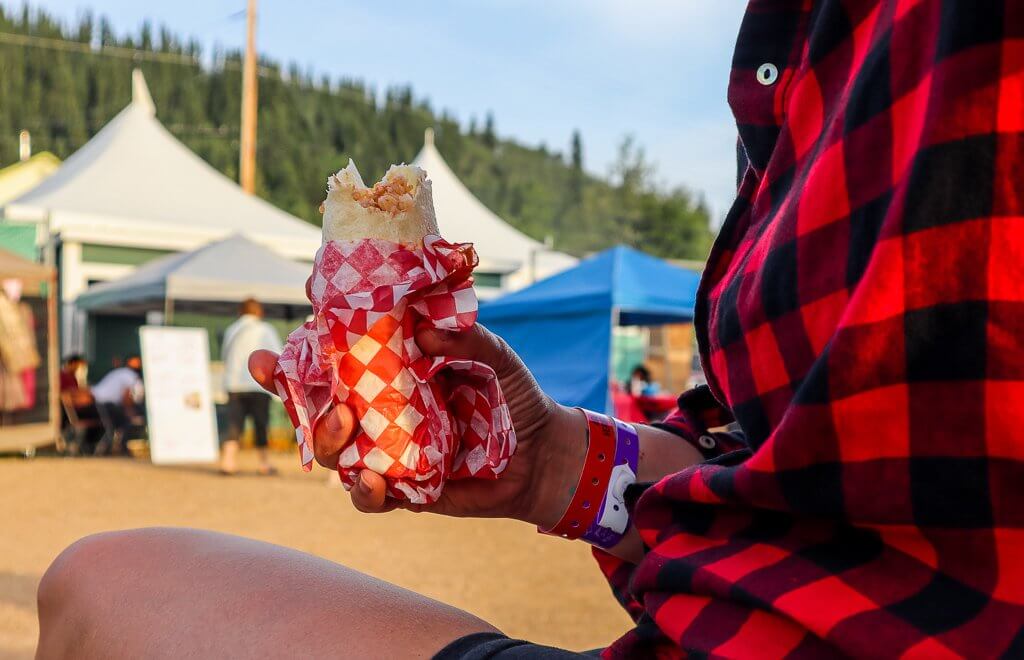 – Me and my Indian butter chicken wrap, another taste sensation in Dawson.

As well as the main tent, the bands performed at the impressive Grand Palace Theatre. The whole building was made out of old paddle steamer boats, which impressed me! (see the top pic for the outside!) Where to eat at Dawson City Music Festival

There were a few food stalls at the festival – one selling hot dogs, another with poutine, another with Indian and one with Vietnamese. I tried the banh mi at the Vietnamese, and a butter chicken wrap at the Indian. Both very good.

Given that the festival is so close to the bright lights of the city it was easy to just eat there instead. If you take a look at my guide to Dawson City you’ll see a few foodie recommendations in there. There are some great restaurants in the city.

My favourite for breakfast in Dawson City was Alchemy, which was a kinda healthy vegan kinda place. The best place for lunch was the Drunk Goat Tavern – try the prawns and rice feast. And then for dinner I’d recommend Aurora. If it’s just coffee you want, then the Red Mammoth Bistro was definitely the best option.

They’re absolutely fine with you bringing your coffee into the festival arena, although, no alcohol, of course. – I wish I’d noted the name of these ladies on the upcoming stage – anyone? The Midnight Sun is a disturbing thing for a music festival. It never feels like it’s time for bed, because in July, when the Dawson City Music Festival is on, the sun NEVER sets.

This pic was taken at midnight. Weird hey?!

Lucky for me the festival finishes around then. Although, as I soon found out, it doesn’t mean the party is over. Once the festival is done, head to the bars – and you won’t need to go home until morning (so I’m told). 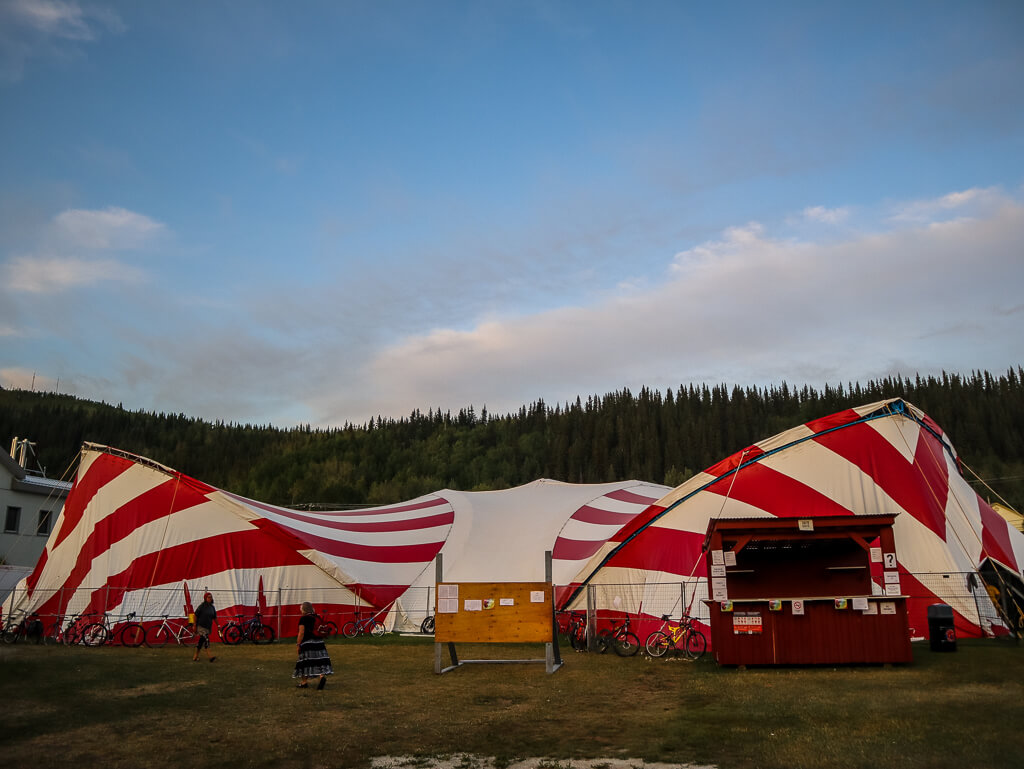 Where to stay for Dawson City Music Festival

There is camping at Dawson City Music Festival. It’s just outside of the main festival area and is free with your ticket.

I didn’t camp, but stayed at the El Dorado Hotel on 3rd Street instead. I had a large apartment – with kitchen, lounge, bedroom and bathroom – to myself. The restaurant here was good – I went once for breakfast. And the bar was nice and friendly too.

The El Dorado Hotel was in a fantastic place for the Dawson City Music Festival. It was only a few minutes’ walk home every night, and it was right in the heart of Dawson City too. 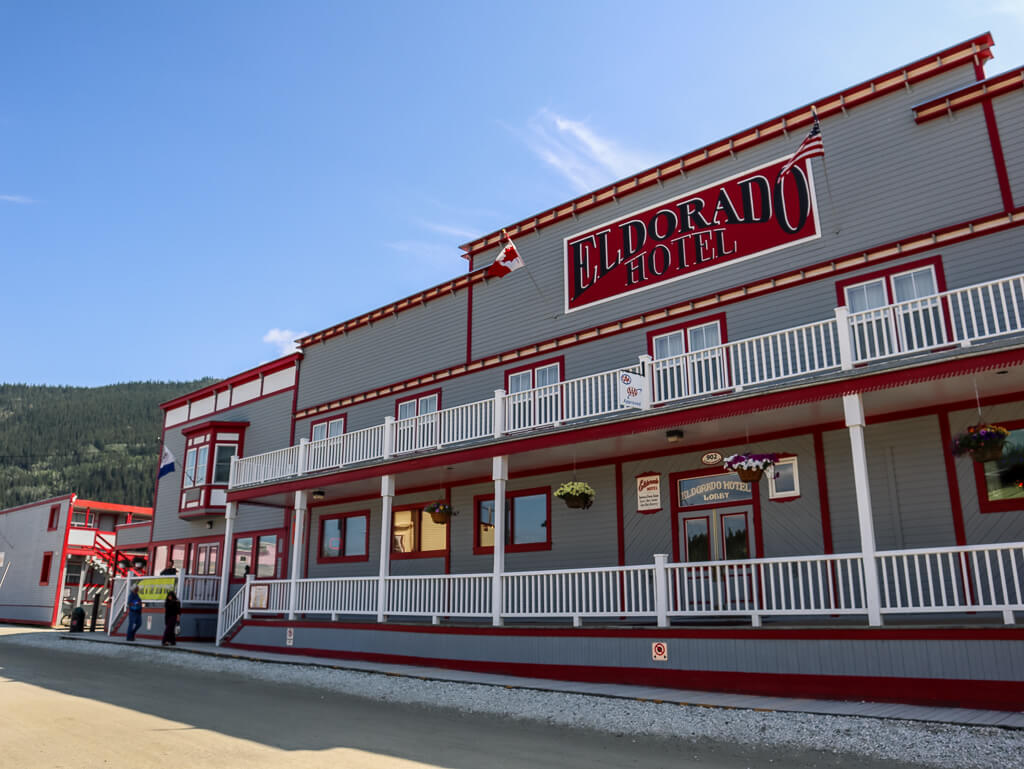 The Dawson City Music Festival is a unique and wonderful experience, in an unbeatable location. I loved my week in Dawson City, and if you’re ever up in the area, then the DCMF will provide a fascinating insight into the music of the Yukon, and the unique culture around.

I went to the Dawson City Music Festival thanks to Destination Canada and Travel Yukon.

They organised and planned my trip in return for my thoughts on my blog. In short: it was brilliant! More on travel in Dawson City and the Yukon

My 6-hour canoe ride down the Yukon River

Travel Guide to Dawson City in the Yukon