Six hours. A six-hour voyage down the Yukon River in a canoe. Apparently that’s what I’d signed up for.

The one and only time I’d ever been canoeing (over kayaking – very different) happened to also be in Canada. It was about 10 minutes out to the centre of Lake Louise in Alberta, and back again.

But now, a six hour canoe trip down the Yukon River.

I was partnered with another solo traveller – Maureen. She was a teacher from Vancouver who apparently knew what she was doing and took up position in the back as chief steerer. She seemed thrilled to take control.

Drawing on my limited kayaking adventures only quashed my confidence. My memories of kayaking include my ex boyfriend and I having a massive barney in Halong Bay, in Vietnam, as we tried to get round the limestone cliffs. Him going left, me going right, we going in a circle, before we gave up. And me and my travel blogger friend Paul trying to get in a rhythm in Costa Rica. We caused the whole kayak trip to change course as they didn’t think we’d manage to traverse the one they’d originally planned. Bit embarrassing.

And so, the common denominator in these stories was me. Yes, I have difficulty with rights and lefts, and I learn by doing rather than being told. Not good in the current conditions. 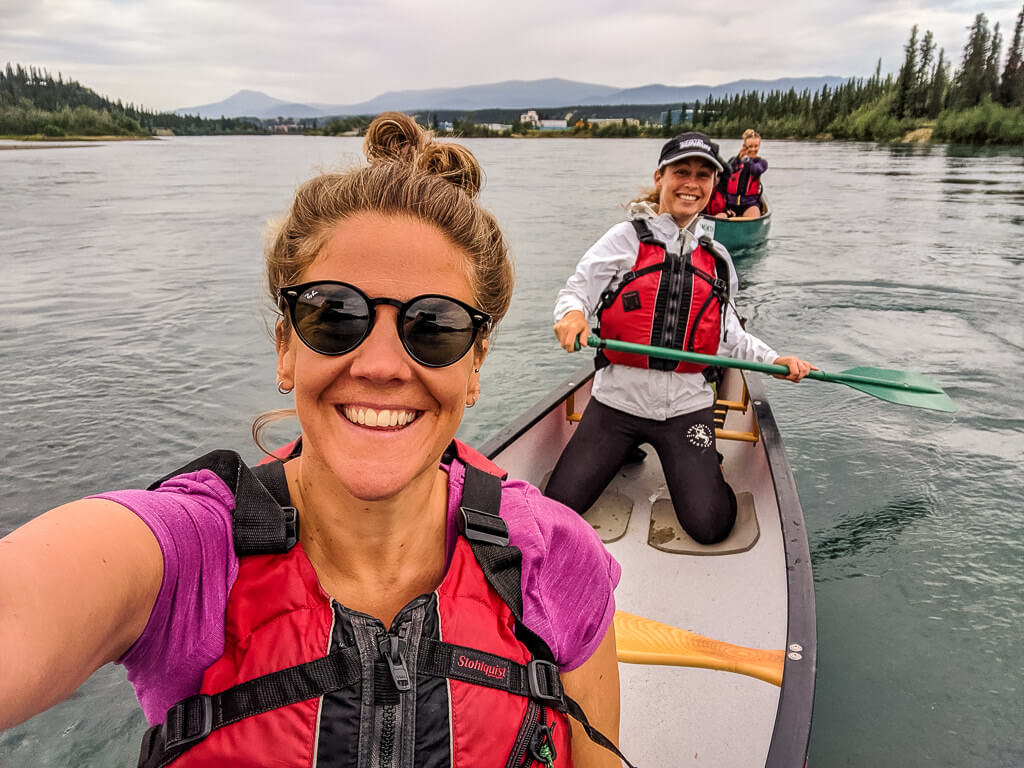 I apologised to Maureen for what might be about to happen. She was smiling and complimentary (for now anyways).

“Sure, you’ll be fiiiine!” with that typically friendly Canadian reassurance (and misplaced positivity).

We took to the water.

READ THIS: Unique Places to Stay in Whitehorse

Canoeing down the Yukon River

‘Oo we must’ve been going for hours,’ I thought, before reaching for my phone from my dry bag and realising we were actually only 30 minutes in.

This is NOT just a selfie of me canoeing down the Yukon River. Look in the background, look harrrd. That’s a bald eagle perched on that branch.

The silent calm was broken by a bald eagle swooping in a few feet over my head. And then I spotted another perched on a branch as we floated on underneath. He posed long enough to take this selfie, look for him in the background.

Even a moderate animal lover like me gets butterflies when I’m that close to a creature so majestic.

As well as steering the boat wonderfully, Maureen was knowledgeable enough about the Yukon river banks that in between the silence I was getting a guided tour too. I soaked up her facts about the Canadian wildlife, and the Yukon, but it was when she was finally shushed into silence that the canoeing really felt magical.

The tranquility of the wilderness was nourishing to the soul. 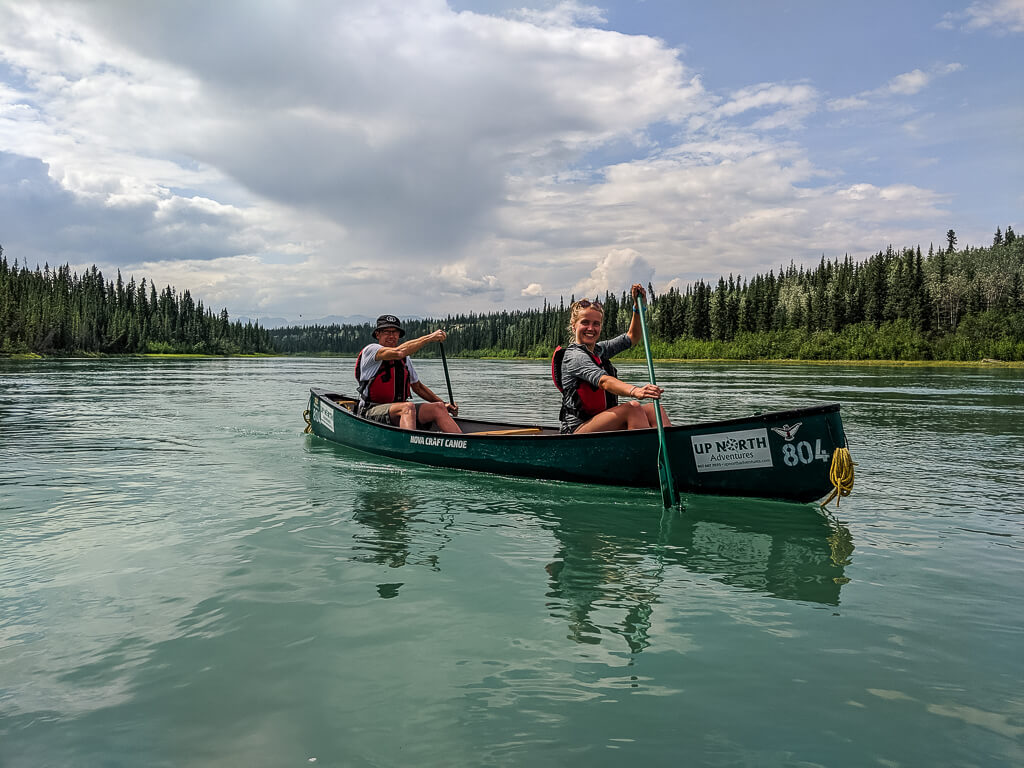 The rest of our group – a 3-person Kiwi family, mum, dad and daughter who’d moved to Canada – and our tour leader were up in front. They were watching the ravens overhead and laughing at their loud croaking, just like frogs back and forth.

I wondered if it was at our arrival, disrupting the waterways, or whether they’d even noticed us down below.

Just when I felt like my shoulder couldn’t take even one more paddle rotation, our leader Daphne directed is to the river’s edge. We beached our canoes and I emerged from the canoe, unravelling my legs and creaking back to a standing position on the shore.

It was time for a coffee break – with biscuits and freshly baked lemon bread.

Well earned and well deserved. I ate slowly, attempting to drag out the land time for fear of getting back in the canoe. Thankfully Daphne gave us a good amount of time to recover. And with the slight sugar rush of second helpings – oo a biscuit too – I was ready to tackle the next million km, or three.

We revved our engines, and by that I mean paddled our canoes, and sculled on as the limestone basin loomed over us. 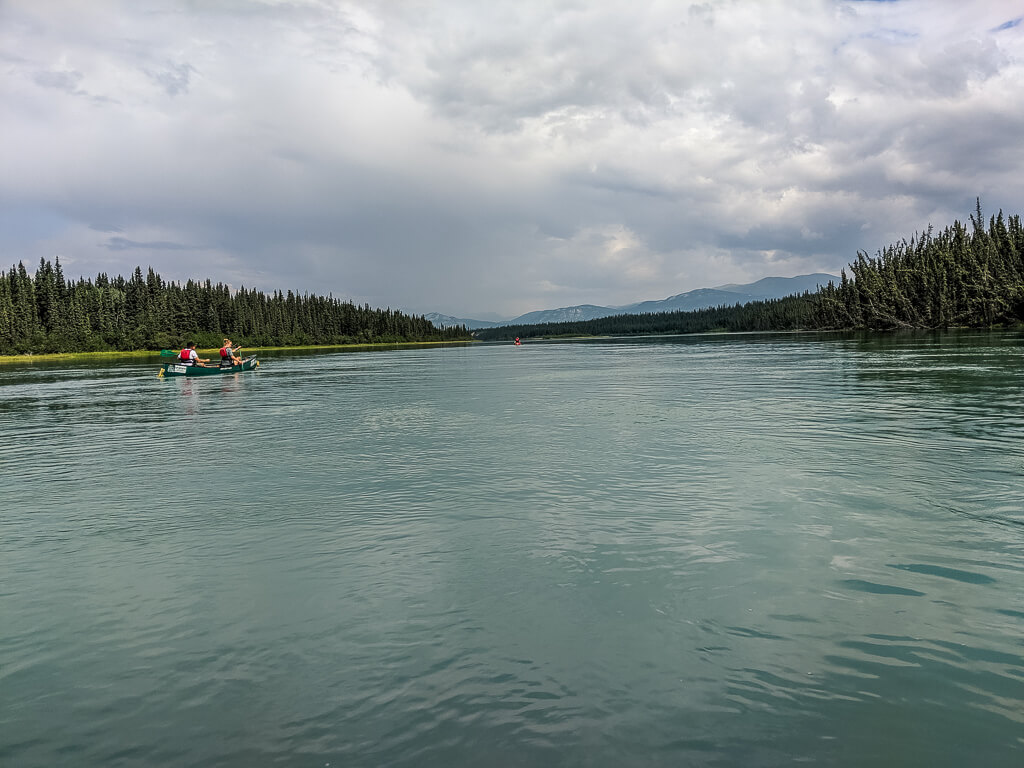 The overcast sky gave way to blue and the rest of the group started to peel off their rain jackets and jumpers thanks to the sun hitting the exertion. Me, being totally unprepared for the trip anyway, was already just in a t-shirt from the start. The sun felt good on my goose bumps from the splashes of river water.

“One more stroke. Keep my hand to the base of the paddle, just before the plastic spreads. The most powerful position is to almost get my fingers wet. Keep the other hand strong on top. Keep it close to the boat. Pull, and over. Pull, and over.

Another hour passed in stunning vistas and intent paddling. My pauses became more frequent as I stretched my back and rolled my shoulder. I knew this was going to hurt tomorrow. Maureen reassured me ‘I was doing great’ – offering words of encouragement to quash my desire to give up and just sit out on the river in the canoe, soaking up the surroundings.

Finally, we spotted our lunch island centre stage. The huge pines were now flanking us on either side, the blue of the Yukon river was highlighted by the cloudy skies, although its ever changing hues rippled with every paddle stroke.

I’d expected a sandwich. Maybe a bag of crisps. Instead, Daphne set to work on the fire pit and we helped to gather firewood. The 5 of us dispersed to bring back the fuel to BBQ our dinner. We worked together to get stones and sticks to balance the grate on, ready for the sausages Daphne rummaged from the cool box. 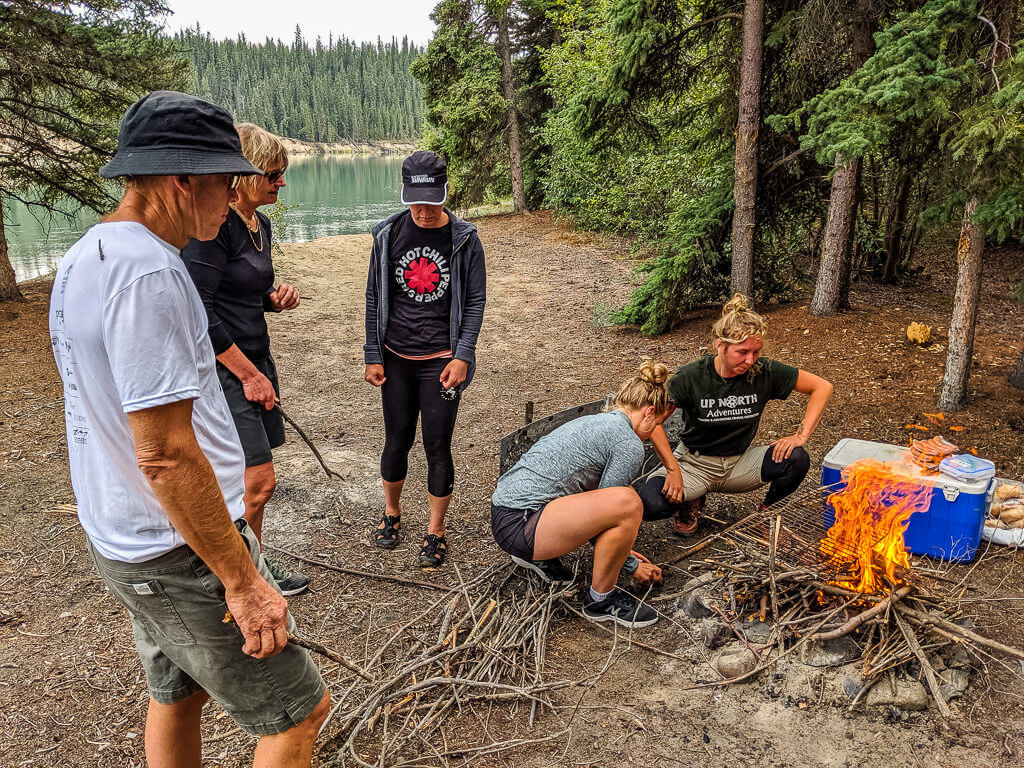 Lunch was a double hot dog, rustled up on an open fire by a Quebecker, a Vancouverite, a Brit and 3 kiwis on the banks of the River Yukon, after 4 hours paddling a canoe.

It was the Canadian dream I never knew I had.

Especially when Daphne added some thermos warmed veggie chilli to the mix.

I needed the break.

Oo yer can’t beat a nice big fat sausage when you’ve just canoed for 4 hours and 20km up the Yukon River, can you? * ?? * Yesterday’s trip was all the Canadian dreams I never knew I had. Paddling down the river we saw bald eagles soar above us, listened to the ravens croaking in the trees and enjoyed the occasional silence in nature. We eagerly looked out for moose and bears, but didn’t manage to spot one. * ? * After four hours, with a tea and cookie break in there, my shoulders were KILLING. Only ever canoed about ten minutes before. Thankfully we pulled over to an island, our tour leader cracked out the sausages and we went foraging for stones and firewood to build this BBQ. And then we sat, with double hot dogs and re energised in the wilderness ready for the last hour of paddling to the pick up point. * ? * [AD] Thankyou @upnorthadventures for this incredible experience. #exploreyukon #wildwernessbbq @exploreyukon #whitehorse #yukonriver #canoeing #adventurequeens #adventurequeen @explorecanada #yukonlife #travelyukon #yukonriverquest

And thankfully it was just another hour to dry land for good. Although, I didn’t know that then. I didn’t care. As much as I’d worried about being able to do it, and making it to the end, it’d been absolutely incredible. I could totally see why it was known as the Bucket List trip at Up North Adventures.

Of course, I was grateful when I saw Daphne pull in to the side and announce the tour was over. But I was also amazed, proud and surprisingly sad it was over. We’d had a great group and a wonderful time.

It only took us half an hour to drive back to the office just off Front Street, and it was interesting to see our route from the road.

Of course, it didn’t compare to canoeing the Yukon River for yourself though.

Only you can do that!

How to book this trip 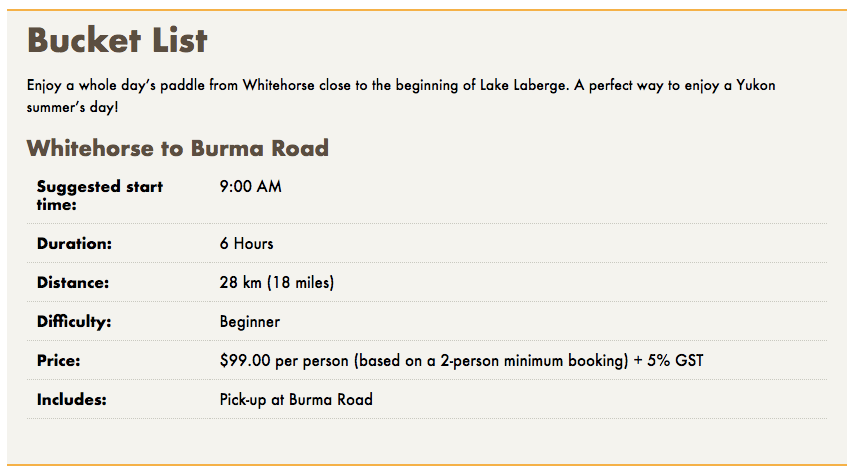 The Bucket List Adventure with Up North Adventures costs $99 CAD (£60) and you will need to book in advance. We met at 9, left at 9:30 after everyone was kitted out, finished at 4 and got back for about 4:30.

READ THIS: Unique Places to Stay in Whitehorse

I was in Whitehorse thanks to Destination Canada and Travel Yukon.

They organised and planned my trip in return for my thoughts on my blog. In short: it was brilliant!

More on the Yukon

Watch my video on Dawson City – it’s a great place to go after Whitehorse!

What to Do in Whitehorse, in the Yukon

What to Expect at the Dawson City Music Festival

It is a great website. The design looks very good. I will bookmark this page. I enjoyed the information. Regard Swan Tours