The Craziest Things I Saw in Hanoi 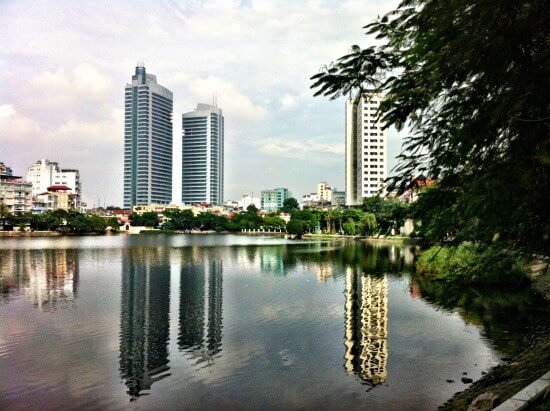 We were sat enjoying some bia hoi on the streets in the main backpacker area in the Old Quarter. Perched on two of the standard tiny stools we were watching five local kids play a game of keepy uppy with a little thing made of plastic and feathers. Some other, older, kids nearby and surrounding a motorbike caught my attention as they were laughing and preparing a a bong from what looked like a didgeridoo. I sat and watched.

Another tourist spotted them too and wandered over the road to have a go on it. The kids were more than happy to pass it over. They gestured for him to breathe in hard from the bottom of his lungs. Cocky and self assured he nodded and secured his pursed lips round the top of the pipe and did as they said, taking a good breath of it.

The kids gestured for him to keep it down. He did.

Then he started coughing and choking. His face scrunched up and his clenched fist beat his chest as if to try and punch out the smoke. The kids were pissing themselves laughing. I was smiling to myself too – what an idiot.

He started to back away, still choking, towards his outdoor plastic table just five steps away. Then his body suddenly went rigid and he collapsed to the floor, his limbs instantly stiffening up. He fell sideways, luckily. His three friends rushed to his aid and suddenly it wasn’t funny any more. My heart, and stomach, lurched. I realised I’d covered my mouth in shock and everyone on the street was staring at him. The local boys had stopped laughing.

He was probably out for just three seconds – lying on the floor down some grimey street in Hanoi – until he lifted his head up. His body was still frozen stiff though. Then he started to visibly shake all over like he was having some sort of fit, or an electric shock. He seemed very confused and looked around. Then it stopped.

His friends got him up, sat him down facing away from us and he put his heads in his hands. The local kids started laughing again and had a go themselves on the wooden tube. The whole thing probably lasted just two minutes but I’m sure it’s two minutes he won’t forget in a hurry. All the local kids were fine after their intake and joined in the game of keepy uppy, while he barely moved for an hour. That was some strong stuff!

Religion is an expensive business We paid our 10k dong and visited the Ngoc Son Temple in the centre of the lake in the Hoan Kiem District of Hanoi. It was cool. There was lots of elaborate and intricate detail and some interesting offerings for the gods scattered about. It was hot and sweaty though, so I found a perch next to the fan and just watched the action. I was transfixed by all the praying, shoe taking off and putting back on, waving of incense and just the general goings on of the place. Then, out of the corner of my eye I saw a laundry basket full of money. Then I spotted another one, and another one. The staff were emptying the donation bins that lined the altars. There was literally millions in there (of dong, thousands of pounds). I’d never seen so many bank notes in one place.

I went to tell my boyfriend and we walked back through to see them emptying even more from the bins into the baskets. I don’t want to incorrectly presume, but I can’t imagine they’d keep that kind of money in there overnight and it was only noon – did they collect all that in half a day? Amazing.

More on travel in Vietnam

Vietnam Advice to Know Before You Go

The ‘Dong Bao’ water puppet show in Hanoi is bonkers. Awesome, but bonkers. I kind of knew it would be though and that’s why it was a high priority as soon as we arrived.

We arrived for the 6pm showing at the Thang Long Water Puppet Show and somehow managed to get second row seats for our 100,000 dong (£3). We settled ourselves in to the red plush theatre to wait for the performance to start.

Three women sat downstage right playing instruments and narrating the story in Vietnamese while the English was subtitled on the screen behind. I actually really enjoyed listening to the Vietnamese pronunciations though, and the three women were pretty mesmerising: beautiful and made up to the max.

The award-winning story tells the history of how Vietnam came about according to folklore. Apparently, they all come from ‘one sack’ and really are all brothers and sisters. The water puppeteers acted out the story from behind a screen using tens of puppets controlled by sticks. I’m not going to spoil it, as you need to see it to understand the originality and uniqueness but I will tell you that it’s well worth the money, if only for the bewilderment.

*BOOK YOUR TRIPS BEFORE YOU GO TO SAVE TIME*

Casa Particulars: The Cheapest Accommodation in Cuba
← Previous
Thinking About Starting a Travel Blog? Go For It!
Next →
Click here to cancel reply.

If you come to Vietnam, I recommend you visit, you will have to exclaim surprise

One thing I miss in Vietnam is the beaches. They have beautiful islands with white sand beach.

The Best Things to Do in Vietnam According to Travel Bloggers - VickyFlipFlopTravels.com

people are nutty about their gods