An Israeli breakfast is an absolute must in Israel. I can say without a doubt this one at the Mendeli Hotel in Tel Aviv was a life highlight, never mind a trip highlight.

I ate as much as I possibly could but still, I didn’t manage to try everything. All the more reason to go back one day.

What is an Israeli breakfast? 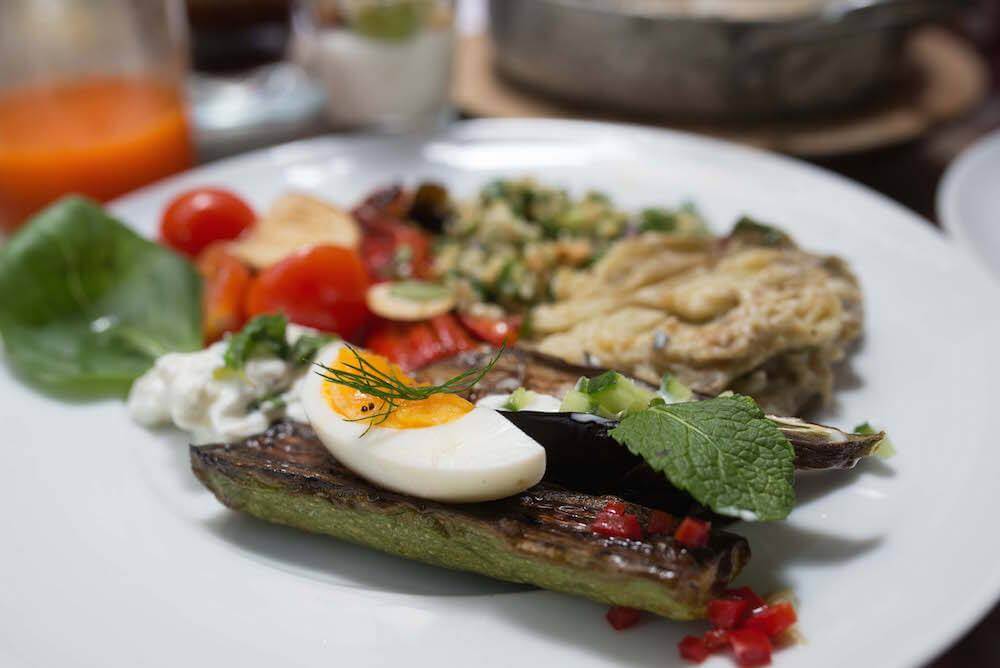 ‘Israeli Breakfast’ is a loose term for brunch. The feast is influenced by the cuisine of many countries in the Middle East and in some cases North Africa and the Mediterranean too. The smorgasbord of inspiration has united to create the Israeli breakfast that we, I count myself, know and love today.

Mixing meat in is forbidden under the Jewish Kosher rule and instead you’ll find hummus, babaganoush and the labaneh strained yogurt to fill the protein space. I definitely didn’t miss it.

Let me introduce you to Shakshuka As well as the buffet at the Mendeli you could order a hot eggy dish from the extensive menu. I went for the Shakshuka – peppers, tomatoes and coriander with two eggs cracked on top, left to boil in the veggies. So many of my favourite things in one pan, served in the pot to keep it hot while you eat. Shakshuka has definitely eclipsed huervos rancheros as my top-favourite-breakfast-if-I-had-to-choose. One of the things I liked best about the selection in the Israeli breakfast was the fact it was so healthy compared to our traditional English offering. Greasy sausages were replaced with beets and cumin, there was no bacon but roasted peppers and flamed cauliflower and instead of fried tomatoes we ate them lightly grilled.

There were fish options too, although the pickled herring was a bit much for me to even consider trying at that time in the morning. The salmon was succulent and full of flavour, and you can’t beat a smoked anchovy of a morning.

Then there was the yogurt course (made from a variety of milk producing animals), the cereals, the fruits and even a specially made breakfast panacotta to finish off.

Apart from all that bread

Despite all those healthy options the bouquet of bread in the air pulled me like a moth to a flame. There were pizzas, pastries, muffins and croissants to choose from, sadly I couldn’t try them all, even on my appetite. I went for the ‘taboon pastry’, just because it was something I’d never tried before, and looked damn delicious. It was warm, soft dough on the outside and then filled with aubergine in the middle – and like a stone baked cloud to sink my teeth into.

A plate of veggies for breakfast, with a side of freshly baked bread – what better and healthier way to start a day? I was a breakfast guest at the Mendeli on my VIBE Israel tour, and I’d definitely go back next time I’m in Tel Aviv. You can go for breakfast from 75 shekels (£12ish) or get it included in your room rate from £120 per night. The hotel is only 2 minutes from the beach, and it’s beaut!

Also, some of the photos above are by Or Kaplan, and some by me.