10 Photos From an Incredible Day in Jerusalem

We started at Abraham Hostels – from my days of working at HostelBookers.com I already knew it was the coolest hostel in Israel, and seeing it first hand backed up the customer reviews. The place has 75 rooms, it’s huge. Every week they put on special activities for the customers to make it a cool and sociable place to hang out. We were going to end our day in Jerusalem with a Shabbat dinner that night.

I learnt so much on my day in Jerusalem: considering I have an A grade A Level in Religious Studies I’m devoutly stupid. I’m going to assume you’re as knowledgeable as me, in that you celebrate Christmas and Easter along with the shops in the UK, have heard of the Quran, but the last time you partook in a religious service was when you were in the nativity play, probably as a tree.

1. View from the Mount of Olives 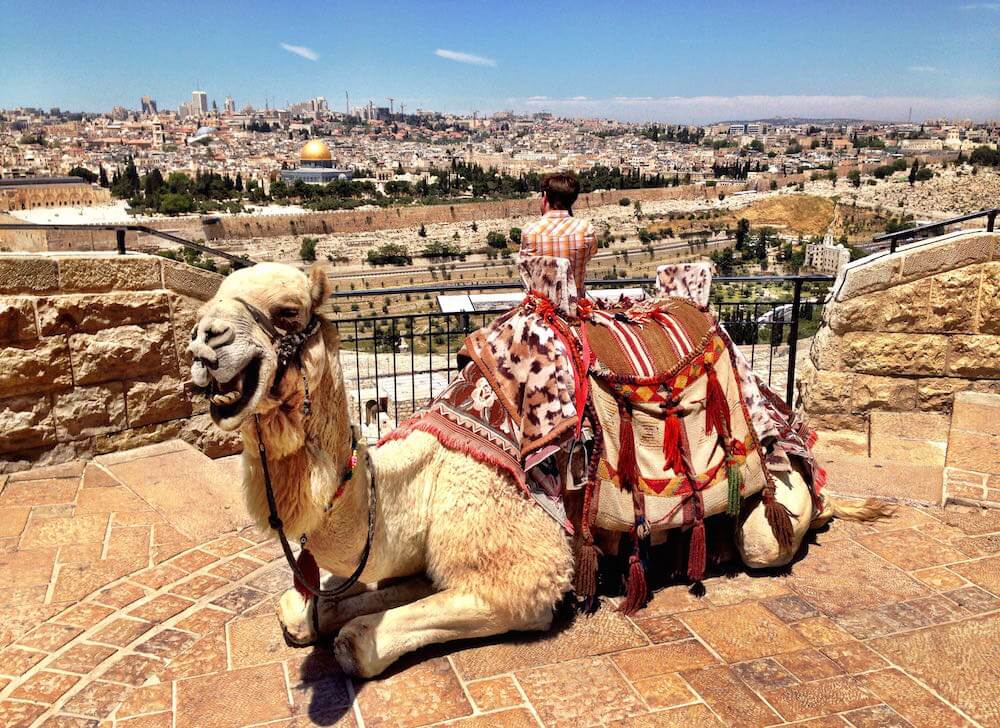 We took a bus and our Abraham Hostels guide Dvir, out to the Old City. On the way he pointed out the train tracks in the road that divided the Jewish side and the Islam side, even though the actual dividing wall was brought down a long time ago.

“I find it funny they have to sit together on the public transport in the middle.”

We stood on the Mount of Olives (not an actual mount of Olives, but a hill which was once covered in olive trees) and took in the view across the Old City. The Mount of Olives is known as the place where Jesus ascended to heaven, so now over 150,000 Jews are buried there. It’s prime burial estate. There was a lot to take in. Down the hill in front of us a group of Orthodox Jews dressed in their usual black coats, white shirts, black hats and ‘payot’ hair were walking in among them, obviously paying their respects.

The Chapel of the Ascension was built here, like many churches in Jerusalem it was built on the site to commemorate a particular biblical event. The Garden of Gethsemene was also visible in the distance.

From here you could see the segregation. It was fascinating – the three biggest religions in the world all lay claim to the holiness of the land. For Christians and Jews it’s where the most important parts of Jesus’s life were played out and Muslims believe it’s where the prophet Muhammad visited so they used to pray in that direction before Muhammad received the message to change it to Mecca. A pilgrimage to Jerusalem is still believed to be a necessary show of faith for all three religions.

“It’s amazing what a golden dome does to a panorama”

2. The Old City of Jerusalem 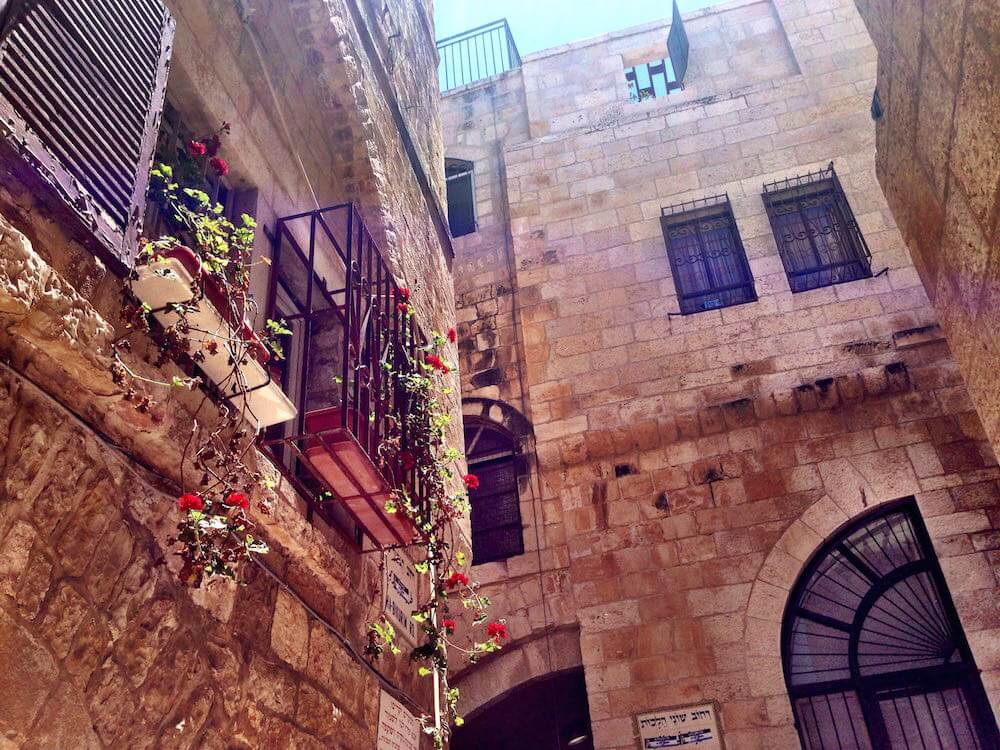 We drove down to the Old City and past the Garden of Gethsemane where Jesus was betrayed, captured and marched out to the cross. We went past the shopping mall, which was geniusly hidden in the old walls so you never need know that Nine West and The Body Shop were erected right near where Jesus was resurrected. Unless, like apparently a lot of tourists, you fancied a bit of retail therapy after ogling all the religious artefacts. The Mamila Wall is one of the biggest shopping centres in Israel.

Along the way we tried some of the traditional bagel bread. You break a bit off and dip in the little packet of salt that comes with it for a delicious and definitely not nutritious snack.

We walked past the Tower of David Museum. Dvir, our tour guide, told us that to add David to anything instantly validated it as a tourist attraction – restaurants, hotels, towers – anything.

We visited the nearby church – an oasis of calm against the tourist streets, just off the well trodden path. Go under a gate, or on a rooftop in Jerusalem and you’ll be transported from the midst of chaos to the peaceful surroundings of one of the holiest places in the world.

We learnt that many of the street signs we saw here were originally in Arabic. Then the Brits came along and added the English and then the Jews added their language too. Some of the signs you could see as a whole, others you could see where it’d been added to the top.

“The British were like a good referee in football – both sides hate their guts.”

3. Jerusalem’s religious crossways from the rooftop 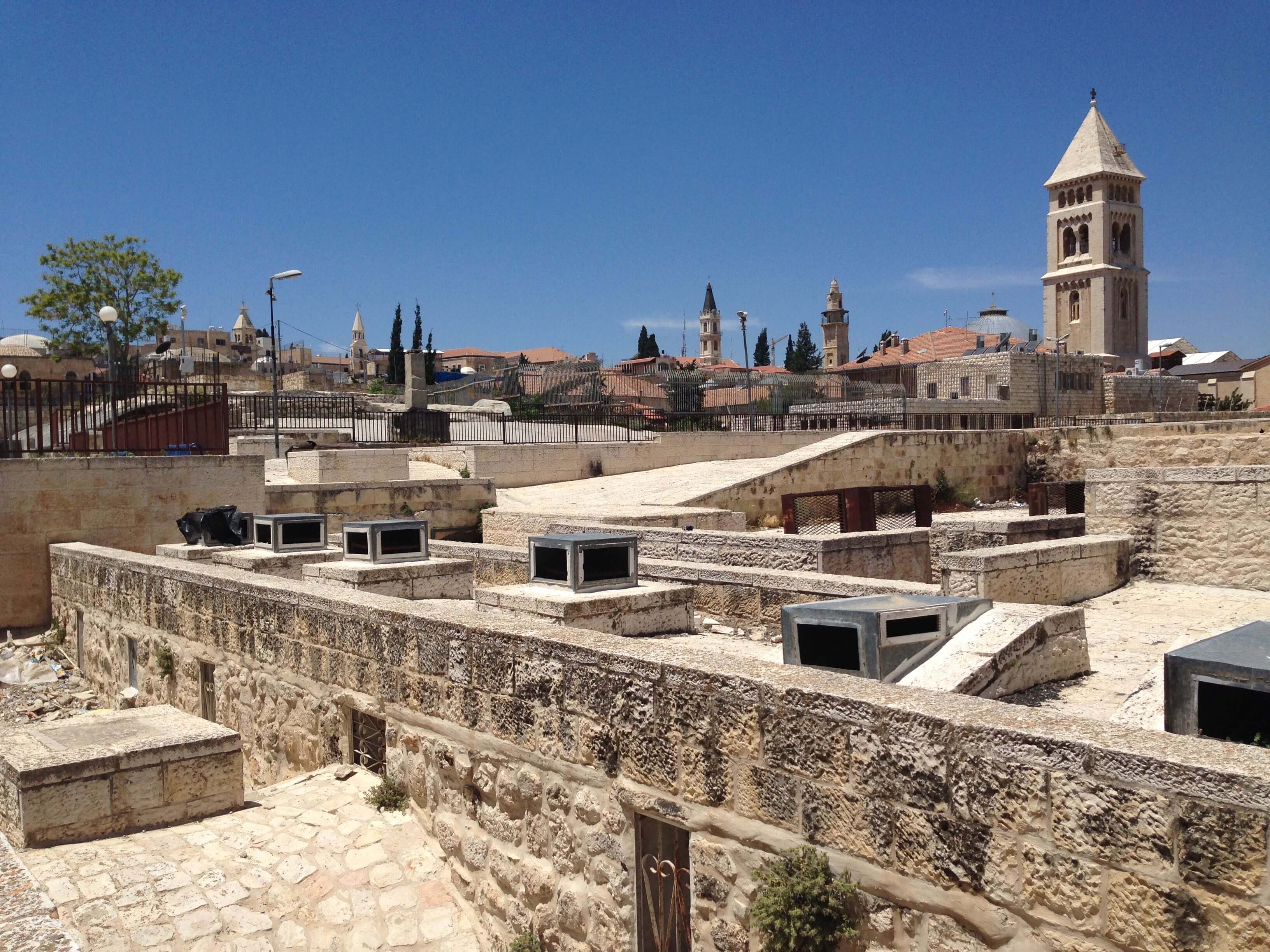 We stood on the roof of the Old City, able to look down at the market below and hear the chaos. It was a haven on the roof and you could see the divide between the four religions most present in Jerusalem – Armenian, Islam, Christianity and Judiasm. Look towards the four corners individually and you’d see each represented in the style of buildings.

“A person could use the rooftops to go from one end of Jerusalem to the other… Jerusalem is connected by its houses but divided by its inhabitants.”

The rooftops of Jerusalem are also the perfect place to practice parkour, as many younger Israelis do. 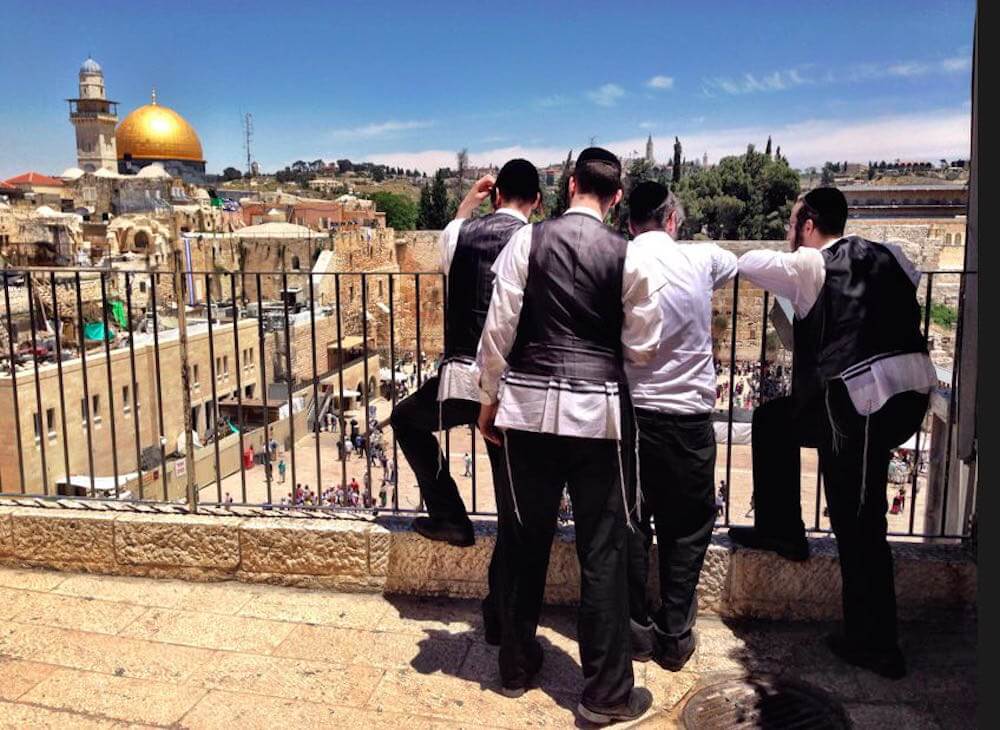 We carried on walking round the Old City until we reached the Wailing Wall. This side, that we could see from our aerial viewpoint, was where the Jewish people came to pray. They wrote prayers on bits of paper, folded them up and pushed them into the wall. I did the same. The wall was separated into men and women and all around me the women were reading from their prayer books, placing their hands on the wall and praying under their breath. When they walked away they would not turn their backs on the wall and instead kept looking at the wall as they walked backwards.

From the view off the Mount of Olives I knew that on the other side lay the Muslims doing exactly the same.

The wall is important in religion for many reasons, but one of the main ones is that Jerusalem was destroyed and rebuilt nine times. And through it all, just one symbol remained intact: the Western Wall / Wailing Wall.

– from a famous Israeli song

Our guide told us to pray for lunch, and we might finally get it. Oo he was a funny one. Whoever it was from our group who prayed for lunch got their prayers answered. Five minutes later and we were in a little restaurant sitting down to falafel, breads, hummus, salads and chips. More than the ten of us could possibly ever devour.

Don’t worry, I didn’t waste my one Wailing Wall prayer on that. 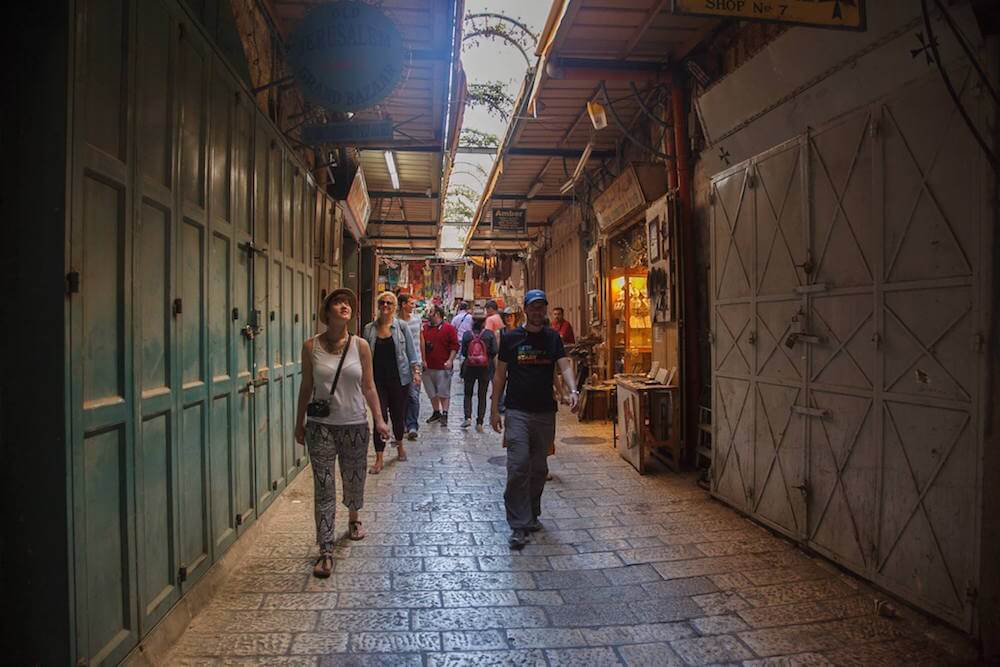 As we left the restaurant we got caught up in the Muslims leaving their Friday afternoon prayer – 50,000 of them – it was hectic. Interestingly if you’d been there at 4pm the same day you’d get caught up in the Christians Friday procession too, almost along the same route. We wandered up to the Vienna Hospice, away from the craziness. Not a hospice at all anymore but had an awesome roof garden overlooking the city. There’s also a lovely café there that none of us were hungry or thirsty enough to drink in, but I would. Next time. It was great to be reminded of the panorama over the city again, to see how the religions connect at different points. From here we could see the Jaffa Gate, the Damascus Gate and the Church of the Holy Sepulchre too.

Afterwards we stopped by a ‘photographic dealers’. The guy who runs it had found his dad’s old films, developed them and found hundreds of incredible photos of Jerusalem in years gone by. He’s also a photographer and there was a lovely photo of him, his dad and his son – three generations of photographers – after our day spent wandering it was incredible to see how things used to be. And in a way, how little had changed.

8. The Church of the Holy Sepulchre Following the labyrinth of marble stone streets and our Abraham Hostels guide, I nearly slipped over a few times. The millions of of pilgrims who’ve visited over the years have worn down the stone ground.

We arrived at the Church of the Holy Sepulchre: the most important church in the world for Christians and Jews. Four wings for four different religions. This is where it’s believed Jesus was crucified. I stood at the exact spot upstairs and watched the endless queue bow down to kiss the spot. I can’t imagine how amazing it was for some of those people to finally get here. I stood and watched them for a good five minutes. Religion equally fascinates and disturbs me.

Downstairs we saw the painting depicting the last three key points of his existence – crucifixion, death, a cave – right by where people were kneeling on the ground kissing the Rock of the Anointment. Turn the corner and the cave space where he was suspected to have resurrected from had become a grotto where more queues of people were desperate to walk through. I saw some guys with a selfie stick taking smiling pics in the queue when they were next to go in, as if it was Santa’s grotto, not Jesus’.

‘The Immovable Ladder’ outside represents the agreement to leave everything as it is, as decided by the six Christian religions present in the church. It was there when the agreement was signed and so became a symbol of the agreement. After getting some ice cream at the entrance we wandered through the Machane Yehuda Market. My favourite part was coming across this stall where everyone was dancing to some bassy music and people were just having crazy fun. It seemed a world away from the Old City we’d just come from.

Apparently the time we were there – 5pm on a Friday – is the best time of the week around Israel. Everyone’s been out of work for the day, as the week here starts on a Sunday, and they’re all getting ready for the sundown Shabbat dinner. So this is the little window where people just want to have fun, whatever that means to them.

There was so much enticing food here, and if you’re after a bargain it’s a great idea to go at this time too. The market isn’t open again until Sunday so they want to sell off all their stock. Exhausted and in need of a local beer we arrived back at the Abraham Hostel to prepare for our communal Shabbat dinner. I went up to the roof garden and watched the sun set on the city while enjoying a beer with new friends.

The Shabbat dinner was for 72 people. Imagine cooking for that many?! We all sat round the table – I was next to two Jewish women from NYC, with the awesome accents and everything – I basically just listened in on their conversation until it became too obvious.

A volunteer led the Jewish ceremony and broke the bread to signify the start of the feast. We cheersed the usual Hebrew greeting ‘L’chaim’ with the red wine they gave us, an important part of the Jewish ceremony, before getting stuck into all the dishes on offer. The dinner was absolutely incredible and the perfect end to an amazing day in Jerusalem.

From my photos is Jerusalem what you thought?

How to Do the Rajdhani Express Train Overnight
← Previous
The Phenomenal Israeli Breakfast from the Mendeli Street Hotel
Next →
Click here to cancel reply.

I love your photos. Seems like you had an awesome day!

Thanks Stef – it was definitely enlightening! I'm not entirely sure what I thought Jerusalem would be like but not like it was. I'd definitely go back.

Your photos are great - I love the camel picture! I've never thought of going to Jerusalem but it looks really interesting :)

Thanks Becky – I'd definitely recommend it. Jerusalem is obviously full of history but it's also a really beautiful place too. I'll be back one day!