For ten days every July – South Africa’s winter – Knysna is home to the Knysna Oyster Festival.

It’s a celebration of food, drink, comedy, fitness and the local community. I went along for two nights this year to the ‘Pick and Pay Flavours of Knysna’ night, for all the food, and then the ‘Comedy Chuckle’, for a good laugh.

Kinda makes sense at an oyster festival. It was R180, so around £10 – amazing value – and we were given these little books holding golden tokens for each of the stands to try the local restaurants’ oyster offerings. 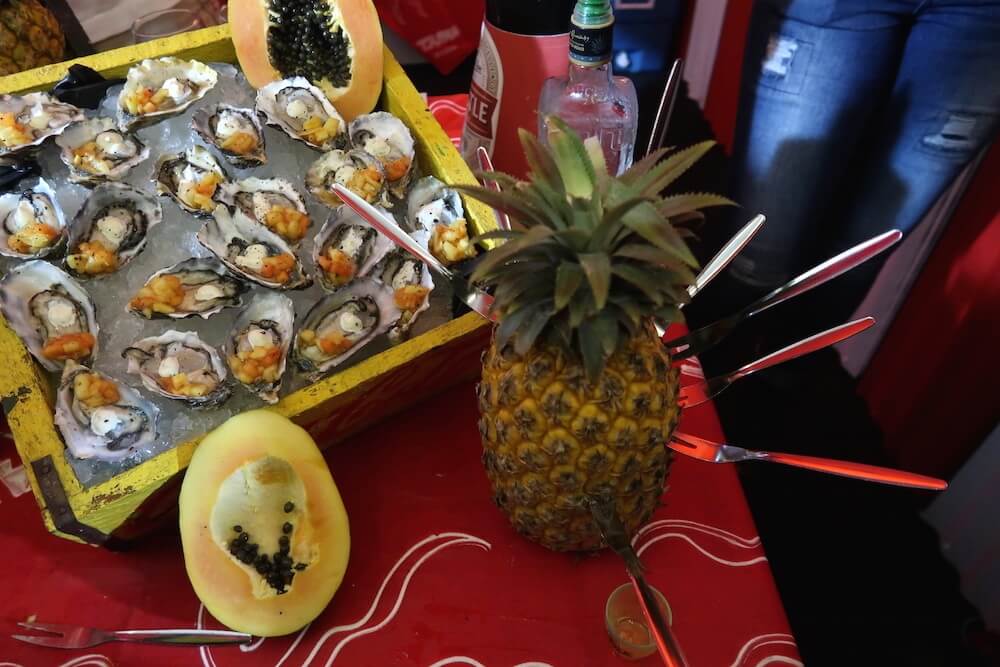 There were nine different oyster stands to try – some with totally bizarre toppings. As you’ll see in the video below some had so much topping you couldn’t even get to the oyster to swallow it. Tasty though, we got through it it was fine.

And then I had another one that was served in dry ice with Champagne. Watch the vid, you’ll see.

Check out my video of the Knysna Oyster Festival!

The Flavours of Knysna night at the Oyster Festival was definitely a good way to see just what can be done with an oyster and a bit of imagination, although what can do, and what you should do, are always two very different things. The most bizarre, was the one from Blu Restaurant which featured a chocolate base and a strawberry, onion chutney and bacon topping, then there was an oyster and then a shot of sparkling wine to top it off. I think I enjoyed it?

At the end of the night everyone voted for their favourite oyster, and the most decorative stand, and Blu won the latter. Go them. Some of the event was sponsored by Heinz, so they were giving out a three course meal – you see above. There was a fish soup starter (deliciously warming on the cold night), fish tacos for a main and then a chocolate mousse with meringue and nuts and berries for dessert – great for anyone who wasn’t keen on the oysters.

So basically we feasted our way around the festival, and then hit the wine stands.

There were 5 different wineries showing off their reds, wines and fizzes, including Bottega and Lanzerac. I’m now a big fan of both.

I love eating and drinking like this – such a good way to try a lot of food and drink in just one night, and a great introduction to the food and drink of South Africa. Outside they were having a braii (BBQ to anyone who’s not from South Africa). In a race against the clock they had to make the best marinade for the fish they were cooking. People were getting very excited around the six or so stands that were competing.

Once they’d finished you could try their creations – another opportunity for eating – unfortunately we didn’t quite get there quick enough though. See my list of tips below… My trip to the Knysna Oyster Festival was the first time I’d ever watched an oyster shucking and eating contest. And a definite confirmation, if ever I’d wondered, that I definitely don’t want to be a part of one. They’d go up in twos, and one would quickly shuck while the other one knocked them back. Down the hatch.

There was definitely a different vibe here to the other African festival I’ve been to – Lake of Stars Festival. Different but equally brilliant.

The next night we went along to the ‘Comedy Chuckle’. I was worried I wouldn’t understand the cultural references in the jokes and so not find it funny but it was hilarious. It’s been ages since I watched live stand up – loved it. Going to a comedy show in a different country, I realised, is also a really good way to learn about the current topics and issues in the destination. Kagiso Mokgadi, the first comedian, was all about white people jokes, black people jokes, love, hate, and funny stories about cows on farms. I won’t ruin his set, watch him on YouTube.

The second guy, Nik Rabinowitz, is a famous TV presenter, he’s been on Mock the Week over here and does loads of media in South Africa. His stories from life as a bingo caller, commentating sport, language, growing up and the changing culture of South Africa was educational and funny.

It was interesting to see an example of comedy in South Africa – both said a lot of things I just can’t imagine comedians saying in England, but I spoke to our guide Dave about it after and he was saying how sometimes they need the comedy to break down the taboos, and to get people talking.

Another great night at the Knysna Oyster Festival.

5 Tips for the Knysna Oyster Festival 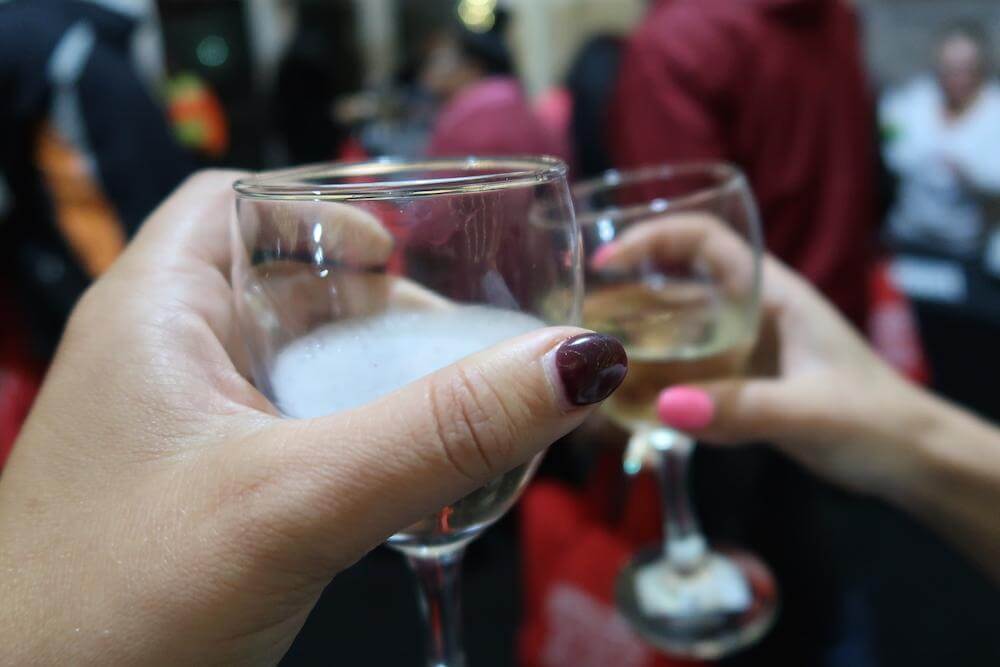 July is winter. There were heaters outside but as you may have seen in my What to Pack for South Africa post, the winter style in Knysna is to wear a K-Way puffa jacket, boots and some sort of scarf – for girls and guys. I on the other hand had to layer up two hoodys and all my summer tops underneath.

2. Keep an eye on the braii

Gutted we didn’t get to try any of the creations outside at the BBQ. We were too busy in the tent scoffing oysters and didn’t realise the cook off had finished. Don’t actually even know who won.

Yep, I know I said it looked grim, but it’d be fun right? Maybe have a little practice at shucking beforehand but I think it’s in the spirit of the festival to get up there and give it a go. Just put your name down when you get there.

…On the Flavours of Knysna night anyway. It was tempting to buy from the stands outside beforehand because we were so hungry but it would’ve been a waste of money. You can definitely fill up inside.

Save yourself for another night. At the Comedy Chuckle everyone was troffing on fish and chips. I’d already been down to JJs Restaurant on the waterfront though – definitely no room for anything else after that delicious butternut squash soup.

5. See what else is at the festival

The festival lasts ten days, there’s loads of other nights and days and activities.

Live performances, a whisky and jazz cruise, fashion shows, talent shows, loads of cooking and crafts for kids, brunch day, night runs, night markets and finally the Maserati Big 5 race. There are 5 events over the 10 days, an 80km cycle, a 21km forest half marathon, a 15km trail run, a 1.6km open swim and a 32km mountain biking loop. There can only be ONE WINNER.

Or just do as I did and go and eat oysters – up to you.

[red_box box_bg_color=”#ededb6″ box_text_color=”#000″ content_width=”1140px” padding_sides=”30″ padding_top_bottom=”10″ content_align=”center” ] I was invited to visit Knysna with South Africa Airways and South Africa Tourism. I would definitely go again, as part of a longer trip along the Garden Route. I’ll let you know when I manage to fit it in! [/red_box]

14 Local Things to Do in Knysna, South Africa