The Wild Center in NY: a Museum Without Walls

Generally, I’d say I don’t really like museums. I don’t like walking around looking at stuff, reading the descriptions and learning about things that’ve already happened. I’d rather touch, interact and get involved.

There are a few museums that are very different though. My favourite museum is the Science Centre in Tokyo – you can’t beat robots and space travel.

And the Wild Center in New York is definitely a close second place. 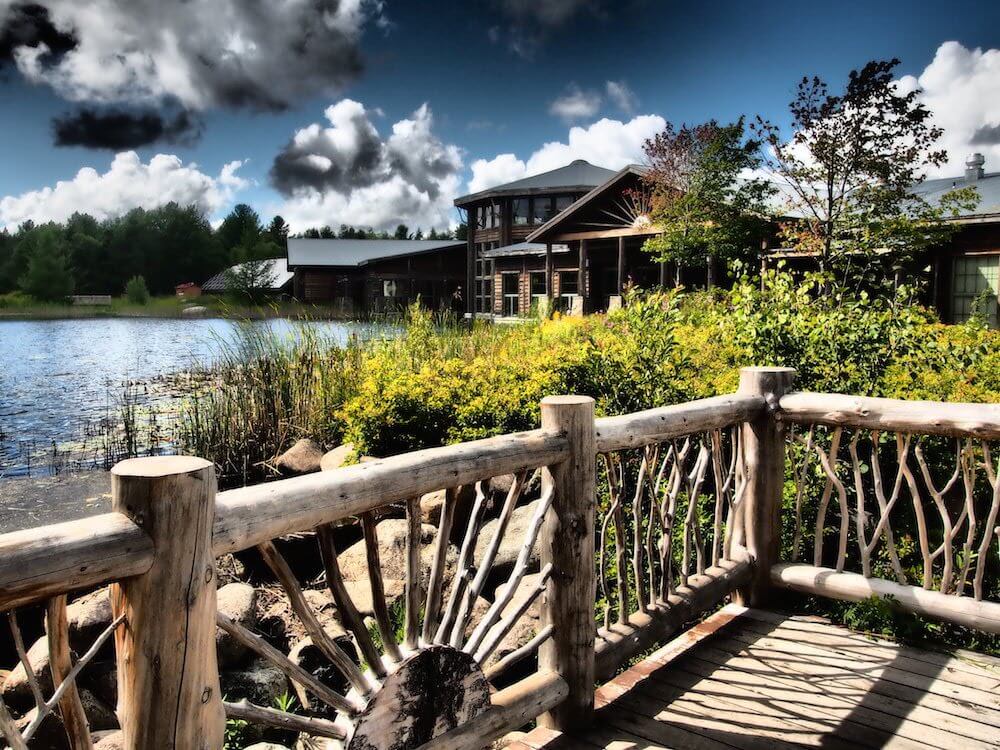 Why the Wild Center is so good

The main aim of the Wild Center is to connect people with their surroundings, and how they can benefit them rather than destruct. The creators want to ignite a passion for the world and to encourage visitors to explore their own back yard, whether that’s in the Adirondacks or at home. By creating this ‘museum without walls’ (their words), they want to show rather than tell and let visitors be part of the creation, the present, and the future of the Wild Center, and the Adirondacks in general.

Their motto is to ‘leave no child inside’. I love this. Evidentially their Pines Nature Play Area may look like a pile of wood to some, but the whole point is to get kids to explore what their mind is capable of. Pretty much the basis of all the work done here. You can see what I chose to do… The Adirondacks are one of the few places in the world where people have actually had a positive impression on their surroundings and helped nature get better, the centre wants to help that mindfulness continue. The Wild Center has been around for a few years now, but the new attraction, the Wild Walk, opened on July 4 2015. I visited just a few weeks later, to see why the attraction had already eclipsed predicted visitor numbers in it’s first month.

Walking out onto the platform I didn’t quite realise how much ground the Wild Walk covered. To start there’s a 60-foot long quiet zone – a natural area for birds to feed and nest. Wires run around to keep the bears out, and the food in. The walkway is raised high off the ground with steps and bridges to get you around. The architect has made a special effort to ensure as much of the attraction is accessible by as many people as possible. Pushchairs, oldies and anyone on wheels can get to see 95% of the Wild Walk, no worries. The Wild Walk is interspersed with steel poles that have now become icons of the whole centre. Placards point out the wildlife in the area, and tell you more about what you’re seeing. Not in OTT detail, but just to pique interest. If you want to know more you can ask the friendly staff.

There are over 35 exhibit experiences built into the wild walk, including the chance to sound like a woodpecker,  a photo op with bears, bugs everywhere and even somewhere to sit and admire the view. The bird’s nest was definitely one of my favourite exhibits. Apparently it’s only slightly bigger than the biggest bald eagle’s nest ever found. It was huge! It’s also the highest point of the walk and a lot of fun to ‘play birds’ in, like we did. – I don’t know her. I do really, that’s Cailin from Travel Yourself doing ‘the flap’.

I also enjoyed the ‘bird game of life’ and would definitely have had a go if I’d had more time. Basically, you’re a bird and you need to survive. As you make your way round the board you have to survive the hurdles and get to the end, but ‘game over’ could happen at any time. Apparently 50% of birds die before old age, and this shows us the hardships they go through.

We were all like ‘but the poor little sensitive children!’

Tracy, the PR manager, was all like, ‘they need to know’. I like that attitude. They’re not pussyfooting around the kids at the Wild Center. This is to teach them real life, and the tough conditions wildlife has to deal with, especially if humans make it even harder for them. The spider’s web was pretty cool too. A huge rope web 24ft off the ground. The kids were going crazy jumping around – I was too scared of them to join in. Unlike my friend Sandy, in the red, who sprawled. Running along the suspension bridges was fun of course, for me as well as all the kids. You see that trunk at the end? That’s made out of cement with bark stuck on to look like a huge tree. There are windy steps inside – it’s awesome.

Inside the Wild Center

There are even more exhibits inside the Wild Center, and so many things to do. It starts with how the ice age affected how America looks now, through to how we can help preserve it in the future. There are over 50 native Adirondack animal species hee, 900 animals, including birds, mammals, fish, reptiles and amphibians. By seeing these up close the center hopes to encourage the kids to foster conservation mindfulness. The new creative centre has been really popular with visitors too. I definitely would’ve had a go, if there’d been space. You can sit and create artwork in a calm space based on what you’ve seen and learnt around the centre.

And if you get a chance, try a cookie, or two, from the cafe. Mmm gooey. One last thing I really liked about the award-winning Wild Center was that it brought in the locals into the creation. Obviously they were donors, but the walkway was paved with thank you messages to the people who’d made the whole project possible. There were different parts dedicated to different people meaning the whole tapestry of the place was built with people at its core. With all the live exhibits, outdoor experiences, multimedia shows and hands on things to do the Wild Center is definitely not just another boring science and nature museum!

Find out more about the Adirondacks

I was a guest of ROOST ADK in the Adirondacks – you can find out more about the trip, and see the rest of my coverage at eplny.com/vickyflipflop.

Me and the Sunday Gospel Service at St Augustine's Church, New Orleans

The 8 Best Hot Springs in Mexico