Just a Little Update on My Week on Gili Trawangan

I’ve just spent the last six days in the Gili Islands – Gili Trawangan to be precise. I can’t lie, or pretend to be cultured, the week has consisted of too many Bintang beers, sitting on the beach or in bars, food at the night market and drinking games that only ended to go to the clubs. My week on Gili Trawangan was awesome, apart from one thing… 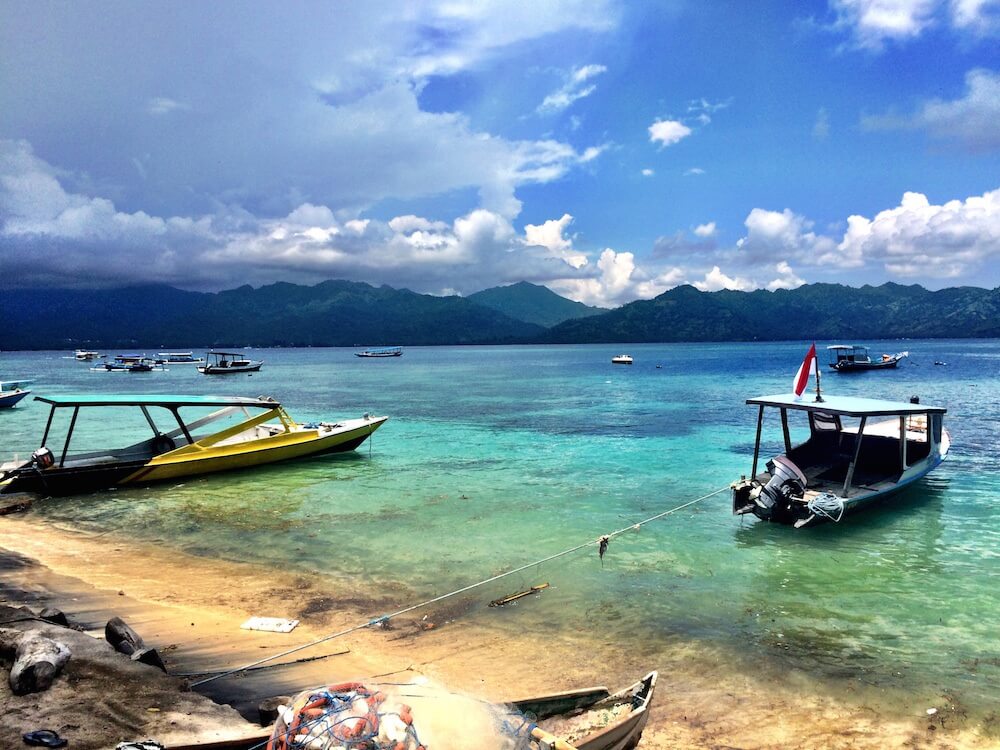 On the first night after only one Bintang or possibly two at most I walked into a step – a tiny little step that would have had that helpful black and yellow tape on in England. I stubbed my big toe and ripped at least a few mm of skin off the top exposing the gruesome underneath. Off I went to nurse it and wrap it in toilet roll and on the way back to my seat I was so busy smiling at my new friend Chloe, because I looked so stupid with my toe wrapped up, that I did it again on exactly the same spot. By the end of the night my flip flops had broken and the approximately 2cm2 gouge was filled with sand. God it was disgusting. So basically this prevented all the scuba diving and surfing I was planning on doing for the week. I couldn’t even wear the flippers when I went snorkelling. It still hurts now, especially after someone trod on it last night undoing all my hard work of sitting around to rest it.

Don’t worry, I managed to soldier on 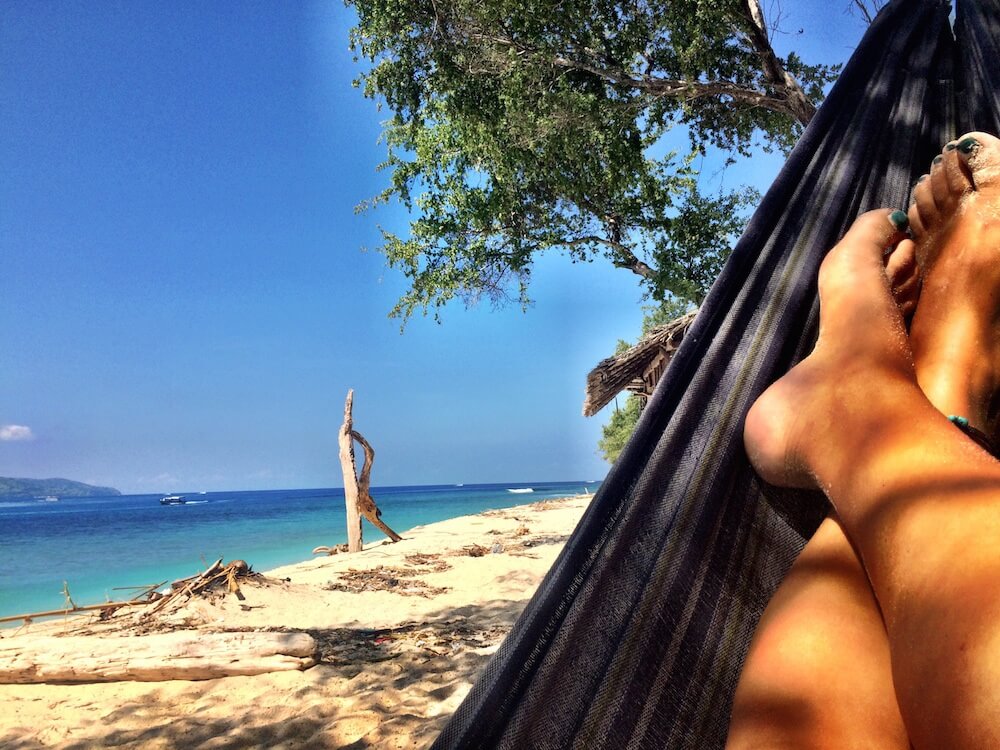 So all that was left to do for my week on Gili Trawangan was eat, drink and enjoy the company of all the awesome people I met at La Boheme Hostel – probably one of the best hostels I’ve ever stayed in. I met Chloe (from Napa) and Brad (from Seattle) as I was checking in and seeing as we were in the same room we quickly became good friends. We actually hung out together pretty much every minute of the six days. It was a sociable hostel and Alex and Charlotte, both Brits, soon joined the group. With his Inbetweeners and Alan Partridge references Alex was a funny guy. Then came Jason, full of stories, some good, some not, but it’s always more interesting to have a chatter in the group. And there were other friendly floaters along the way that helped to make this week one of the most fun of the trip.

Drinking games, who-am-I games and some deep, deep chats later and the week passed by in a flash. 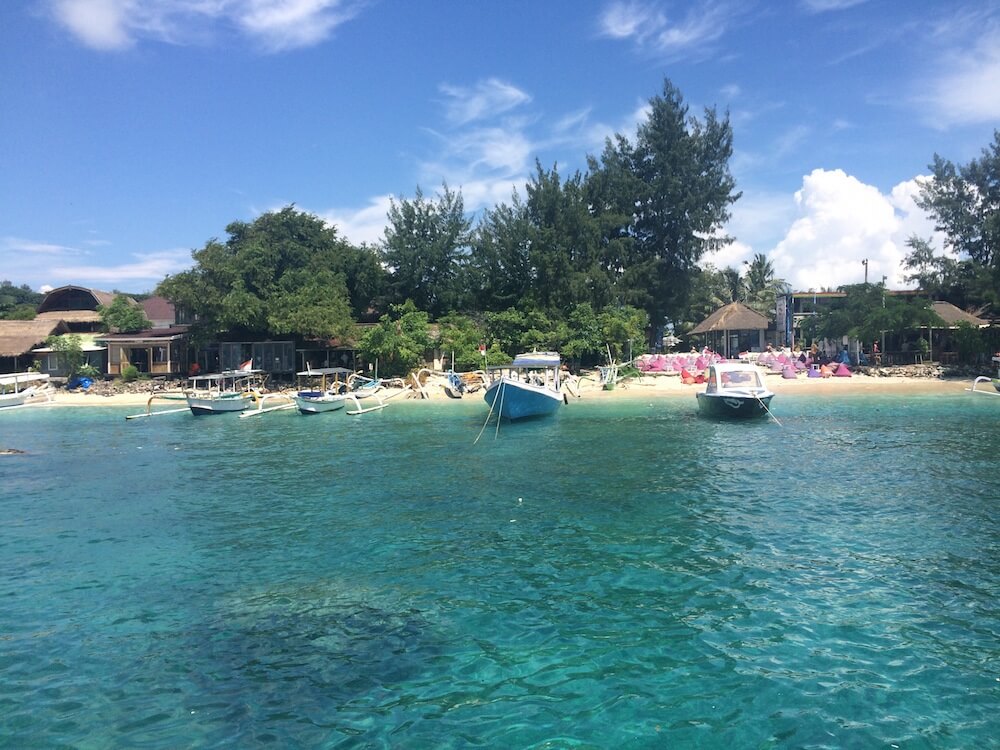 The Gili Islands are made up of three islands of the coast of Bali and Lombok in Indonesia. There’s Gili Trawangan, Gili Meno and Gili Air. I spent all six nights on Gili Trawangan, affectionately known as Gili T. On day four I decided to take the boat over to Gili Meno – a paradise island more popular with honeymooners than party people. It was stunning. I just lay about reading The Bell Jar for the second time and eating my new favourite lunch, Nasi Goreng – spicy rice with egg on top and prawn crackers on the side.

To get around Gili T you can either walk, like I did, or use one of the horse and carts. There are no cars on the island so the only traffic sounds you can hear are the horn of the guys in the cart. These are pretty scary when you’re walking round at night though – the horses suddenly appear eerily in the distance. Reminded me of the Woman in Black film.

One of the best nights on Gili T was spent in a treehouse overlooking the beach at Kuta Bar. The six of us from the hostel had a few beers on the go and ended up chilling in there for over 7 hours just watching the sun set and playing games. Some nights were spent drinking the hostel and others at the ridiculous amount of bars and clubs that line the beach at the front of the island.

Scuba and snorkelling – that’s what people come to Gili T for. Unfortunately with ‘the injury’ full participation in both were out. There are loads of shops on Gili T to look around with all kinds of things to tempt you that you don’t need. I ended up buying a bracelet and an anklet and it took some will power not to get more. If you want to know what you can do on Gili T, 22 Cool Things to Do on Gili T is on its way.

With the lack of decent Wi-Fi, cool people and basic living it reminded me a little of my Tao Sailing Experience in the Philippines, although I don’t think anything will ever be quite the same. After six days I decided it was time to move on and Lombok was calling. Just 12k for the boat (70p) and a quick motorbike ride and here I am to spend the last few days of my Indonesia jaunt chasing waterfalls and hopefully hiking volcanoes.

23 Cool Things to Do on Gili T, as Tried By Me
Tao Experience Review + 13 Reasons Why It Was SO Good

52 Top Things to Do in Ho Chi Minh City

What it's Like to Stay at a Capsule Hotel in Tokyo