I spent six days on Gili T, or Gili Trawangan to give it its full name. The beautiful paradise island attracts party people, scuba dubas and snorkel lovers as that’s pretty much all there is to do there. I like to think that despite my injury, I made a good effort at doing all the cool things to do on Gili T and would like to share my new found knowledge with all my beautiful readers.

I can’t lie, or pretend to be cultured, the week has consisted of too many Bintang beers, sitting on the beach or in bars, food at the night market and drinking games that only ended to go to the clubs.

Gili T is pretty cheap, but the trouble for me was that it was so cheap I consumed more, totally cancelling out the cheapness. Standard behaviour. I spent around £200 for the week, accommodation, beer money, food and all. Here’s how…

1. Stay at La Boheme for a cool hostel and to meet people. 2. Don’t stress about finding the best price for scuba diving.

There’s a cap of $35 for everyone. Just chat to people and go with one you like. 4. Do yoga at the Yoga Palace.

You get a discount if you stay at La Boheme as it’s just opposite.

5. The snorkelling trip that’s advertised everywhere on the island is actually pretty shit as you don’t see much and you’re packed onto a boat. I’d still recommend it though as it’s cool to get out on the water and dive in from the sides. 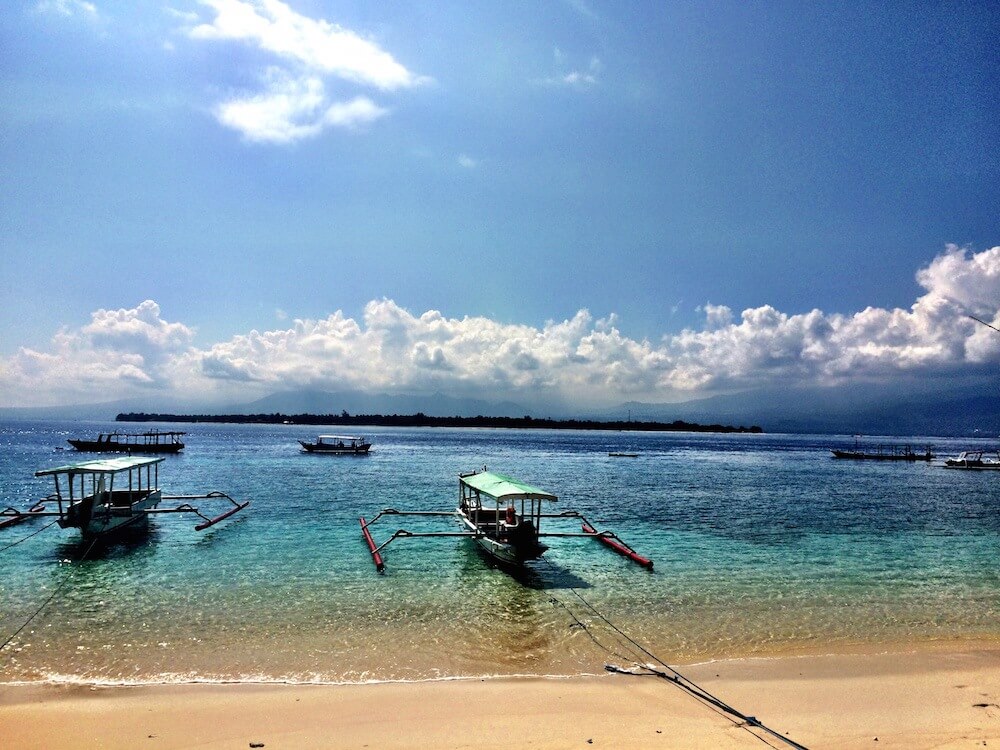 Don’t stub your toe worse than you’ve ever stubbed it before at Sama Sama Reggae Bar, like I did. Meant I couldn’t do anything but drink and eat for the week. Terrible.

7. Don’t pay to get on the daily boat party, find the right people at night by this bar and you can get a band to get in free. 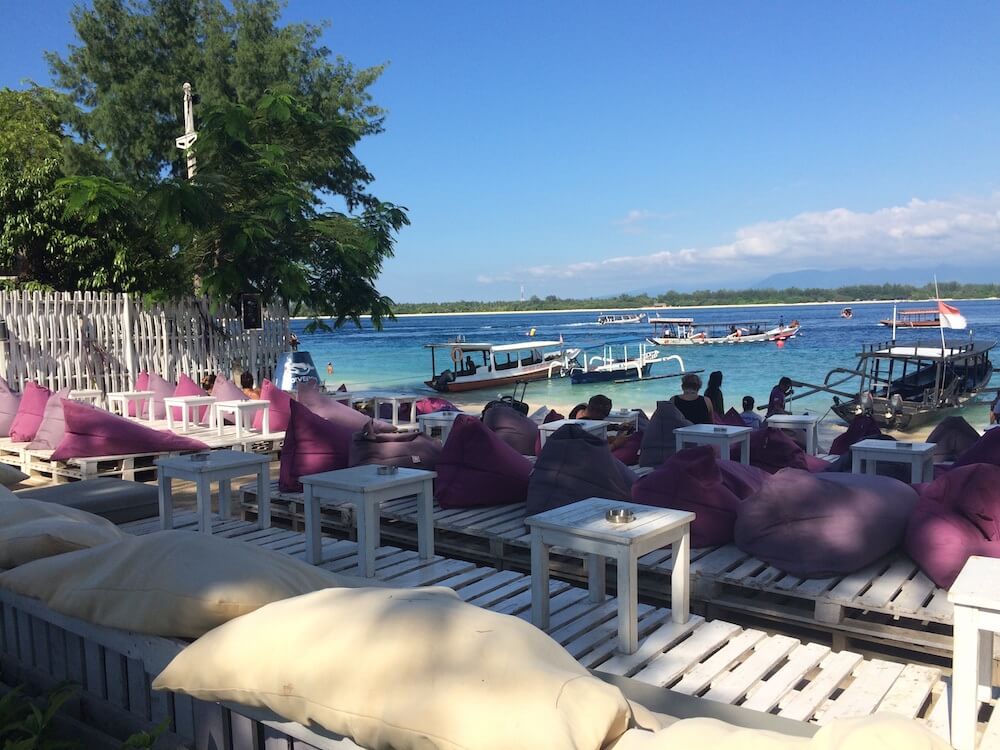 Where is Gili T?

The Gili Islands are made up of three islands off the coast of Bali and Lombok in Indonesia. There’s Gili Trawangan, Gili Meno and Gili Air. I spent all six nights on Gili Trawangan, affectionately known as Gili T. On day four I decided to take the boat over to Gili Meno – a paradise island more popular with honeymooners than party people. It was stunning. I just lay about reading The Bell Jar for the second time and eating my new favourite lunch, Nasi Goreng – spicy rice with egg on top and prawn crackers on the side.

To get around Gili T you can either walk, like I did, or use one of the horse and carts. There are no cars on the island so the only traffic sounds you can hear are the horn of the guys in the cart. These are pretty scary when you’re walking round at night though – the horses suddenly appear eerily in the distance. Reminded me of the Woman in Black film.

Or the falafel, or the veggie curry, or the Nasi Goreng, it’s all good. They also have happy hour between 6 and 8 and you can get cheapo beers and cocktails with tapas.

9. Hang out at the treehouse at Kuta Bar. 10. Watch the nightly turtle show at the Lombok Grill.

I didn’t actually get to do this but apparently the turtles all come up as the sun sets and you can see them from the restaurant.

11. Rent a cycle and explore the island. The ones that charge 30k probably don’t have brakes so you might be better off paying 50k. I randomly saw this reggae band having a photoshoot. They were playing Tracy Chapman when I went. Loved it.

13. Go there at sunset too. We played Frisbee as the sun went down and they pumped out some minimal techno tunes. In those minutes life was brilliant, even more so than usual. There are loads of clubs but every night there will be one particular one that holds the party. It will be crazy.

One of the best nights on Gili T was spent in a treehouse overlooking the beach at Kuta Bar. The six of us from the hostel had a few beers on the go and ended up chilling in there for over 7 hours just watching the sun set and playing games. Some nights were spent drinking the hostel and others at the ridiculous amount of bars and clubs that line the beach at the front of the island.

15. Eat as many desserts as possible at the night market. Us three girls agreed the donuts were some of the best we’d ever tasted. You can pick what you want and then it’s all cooked to order.

17. Chill out at the nightly cinema at Villa Ombak. Free popcorn! 18. Drink from a coconut from the stall at the top of the island.

Not only will you really feel like you’re on a desert island, it’s also good for you.

19. Spend all your spare money on jewellery, or bikinis, or I heart GT tshirts you’ll never wear again. There are actually some really nice shops. 20. Just relax. There’s virtually no crime on Gili T and if anything goes wrong the facts are brought to the village head who decides the punishment.

Check out this tourist mug who was forced to do the Walk of Shame on Gili T after robbing another tourist last week.

21. Sit on the beach bean bags lining the beach and read a book – no need to even buy a drink at most places, unless you feel too guilty. 22. Eat at Kaya Café. I had a delicious halloumi and quinoa salad with a smoothie.

Perfect for lessening the guilt of all the huge Bintangs I was drinking.

23. Watch the sun set at Exile Bar. I had fish fingers here too and they were huge and delicious. 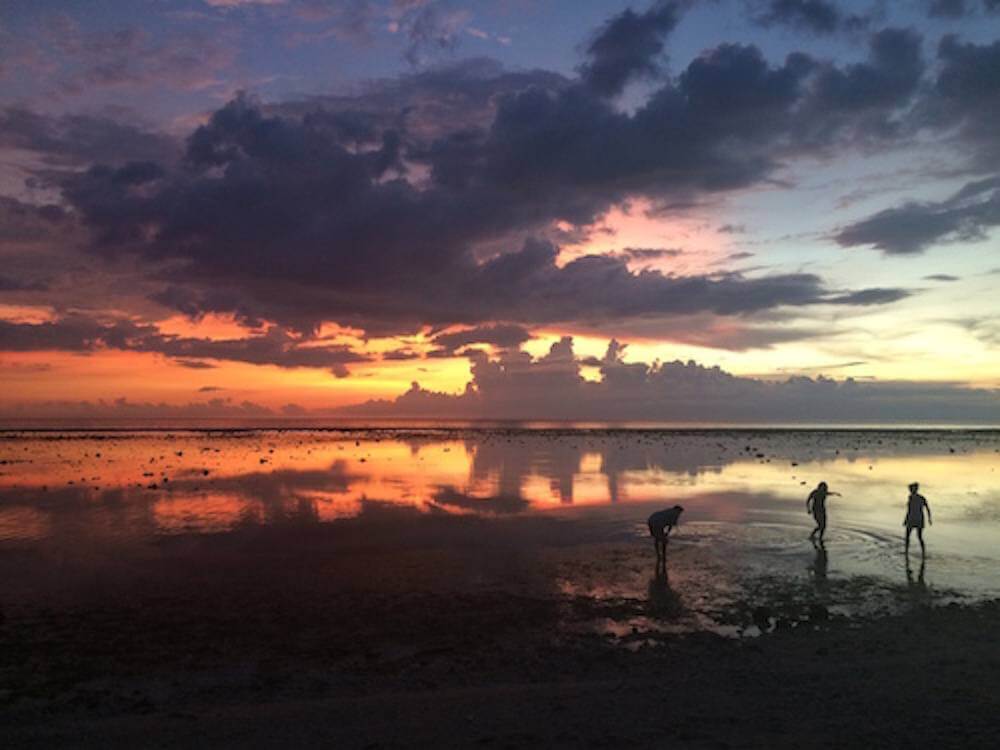 I had a brilliant week on Gili T and was sad to leave but excited to get away from all the delicious temptations the island offers. If you’re ever in Indonesia I’d definitely recommend adding it to your list of things to see and do.

Gili T is an awesome party island, as I’ve said, but if you’re over that way I’d strongly recommend you go to Gili Meno too. Getting from Gili T to Gili Meno is easy. The easiest and most popular way to get to Gili Meno from Gili T is to walk down to the harbour, to the white building next to the fruit shop, and buy a ticket. The Gili Island Hopping ticket is 35k one way (£1.81) and 70k return. Any maths minds out there will see there is no saving. But if like me you manage to lose the return ticket on Meno, you get to pay 105 instead. You can bring all your luggage on the boat to stay on the island, or you could just go as a day tripper, like I did. It leaves at 9:30am and comes back at 3:20pm – the perfect amount of time to get a feel for Gili Meno.

Things to do on Gili Meno 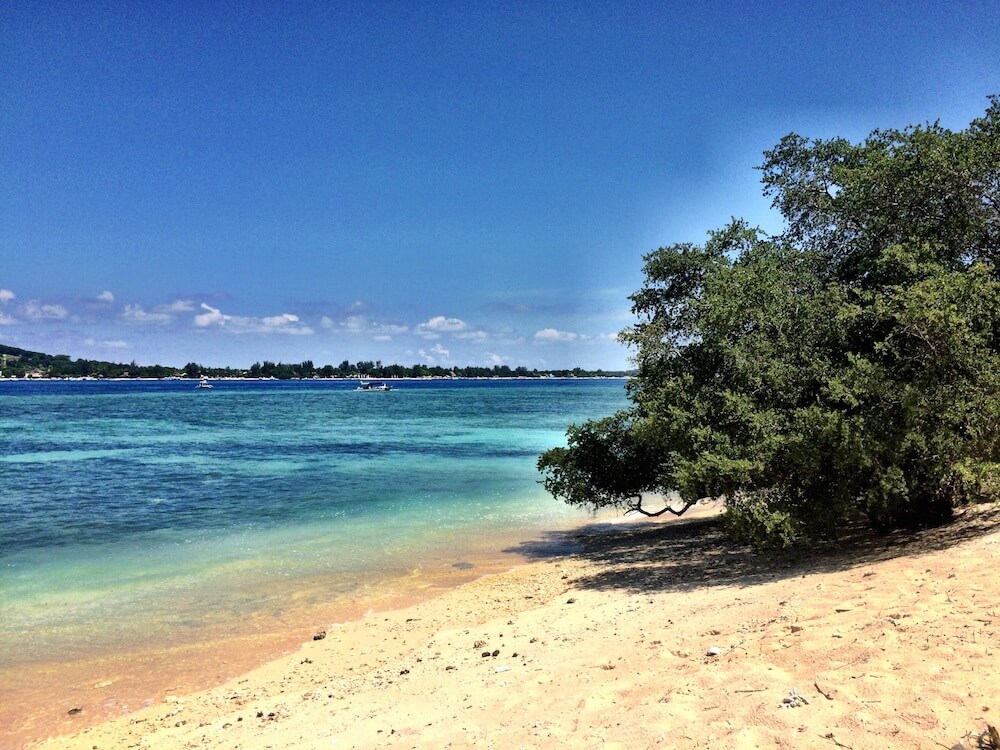 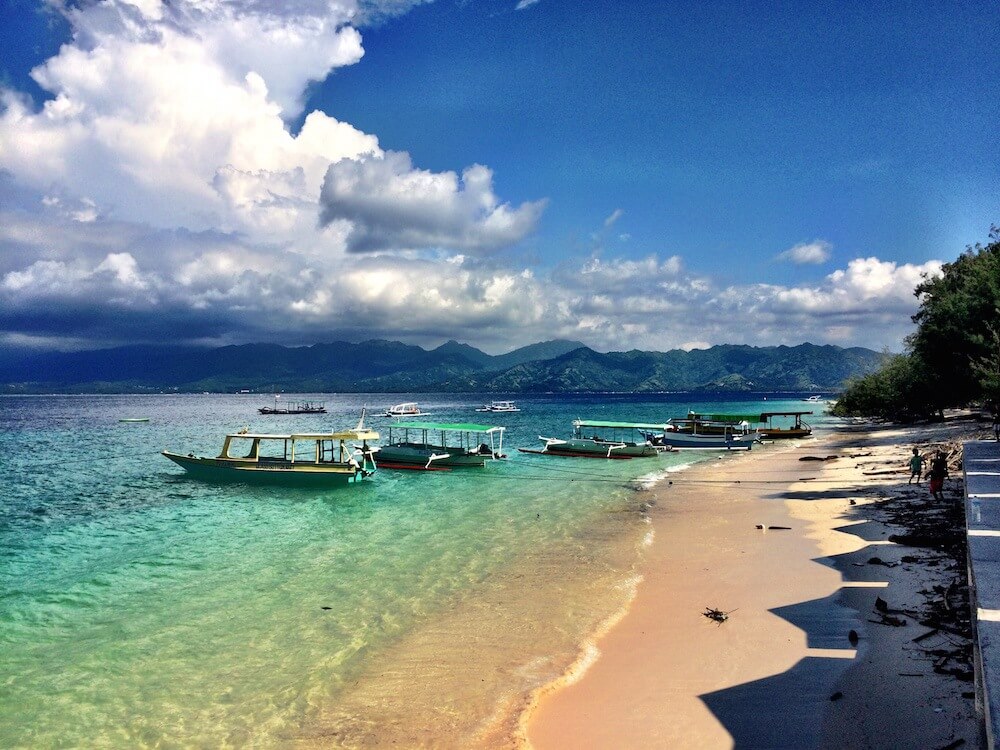 Not much! And that’s the beauty. I walked round the circumference which took an hour. Then I saw a man collecting flip flops off the beach so decided to help with the clean up. Then I sat in a hut on the beach for a few hours reading and eating Nasi Goreng. There were some good waves and I saw a few dive shops too but the whole point of Gili Meno is to relax, take in the beautiful paradise surroundings and chill out. I’m getting real good at that. Getting back to Gili T from Gili Meno 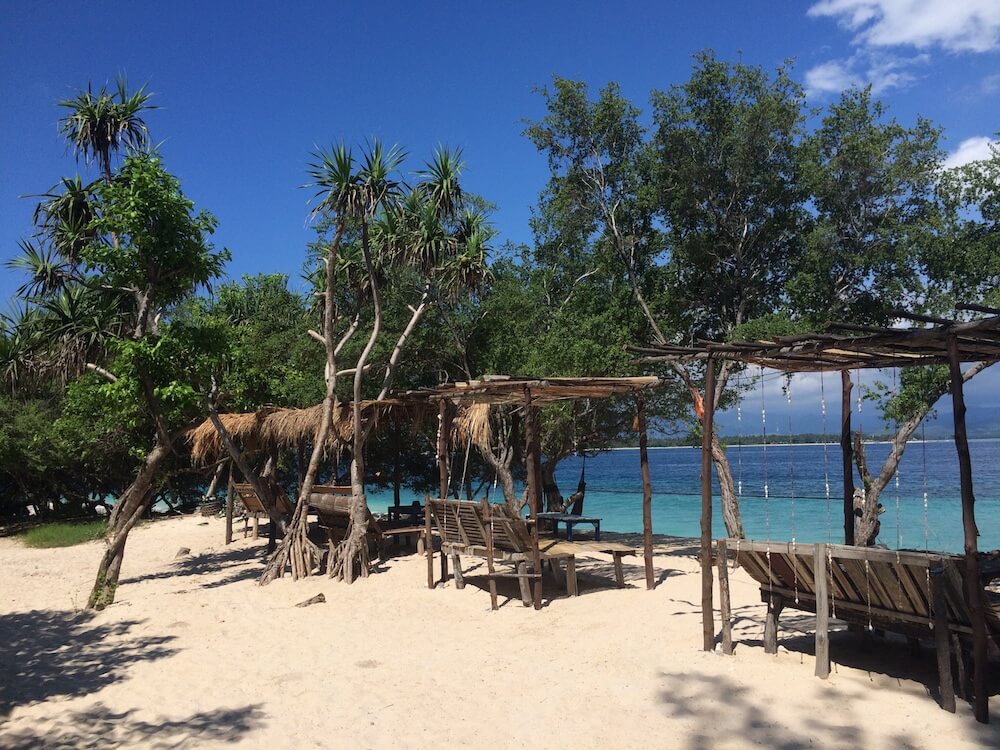 I was at the harbour where I was dropped off at 3pm. Just enough time for an ice lolly to lick while I was waiting. The boat was dead on time at 3:20pm and it took about 20 minutes to get back to Gili T.

Easy and as you can see from the photos, well worth it!

With the lack of decent Wi-Fi, cool people and basic living it reminded me a little of my Tao Sailing Experience in the Philippines, although I don’t think anything will ever be quite the same. After six days I decided it was time to move on and Lombok was calling. Just 12k for the boat (70p) and a quick motorbike ride and here I am to spend the last few days of my Indonesia jaunt chasing waterfalls and hopefully hiking volcanoes.

Has this made you want to go to the Gilis?

tagged in beaches, boat travel, restaurants, things to do in, underwater
Share:

52 Coolest Things to Do in Hoi An

How to Cycle in Kenting, Taiwan, on a Budget

52 Coolest Things to Do in Kerala, India