Want to know more about the cool animals in Costa Rica?

Our guide for the canal tour in Tortuguero was amazing. There’s no way I would’ve spotted all these creatures if it wasn’t for his eagle eye, especially the lizards. Even when I look at the photos below I find them hard to pick out. I keep looking at the pictures and wondering why I’ve taken photos of plants, and then seeing a cheeky lizard hiding in the corner. I saw all these creatures on a two-hour canal tour departing from the Pachira Lodge in Tortuguero. As well as seeing all the wildlife and fauna, it was also a lovely and relaxing trip just cruising up the canal.

We got pretty close to the animals on the canal tour, as you’ll see, and our driver pulled up nice and tight so we could get the best photos. Unfortunately there weren’t any sloths on this day, but we had seen two on the way in to the Pachira Lodge the day before. Mustn’t be greedy. Sloths need time out too.

If there’s one place on earth you can be guaranteed to see a wealth of wildlife, it has to be Costa Rica. The accessibility to nature and wildlife is unparalleled in any other country in Central America.

The country has everything, from bustling beaches to jungles which are packed full of wildlife for you to experience.

Let me introduce you to some amazing animals in Costa Rica, you’ll hopefully get to see when you go too.

But what makes this frog really stand out is the bright blue legs, which of course is where the name Blue Jeans comes from. 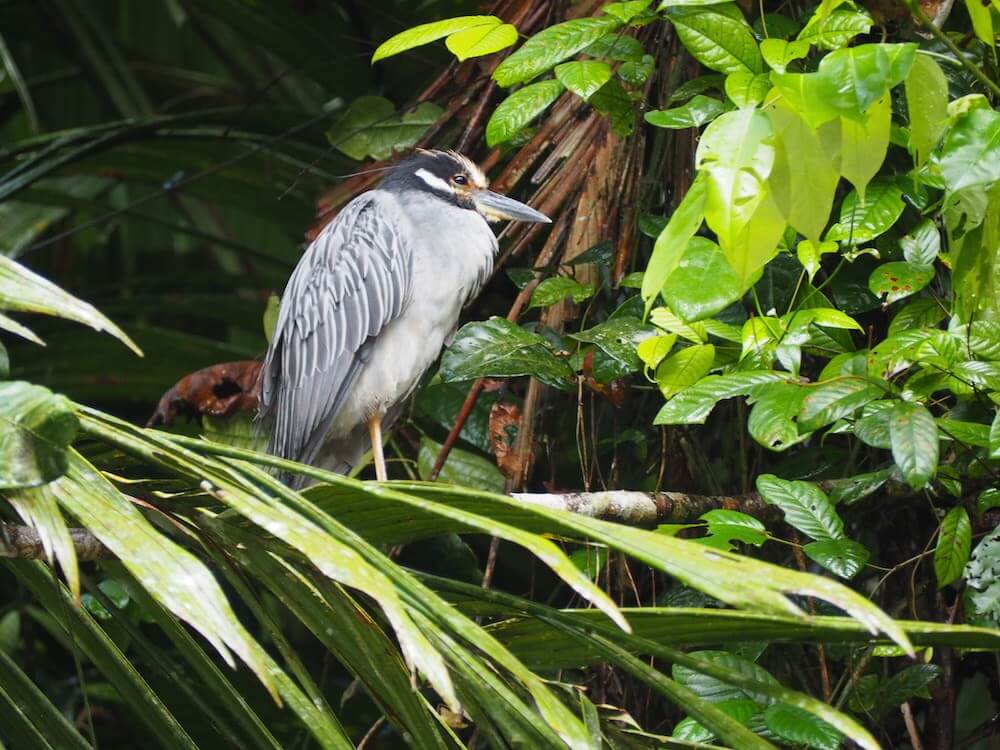 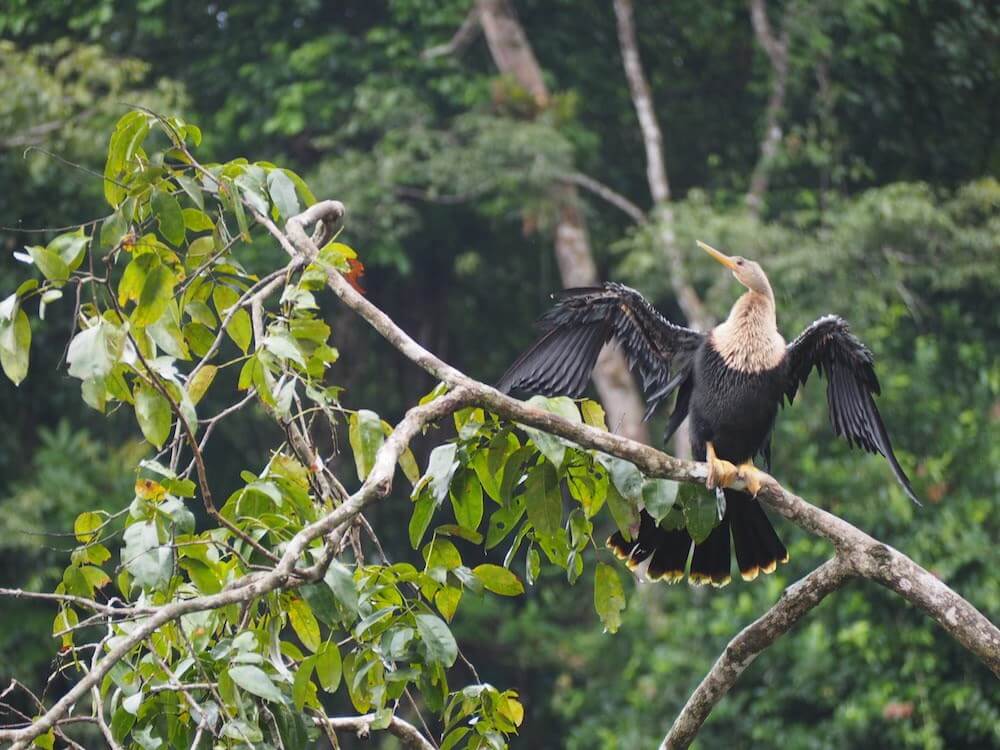 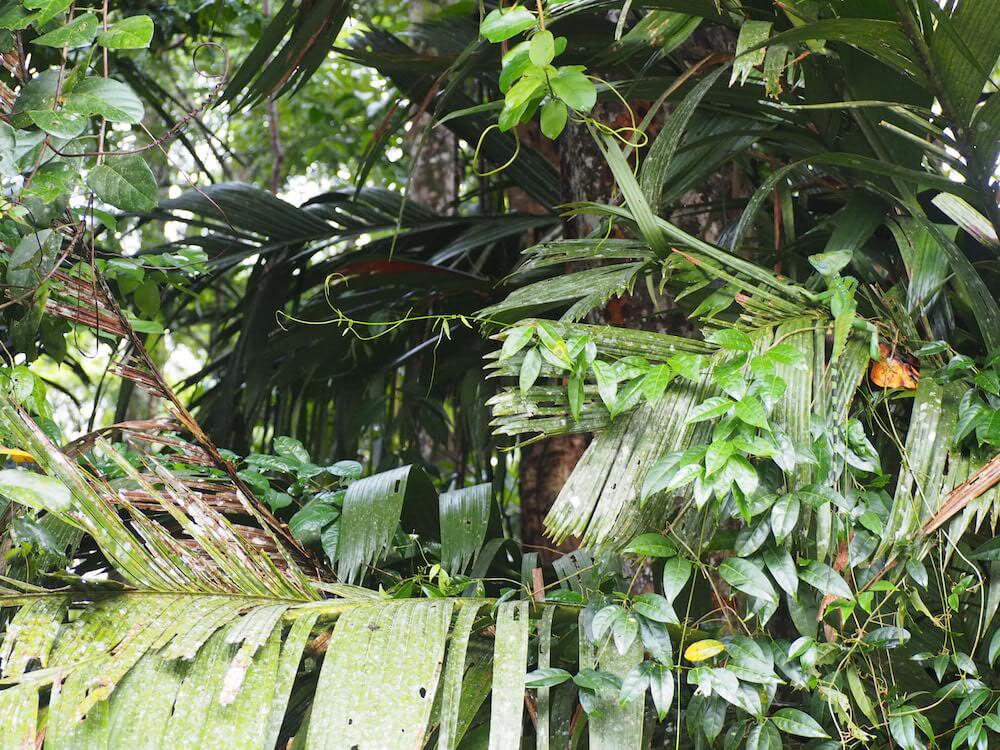 One of the most common monkeys I found in Costa Rica was the Howler Monkey, they are all over the place. They’re well known for the howls which can be heard over three miles away, making them the loudest primate in the world. 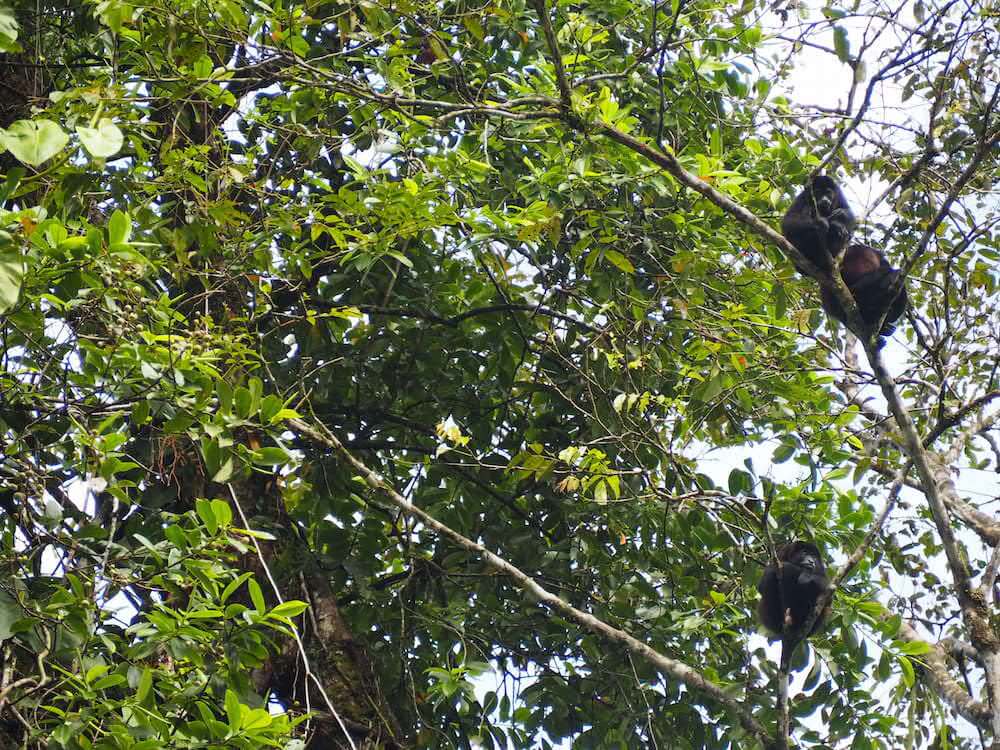 You can find them all over Costa Rica on the Pacific side. In Playa Del Coco, you can often see them in trees while in bars.

Although Spider Monkeys are a very commonly found species of monkey, I only saw one during my trip. They usually hang out on the Caribbean coast. 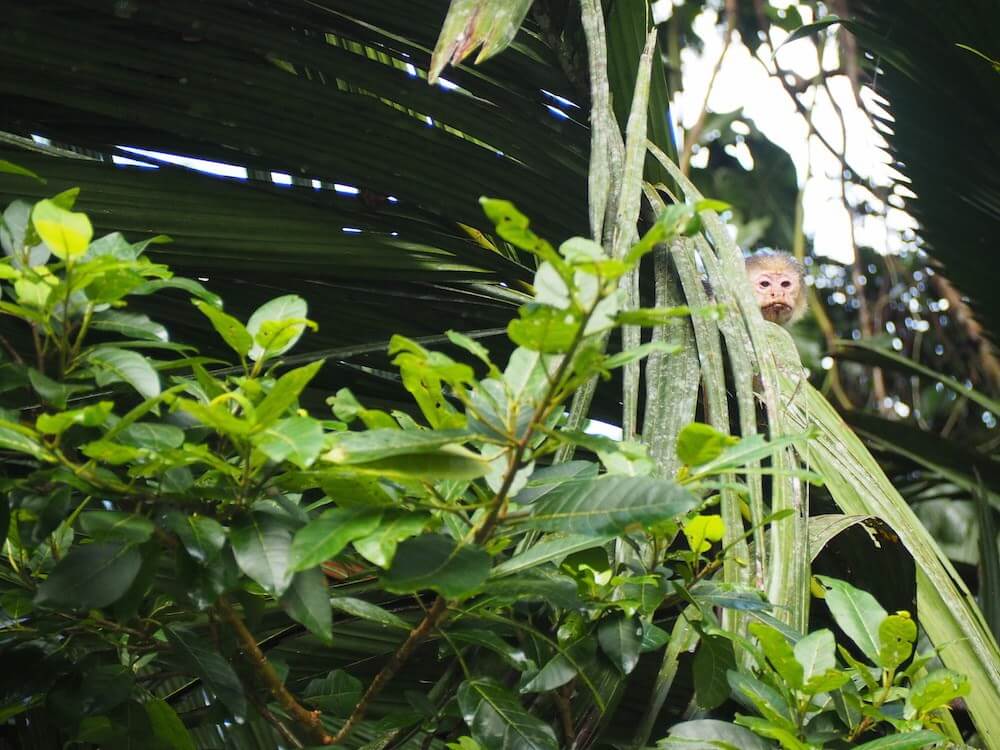 Spider Monkeys are known for being one of the most agile monkeys, thanks to their long tails. And you can quickly tell them apart due to their white coat and black hands. 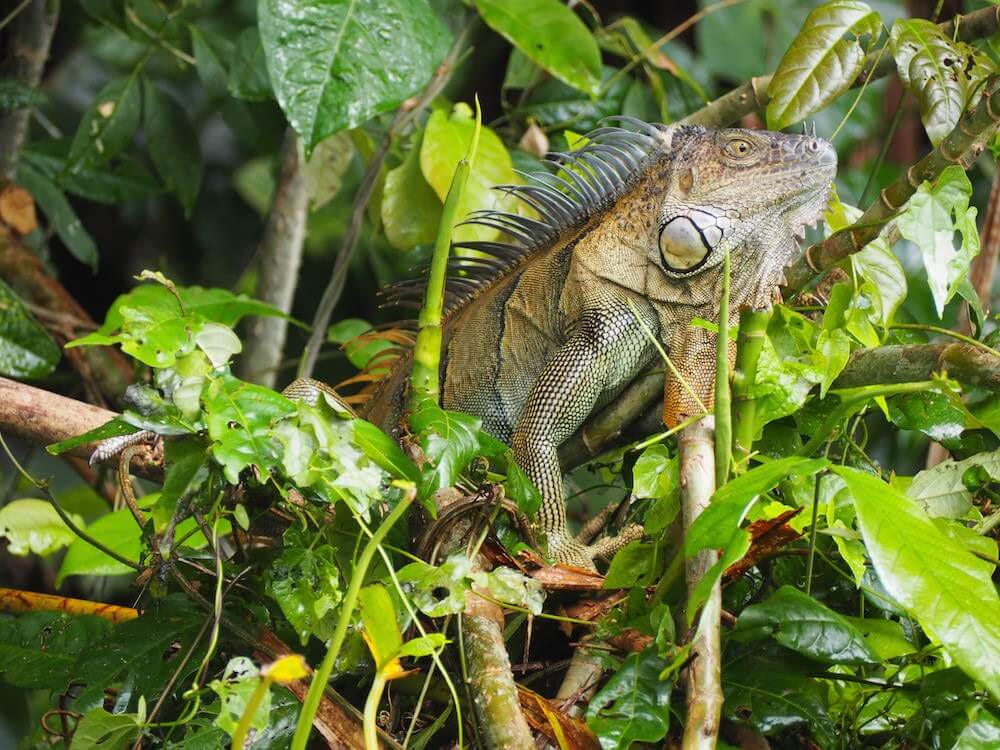 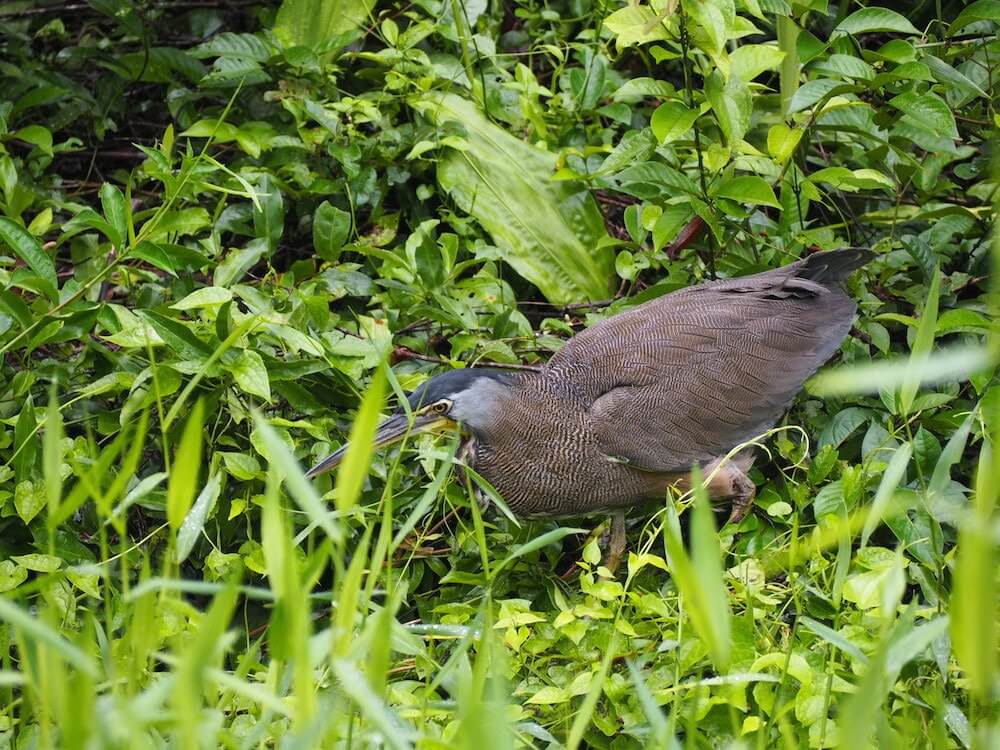 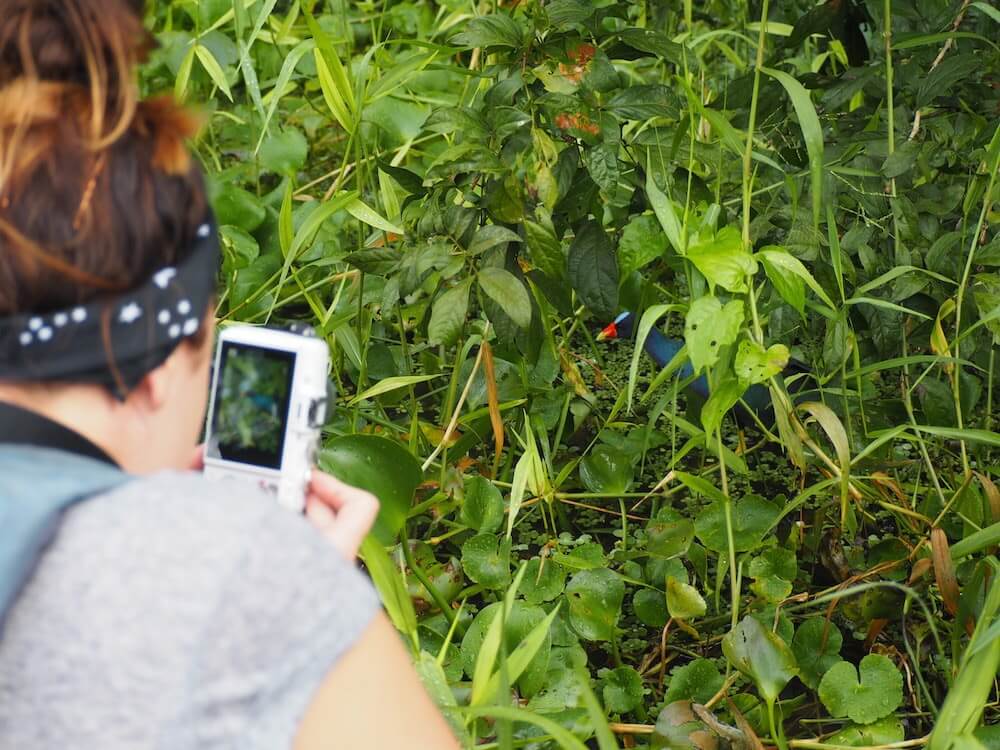 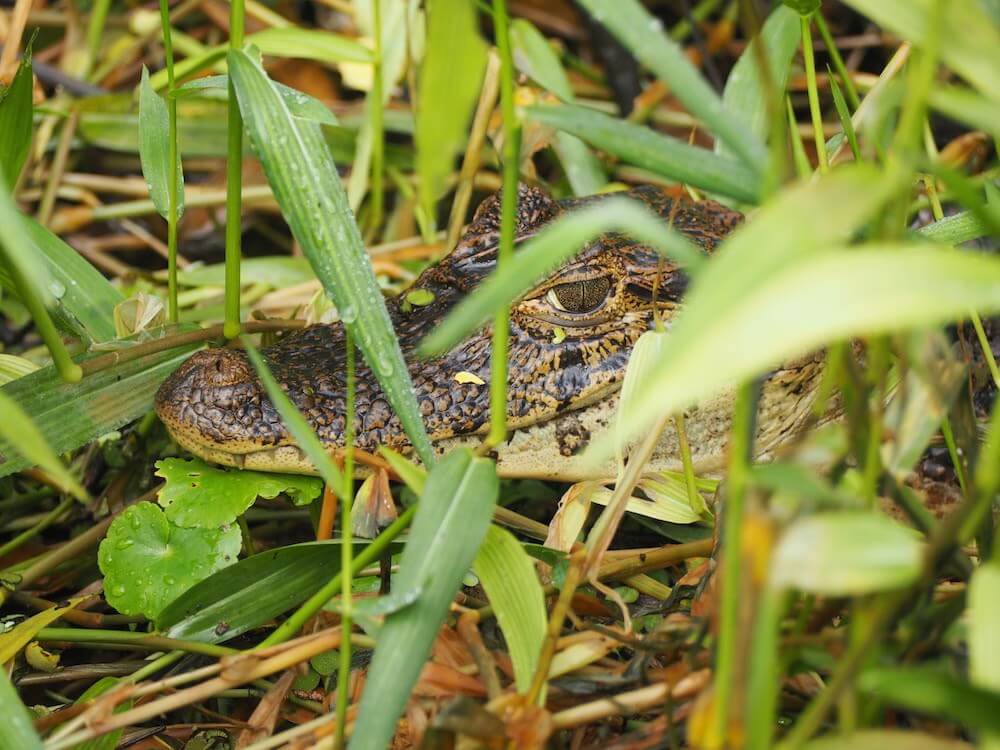 The Jaguar is one of the animals in Costa Rica that everyone wants to see, but not many people actually get the chance to. They are the only species of Panthera that can be found in Central America and they’re extremely difficult to find.

If you want a decent chance at seeing one, then you should take a trip to the Corcovado and Santa Rosa National Parks.

Margays are the second smallest species of wild cats and are found in Costa Rica. Again these beautiful wild cats are very hard to find due to them hunting at night. Keep an eye out in Samara, where it’s possible to see them strolling in gardens.

The wild cats have large brown eyes and a brown coat with distinctive stripes and spots, similar to a Jaguar.

One of the best experiences of Costa Rican wildlife has to be whale watching in Samara. Every year 25 species of whales migrate to Costa Rica to mate in warmer waters.

You can see Humpback Whales, with their newly born calves if you time it right; it’s a magical experience.

You can see them up and down the Pacific coast, but Drake Bay in the Osa Peninsula is one of the most popular locations. The best months to go there are between August and October.

You can see dolphins all over the coasts of Costa Rica. The main species are bottlenose, Risso’s, Spinner, and Striped dolphins.

They are among the most intelligent mammals globally and use whistles as a form of communication, which you can often hear when they get close enough.

You’ll find many rays on the coast of Costa Rica while you’re paddling in the waves, but their primary location is along the coral reefs of Costa Rica.

You can easily spot them due to their distinctive colors and the white spots on dark blue or black dorsal bodies. Along their long tail, you can also see two to six venomous spikes, so you must be careful.

If you want the best chance of seeing these beautiful animals in Costa Rica, take some diving expeditions around Playa Del Coco, Cocos Island, or Cano Island.

One of my wildlife highlights in Costa Rica was hatching the turtles that come to shore for nesting on the beach in Tortuguero. While there, you can watch thousands of turtles come to shore to nest and then make their way back to the ocean.

Ostional Beach is also a great place to watch them hatch and go back to the sea.

There are hundreds of snake species in Costa Rica, but the one that stands out has to be the Eyelash Palm Pit Vipers. They are known for being the most venomous snake in Costa Rica and their vibrant colors.

They can be a range of colours, from bright yellow, red, brown, or green, and they mostly live in the wet Cloud Forests. However, you can spot them around Arenal and La Fortuna while hiking around the jungle.

The Canal Tour in Costa Rica

The canal tour in Costa Rica was amazing. When I think back I can’t believe how many birds and creatures we saw in such a short space of time. It was so peaceful drifting along the canal and just hearing the birds calling to each other. As soon as the howler monkeys started the peace was pierced, but all creatures add to the atmosphere of the canal banks.

If you carry on and explore the rest of Costa Rica by Canal, beyond Tortuguero, you could see sloths, toucans, turtles, ocelots, pacas, tapirs, anteaters, and many, many other animals. It’s one of the best places in the world, to see all these animals!

Where to stay in Tortuguero

If you’d like to do a canal tour in Tortuguero, I’d definitely recommend staying at the Pachira Lodge in Tortuguero. I stayed in a chalet style room, loved the swimming pool, enjoyed a massage, and made the most of the buffet breakfasts and dinner. It’s also a great place to stay if you want to see the turtles late at night and early in the morning. Definitely one of the most incredible sights I’ve ever seen.

I was invited to Costa Rica by the Costa Rica Tourism Board in return for my thoughts.

Your Ultimate Guide to MS Dockville Festival
← Previous
7 Coolest Things to Do in Hamburg for Music Lovers
Next →
Click here to cancel reply.

Wow, so many cool species!! I am going to Costa Rica in January and I'm looking forward to doing this tour. Thank you so much

A Bucket List Canoe Trip Down the Yukon River | VickyFlipFlopTravels

[…] me and my travel blogger friend Paul trying to get in a rhythm in Costa Rica. We caused the whole kayak trip to change course as they didn’t think we’d manage to […]

[…] Tortuguero and how/when/why to see the turtles there. And read Vicky Flip Flop’s post on the kinds of animals you can spot on a Tortuguero river tour (and giggle at her imaginative bird […]

These Are The Best Things To Do In Costa Rica

What an amazing and beautiful range of animals to be seen! Great pics which capture them beautifully in their natural habitat. I'd love to visit somewhere like here one day - would beat seeing cows and sheep!

Oh it was sooo good. Can't believe we saw the sloths so quickly. I didn't actually expect that we'd even see them at all, so that was great. I hope you get to Costa Rica one day, it was somewhere I'd always wanted to visit.