Going to Bilbao BBK Live Festival was awesome. In fact a few of my most favourite festival experiences ever happened there. If you’re going to Bilbao Festival this year, then just take a few minutes to pick up some top tips to make the most of the festival.

The best thing about Bilbao BBK Live was the size of it, with 30,000 people a day. It felt a lot smaller than 180,000 at Glastonbury! This meant that the people we met on the first day, we kept seeing again and became a bit of a crew, which is always fun to have at a fest. I had gone to Bilbao BBK Live alone, but then found out my friend Helen from heleninwonderlust.co.uk was going too. So we hung out. I didn’t actually know her that well before but we had such a good weekend I love her now. And we’ve been to loads of festivals since.

Along with all the high points of the festival, there were definitely some lows too.

Here’s my guide to Bilbao BBK Live to make sure you’re well prepared and ready for what it has to throw at you.

I arrived on the Thursday and it was grim, as in real grim. The Bilbao BBK weekend went between rain and sun, never really brightening up as much as I’d hoped. I had my trusty red cagoole thing for the days, but the nights, yeah they were cold. Bilbao BBK Live is up on a hill, which of course makes for stunning views – you can see for miles, all the way out to the beach – but also means you’re up there with no break from the elements.

Trust me, don’t buy the cheapest, crappiest tent and sleeping bag you can find. You’ll regret it.

Getting to Bilbao BBK Live This was definitely the worst thing about the festival.

Bilbao City is at the bottom of the hill, the main festival site is in the middle and the camping site is at the top. This meant you had to get buses between it all. Obviously going from Bilbao to the festival is to be expected, but every time you wanted to go back to the tent you had to wait for a bus. It wasn’t too bad, apart from waiting for 30 minutes at about 4 in the morning on the first night.

And then on the final day, when I was trying to leave with other people at about 8am they decided to only take us half way down the hill and we had to walk the rest into the city with all our stuff. That was a definite low point.

If the buses mapped out well for you then you could be in the centre of town in about 20 minutes, great for day time sightseeing, or if you wanted to pick up some cheap booze. But if not, it could take ages. Make sure you’re ready and prepared for the wait.

Like a lot of European festivals Bilbao BBK doesn’t start until 5pm, and then ends at about 5am. It was weird not having the whole day thing that we’re used to in England but that’s the Spanish way. On the plus side you have the day to sleep or sightsee and can get yourself ready for the night.

On the negative, it means you need to take some warm clothes down to the festival site. You might leave in the hot sun at 5pm but by the time the sun goes down at 8/9pm it’ll get cold. Comfort over fashion every time! There were so many toilets at Bilbao BBK. Great for me, I had a VIP ticket and had special friends on the Pringles stand, so I didn’t need to use the public ones much. But when I did, I was impressed by the amount of them and the cleanliness. Up at the campsite I never saw a queue as there were so many.

There were also lots of showers, which is something I feel like British festivals need to work on. There were queues about 5-people deep for these in a morning, nothing compared to the 100+ deep queues I saw that time I went to Latitude Festival. I didn’t actually eat that much at the festival. I had a half tuna pizza which was freshly done in an oven, and delicious, and then an absolutely disgusting chicken and rice concoction. Couldn’t even eat it. Devastated at €7.

I also had some patatas bravas which were delicious after I’d been partying at Muse. The rest of the time I ate from the camp shop – pre packaged pasta salads – or when I went down into Bilbao in the day. There’s no reason to eat at the festival if you don’t want to as you can bring good stuff up so easily. I guess that’s why there wasn’t actually that much to eat there. Compared to other festivals I’ve been to getting a drink at Bilbao BBK was easy. I can’t remember ever queuing for more than three minutes and pretty much everything was €3. Including the Spanish Kalimotxo – red wine mixed with coke, which is surprisingly delicious.

You’ll be frisked on the door as you’re not allowed to bring drink into the main festival site. It is allowed in the camp ground though, and you can buy supplies from the camp shop for a reasonable amount. Again, if you want to keep it super cheap you can bring it up from Bilbao, of course then your beers won’t be cold but that’s up to you.

I’ve never been to a festival with so much free stuff. I had all the Pringles I could ever want, there were Vans Tshirts and bags, Aperol tshirts and sunglasses, ponchos, and snacks given out at every corner. And that’s just with the general ticket.

As I said, I went VIP which meant access to the awesome VIP bar that looked out over the festival. It also meant I had all the Iberico ham and crackers I could want and a few drinks tokens too. There were comfy sofas, fancy toilets and lots of interesting people to talk to, probably famous. Absolute dream. 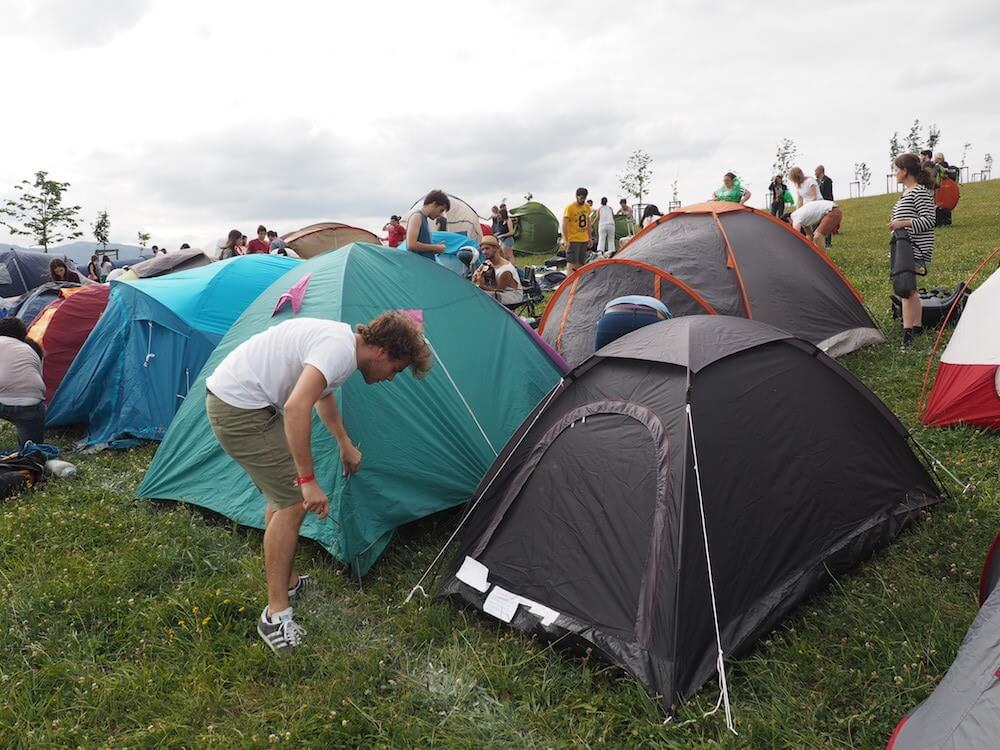 – That little grey thing was my home for three nights

I pitched my tent on the Wednesday and then went back into town to stay at the Akelarre Hostel (a great hostel) for €19 that night. This meant I only camped for three nights but still had a good spot. Despite all the camping and festival advice I give you guys, I’d actually failed to take anything but a tent and a sleeping bag so camping in the bad weather was pretty rough.

I only gained a few extra rows near the entrance by going a day before so I wouldn’t say it was essential. I think most people stayed in the accommodation in the city, but judging by the prices those hostels were raking it in.

The same hostel I paid €19 for was €80 for a bed on the Thursday – make sure you book your Bilbao BBK accommodation early.

The music at Bilbao BBK Live There were two main stages, which would take turns in hosting the acts. This was great because you didn’t miss anyone and it was easy to walk between the two to see them all.

Over the three days I saw Future Islands, Disclosure, Mumford and Sons, Ben Harper and the Innocent Criminals, James Bay and Muse. All were awesome. I’m listening to Future Islands as I type this and remembering the sun out, Aperol Spritz in hand and just loving life. Dressing up at Bilbao BBK Live

In general, people at Bilbao BBK Live didn’t dress up like we do at festivals in the UK. Helen and I were full on glitter and stars all the way, but seemed like the only people. We had people asking us to give them some. 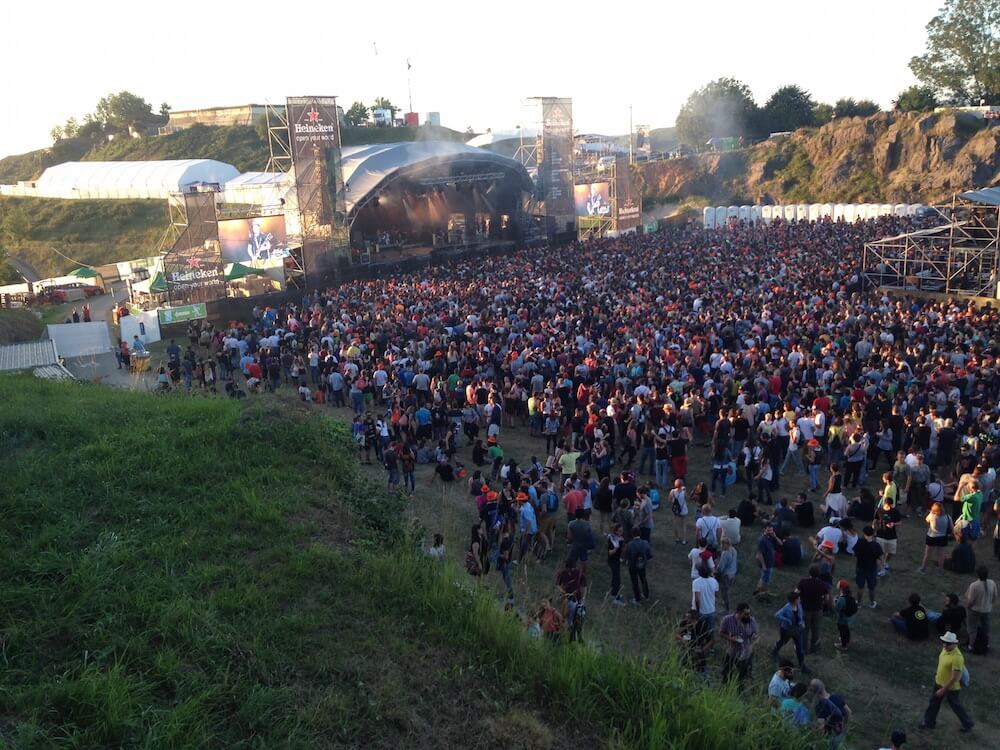 The lowest point of the festival was having my phone stolen. We’d met up with another two of Helen’s friends, taken some selfies at James Bay – a girl asked if she’d like me to take a photo, I said no – and then we were dancing. I think that girl watched me put my phone back in my bag and somehow jostled my bag to get it out again. Oh my god I was SO annoyed.

Amazingly I’d downloaded everything off it the day before and so I only lost the photos of the day, but it was the start of a trip round Europe and not having a phone was just so annoying.

So, yes, be very careful of your stuff. Unfortunately festivals and holidays are prime time for having your stuff stolen.

BBK did have lockers up at the campsite to store my stuff. I had my laptop with me and all my camera and electronics so obviously I didn’t want to carry all that around for the weekend. I ended up paying €30 for a locker for three days, it was worth it to keep all that stuff safe. Although I’m sure a normal person wouldn’t feel the need to bring all those electronics to a festival.

How much will I need for Bilbao BBK?

I don’t know – how much can you drink and eat?! From the BBK Festival camp shop…

From the BBK Live main arena…

If you have any questions about Bilbao BBK Live, just let me know below.

How about checking out La Tomatina, the tomato throwing festival near Valencia?

Is there coo tickets for this year? It is so hard to get a hold of someone from the venue

BBK is quite a small festival so I'd definitely recommend buying beforehand.

Hey James, I don't know how I missed this comment, sorry. I'm a bit late now. I hope you had a good time!

As I'm sure you saw, getting between the stages was easy, and yes, you can show up early, there's plenty to visit beforehand. Or you can just chill out in the arena :)

Great write-up, thanks for sharing Vicky!

Would you recommend showing up early for the concert? How's getting around to the different stages?