Five weeks in Japan and a lifetime of memories – sounds cheesy, but it’s true. I can’t actually believe it was only 35 nights, I did so much and experienced so many new sights, ideas and ways of life in crazy Japan. The memories can get lost in time though, and replaced by new ones on top so I wanted to share a few things from Japan that I definitely don’t want to forget.

In Japan I felt like I never really knew what was happening – if I had any sort of plan it went right out the window. I was always bamboozled when it came to feeding time: where to go, what to choose, how to eat it, the correct etiquette and the right time to pay the bill. There’s no chance of reading a sign, or trying to decipher the language in such a short space of time.

In Japan they’ve turned everything on its head from what I’m used to. The skeleton is the same, but the flesh is completely different.

As well as these contests to the norm, there were a few other things that crazy Japan does differently to the Brits.

1. There are tens of flavours of Kit Kat. I tried apple, chilli and green tea – green tea came out on top in my taste test. 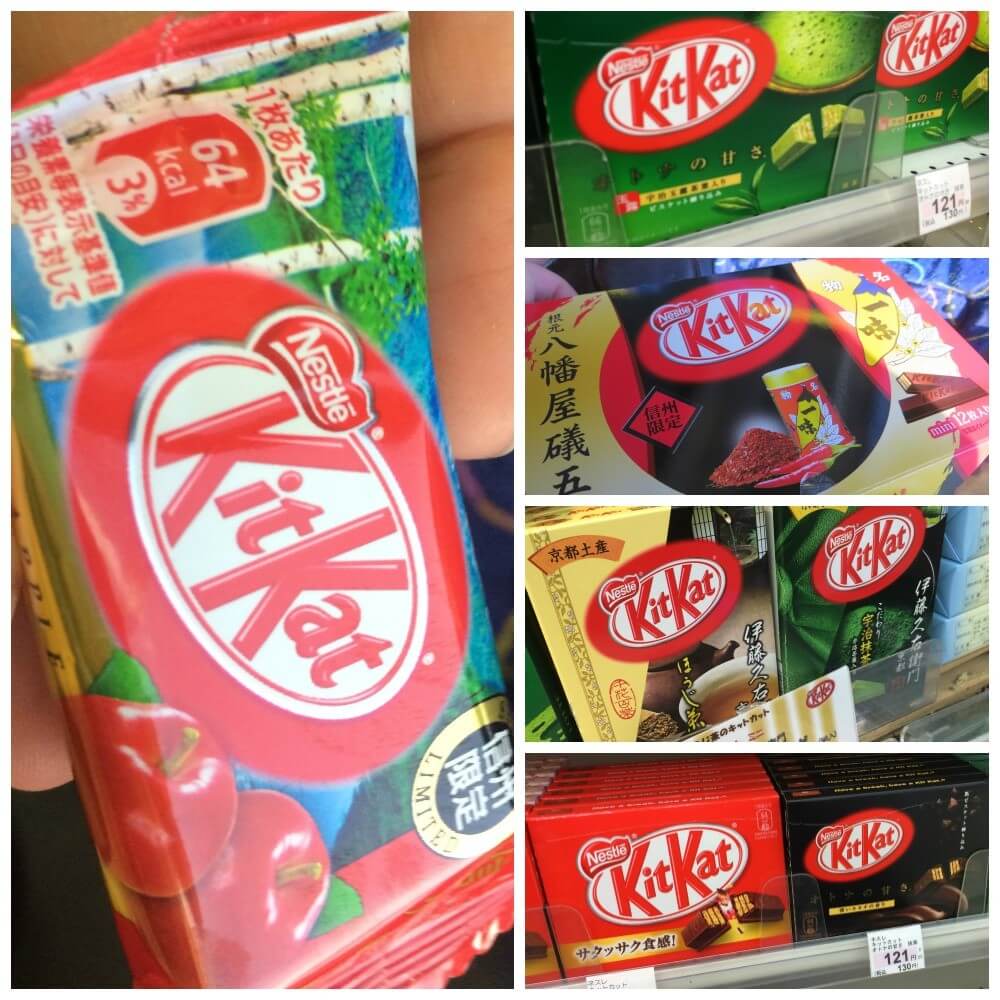 2. Every shop worker gives the receipts earnestly, doe eyed and with two hands, as if it’s the most precious thing they ever did hold, Even when it’s for water in a 7/11.

3. Some supermarket workers read out what every item is as they put through the till.

4. Girls in Sapporo still wear tiny skirts even though it’s -4C and I’m wrapped up to the eyebrows.

5. On the train the conductors bow and tip their uniform hat to the carriage when they come to check your ticket. They do the same again when they leave as if they’re doing some army march.

6. Some buses and trams have a system where you take a ticket when you get on with a number on it. Then there’s a big electronic board at the front of the bus that tells you how much your number has to pay, it goes up as you go further. 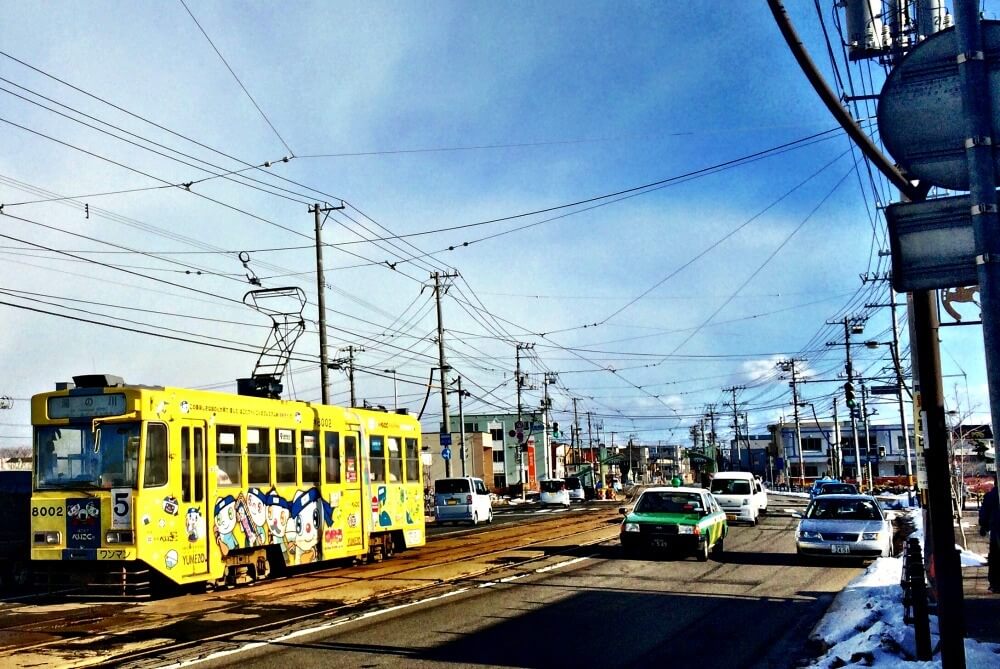 7. You can drink the tap water, everywhere.

8. About 80% of people wear surgical masks (in January anyway) and you’ll see them reach for them to make them tighter on their face if you show any sign of a little cough.

9. In bars and restaurants they give you a basket to put your things in under the table so you don’t have to put your bag on the floor.

10. There’s an aviary in the centre of Sapporo Odori Station with budgies. 11. At some subway stations, including Ryogku in Tokyo, they play birdsong over the loudspeaker.

12. On the subway in Tokyo they have ‘no phone’ areas. In one there was a right old fusspot of a lady who was ensuring everyone stuck to the rule. She booted the guys out for even playing on them silently.

13. You think you know sandwiches – but when it comes with strawberries and cream in it you realise it’s not the same as your average tuna mayo at home.

14. Sumo wrestlers are real, are huge celebrities yet still wander around the supermarkets. 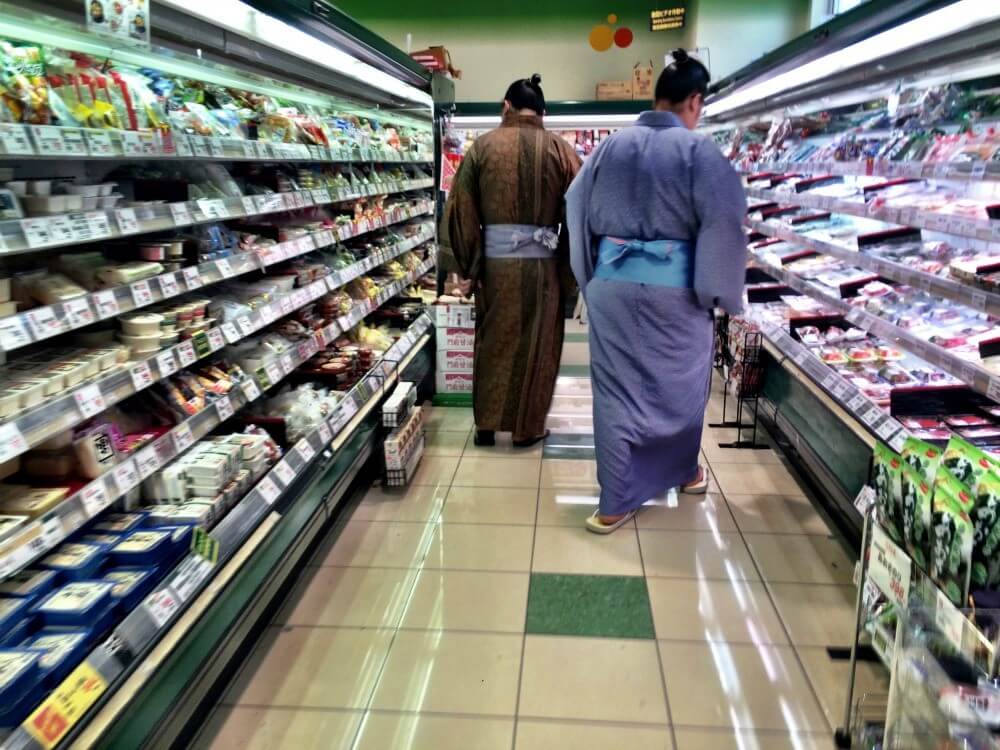 15. You have to take your shoes off everywhere – including certain restaurants and shops. I even saw some business men taking them off on the train.

16. I saw a woman bow down to a lion statue outside an office.

17. The service is so nice, kind and caring, but for this Londoner it’s a lot slower than London. The people in Osaka Starbucks wouldn’t last a minute in Oxford Circus!

19. The Shinkansen trains are fancy, spacious and have everything you could possibly need. They also offer a full on dinner service with bento boxes. 20. In among the usual city buildings it’s normal to see a temple or shrine pagoda sticking out above the skyline.

21. You can get refunds on your train and subway tickets if you buy the wrong one – and they’re nice about it.

22. They have this delicious alcoholic lemon drink called Kirin, that’s 6%. It’s like pop (photo next to the bento box above).

23. In some restaurants you’ll find the menu separated by the kind of part of animal it comes from. I grew particularly fond of the ‘aorta section’. 24. Even the toilets on top of the ski mountains had heated seats.

25. In shops the tills dispense the correct change rather than the shop assistant having to count it out.

27. The scenery on some of the train routes is absolutely incredible and make the Japan JR Pass worth the money tenfold. 28. Some restaurants have buzzers on the table so you can summon the waiting staff when you want them.

29. They love their dogs. I saw a cake shop for dogs, and a beauty salon and hotel for them too. Wtf?!

30. You’re always welcomed in an eatery with a glass of water and green tea.

31. Some towns in Hokkaido, like Hakodate, have foot baths in the centre to make use of the hot springs while you shop. 32. No one blinks an eyelid at the anime buses and trams that decorate the cities. No local anyway – the tourists are all happy snapping away.

33. All restaurants are covered in pictures of food, and with plastic replicas. I don’t know how I’ll possibly ever order anything again without a photo.

34. Japanese people will go out of their way to show you the way if you ask for directions. Once had two little old ladies walk about a mile with me to show me the station, felt well guilty but they were gossiping away to each other the whole route. Think they enjoyed it.

35. I gave up my seat for an old dear on the Tokyo subway and then another old dear gave me a present and kept bowing to me for doing so. She looked so proud of me.

36. All the cleaning staff for the Shinkansen trains have this awesome pink uniform. 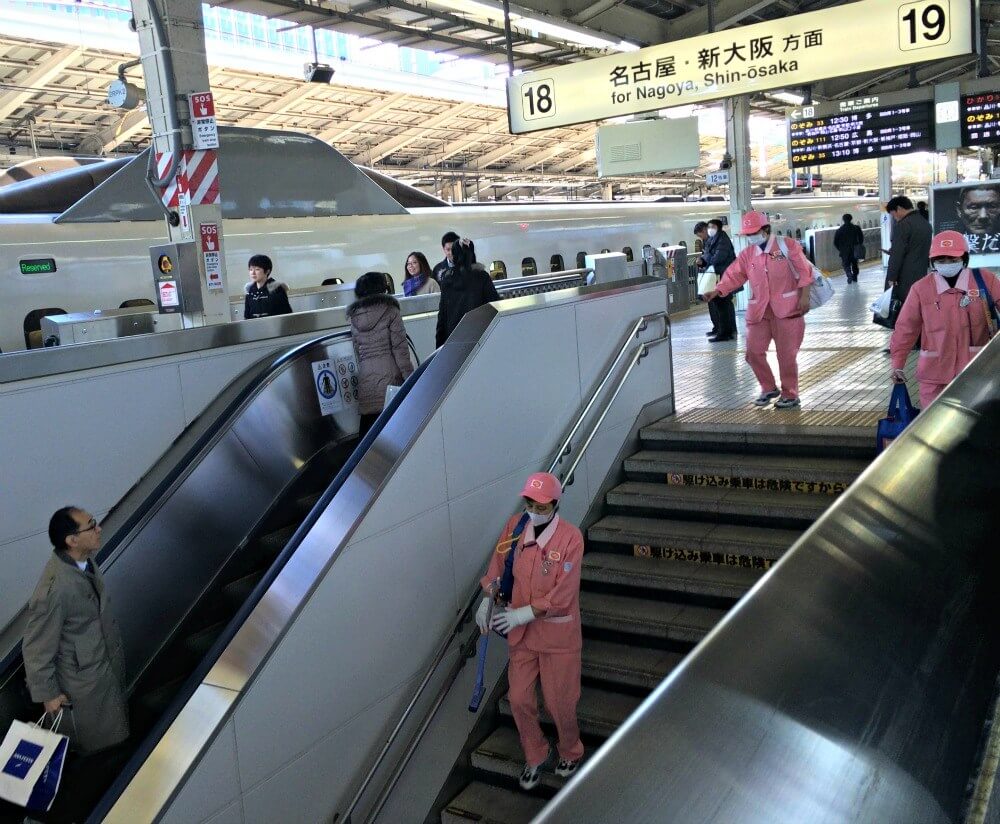 37. When you go in a shop with an umbrella they give you a special umbrella bag to keep it in.

38. When you try on clothes in shops they give you a bag to go over you head to protect their clothes.

40. Coloured contact lenses are a huge thing here as teenage girls want to look like anime characters and choose ones specially made to make their eyes look bigger. 41. I also saw a girl on the tube gluing her eyelids back with some weird white substance. I asked someone in the know and they said it’s just another way of making the balls looks bigger. Yikes.

42. Schoolgirls do actually wear socks pulled up to their knees and tiny skirts, whatever the weather.

43. You can go days with just eating from vending machines – they have everything!

44. Japan is definitely not all healthy sushi. They’re obsessed with cakes, pancakes and frying everything. Not somewhere to go if you’re on a diet. I had an elk burger that was served in a pancake once – true story, here’s the photo to prove it. 46. You get given pyjamas at the hotels – but I didn’t try them. More regret.

47. In restaurants the staff screech at you with “irasshaimaseeeeeee” to welcome you, and then again to say goodbye. Makes you feel kind of special, y’know?

Which Japanese quirk makes you want to visit?

Hmm, you could be right there! At least for some people anyway. Definitely a city that likes to drink.

Amazing list of things to keep in mind for when I finally visit Japan - hopefully soon. Crazy that the girls wear miniskirts still in winter time!

I've worked in Japan twice so I'm always interested in other perspectives about the Japan. You mentioned some things about buses I had forgotten about.

Wow!! Love this! You're a well mannered young lady!! Xx

Ha, thank you Kellie :) I was bought up well and met some nice people along the way.

Brilliant observation!!! Think my biggest memories from Japan were seeing people out in the town in their yakata. I loved the concept, but never managed to venture beyond the onsen with one on. Blessing a new car in the temple was also interesting. My hubby's favourite from the trip was the beer vending machines and the delight at trying to find the machine with the biggest can and seeing if the noise as it arrived was different to a smaller can from the same machine - hours of endless observation and drinking.

Ah yeah, I forgot about the yakata. I'm sure lots of other things will come into mind as I remember my trip. Japan just feels like a different land. I loved it! And I'll need to go back to play the beer game...