I love a festival, as you know, but there are some that I wouldn’t even dream of going to, in fact, they sound like a nightmare.

Of course us festival lovers are willing to sacrifice something for our passion but usually it’s a few hundred quid, comfort and a proper toilet, not a life.

From baby iguanas to innocent bulls, several festivals across the world brutally maim and kill some of our four-legged friends, all in the name of celebration. So be warned, this list of the world’s cruellest festivals requires a strong stomach or a heart of stone… La Fiesta de San Fermin lasts nine days every July with fireworks and carnivals taking place most days, but it’s the bull run, aka Le Encierro, that causes the controversy. Beginning at 8am on day one, six bulls stampede through the city of Pamplona while up to 3000, often pissed, people race alongside. Since 1924 15 people have died on this morning run.

However, it’s the bulls that are the real victims here. They’re hit with electric prods and given laxatives to weaken them before they run. Many don’t survive because of how rough the runners treat the. If they do manage to cross the finish line then they are sure to die at the evening’s bullfight. RIP toros.

I was in Bilbao and San Sebastian recently, during the Pamplona run just an hour’s train journey away. A lot of the people I’d met had come from the festival and at least three told me they were “glad they made it out alive”. Every one of them showed me footage on their camera phones of distressed bulls and people rolling around on the floor after the said distressed bull had tossed them around on their horns. One of them even had a blood stained tshirt on. There is no way that I’d support the Pamplona Bull Festival, no matter what tradition it upholds. Every 5th November, local Nepalese villages celebrate the Hindu Goddess of Power by offering animals up to be slaughtered. Over two days more than 200,000 buffalo, goats and pigs have their throats cut, with the general ethos being ‘the slower and more painful the death the better’. Buffalo get an extra dose of barbarity when local men cut off their hind legs and remove the heads with swords. Tough guys, hey? 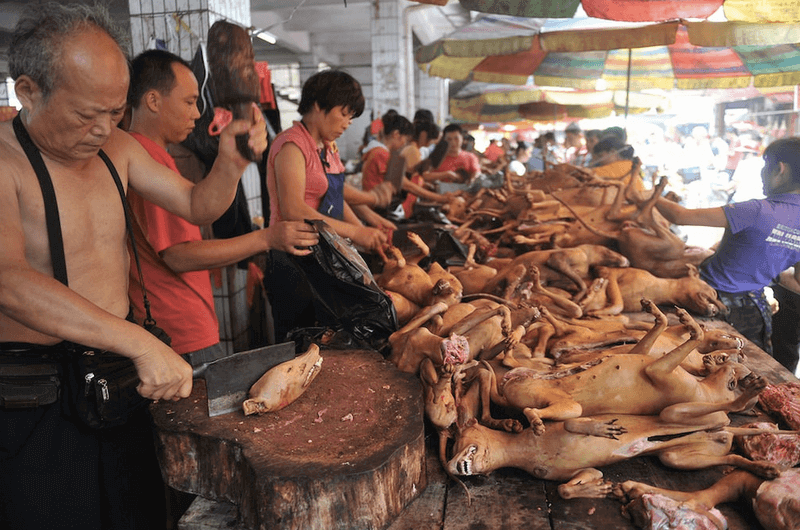 To mark the summer solstice, it’s local tradition in the Chinese town of Yulin to eat dog meat. According to ancient lore, the meat wards off winter colds and brings good luck. Many townspeople buy into this belief and so, come June, it’s diced veggies and stoves at the ready as over 10,000 dogs are killed and cooked up. Despite yearly photographic evidence, officials of the town are adamant such a festival does not exist.

I read quite a bit about this one this year as it was high up in the media. If reports are believed then around the time of the festival, 1000s of pet dogs in the area go missing, never to be seen again. Piñatas are a hot favourite at kiddies birthday parties around the world – the anticipation for your turn to bash the donkey, the hope that the sweets will fall and the celebration when they do. Well, the festival of Kots Kaal Pato in Yucatan loves a piñata so much that once a year the whole town gathers to take part.

Locals throw on their finest and queue to have a bash at the party piñata. This version has a slightly sinister twist though – instead of waiting for sweets to drop, you can expect a pick and mix of half dead iguanas and the local endangered marsupial, the opossum.

Any small animals that have survived the beating are swiftly stamped on for good measure once they fall. As if that wasn’t gruesome enough, instead of settling for a nice game of musical chairs afterwards, the revellers upgrade to goose murder. Those still in the competitive spirit can compete to jump and rip off the head of the goose. It seems Pamplona isn’t the only Spanish town partial to a bit of animal cruelty. To honour St Vincent de Paul, patron saint of the town of Manganeses de la Polvorosa, once a year a young man must find a goat and present it to the church. The guy then tosses the goat from the top in the hope that villagers below will catch the poor thing. This is said to originate from when Saint Vincent himself had a goat that accidentally fell from the church and was saved by locals.

Although the idea is that the goat lands safely, the festival has been banned because of its cruel nature. The town however, seems to have missed the memo because each January they can’t resist tossing that goat to the ground. While the Spanish bulls are being beaten and tortured in Pamplona, their brothers in Mexico aren’t having a much better time of it either. Each February in Tlacotalpan, Veracruz State, locals celebrate the Virgin of Candelaria by force feeding bulls with alcohol. Like some twisted murder plot from CSI, the intoxicated bulls are then dragged across a river only for crowds to finish them off with a beating and stabbing session.

Festival of the Ox, Brazil Legend has it that long ago a pregnant lady had a strong craving, not for strawberry ice-cream or M and Ms, but for ox tongue. Her doting husband, who seriously needs to learn to say no, killed an ox to get his wife the tongue but, once the farm owner found out, he sentenced the husband to death.

However, later, by some miracle, the dead ox did a Jesus on them and came back to life. The husband was then pardoned and everyone lived happily ever after. The end.

Despite this happy ending, locals insist on brutally killing an ox each in the hopes of a re-enactment. They chase it, beat it then rub its eyes with hot peppers and gouge them out. As if this wasn’t enough they go on to break the oxen’s legs, snap and hack off the tail. Some are even doused in petrol and set on fire.

No oxen have yet to rise from the dead, but the brutality continues. Yikes. It’s a brutal world we live in in the name of entertainment right?

There’s no way I’d go to or support any of these festivals in any way. Maybe in the olden days they needed something to pass the time, but c’mon, it’s time to move on from brutally taking lives from helpless creatures in the name of performance.

Powerful piece Vicky, but not before considering that I too am implicated with the 7 billion carnists that abet the slaughter of 200 million land animals daily, to appease our choice of food that eventually leads to our obesity, Alzheimer’s, cardiac events, and everything in between.

What about bakra eid? Millions of goat get chopped

Good article, Vicky. It seems tossing the goat does not happen since 2002. They celebrate the local 'fiestas' every year, but they don't toss the goat any more, thankfully! At least that's what the local authorities say on their website.

I am appalled and disgusted by other traditions as well, such as killing whales in the Faroe Islands and Japan's Dolphin slaughter in Taiji. And being a Spaniard I am totally against bullfighting. Still I don't get why so many people (and so many foreigners) come to Pamplona year after year...

Ah, ok. I think there have been some cases of people still doing it, but in secret. I don't know, I guess it depends who you believe! I reckon within the next 5 years they're going to have to cancel all these killing festivals – there's no way they can carry on. Especially with the uproar about Cecil the Lion recently, and other similar cases. I'm also confused!

Loved this post Vicky. I hadn't even heard about most of these and didn't realise just how cruel - let alone dangerous - the bull running could be. Good call opting for BBK over that!

Yeah, it's brutal! Look up the videos on YouTube – grim!

Thanks so much for letting people know about these horrific and senseless acts of cruelty. I get so disgusted when I hear - "Well, it's a tradition and that's just the way it is." I voice my disapproval my letting people know what truly goes on, as you are doing, so they can't claim ignorance and then simply by not visiting either the villages where they take place or the countries. Thus, not spending any of my travel dollars where they insist on continuing these practices. But, I make sure to let their tourism bureaus know exactly why I'm not visiting and will not until the cruelty stops Thanks again.

Yeah people seem to use 'it's tradition' to hide a multitude of things. As I read more about these festivals I couldn't believe they're actually allowed to go on.