One of the benefits of my job I like the most is that I get to meet so many interesting, entrepreneurial people who are choosing how, why and when they live their lives.

These aren’t just the people at the conferences I go to, like the DNX Digital Nomad Exchange a few weeks ago, but also the people I meet while I travel.

This last week I’ve been in the Adirondacks in New York where I’ve met a whole range of people who’ve made their passion their life and their income. Dan Vesco, who runs Vesco Ridge Vineyard with his wife Nancy, told me how his love of wine making started with a kit he was given 7 years ago.

His passion, and popularity, kept getting bigger until he moved from shed to granny flat to what we saw at our tasting – a stunning, purpose built winery.

Now he has his own vineyard and tasting room catering for the fast developing palattes of the Chazy locals every week. You can bring a picnic and soak up the atmosphere with a tasting session, or just bring a spoon and get yourself some of the wine ice cream, with some wine jelly on the side.

The vineyard has since won golds and silvers at the Finger Lakes International Wine Competition, out of hundreds of entries. Dan and Nancy are part of a group of vineyards changing the face of wine in the Adirondacks and how the area is thought of in regards to wine production. Unfortunately, just after the photo above was taken it started chucking it down with rain, but at least that meant less time walking round the vineyard and more time in the tasting room. I made my way through 8 different wines as he explained the grape, origin and cultivation process of each.

They now have ‘Bark and Wine’ events (bring your dog), ‘Yoga and Wine’ (my dream) and paint a wine glass parties too. According to Dan, all it takes is a few glasses of wine for the artist in you to come out. Next time I’m in the hood I’m signing up. Mark from Raquette River Brewing had a similar story. He’d just started brewing up in his shed for fun. Things escalated quickly and now he has a popular micro brewery in Tupper Lake with 8 beers on tap and more to come. 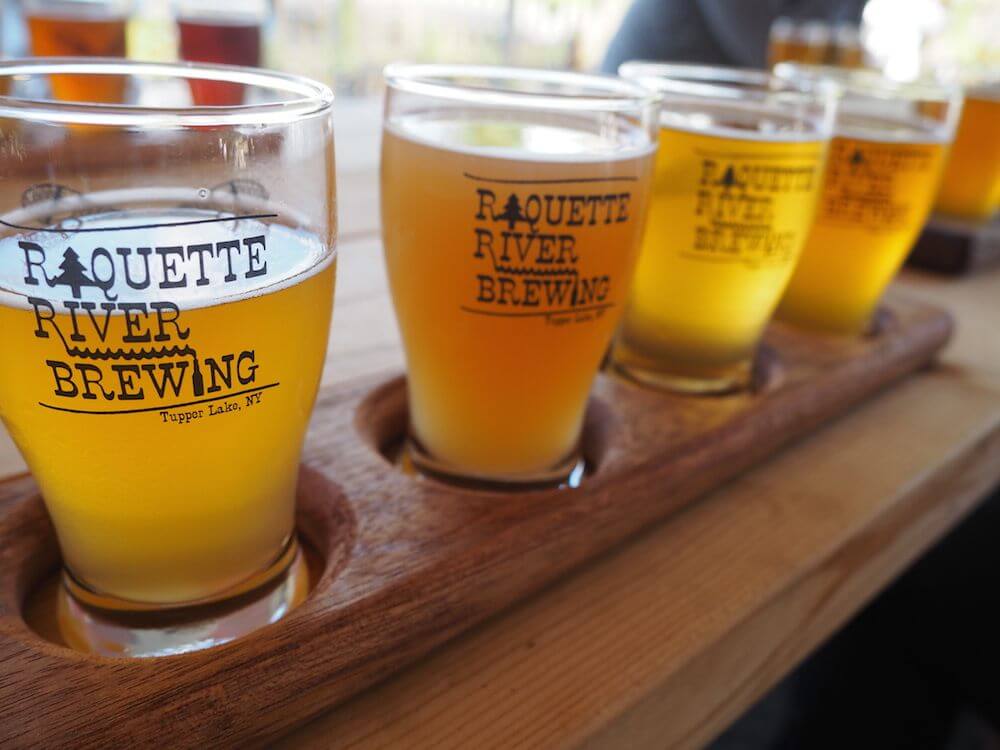 This is definitely the location of some of the more interesting beer flavours I’ve ever heard of. I had a flight of 5 to try – the most possible in the time we had. It was only $5, couldn’t believe it. I tried:

And then went back for seconds of the Orange Coriander. As I was inside waiting for our party of 10 to get their flights, locals were bringing in bottles to be filled to take home. The beer is hand crafted in small batches and served fresh – why, why would you want a big brand beer when you have this on your doorstep? 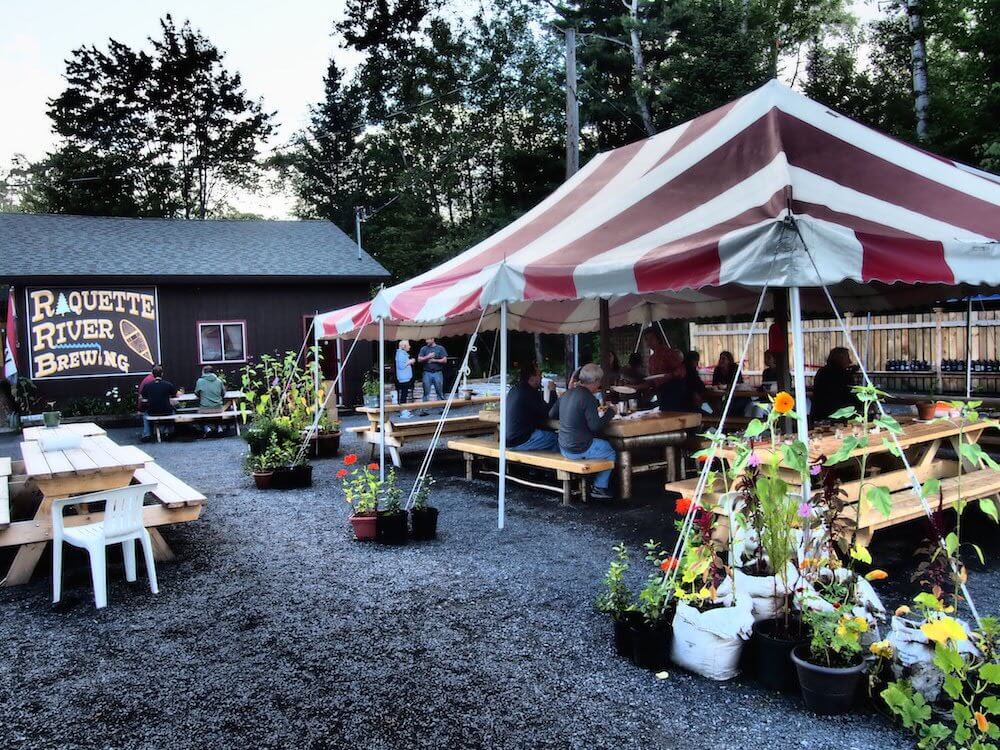 Holly Pelland’s husband used to joke that when he retired, it was time for her to work. Apparently he doesn’t remember this, but she’s found her calling with an upholstery business, a kayak and bike rental business and by purchasing her own private plot of land. Boomerang Island in the Thousand Islands Park is all hers. She noticed that as more people were visiting the Thousand Island Park a few years ago they were asking for somewhere to rent bikes and kayaks, and so with a few shrewd investments that business was set up. As a skilled upholsterer she started making covers for the equipment and waterproof cool bags to bring the food out in. As more locals saw her work they wanted a waterproof cover for this boat, and another one for that jet ski and so that business was borne too.

Somewhere along the way she bought Boomerang Island – so named thanks to the shape – and became a fully fledged island owner. It’s a small island, and restrictions say you can’t build on it, but for outdoors-loving Holly, that’s fine.

Now she wakes up early to bake scones and cookies, which she brings out to her own island in her self made cool bags by kayaking with her clients across the mile of water separating it from the mainland.

We enjoyed the scones, cookies and juice in the mini marquee on her jetty. She told us about the parties she has on her own island, how she kayaks out to drink coffee in her own wilderness every morning and the plans she has for the future of the jetty and the business. Just a quick final one, from the many Adirondacks entrepreneurs I met, is Bill Smith. Originally from the Adirondacks, he tours the east coast to tell his stories of ‘the olden days’ to eager crowds at festivals and events. Born in 1937 Bill has had many a trade, including a trapper and fur buyer, a pulpwood cutter, and a hunting and fishing guide. He was the youngest of 10 children and is full of tales of what it was like growing up through the times.

He’s a bit of a legend round the Adirondacks and has made a career for himself with his unique entertainment, stories and songs. He totally wowed me with a ten-minute version of Cinderella told entirely in spoonerisms.

He travels out to private events at hotels and cruise ships and when I went to help him take his stuff to the car – he also sells handmade walking sticks – his beloved wife was in the passenger seat giving us a cheery wave. That’s love.

Entrepreneurialism in the Adirondacks 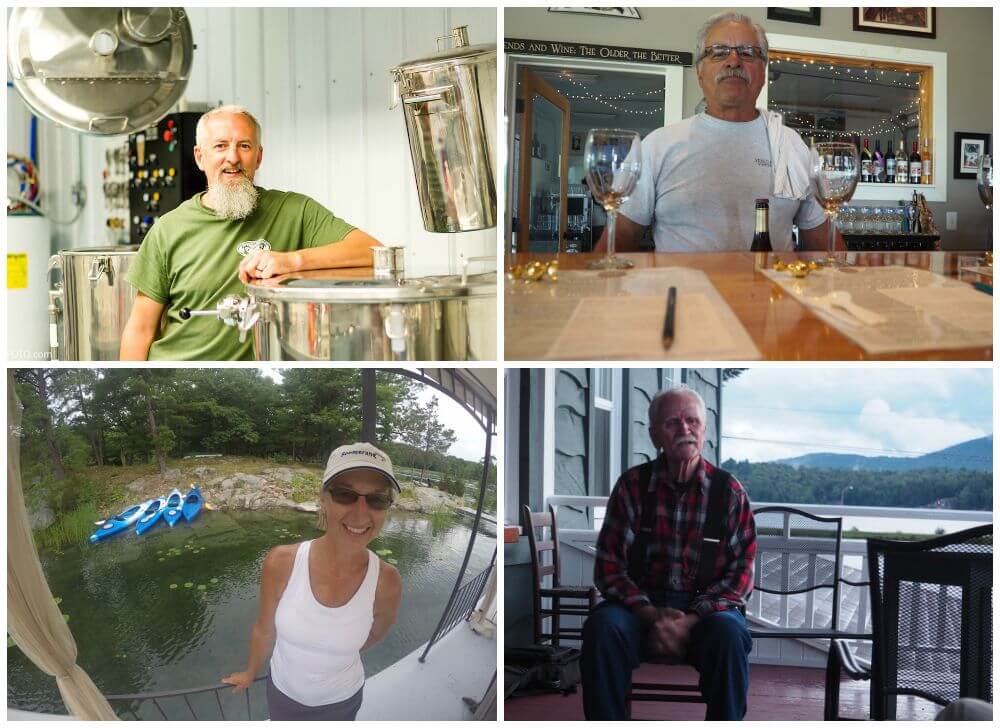 Dan, John, Holly and Bill had all had careers before, they were all a few years older than me, and they’ve all nurtured their passions to become their income. It was never their plan from the beginning to have become as big as they have, but a little opportunistic business sense every day, mixed with a hardy passion, has led to them living the awesome lives they are today.

Now they all have burgeoning businesses within their neighbourhoods that help to attract tourism in the area and to be part of what brings the local community together. That’s inspiration aplenty for me!

I was a guest of ROOST ADK in the Adirondacks – you can find out more about the trip, and see the rest of my coverage at eplny.com/vickyflipflop.