21 Tips to Survive Your First Time at Coachella

The best thing you can do to ensure your first time at Coachella  goes smoothly is to be prepared. As a Coachella festival veteran (Well I went last year) I’m here to show you exactly how you can be as prepared as possible so all you need to focus on is which stage your favourite band are playing, Coachella fashion and making sure you’ve enough stamina to go for it all day and night. 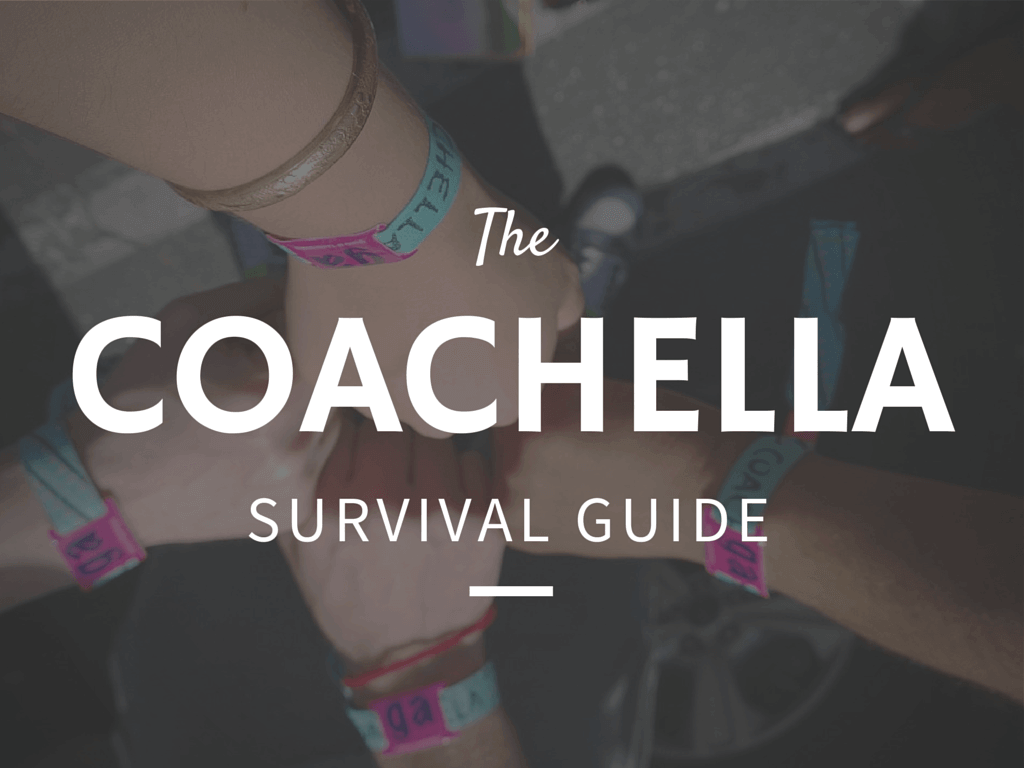 1. Get there on Thursday morning

We arrived at about 11am on Thursday which in hindsight was perfect. We were close enough to the arena gates to be able to go back to our tents for a drink and far enough away to not be too close to all the people who were staying in hotels nearby and staggered around the entrance after the chucked everyone out.

2. Take all the food you think you’ll need

Here’s a list of all the food we bought from Walmart beforehand to give you an idea of what to take. Of course there are loads of stalls around the festival, but only serving the usual burritos, pizzas, burgers and other delicious yet fatty foods. You will not feel good if you stick with this all weekend.

3. Fill your boot / trunk with drink

One of the best things about Coachella Festival is that you actually camp with your car. This means you can absolutely pack your car with booze and food. Be aware though that you’re not allowed to take glass into the festival grounds though, you need to decant it all. My Coachella Drinking Guide will be coming next week too, for more on what you can and can’t do at Coachella. The fact we had so much alcohol meant we could give it away to our neighbours no bother – a great bonding tool.

4. Make friends with your neighbours You’re going to be living next to each other for the next few days and in Coachella, that’s a lifetime. You can help each other out, look out for each other and have fun. We made friends with ours on the first day after they leant us some tarpaulin, and the ones over the way thanks to borrowing their air pump. The guys on the other side weren’t quite so friendly, especially when they were blasting their truck engine to sit in the air con while the exhaust pumped into our camp. They did turn it off after we asked them nicely, well, 10 minutes later.

5. Be generous and kind

The Coachella spirit is one of the best things about the festival and you need to be a part of it. One girl we met gave us some of her dad’s birthday cake, we gave out drinks and as I’ve said our neighbour gave us tarpaulin. There’s no place for selfish douchebags at Coachella – share the love man.

READ MORE: 12 Things You HAVE to Do at Coachella You need to take in everything you’re going to need as there’s nothing to buy once you’re in there. It’s not like an English festival where you can buy a premium price tent in the grounds. I’ve written a Walmart packing list (on its way) and a Coachella clothes packing list to make sure you’ve got it all covered.

As there’s no shopping at Coachella, you need to plan all your outfits for that ‘Coachella’ look, or whatever style it is you’re going for.

8. Pick up a copy of the Coachella magazine

Look out for the Coachella magazine landing in front of your car so you can catch up with the Coachella goings on, including the celebs and parties you probably missed as a first timer, and about the day ahead. The car in front of us going through security got absolutely ripped apart because it looked like they’d found some drugs in the guy’s bass speakers in the back. They’d pulled out his whole sound system. He seemed to be taking it very well, but I’m sure it wasn’t ideal. There are coppers everywhere too – and drugs abroad are never a good idea.

The showers are clean, plentiful and an absolute must at least once a day to escape from the heat of the Coachella Festival desert. I’ve never taken as many showers at a festival as I did at Coachella. In fact, I’d actually never taken a shower at a festival before. Haha. There’s no need to rush around at Coachella. The site isn’t actually that big, not compared to the likes of Sziget Festival in Budapest and Glastonbury anyway. There are plenty of chill out spots too, so make the most of them.

12. Don’t take your own alcohol into the arena

It would be horrifying to get thrown out of Coachella just for smuggling some drink in, especially if you’re camping. And especially if you’re coming from abroad. You will be searched at the gate. You can just drink at your tent and then wander in as you please. If you fancy taking a chance, check out my How to Smuggle Alcohol into Festivals guide.

When I say that what I mean is don’t let the security see you too drunk. While it might be fine to roll around the floor wondering where your life has gone at the likes of Leeds Festival in England, that behaviour will get you kicked out at Coachella. Think of it like the Stepford Wife of festivals – as long as it all looks ok on the outside, it doesn’t matter what murky underground you get involved in.

There are plenty of water stations at Coachella, so make sure you use them. It’s easy to get dehydrated when you’re drinking alcohol, dancing and in the desert heat all day. The price of water is capped in the arena but on the campsite it costs a fortune so make sure you get it before. Sweet, delicious H20, get it down you. 15. Look out for the ‘Coachella’ stickers

In your Coachella wristband box you’ll get a kit to make some decorations for your car. We actually only got as far as putting the sticker on the boot though. As you drive into Coachella it’s fun to pick out all the people going to the festival and give them a wave. If you get stuck in traffic make friends! You may end up camping near them, or seeing them at the festival. More friends = more fun.

If you’re there by yourself be careful who you trust and don’t be a dick by getting too drunk. The festival is awesome, relaxed and full of really good people but don’t be lulled into a false sense of security and keep at least some wits about you.

17. Have a meeting point 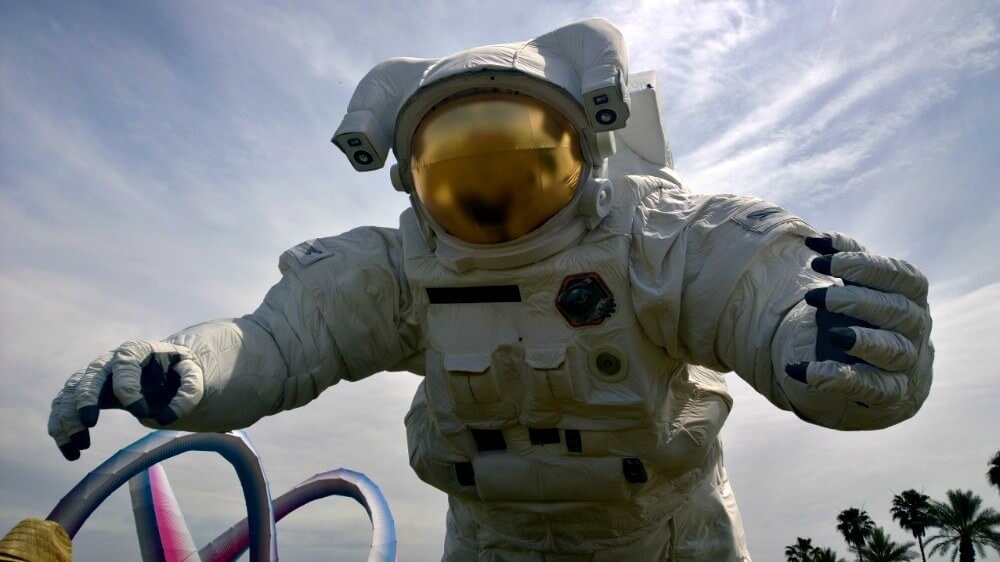 There is Wi-Fi for us internationals but it’s a good idea to pick a point where you’ll all meet at a certain time if you lose each other. Be careful about choosing the spaceman though – he moves!

I fell asleep as soon as my head hit the pillow every night – thanks to the time I actually got to bed and too much alcohol and dancing – but I’d suggest getting everything you can to ensure you’ve got a comfy bed. Take your earphones or some earplugs – Coachella is the festival that never sleeps…

Remember you’re in a desert so it can be pretty cold at night. You’ll at least need a hoody.

There are so many measures to make sure that under 21s don’t have access to alcohol so if I was you I’d just accept it and deal. Although I definitely wouldn’t be saying that if I was under 21. Ahh the benefits of getting older hey?

There must’ve been ATMs but I never needed to use it as I took plenty of dollar. You can store it in your car so there’s no worries about losing it. Queueing for an ATM is the most pointless use of time at a festival ever. And you won’t want to waste any of it at Coachella!

Hope these tips help you to have an amazing Coachella like I did.
Let me know how you get on! 5 Weeks in Japan Trip Round Up
← Previous
How to Deal With the Heat at Coachella in 10 Steps
Next →
Click here to cancel reply.

the pandemic has done away with festivals of any kind..it’ll never be the same..

So sad isn't it? So upsetting when you think of this huge part of our culture gone.

Heather Adams @ Not Quite Wild

Awesome tips, thanks Vicky! I always forget to take a jacket to a music festival. I'm always freeeeezing by the time I reach my tent.

Oh gawd, my number one priority from a festival is to be warm. I take all kinds of jumpers and coats and layers to make sure I am. I've had way too many freezing cold festival experiences.