Things to Do in Williamsburg

The only reason I knew about Williamsburg was thanks to The HBO show Girls. If you haven’t seen it, the whole three series are based on Hannah and her friends’ lives in the Brooklyn suburb. It’s like the modern Sex and the City. I love it.

I actually did a Google-search guided tour around Williamsburg, taking a ‘casual’ photo in every spot. Not a geek. If you’re familiar with London, Williamsburg is kind of like Shoreditch, but so much better. For starts, it’s actually cool, not just pretentious people trying to be. It’s also a lot quieter and more relaxed, and you didn’t have to queue for hours to get in anywhere.

Most of the action centres around Metropolitan Avenue and Bedford Avenue.

After three crazy days and nights in Manhattan, which had followed a week of partying in San Francisco and Coachella, we were definitely ready to chill out in the Williamsburg coffee shops.

I have never drank so much coffee in my life as I did in Williamsburg.

There were so many to choose from. Can’t find any exact stats but I’d say there were at least two on every street. This was my favourite… 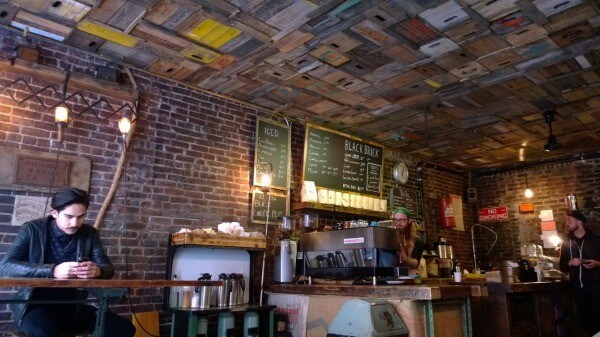 In the coffee bars everyone is either on their laptops or passionately discussing their latest greatest creative project. They were brilliant places for eavesdropping, using the Wi-Fi and people watching. Definitely the perfect places to write my forthcoming novel, when I start.

Shopping in Wiliamsburg was great fun. Urban Outfitters have recently moved in, next to American Apparel (I will never understand that shop) but when we went in for a wander there was no one in those shops. Too commercial. Williamsburg is all about goodwill shops – hipsters love a rummage. We already thought Williamsburg was awesome and then when we found the shops of Union Street on our last day we actually had to get more money out to keep up with how much cool stuff there was. Down by the river is a cool market filled with local handcrafted goods. I bought myself a ring here, which I have now lost. I am a liability.

There’s also a big market by the sports centre on the weekend that’s kind of a big deal, unfortunately we just missed it.

The new and huge Rough Trade shop in Williamsburg looks awesome. I spent some time in there listening to the records, and could see from the advertising they did live gigs in there. Upcoming when I went in April were Tori Amos and Little Dragon. Amazing. If you tire of the trendy shops around Bedford Avenue, make your way to Green Point where you’ll find discount stores a plenty.

We met up with W.’s friend Greg, a local who took us to the Wythe Hotel where we were sat next to Dan Humphries from Gossip Girl, exciting. I’d definitely recommend it here and apparently they have a roof terrace that we didn’t manage to climb unfortunately. I had the chicken sandwich here, and although the fries were delicious I wouldn’t recommend the chicken. W. would strongly disagree. Go for the sausage dish instead. Rosamunde, now they know how to serve a sausage. We visited for the late night happy hour at midnight ish and got a hot dog and chilli fries to share. I’ve never seen such a comprehensive sausage menu, I was pleased. There’s a dirty bar vibe in there thanks to the cool clientele, and the bar staff with happily rustle up a beer for $2. We also ate at The Bagelsmith on Bedford Avenue for breakfast. I made a bad choice with a salted bagel, totally forgetting everything was bigger in the USA and nearly vommed at the huge flakes of salt I ingested. Avoid.

Finally, my favourite food in Williamsburg came from Lodge on Grand Street. I had this… and only managed half of it. Delicious though! 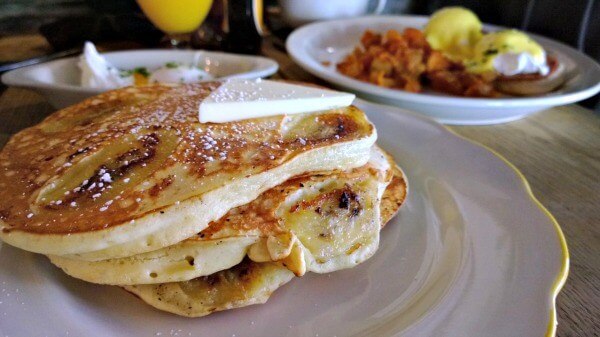 Oh and check out the Roebling Tea Room too. It’s not actually a tea room, but a super cool bar serving big, fat, top quality, juicy burgers. This was our final meal in the USA and a great way to bow out.

If you’re looking for a bit of adventure to burn off the caffeine and pancakes take a stroll across the Williamsburg Bridge. It’s only a mile or so and you’ll get incredible views over Brooklyn and Manhattan. There’s a specific lane for walkers so it’s safe too.

Walk down to the waterfront to get your photo taken against the Manhattan skyline as a backdrop. You could picnic down here or take a book to read. I even saw a few people with their laptops too. In McCarren Park we saw some serious baseball games going on in the enclosure, and a few less serious ones in the main park.

Just walk around – Williamsburg and its people are fascinating.

We stayed in Rio’s apartment by Marcy Avenue subway station. We had a roof terrace, lounge area, comfy bed and bathroom to call home for the three nights. There were some weird clunking sounds in the apartment in the mornings, which were really annoying, but the awesomeness of the apartment definitely made up for it. Vegas’ Stratosphere Hotel: Would You Ride a Rollercoaster on Top of a Skyscraper?
Packing List for Coachella

Day Trip from Vancouver to Victoria by Catamaran & Seaplane

The Story of My 5 Days in New York at Christmas

I Was Picked Up By a Cop in Memphis