The Story of My 5 Days in New York at Christmas

I’m just back from 5 days in New York. Guys, it was awesome. I’ll admit, it wasn’t the dreamy ‘Christmas in New York’ experience I Imagined. I didn’t manage to meet Santa in Macy’s like on Miracle on 34th Street, I didn’t sing carols in the street a la Elf, and I definitely didn’t go ice skating in Central Park, as in Home Alone.

Nope, turns out those cliche New York Christmassy experiences are kind of exaggerated in the movies.

For starters, it was freezing 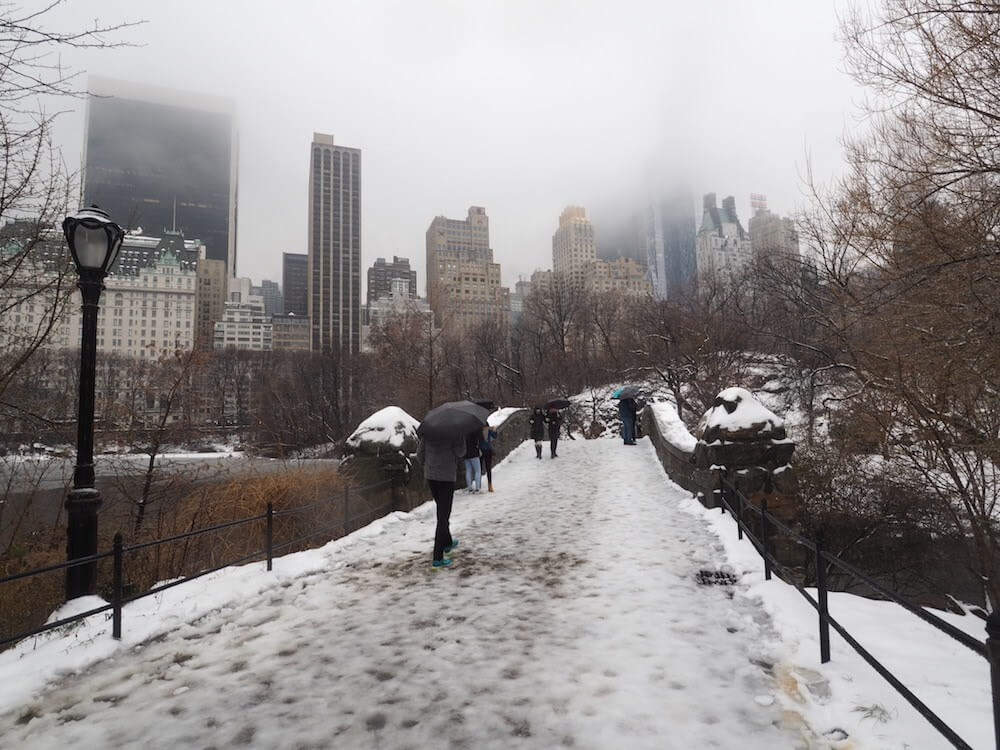 Literally. One day it was -8C and the wind made it feel even worse. Is it bad that I wore pretty much the same thing every day I was there? Two pairs of tights, socks, jeans, a vest top, a t shirt, a long sleeved top, a jumper, a coat, a scarf, hat and gloves. Layered up AF. And still, the top part of my cheeks (on my face) felt like they were being stabbed by icicles as I walked from sight to sight. 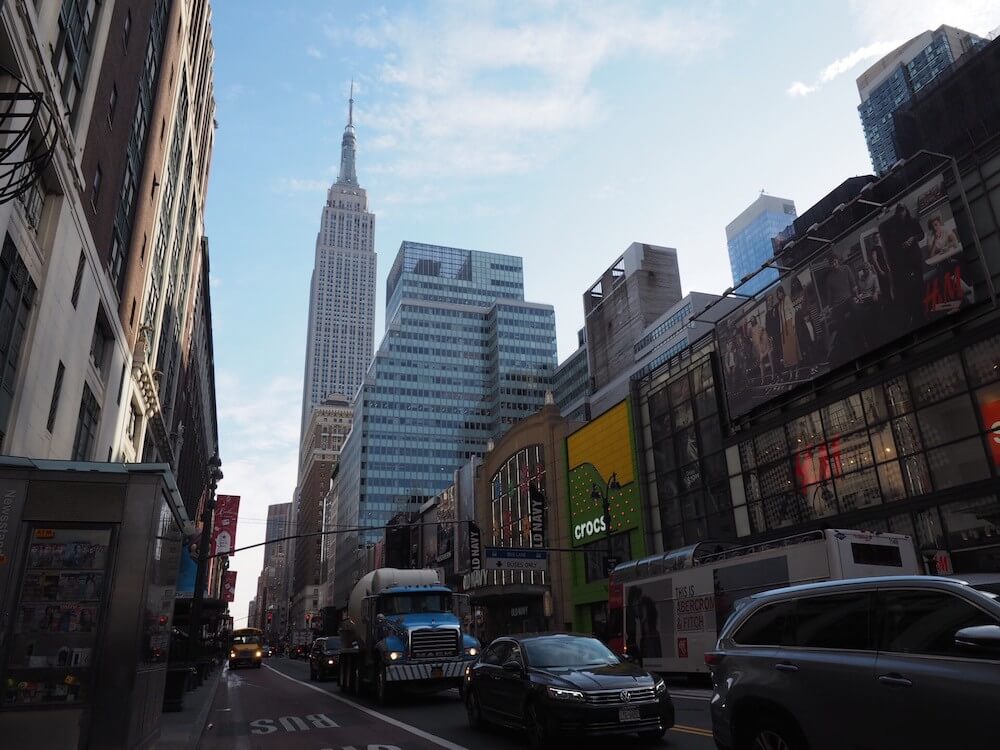 The first day wasn’t like this. Oh no, I didn’t realise how lucky I was as I strolled up to the Rockefeller Tree, to the bottom of the Chrysler Building and to get that view of the Empire State Building. I’m lucky enough to say I’ve been up twice before, so to save myself the $56 entrance fee, I admired from below.

For free entertainment, I walked the Brooklyn Bridge, enjoying the views of the New York skyline and the Statue of Liberty as I went. I also went to the New York Public Library, which looked just like something from Harry Potter. By day five, I feared for my fingertips. My phone kept turning itself off thanks to the cold (yeah, cheers for that, Apple). It snowed, it iced and it turned to slush.

Before it did though, I got to see Central Park in the snow. Treat. I headed straight there as soon as I saw the ten inches of snow on waking up. I wanted to photography those famous wintery scenes with the skyscrapers in the background. I layered up, ventured out, and had to seek warmth ten minutes later when no matter how many layers I had on, they were no match for the freezing cold. As my seventh time in New York (crazy hey!) I’d already done a lot of the sights – the High Line, the Statue of Liberty, MoMA, Top of the Rock, Times Square – and so it was a chance to just walk around, relax and enjoy what I saw. We did spend a whole afternoon at the 9/11 Memorial Museum – so much to see and so much to learn. It was so interesting to learn more about what happened, and how the survivors survived. There were 1000s of exhibits there from phone calls between the the plane passengers and their loved ones, to photos that had been made famous around the world and the symbolic Last Column of the trade centers.

I’d definitely recommend going to this in New York. It was interesting to read about their version of events since too. Although the cold meant I didn’t experience all the attractions I’d expected (still sad about it being too cold for ice skating), it did mean I had a lovely time exploring some of the bars with my friend Andrea. My friend from university, she moved to New York six months ago.

We went to The Whiskey in Williamsburg, right next to the Brooklyn Brewery, and one of those bars you could imagine spending the whole day in. It was like a cellar, all cosy, and with no notion of time or the craziness of outside Manhattan just across the water. Just two, super strong, cocktails later (for me, a Spicy Margarita and Grandma Joan’s Special Lemonade) and we decided to go to The (fancy) Wythe Hotel next door to take in the views of the skyline and have a mulled wine.

A few days later and I met Andrea again at The Keg Room in Manhattan – an Irish-American sports bar, where we had no interest in the sports, just the Riesling. And then we went to try and get into Rolf’s. Big mistake. Every year they spend $60k on decorations (why don’t they use the same ones I’m wondering?) making it the number one place for New Yorkers to go to feel Christmassy. It was 4pm on a Friday and the people at the front of said queue, outside, had been there for an hour.

Did I mention it was freezing? So we went to Molly’s Irish Bar, a few doors up, obviously picking up the passing trade for Rolf’s. They looked like they invested 10% of the $60k, at a push, yet it was full and the sawdust floor hinted to me that things might get a little crazy later on.

And so a bottle of Malbec later and we went on to Eataly. A huge warehouse that’s been turned into a food store of everything Italy inspired. On the roof they’ve set up a terrace, ski-style, serving food and drink. We spent the next five hours eating lasagne, drinking red wine, mulled wine and the free Prosecco they offered us to get off the table and drink at the bar.

Rounding up my drinking recommendations for New York. Expect to pay from $12 / £10 per drink, plus tax, plus tip, at 20%. Yeah, it gets expensive. 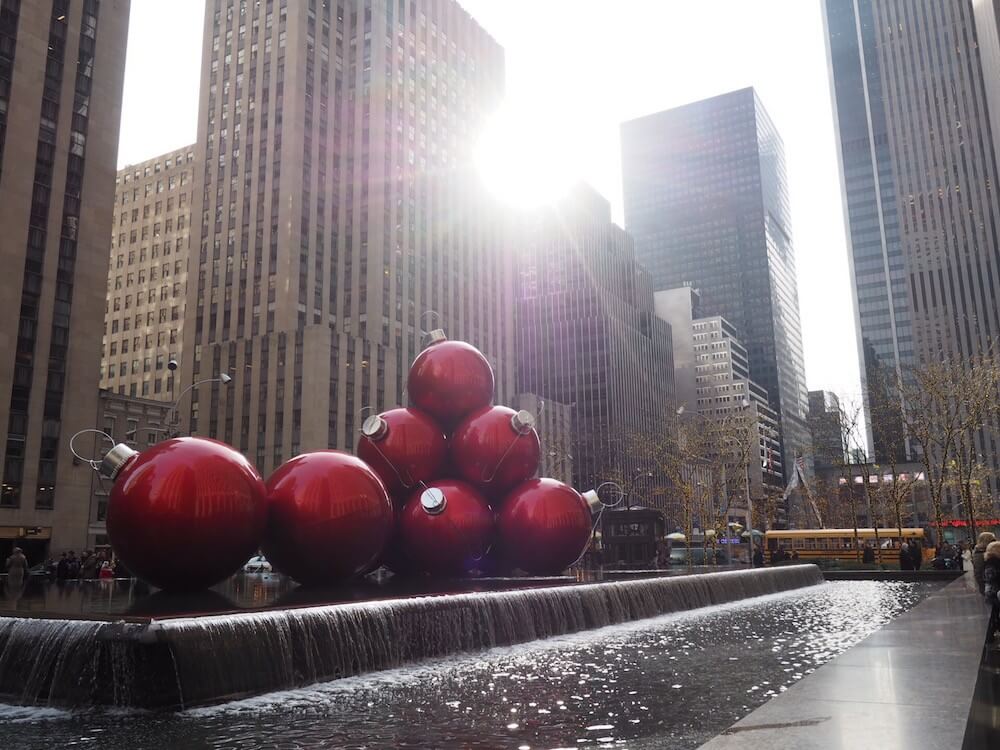 – Didn’t take one picture of my food in New York,
here are some massive baubles instead

If I listed what I ate in New York I’d be embarrassed. So here goes.

I kept getting to a stage where I was absolutely ravenous – could have something to do with the cold and the 20k+ steps I was doing a day – and anything would do. The fanciest meal I had was that one at Eataly, where a 10cm x 10cm piece of spinach lasagne cost $25 / £20.

Food is exp-en-sive in New York, even cheap food.

Every day for breakfast I had some variation of and egg and / or bacon and / or cheese from Hana Food, a hipster organic food shop, by Jefferson Avenue Metro stop in Williamsburg where I was staying. They were $3, and a coffee was $1 – the cheapest I found in the city by far (expect around $6 at Starbucks). And actually nice, Colombian, in fact. 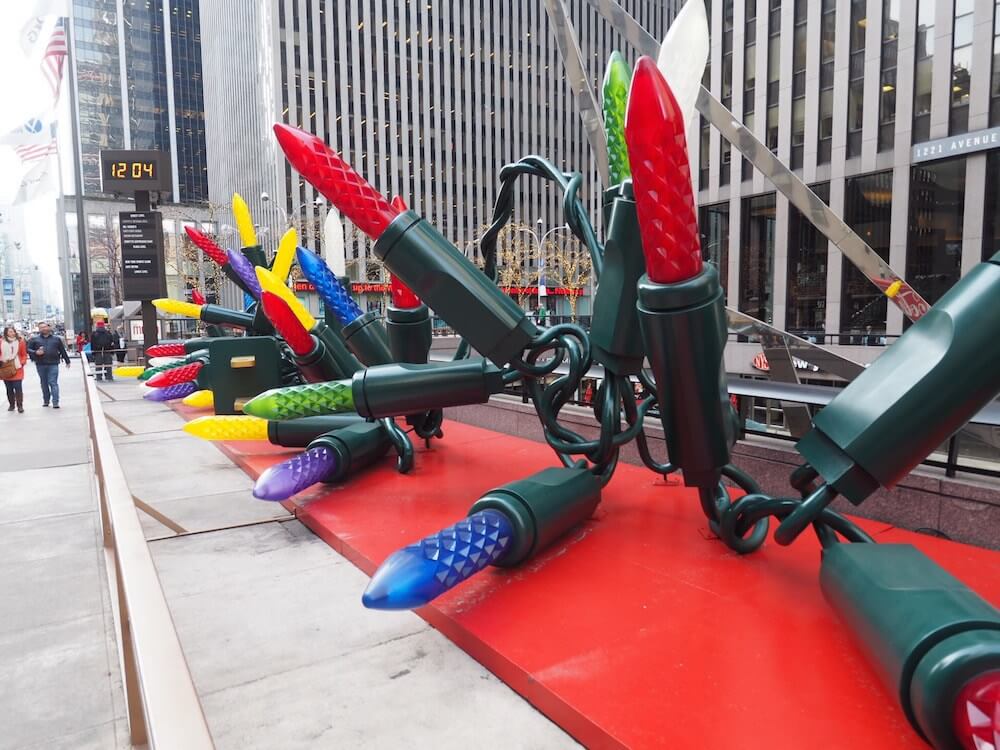 Other food devoured over my 5 days in New York included delicious pizza from Rays (chain, all over, I highly recommend, $7 a slice), tacos from La Chula inside Grand Central Station (3 = $17), pizza from Prova ($6), also in Grand Central, and a Kansas style Hot Dog from Zaro’s Family Bakery ($6) .

Every day I seemed to be at Grand Central Station for one reason or another. The food options in there were good for someone on a budget, and, as I was for those meals, by myself. I also had Wasabi sushi one day ($13), pumpkin soup and a bagel from Pret a Manger ($12) and actually missed two dinners thanks to the shows I went to. Although one of those nights I did pick up a hot dog from a street seller for $4. Grim, to the highest degree.

But, the best for last, the burger at Alls Well in Williamsburg was without a doubt, on a par with Honest Burger in London as one of the best I’ve ever had.

Yeah, I’m probably not the person to ask for foodie recommendations in New York, unless Grand Central Station and Alls Well are enough for you.

– If you’re looking for kid-friendly restaurants in NYC, check this post out –

Ahh, you can’t go to New York without watching a show right?

Randomly my friend Kellie – who I went to Wilderness Festival with – and her sister arrived in New York the same day I did. On the Tuesday we decided to get tickets for The Rockettes, apparently the best Christmas show in New York around.

It was so good. So good. 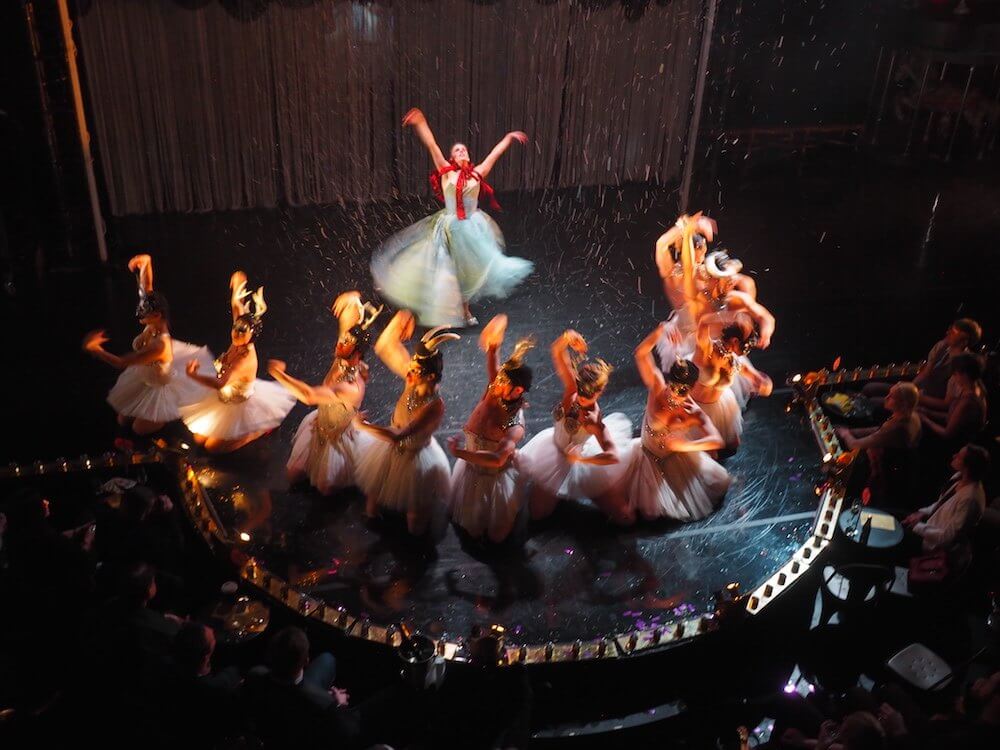 And then the next night Andrea had tickets to The Nutcracker Rouge – a burlesque take on The Nutcracker. The dancing, the storyline, the singing – it was all absolutely incredible. I know I keep saying things are the best, but this was honestly one of the best shows I’ve ever seen. My favourite part was when the dancer was high up in a hoop, singing Sia’s Chandelier operatically and in French, as glitter fell on her. Shopping in New York is no cheaper than in the UK. I think maybe once upon a time it was, but with the ££ being so low, not any more.

It didn’t stop the window shopping though and as long as you treat every shop as a museum – where you can look but don’t touch – you’ll be alright. And of course, being Christmas, some of the shop window displays were awesome. The highlight of my shopping experiences was walking up Broadway with a hot cider from Union Square – as there were so many pretty and unique shops to look at.

I also walked round Chelsea Market picking up a few presents as I went and I filled my basket in Century 21 with gifts for others, but mostly for myself. I actually had to buy a new bag to fit all my new possessions in. 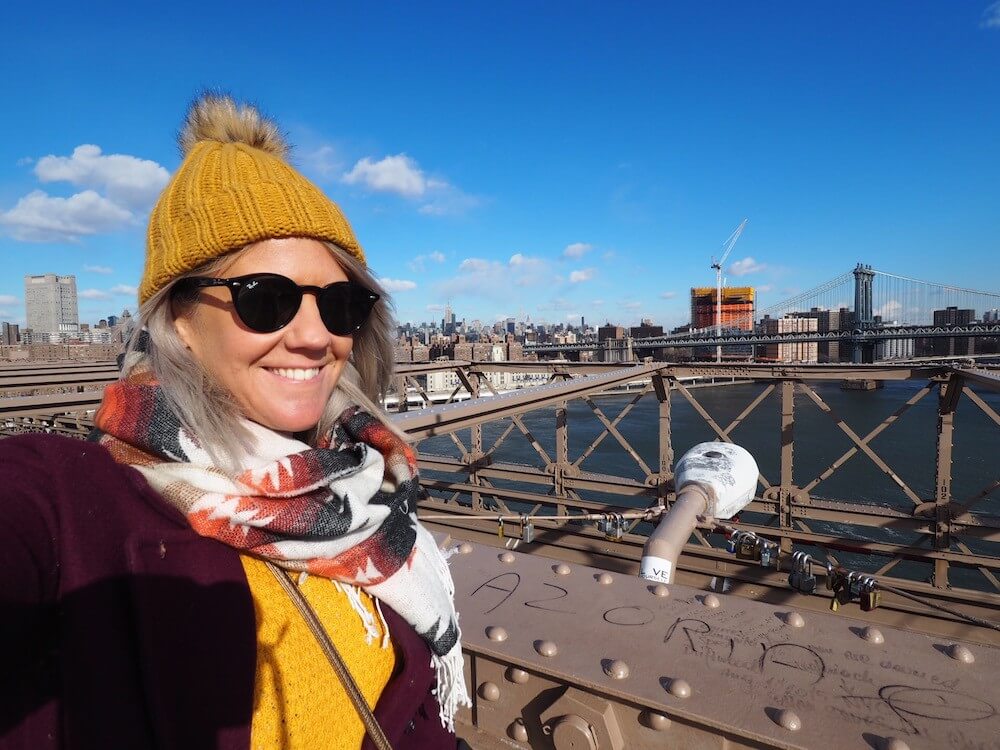 I’ve had a brilliant few days, but the reality of Christmas in New York is that the shops are packed, the bars full and the weather outside, literally, frightful. It was too cold to even contemplate the ice skating, and I had a quick peep in Macy’s, wanting to buy a Christmas decoration, but recoiling at the minimum $40 for pretty much any piece of hanging tat. Yes, this, was $40. If you’re happy to hot drink crawl the avenues and streets, as I did, make sure you dress warm, bring some fur lined boots – or buy some at Century 21 – and be prepared for the cold and the people traffic, then Christmas in New York can be a brilliant (probably) once in a lifetime experience.

If you do go, keep an eye on Company XIV to see if they’re performing, the Nutcracker Rouge was the absolute highlight.

Everything You Need to Know About the LA to the Bay Tour
← Previous
11 Best Places to Eat in St Kitts
Next →
Click here to cancel reply.

Do you still have your fingertips?? That looked so cold! Going to NYC during Christmas time is definitely on our bucket list! Now I know to bring gloves though:)

It looks so lovely, but I'm still glad I did NY in May. Even then it was a little chilly. Also, those shows look awesome!

Ah they were! Made the trip actually. Yeah it was way too cold – sorry to say I wouldn't do it again. Need my sun!

So cold FiFor, so cold. Had to have some sort of hot drink on the go at all times to try and warm up from the inside. Brrrr. x