Footwear for Glastonbury: Wellies, Hiking Boots… or Other?

Do you need wellies for Glastonbury?

Should you take hiking boots instead?

Or would you rather go for fashion?

Number one rule of Glastonbury: your feet need to be comfortable. You will be walking miles. Miles and miles. You need to choose the best footwear for Glastonbury so you don’t end up blistered, moaning and just generally totally annoying to your friends. No one wants to be ‘accidentally’ lost when they pop to the toilet, do they?

So, Glastonbury footwear. You need to ask yourself, what would you rather walk ten miles in the mud in?

Wellies, Hiking Boots… or Other?

Wellies are the obvious choice when the famous Glastonbury mud reaches three inches thick. You need that extra length to keep the squelch from getting near your toes. It’s not about having trenchfoot at a festival.

I guarantee as soon as you enter the Glastonbury field you’ll see about 100 people in Hunter wellies.

When I went to Glastonbury in 2012, wellies were an absolute necessity for the first two days. But, all around me people were losing their wellies to the mud suction. I can vividly remember my ex boyfriend losing one of his and then just stood there like a desperate flamingo unable to move, until I pulled it out for him to tread in (shouldn’ta bothered, lolz).

So, wellies are great for thick mud, but they’re also harder to keep on your feet when the sucky mud pulls them down. You can get round that with some well fitting wellies, or ones with laces, like these. I’ve bought these ones from ASOS – which I’m going to finally decide on when I see the weather forecast – and if the mud comes higher than that? Well, I’ll just take them off. Or maybe take some selotape to put round the top? 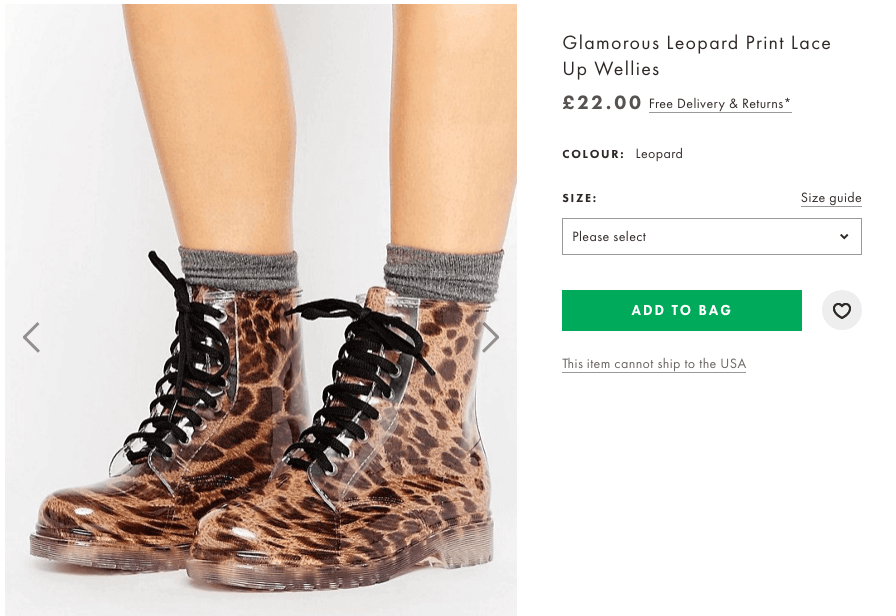 Personally I won’t be taking any full size wellies. I don’t have any that are broken in, they’re heavier to walk in, they chafe on the top of your toes and where they push against your leg with every step round the top, and they’re bloody heavy to carry if you don’t end up using them.

The ones I wore in 2012 were just black Dunlop ones that I bought on site from one of the Glastonbury footwear shops. Don’t remember how much I paid but I’m sure that seeing as I only had trainers they were worth every penny.

I love wearing hiking boots. I lived in them when I went to Tanzania, while everyone else was in trainers, leading me to get the nickname SpyGirl. That was also cos they knew I was a blogger though – mix of the two. Anyway I’ll wear hiking boots at any opportunity, they’re so comfy, make me feel like I’m going on an adventure and they’re sturdy as.

The hiking boots I have at the moment are just from Sports Direct – think they were about £30. Oh look the same ones are on Amazon for £28 ^. When I was buying them my friend told the sales assistant I was off to the Costa Rican jungle on assignment, which I kind of was, and the sales assistant was super impressed. I felt like Indiana Jones, or female equivalent.

Anyway, you can get hiking boots for cheap – try TK Maxx, Amazon or the sales area at Millets et al.

I like hiking boots for festivals because they’re easier to manoeuvre, easy to carry (if you don’t wear them on the way, which I’d recommend) and they’re very comfy. They’re better than trainers because they’re more resistant to the elements – rain, hard ground, rough terrain, festival toilets – and I feel like they give you energy, like you’re ready for action, rather than that laden down feeling of wellies. I’ll be taking mine.

Shop the boots at New Look

Most of the festival fashion pics you see will feature some sort of black, slightly heeled boots – all for it, if they’re comfy. I wore black heeled boots to Wilderness Festival, some awesome ones, but despite it being dry and sunny for the festival they were ruined by the time I got home.

I won’t be chancing it with ‘fashion’ footwear this year. I don’t have any that are broken in and I wouldn’t mind ruining right now, I don’t want to wear trainers and I’m just happy with my hiking boots.

I will be taking a pair of sliders for emergency toilet runs at night though. I plan on sleeping in socks so flipflops just aren’t practical and it can take too long to get your boots on properly when you want to dash out quickly. I got mine from Primarni.

What if it’s sunny?

Of course I’ll be taking a pair of flip flops too. Despite needing wellies for the first two days of 2012 Glastonbury, for the next few it was boiling hawt. Got to be prepared.

Footwear for Glastonbury:
Wellies, Hiking Boots… or Other?

I think your Glastonbury footwear choice depends on what kind of festival goer you are. If you just want to stand around looking fabulous, you can wear the kind of festival footwear that lets you stand around looking fabulous. If you want to get stuck into moshpits, everything the festival has to offer and not to have to trudge back to your tent to change when they hurt / it gets too hot / too cold, then I’d say it’s a toss up between wellies and hiking boots.

Or you could, like my friend and I did for Global Gathering one year, just go barefoot. Although for Glastonbury I’d say that’s a bloody stupid idea.

Remember:
what would you rather walk at least ten miles in the mud in?

Wellies, hiking boots or other?

My Day on the Isle of Wight: With Queen Vix, the Railway and a Beach
← Previous
9 Absolute Best Restaurants in Southampton
Next →
Click here to cancel reply.

Goodness truly?! Yowser. I have the lower leg wellies I discussed above, and after that I figure I'll simply need to get some more on the off chance that they can't hack it while I'm there. Just inconvenience I found was that they were icy. I had two sets of socks on and my toes were as yet cool. Might need to go for the three sets for Glasto, to ensure I'm not the person who's groaning.

I guess you just have to decide what's best for you and then work with what money, time and wellies you have! :)

The forecast is looking good for Glasters this year. Last year, the problem was that it was raining now, so the ground was already sodden by the time they opened the gates. Wellies was the only viable option last year, and even then, the gloopy mud could take them.

Mud permitting, I'm totally with you on the walking boot front. Boots are made for walking long distances and 10 miles a day is a good estimate. You've got to be comfortable.

If you must wear wellies, get gel insoles. Spend some cash, get decent ones. The first year I went it rained on the Saturday, and I was so pleased to be able to do the Glastonbury-Welly thing... until after a few hours in them, my feet ached, and all I wanted to do at midnight was go home. Last year - double gel insoles, and I was good all week.

The mud there is so sucky isn't it, as in, sucks you in. It's pretty amazing. Gel insoles are a great tip. Adding that to the list of things I need to buy tomorrow – thank you! Tough on your feet when it's a difficult terrain and one minute they're hot and next cold – love that idea though :).

I'd be taking my tried and trusted neoprene lined Barbour wellies and my super comfy Sketcher walking flip flops. Covered for rain and sunshine!

Sorted! I had ankle wellies at Isle of Wight Festival this weekend and even though it wasn't that muddy it definitely helped to have sturdy boots and to know that it wouldn't matter if the terrain suddenly changed. Just got to be prepared for everything!

Fingers crossed this year Glasto isn't as muddy as last years as it was bloody nightmare! I have some lace up hunter wellies that have seen me good through all kinds of swamp like conditions. I can tie them up tight against my calf so I don't lose them to the mud. The amount of people I had to help out of a sticky situation because the mud had suctioned off their welly was cray cray. My BF swears by walking boots and gaters if its very muddy though, and I think you do need a little bit more foot support at Glasters because the site is MASSIVE! I wear a watch with a step tracker and average 10 miles a day walking. Over 5/6/7 days that's a heck of a pounding your poor feet are taking!

Always good to take some flip flops though, even if its just for early morning wees, hanging round at camp, or travelling home in the car/bus. let those tootsies breeeeeeeath :)

I've just been wearing lace up wellies to the Isle of Wight and I think they're definitely the way forward. Very comfy, considering they were my first wear, and definitely would've held their own in all circumstances too. It's been a while since I went to Glasto but I definitely remember trudging for miles. Feeling a bit nervous about that this year – hope I'm fit and sturdy enough! And yeah, gotta take those flip flops. Amazing how light and freeing they feel when you've been trudging around in wellies for so long.

I can't believe I wasted time trying to find really cute wellies for Glastonbury "muddiest year ever" 2017 ? My top tip: if they are forecasting epic rain/mud, pick up a second pair of wellies from your local charity shop. I destroyed my first pair in 48-hours and heard lots of stories about the sole or the entire boot being ripped off by the suction of the mud! Having a fresh pair for Saturday and Sunday was heavenly ?

Oh really?! Yikes. I have the ankle wellies I talked about above, and then I guess I'll just have to buy some more if they can't hack it while I'm there. Only trouble I found was that they were cold. I had two pairs of socks on and my toes were still cold. Might have to go for the three pairs for Glasto, to make sure I'm not the one who's moaning.