How to Do the Rajdhani Express Train Overnight

Posted on Last updated: May 5, 2015 By: Author VickyFlipFlop

The train system in India is mind-boggling. It was difficult to find any information on taking the Radjhani Express Train from Alleppey to Madgaon and we definitely went wrong before we managed to get it right.

Getting a ticket for the Rajdhani Express

To get a place on a train in India you have to book your train tickets in advance. Tickets go on sale 90 days previously. I’d left it to my friend Chloe to book the tickets and she was on there 87 days beforehand thinking it would be easy and she’d be able to book there and then. Not the case. After being on sale for just three days the tickets for the Rajdhani Express train we wanted had sold out.

Cancelling a ticket for the Rajdhani Express

Many internet searches later and we were reassured that if we were in the top 10 of the waiting list we’d definitely get on. We remained at numbers 14, 15 and 16 until a few days before we were due to travel, 85 days later, and we realised this wasn’t going to change if it hadn’t already. We also realised we were actually nearer a different train station, where we’d be at numbers 4, 5 and 6 if we booked from there.

We cancelled our tickets, (amazingly) got a full refund and rebooked, sure it would all be fine when we got to the station in Alleppey.

Travelling on the Rajdhani Express

Only two of the three of us ended up with seats and I remained on the waiting list. It was 9:40pm and our train conductor said I could use a bunk until midnight when I’d have to move and share a bunk with Chloe, if I wanted to use the train. Of course I agreed. At midnight Stu, my other friend, would have to go in a bunk in another carriage.

Amazingly, or perhaps thanks to the few beers beforehand, I fell asleep about 20 minutes after getting on. All I had was some blanket, which I’d hate to know how many people had used before, and my head was resting on my dry bag.

Midnight came and the train conductor arrived with his clipboard rattling the door to wake me up. For some reason this was when he decided to give me a sheet and a pillow. I was freezing. I went and snuggled down with Chloe. The two of us lay side by side in a smaller-than-single bed, while a family of three took up the other beds in our room. Oo Chloe was lovely and warm, I soon heated up.

Stu was sent off to a bunk down the corridor and the lights went out signalling to us it was time to sleep. Or at least try.

I kept waking up through the night, realising that I was cocooning myself in the sheets while poor Chloe was out in the cold. She puts up with a lot that girl.

At about 6am the train conductor came round to wake us up to tell us they’d be serving chai in an hour. God that was annoying. I’d finally managed to nod off before he woke us with the good news, obviously he didn’t think a ten-minute warning was long enough. By that time we just decided to get up, as did our new family around us.

Breakfast on the Rajdhani Express 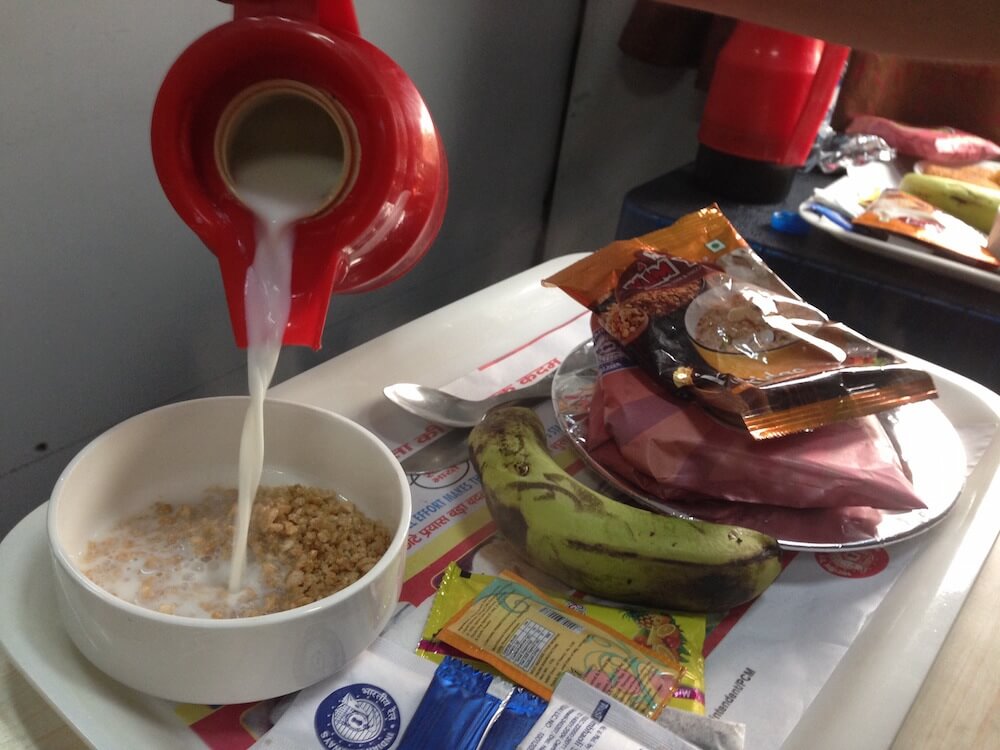 We went to see how Stu was getting on and found out he’d actually had an empty bunk all night, despite the train conductor waking him to warn him every 30 minutes that someone would be coming soon.

With his living like a boss in a bunk of his own we decided to have breakfast in there. The waiters came round with pop up trays and plates of food on top. We had some sort of wheaty/porridge mix, two slices of bread, a banana and a coffee. This was all included in the price of the original train ticket, or so our tickets told us.

When the two waiters came to collect the plates they shut the door behind them and demanded a tip. The three of us were unsure and definitely uncomfortable that they’d closed the door behind them, and handed over 100 rupees to which they asked for more. That’s only £1, but it’s quite a bit in India (equivalent of 5 cups of tea on the train, to give some perspective). We said no but they wouldn’t move so we gave another 100 and said that’s it. Reluctantly, they left.

We asked our ‘new family’ later and they laughed and said they were just doing it because we were tourists and no one else would’ve given one.

Top tips for the Rajdhani Express 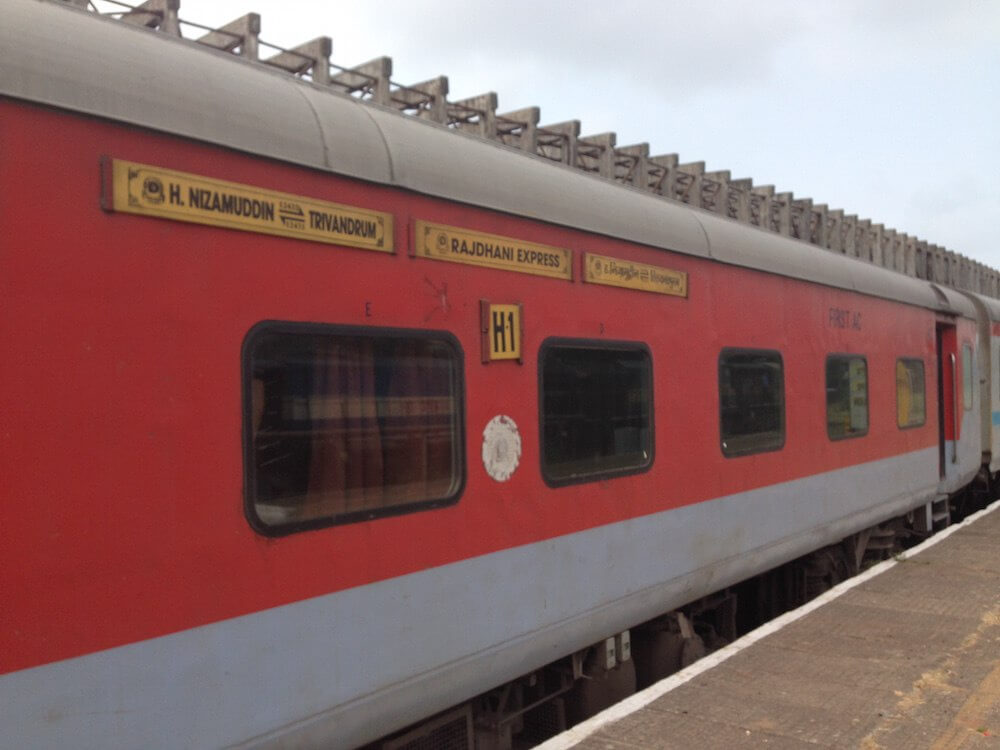 We’d been told by someone along the line you needed to get to the train station early to guarantee getting on. This was not the case.

Trains in India are often late, and our experience on the Rajdhani Express was no different. About 40 minutes to be precise.

In India if you ask a different person you’ll get a different answer every time. The first lady we asked about the whole waiting list issue told us there were ‘no trains tonight’, even though they were clearly marked on the board. It continued like this on the platform, depending on who we asked – so don’t take the first answer as gospel, even if it’s from someone at the information desk.

I was pleasantly surprised by the toilet on the Rajdhani Express, especially after my grim experience on the trains in Vietnam. It was cleaned regularly, actually smelt ok and was an overall perfectly fine experience.

It probably goes without saying but drinking culture on trains in India isn’t like in England. We’d got a few sneaky beers in the bag just in case, but yeah, as soon as we got on we knew it was not the place to get them out.

In all the trains we took in India we found people to be so friendly. When we got on this one the three of us had a bunk mate until 12 and he and Stu (a physicist) talked about radiotherapy and other cancer treatments until he left. As he was leaving the guy told Stu “I very much like you”. In the morning our ‘new family’ wanted to know all about us and we learned how they were travelling to visit universities around India.

We found out when we came into the station that you can actually lock the door in the cabins, if you like. Could stop all the pointless pop ins from the train conductor, although you’re at risk of not waking up.

Tipping on the Rajdhani Express

When we were coming into our final stop at Madgaon in Goa our train conductor asked for a tip too.

We were unsure whether he had really helped us, by letting me and Chloe share a bunk, or not. Again, we asked our new family in the bunk how much we should tip and they shook their heads. They wouldn’t be giving one but we could give 100 rupees between us if we wanted, so we did.

When we asked someone about all the tipping in Goa, they said that if we’d’ve bunged the train conductor a bit more beforehand he would’ve rearranged it so we could all share a room all night. You live and learn!

Dammit, man! Tipping when traveling is such a weird, complicated matter sometimes. I cannot believe those people were demanding a tip in such a creepy way, too! "Your tip is in the bathroom, my friend".