My Stay at The Oak Alley Plantation in Louisiana

Thought I’d do a little flashback to my time in Louisiana last year, when I stayed at the incredible Oak Alley Plantation.

It’s about an hour’s drive from New Orleans, it’s where Beyonce filmed her Deja Vu video, and, most famously, it was once known as The Bon Séjour Plantation and was home to Valcour Aime, aka the ‘King of Sugar’. He was a ridiculously wealthy ‘slave owner, sugar planter, philanthropist, and pioneer in the large-scale refining of sugar’ (#Wikipedia). 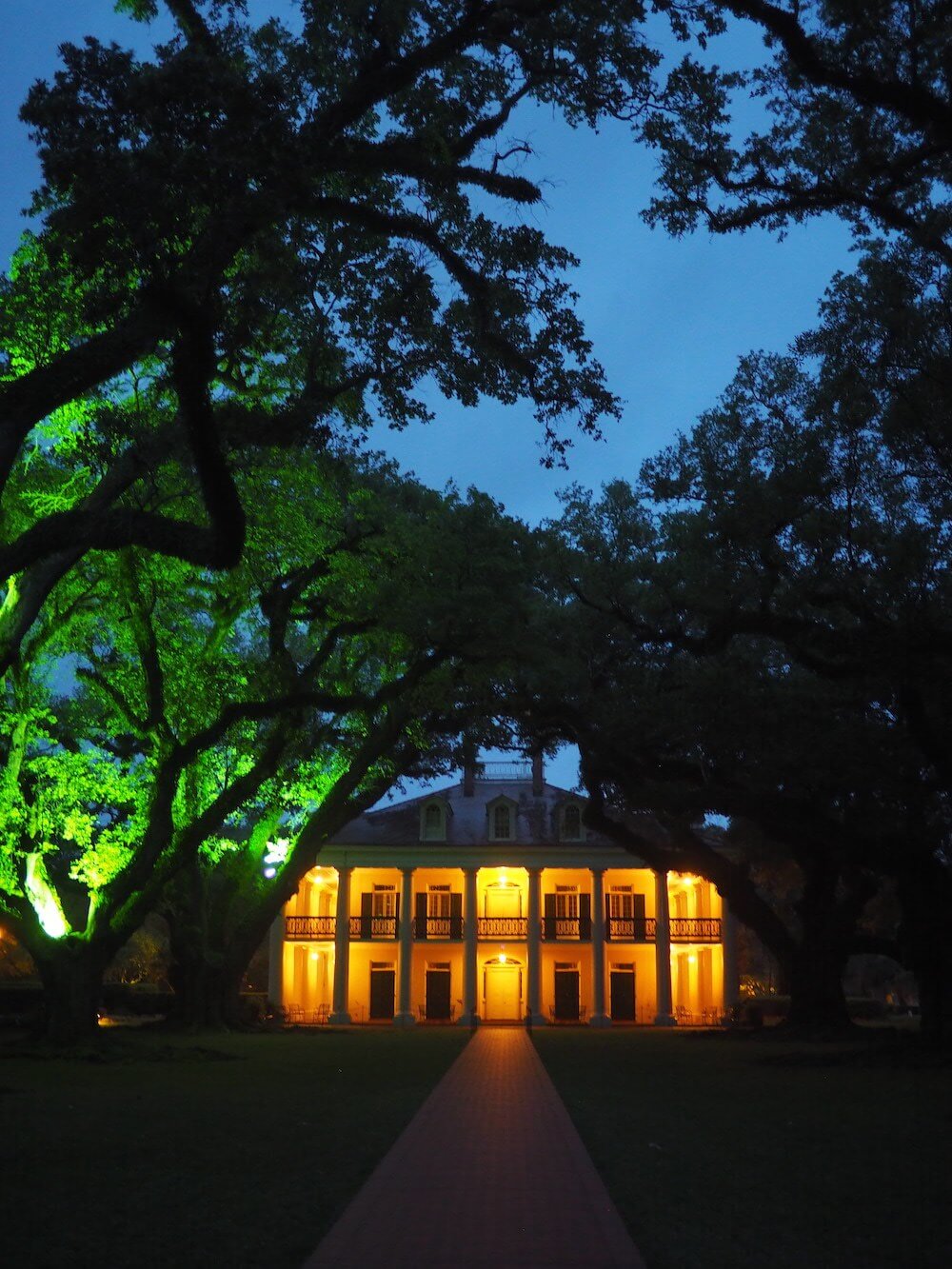 Now the Plantation is a Natural Historic Landmark and one of the best looking plantations in Plantation Country, as the area is known, thanks to the alley of oak trees leading up to the front door. You can totally see why it’s a favourite spot for weddings. My Stay at The
Oak Alley Plantation in Louisiana Seeing as Cailin (TravelYourself) and I were in the area we went along to check it out, and to stay over in one of the little cottages out the front. Oak Alley has so much scary history, I totally freaked myself out before bed, even though not a single thing actually gave me reason to. My mind is way too over active. 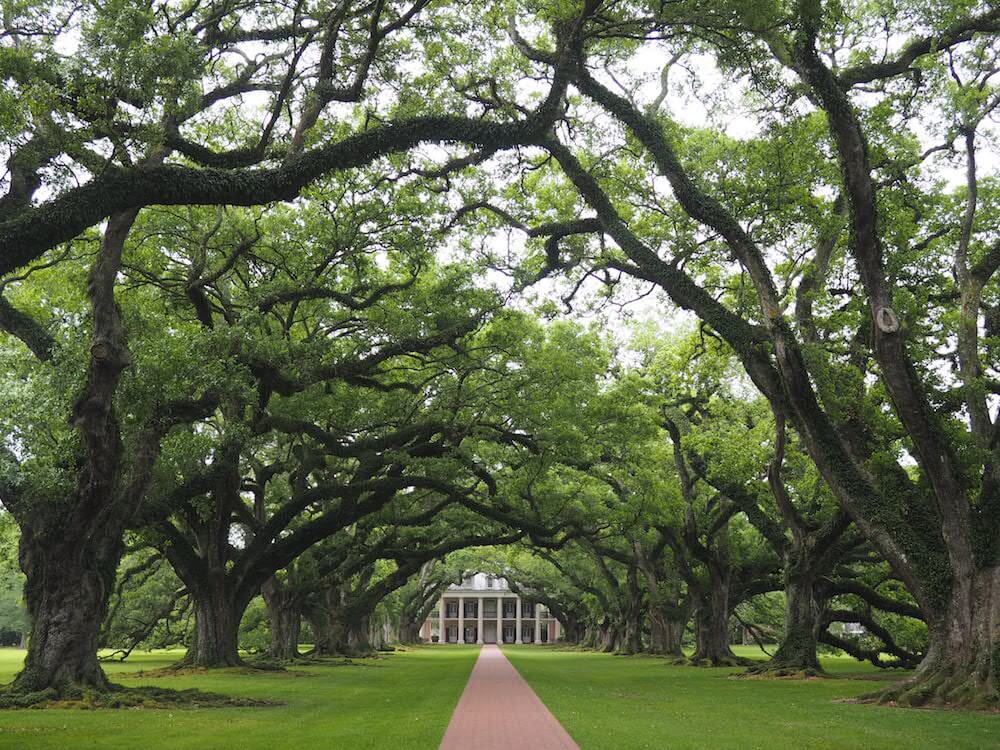 Thanks to us actually staying in the grounds, in our cottage, we were allowed to roam the around as we liked before the tourists rocked up at 9am. I’d definitely recommend doing this if you’re into your photography as you’ve got no chance of a person-free shot later in the day.

This place gets busy. 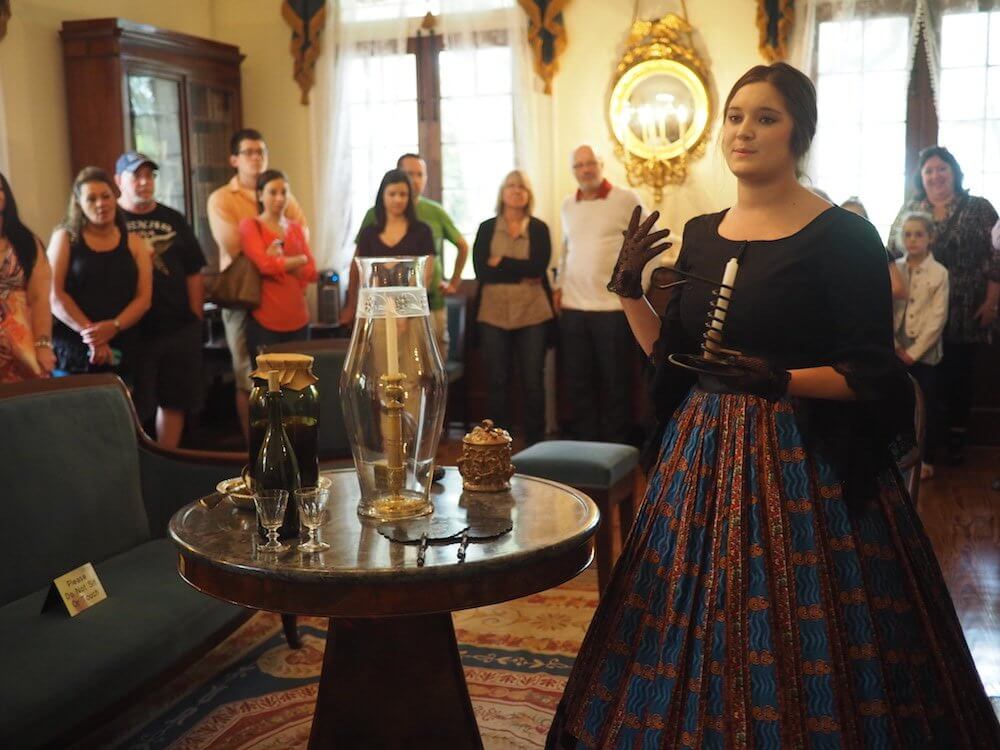 We joined the tour ($20) to learn more about the mansion and grounds.

One of the lessons that sticks out most in my mind is that in those days they’d give you a pineapple to welcome you when you arrived, and then when they wanted you to go, they’d leave another one on your bed. So now I do that with all my guests too. 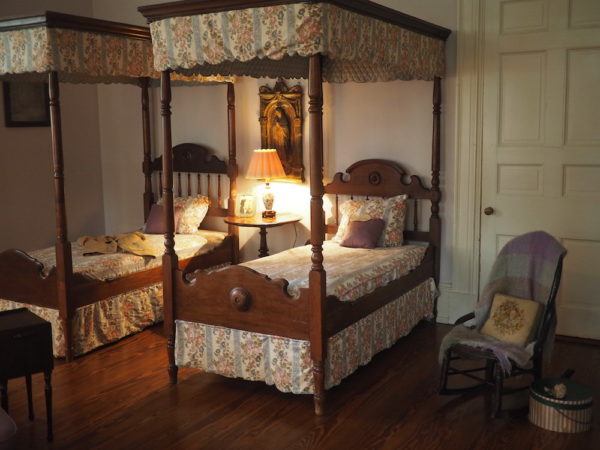 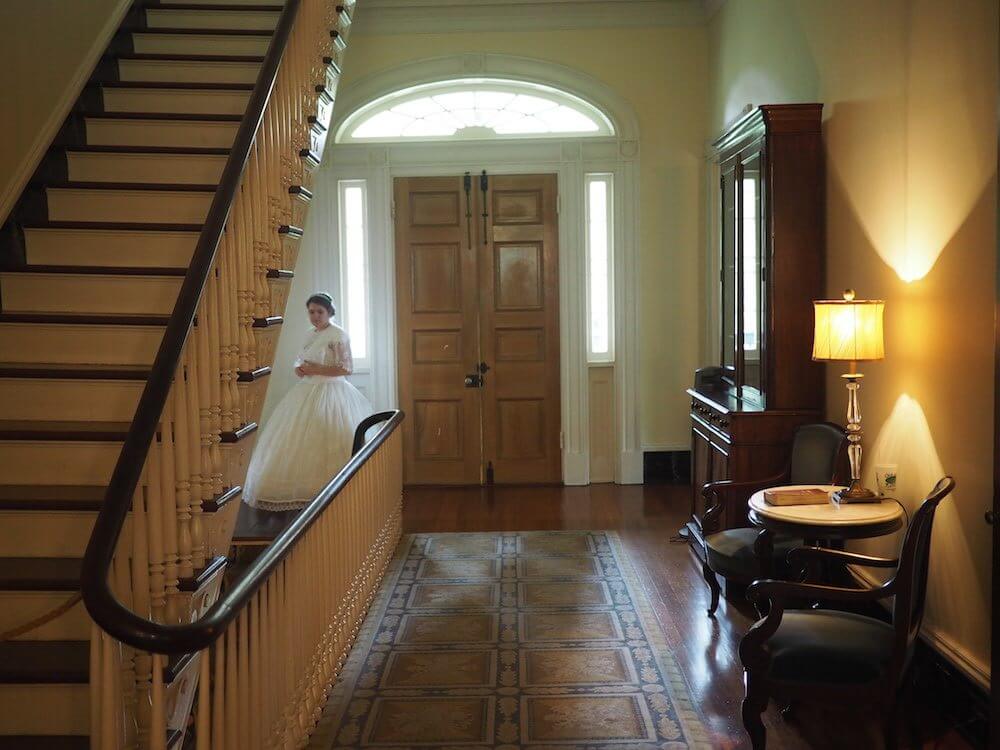 We were taken round the bedrooms, the lounges, hallways and eating areas. Another one of my favourite things was the fly swatter you see above the table there – some poor guy would be on the end of the rope you see in the corner of the room, pulling it back and forth so the rich folk didn’t get any flies in their soup. There’s a little mint julep booth on site so you can drink them as you walk around the house and the slave workhouses and gardens outside. This felt kind of wrong, given the dark, dark history, but I guess it’s all in keeping with the traditions of the time.

I loved the way the tour guides were dressed up to show off what people would’ve been wearing back then. 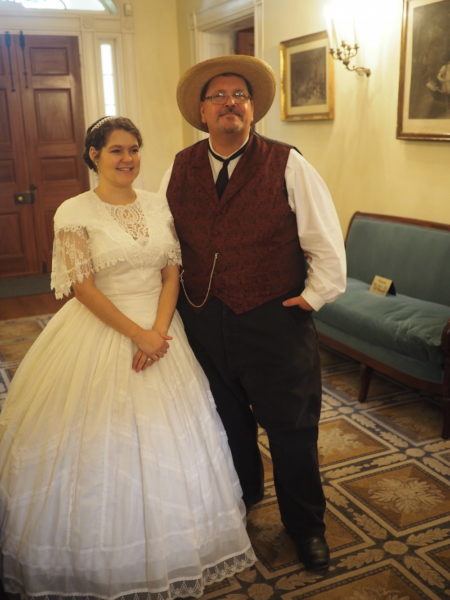 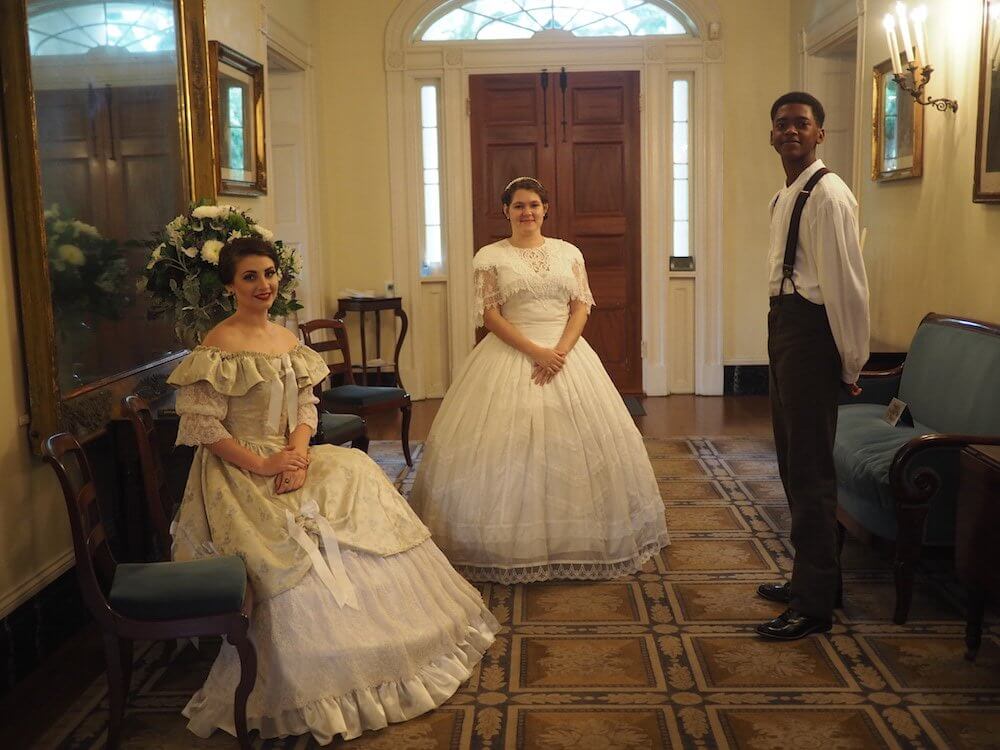 That oh so American proposal

We were lucky enough to be there on a day when one staff member was elaborately asking another staff member to prom. I honestly got so excited to be a part of it. Well, to watch it. 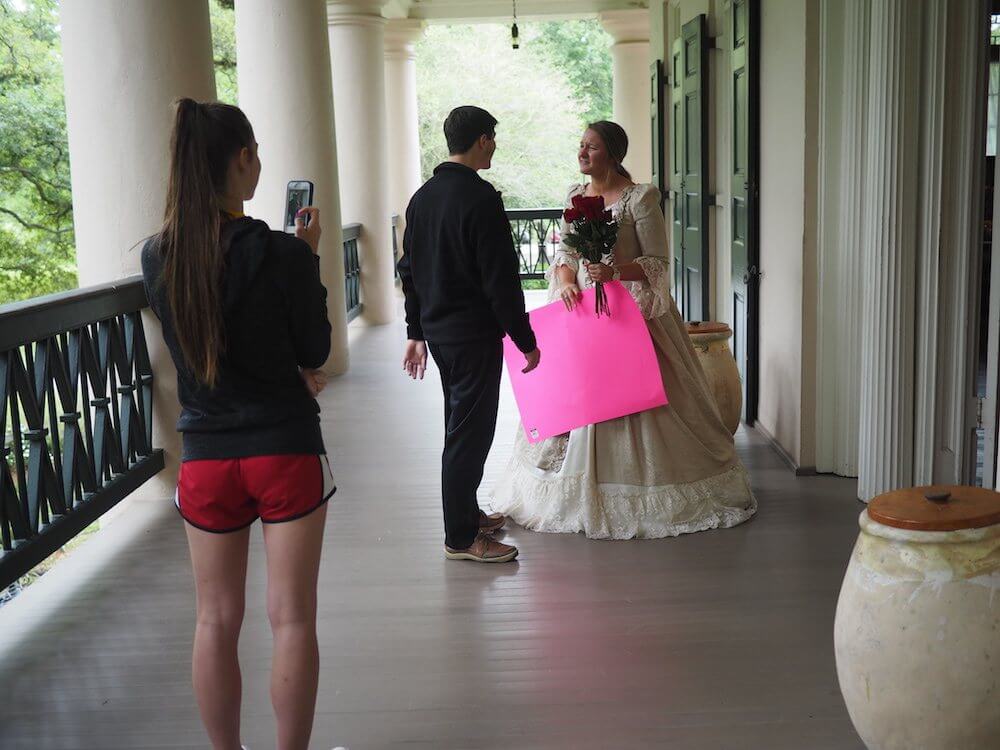 We were with him on the outside of the balcony doors and she was inside with a group – as she came out he had a card held up saying ‘Will you go to prom with me?’, or similar, and she was crying as she came through and he held up the roses. She said yes. So cute. So American.

All played out over the balcony that looks out onto the incredible drive. Why didn’t I get that when I was 17? Apart from freaking myself out about what may or may not have happened in my room thanks to the days when treating people worse than dogs based on the colour of their skin was normal, I really enjoyed staying over at Oak Alley.

We had a room each, a big kitchen and a nice lounge.

We spent the evening chilling in our lounge watching some super American film, possibly Mean Girls, and eating the bowl of true Louisiana-style chicken gumbo followed up by bread pudding that they’d left for us. It was delicious.

Stay over at Oak Alley Plantation and you get to enjoy breakfast at the restaurant too. I had some Étouffée, another one of Louisiana’s traditional dishes you need to try if you visit. If you don’t want to stay over, make sure to visit the restaurant for lunch instead. Rude not to when it’s there. And don’t leave without checking out the little shop either.

How to get to Oak Alley 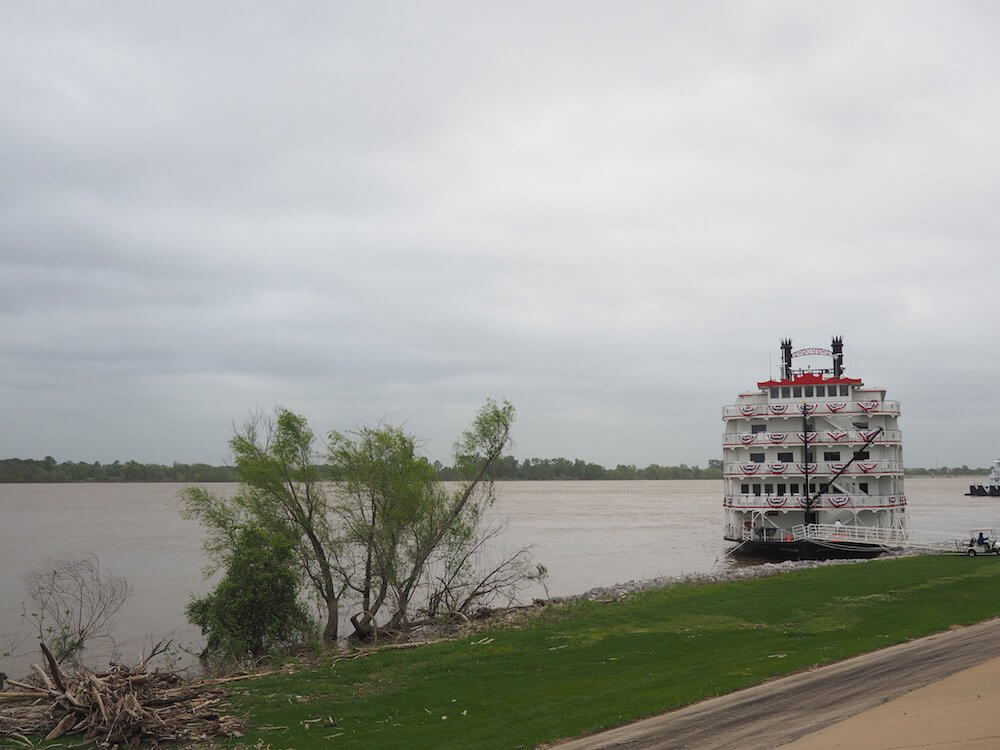 We were on a week-long tour of Louisiana, checking out a few spots, so we drove there in our hire car. It’s only an hour from New Orleans.

There are so many plantations in the area but Oak Alley is probably the most famous, thanks to how grand it is and its use in popular culture. We went to two other plantations in the area – the Houma Plantation (above) and the Nottoway Plantation (below). We didn’t take tours in either, but had a little look around the grounds. 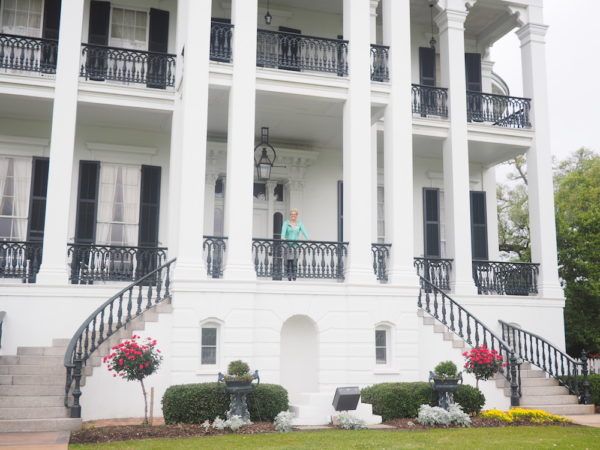 Depending on your interest in slave history and / or horticulture, you could spend a week going round all the plantations in the area and staying at them. I think two nights would be perfect though.

I stayed at the Oak Alley Plantation thanks to the New Orleans CVB & Louisiana Office of Tourism. All thoughts and experiences my own, obviously.

Have you seen my New Orleans video?

More on my Louisiana trip

It’s Time to Road Trip Louisiana (Without My Luggage)!

8 Top Tips You NEED for Las Vegas
14 Coolest Things to Do in Panama City Beach, FL