To walk down the street in Tokyo is to stroll a gauntlet of innovation and interest. Not every street is the same, of course. In this post I’m talking the main streets of Shibuya, Shinjku, Ueno and the like, the streets where you couldn’t get much more ‘Tokyo’ than if you were singing karaoke, knocking back sake and were dressed a Harajuku girl doing kawaii poses.

Over the 12 days I was in Tokyo the excitement of walking a new street never waned. You can’t even imagine what awaits you round the next corner in that city. Streets there are generally wider than the main streets of London, never as busy, and even in the more built up areas it seemed a lot calmer than other cities I’ve been to when it came to people. But when it came to characteristics, I’ve never seen anything like it.

On the streets of Tokyo I learned to expect the unexpected, but could generally count on the following…

I need to see some stats relating to the business side of all the vending machines in Tokyo. They’re everywhere. The drinks are only 100Y and they come out just the right temperature whether you’ve ordered coffee or coke. How can all those vending machines even make enough for the electricity to power them? I’ll find out. Check out these touch screen ones at Tokyo Station. You can get beer, cider, corn soup, the usual soft drinks and a whole range of coffees, all 100Y, always within a three-minute walk of where you are. They were even on the mountains when I was skiing! I came across this little beaut near Ueno Station. A street glasses cleaner. You just put them in the water, the box vibrates, does some magic cleaning thing and there you have it, you can see clearer than ever before. So useful – why have I never seen this before?!

One of the things you notice about the pedestrians in Tokyo is that they actually stop when the lights tell them to. They will dutifully wait until the green man pops up to tell them it’s safe to cross over. In fact it ended up being one of the 7 things I don’t like about Japan.

Queueing is interesting on the streets of Tokyo. People will queue to cross the road and cross calmly – not like the mad rushes where it’s every man for themselves on Oxford Street in London. There are courteous queues to get on buses and everyone waits their turn. People are just… nicer here. 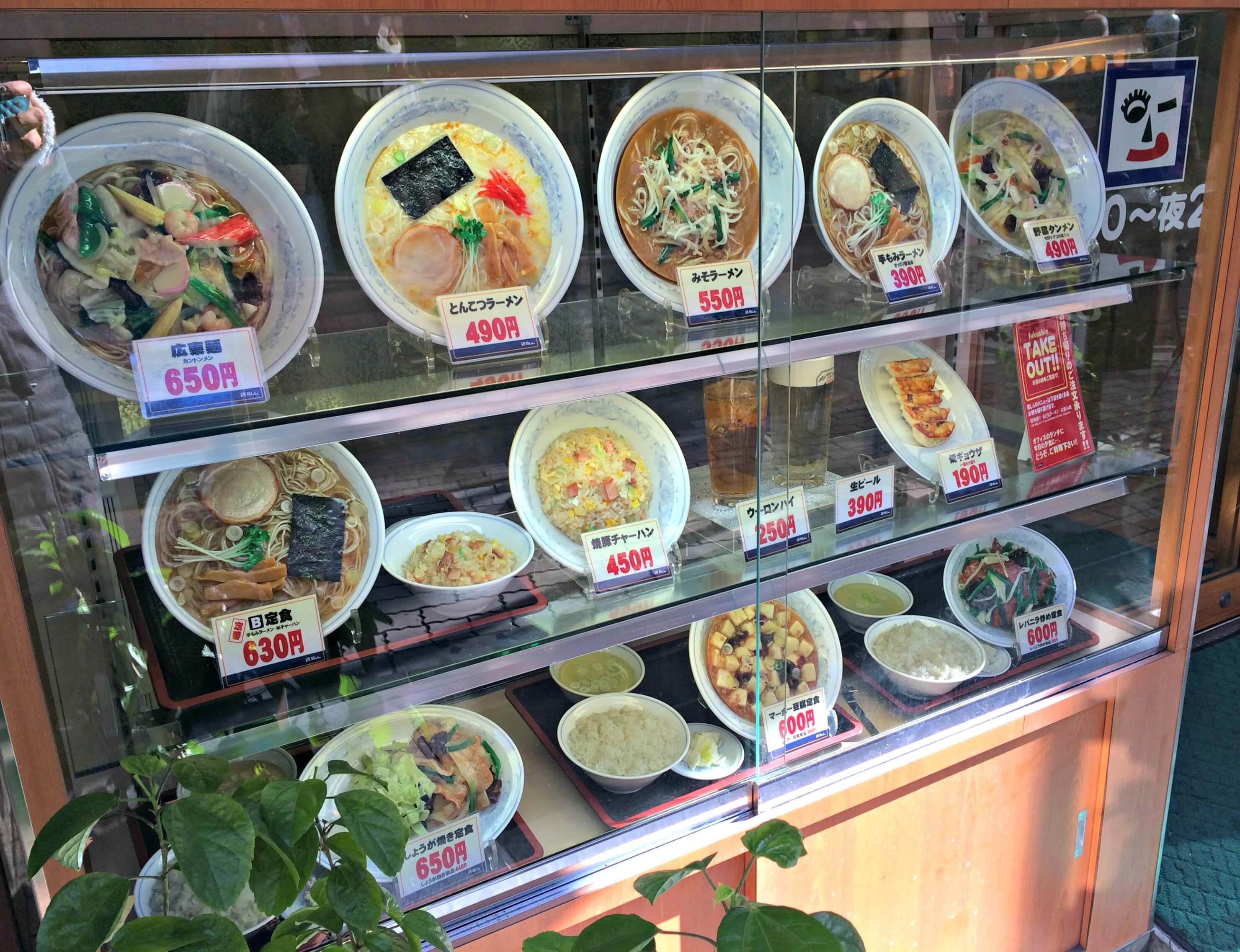 I’ve seen more plastic food displays during my time in Japan than in the other 30 years of my life put together. I’d estimate half the restaurants in Tokyo have some sort of display outside to entice you in with their plasticky wares.

There’s even a plastic food museum in Tokyo where you can go and admire all kinds of fake culinary delights.

And if it’s not plastic, it’s a photo. Plenty of places have both. Huge bowls of ramen loom above your head, while the sushi imagery covers the front of the shop. At least it makes it easy for tourists to decide what they want, but y’know, food photography is tough. And a lot of the photos had the opposite of the intended effect for me. Food photography is hard – I learned that during my time working on the reader’s letters at Good Food Magazine. Even when the shops are closed they keep their cool with intricate murals on the shutter fronts. On my first day I was up and out, jetlagged, at about 7am and saw loads of them around the Sensoji Temple. The detail and artistry makes the streets look so much nicer than the usual graffiti ruined ones you’d see in other countries. 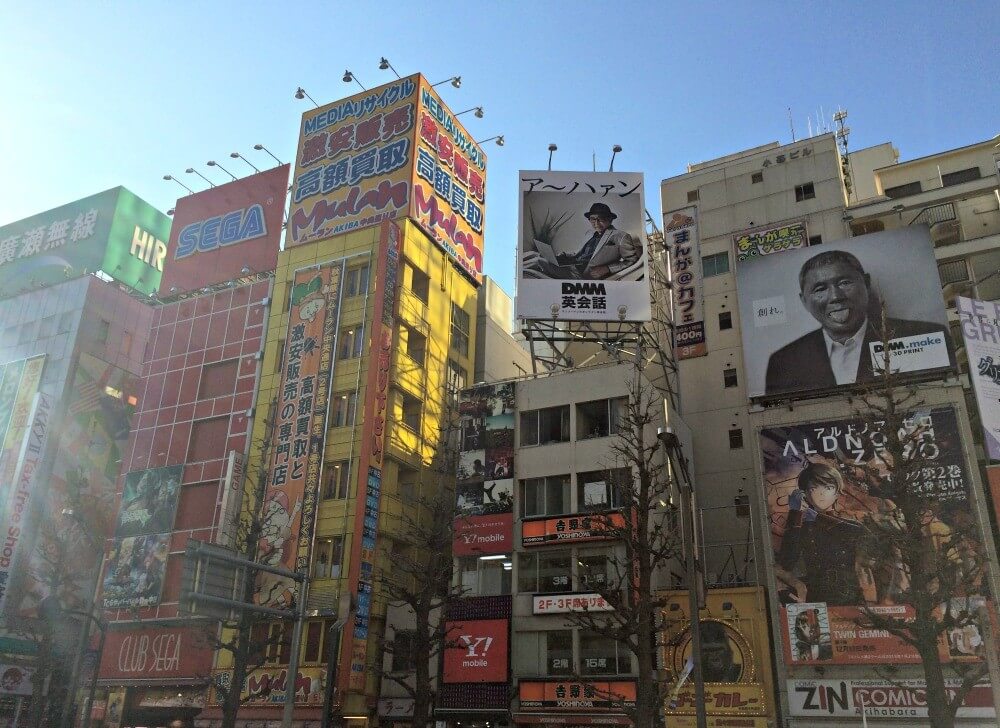 Tokyo is high. Unless you’re in a department store in England it’s usually one plot, one shop, not the case in Tokyo. Different shops and restaurants are stacked on top of each other so you need to keep your eyes high to see everything the city has to offer. Buildings could go up 10 floors and you need to keep your eyes peeled as the address you’re looking for could be right up there on the 8th. Each borough in Tokyo is historically famous for some trade or skill and you’ll see references to it throughout. Ryogoku, where this photo was taken, is famous for sumo wrestling so you see these guys lining the street. Look over the road and you can see one there too. They love an arcade game in Tokyo! Huge metropolis’ of row after row of them flank the streets of Tokyo. Go in and you can see people frantically flicking pinballs, beating drums or trying to win a crappy toy they could’ve just bought down the street.

As you can see, walking the streets of Tokyo is an adventure!

Kids in Tokyo, they don’t know they’re born. When I was young my friends and I would be happy with your average photo booth in a shopping centre. We got excited if you could get 16 small photos rather than 4 normal ones. We’d get them done, go to Partners stationery shop and ‘borrow’ the scissors to cut them up, then keep them in our purses until the next Saturday when we’d replace them with more. In Tokyo you can get as many photos as you want, in different poses, and then add logos, symbols, writing, eye colour, lip colours and blush to your face. Known as ‘Purikura’ the photos are unsurprisingly crazy popular with teenagers who gather around to get photos with their BFFs and boyfriends (the ones I saw showed no signs of reluctance). On one street in Harajuku there were five of these Purikura ‘factories’ each with at least ten machines in. It’s a pretty big deal! 1. Choose your machine – they all have a different theme.

2. Put 400Y in the slot and select the music you want to pose to. I chose the only one I’d heard of – Live While You’re Young by One Direction.

3. Step inside and the machine will show you 5 different poses to copy one by one, do as you’re told and give it your all!

4. Go to the other machine and get on the drawing board. Go for it. You just need to work your way around the Japanese language and try to beat the clock. As you can see in my final image I didn’t have time to edit that last pic, annoyingly the one that printed twice.

5. Once the time has ticked down your photos will be ready out the front. In fact, I can’t wait to get my next hit.

Japan Bucket List: 40 Places Not to Miss in the Land of the Rising Sun

Very interesting!! Thank you so much for sharing things with us that most of us will never see in person!! ?????

Hi Eileen, thanks for reading and commenting. Yeah there are so many cool places to see and experience in the world, I think it’s important that people who do get to go to them, report back honestly. I’m so lucky to be able to travel so much so just want to help people choose the right destination for them. So much to see and do in this life!

[…] in mind that we head to the great city now with a regular to the Weekly Wander, Vicky Flip Flop.  What to expect on the streets of Tokyo tells you what to… well you get the […]