I’ve just spent the last six weeks in Mexico. From Mexico City to San Pancho to Guadalajara, Oaxaca City and Puerto Escondido, I’ve been around. During my time in this brilliant and colourful country there are a few things I noticed that I’ve never seen before, anywhere. To give you an insight into the beauty that is Mexico I thought I’d reveal the secret lives of Mexicans as never documented before.

So here goes, 10 things I saw in Mexico I’ve never seen anywhere else…

Spotted: Woman in Walmart, casually browsing the fruit and vegetables with her top up, boob out, baby latched on. How liberated, I thought. And why not? We’ve all come to Walmart to get fed after all.

I thought it was a one off, but over the next few weeks I saw more baby meal times than in the rest of my 30 years. In the street, at a festival, by the taco stalls. Turns out this is the norm in Mexico, as far as I could tell. I’ve never seen any woman and baby breastfeed so blatantly in England – makes me wonder where they go?

2. So many taco stalls 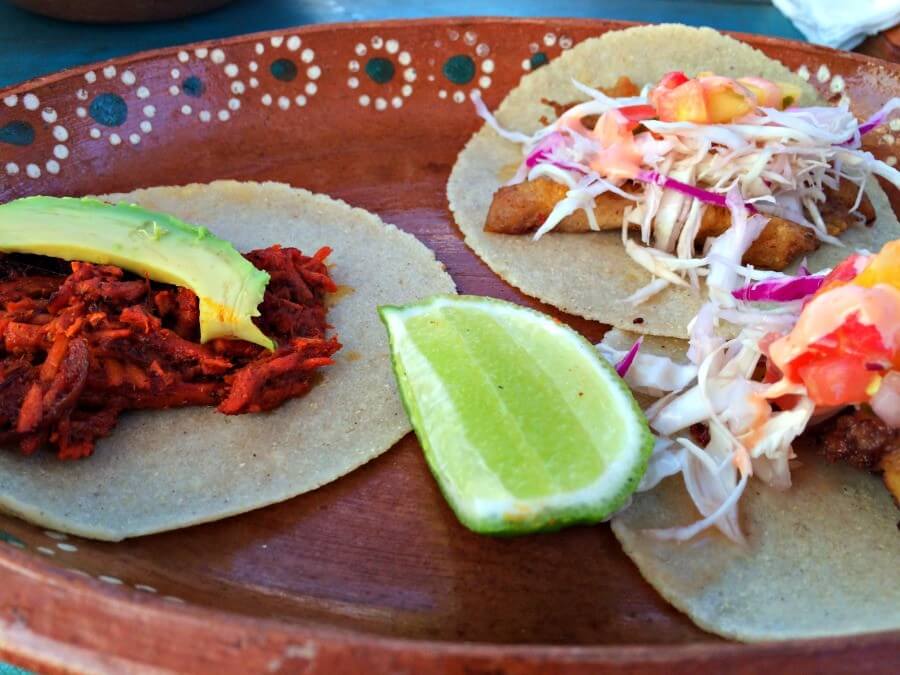 Didn’t even know I liked tacos before I went to Mexico. I’d always been more of a fajita kinda girl. They’re just so delicious and easy to find in Mexico, and eat. For 10 pesos (40p) you can get three tacos from a street vendor and fill them with what you like. Too good.

When the traffic lights turn red in Guadalajara the entertainers came out to play. They’d stand in the middle of the road doing their thing and trying to earn a few pesos to keep them going. I saw unimpressed drivers sitting through Batman, SpiderMan, gorillas and even a fire thrower, some complete with backdrop and music. 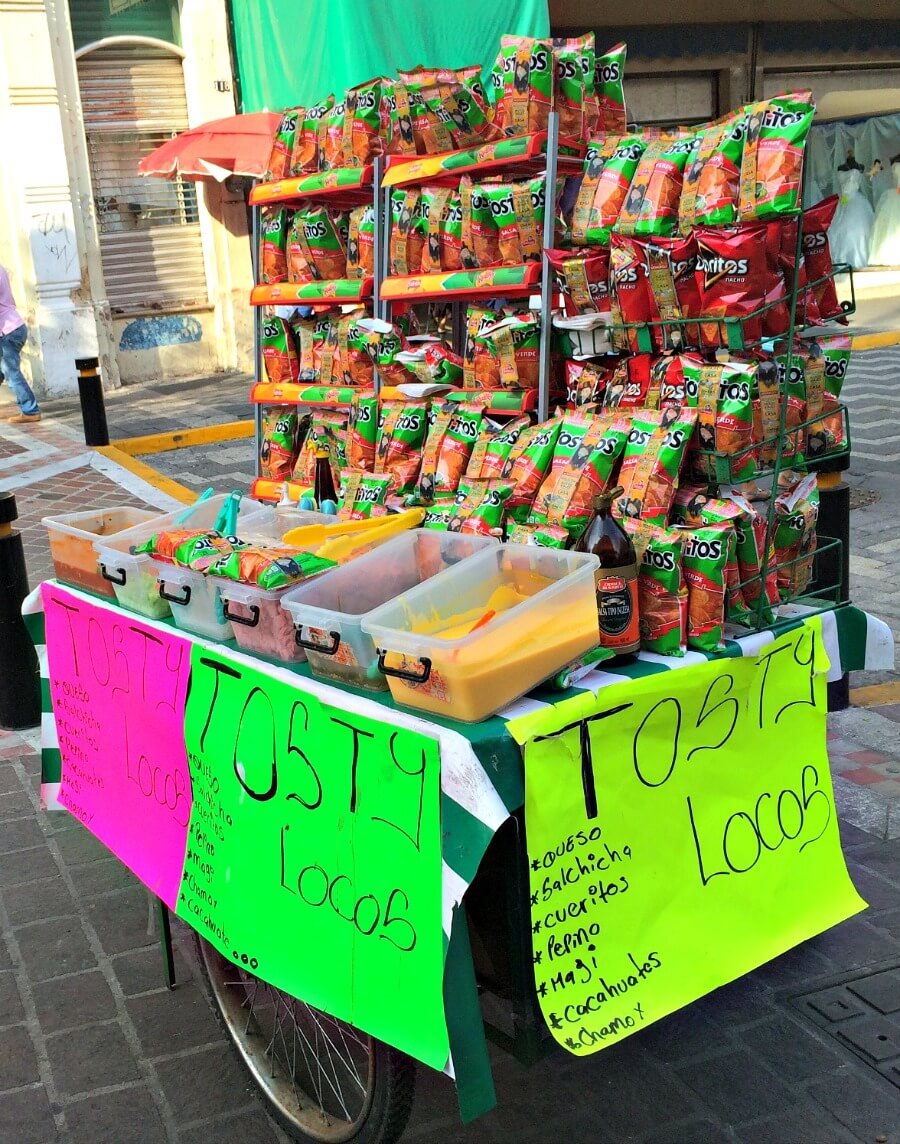 Buy a bag of crisps in Mexico and they’re as far from your average ready salted Walkers as you can get. Known as locos tostadas (crazy crisps) they’re served with the bag split down the side and with a whole range of sauces, chillis and toppings to pimp them up. Drenching them in chilli sauce and lime is the norm, but the possibilities beyond that are endless.

The amount of fat children in Mexico is shocking, particularly in Guadalajara. This is probably thanks, in part, to points 2 and 4. Apparently Mexico is now the fattest nation in the world. I went to a family festival in Guadalajara and saw massively overweight kids waddling along shovelling all sorts of fatty treats down, I even saw one kid crying for more ice cream when he had a huge sundae right in front of him. I wouldn’t normally comment on something like this but it was really sad. Wi-Fi, TV screens with films, games, Facebook, every episode of Downton Abbey ever, a packed lunch, air con, mega comfy seats: I was SO impressed with the Vallarta Plus bus from Puerta Vallarta to Guadalajara. It was only a few pesos for the 6-hour journey too. Much better than the Megabus in England!

7. Inability to not give directions

Mexicans are unable to admit it if they don’t know the way. They’re much more likely to make something up rather than confess they don’t know where something is, which can get you in all kinds of directional troubles. Trust me. Just take a good map. Dry humping and eating each other’s faces is just another fun thing to do on a park bench for Mexicans, or in a park bush if you’re a teenager. Hungover at breakfast and overlooking a plaza filled with benches, I was almost put off my chilaquiles (above) by the Public Displays of Affection. They’re a passionate race those Mexicans.

You can get 500 peso notes in Mexico. Seeing as I was taking money out in batches to avoid too many charges, I got quite a few of them during my six weeks. Most of the things you buy are less than 30 (water is 10 / a beer is the same) so hand over your crisp five hunner as payment and they’ll look at you like you just hock a loogied on their tacos. In fact, most shop owners will refuse to change it. Top tip for you: go to the OXXO stores, and stand your ground. Try to keep as much low denomination noteage as possible.

10. Such a good range of condiments Before you even start your meal in Mexico you’re given a whole range of condiments and snacksies to get your appetite going. As a self confessed sauce-oress this made me very happy, and I liked to try them all. Like a good girl I ate everything I was given, complimentary nachos and all. Have you ever seen this oh so pretty little hair nets? No, nor me. Go to Mexico and you’ll see them everywhere. The police women wore them under their hats, older ladies had them on the bus, younger girls as they walked down the street. If you want to be in style in Mexico, this is the look you need to go for.

12. Day of the Dead Festival Day of the Dead festival was awesome. It was a crazy few days and a lot of fun. I’ve never seen anything like it. If ever you get the chance to visit Day of the Dead in Oaxaca, do it!

13. So many weird drinks

I tried so many new drinks in Mexico. They have these things called Micheladas that you see advertised everywhere. I thought I’d give them ago and the first few sips were ok. Trying to get through the vat of beer mixed with tomato juice defeated me though. In some places you can get all kinds of things thrown in; prawns, meat, vegetables, you name it. Bleugh.

Horchata: a kind of rice water that I’d definitely recommend.

Mezcal: comes from the agave plant, a bit like Tequila. To try it is definitely not to love it. The beaches in Mexico were incredible. Long sands, blue waters and barely anyone on them, in San Pancho and Puerto Escondido anyway. I’ll really miss the surfing, sunbathing and cocktail sipping possibilities I made the most of while I was in Mexico.

15. The most amazing hot springs

Did you know Mexico has THE most incredible hot springs? Take a look at these Mexican hot springs for starters.

Have you ever been to Mexico? Did I miss anything?

The Best Things to Do in Guatemala, from 12 Travel Bloggers
← Previous
Introducing the Animals of Belize City Zoo
Next →
Click here to cancel reply.

Great post!!! I'm so excited for my trip now! Vicky, what time of year did you go? I'm trying to plan a trip for August. I wish I could get the time off for dia de los muertos but sadly not this year! Do you have any recommendations for August? I've decided to go for the whole month.

Thanks Sarah, I went from the 7th October for six weeks. Loved it. I've never been in August I'm afraid – I guess it will be the same but hotter! You can cool off with a margarita – nothing to worry about there!

Keen perception on some of those things, for sure! I'm headed to San Miguel de Allende, (4th trip to Mexico!) in March. I love this country so much because every trip I have taken has been to a different region, and each state is very different and unique.

This post really made me crazy on Mexico. I love to visit this place. You have shared a great information. Loved it.

Thanks Jones! I really, really loved Mexico and would definitely recommend it to anyone. Go, go, go!

I'd looove to go to mexico! So when I eventually do, this is great insider knowledge. Some surprised me (fancy bus & fat kids) & love their breast feeding mammas!

Yeah, it’s a pretty random selection of points I noticed but I thought it my duty to let everyone know! Let me know when you eventually do go – I’ll have lots of tips for you :)

This makes me want to go to Mexico right now! I grew up in southern California about 2 hours away from the border, but somehow never made it there.

I'd love to see the Day of the Dead festival in person, and sign me up for all those tacos and condiments! The beaches don't sound too bad either. :)

Ah you need to go! So close! Book a trip for next Day of the Dead Festival – you have a year to plan!

Hi, I’m Vicky…
I’m a 30-something adventurer from England. In 2014 I left my job to travel the world as a digital nomad. Since then, I’ve travelled to over 70 countries and been to over 60 different festivals. England is home again now (the south coast) but I still love a good holiday!