Last week I did a five-day road trip along the Pacific Coast Highway from San Francisco to LA. If you’ve been following any of my social media updates you’ll have seen that I absolutely loved it and had a brilliant time. It’s actually the second time I’ve driven on that stretch of the Pacific Coast Highway, although last time I was a passenger all the way.

It’s much more fun when you’re in control.

Doing a road trip in California is top of many people’s bucket lists so if ever you get a chance to go you need to make sure you’re properly prepared by following my top tips for a driving the PCH (as it’s known by the cool kids). I wasted a good 45 minutes trying to get out of Oxnard between Santa Barbara and Malibu because the stupid sat nav was sending me round in circles. That was 45 minutes I could’ve spent sunbathing on Malibu Beach, which I never got to do.

If you can, bring one with you from home that works well and you’ve got to know your way around. Hiring a sat nav is around $70 a week (£40) so if you can bring an international one from home, or borrow one, you can save quite a bit. You need one that lets you avoid highways, and updates based on local traffic news to get the most from your USA road trip.

I tried to use Google maps on my phone but because I didn’t have the right holder for it in the car and had never really used it for driving before it was just too distracting. Make this a priority, trust me!

2. Sort a playlist before you go

And find out how you connect it to the car. On my recent press trip with Virgin Holidays we were swapping cars as we went so one day I was in a Mustang with a USB connector which was perfect for connecting my iPhone, but I didn’t have any playlists, only albums.

That night I spent an hour sorting all my music out.

And then I got in the Chevrolet Camaro convertible and there wasn’t one, nor did the Bluetooth function work. I know, no one would want my life.

When you book your car hire find out what the connection point is and cover all bases (CD, USB, Bluetooth).

3. But listen to the local stations too

Having said that, make sure to mark out some time to listen to the local radio stations as you drive through. Religion FM was a particular favourite of mine, as was Bob FM, you can’t beat hearing a brilliant but unexpected song on the radio as you’re driving along. The one that stands out for me was Fleetwood Mac’s Go Your Own Way, keep an eye on that speed dial! 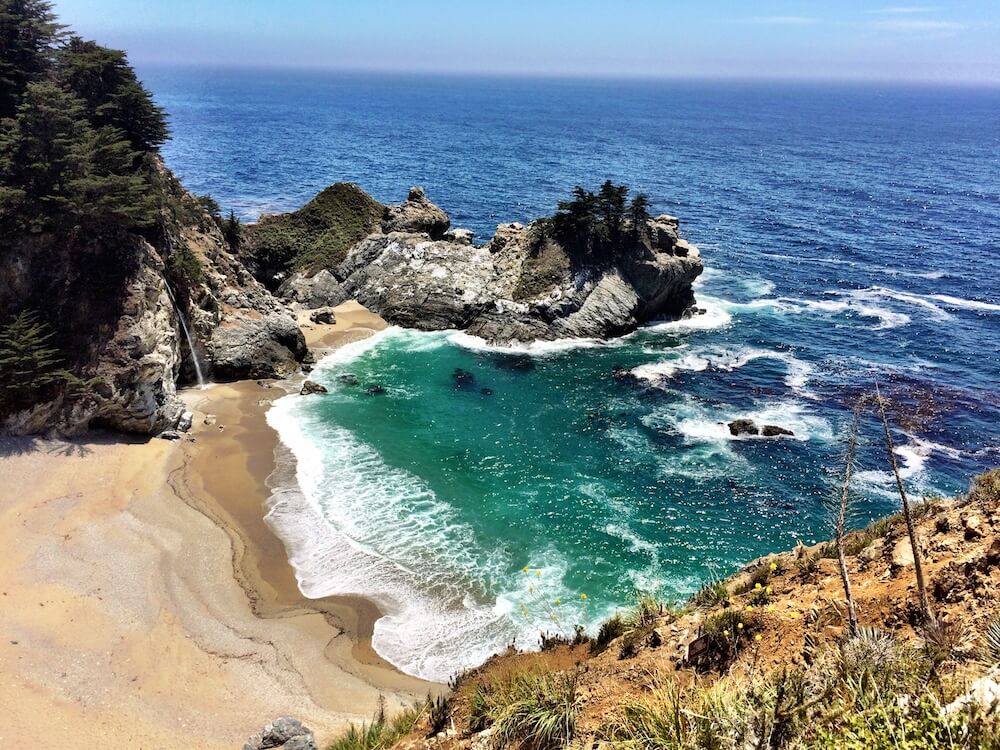 There’s so much to see along the Pacific Coast Highway, every 5 minutes you’ll see an incredible vista point to stop, so do it. The speeds along the route allow you to make split second decisions and pull over to take a look and take a photo.

It depends how much time you have as to how much you want to take advantage. It took me ages to drive from Big Sur to San Luis, just because of views like the one above over McWay Falls in Julia Pfeiffer Burns State Park.

We turned off at the sign for ‘Elephant Seal Beach’ and just five seconds later and running as far as the eye could see down our right hand side hundreds, if not thousands, of the blubber weights were just strewn across the beach. In fact you could barely see any sand for the seals everywhere. I do a very good impression of a seal, that you’ll just have to ask me for, if ever I meet you in person. The seals loved it and we had a right old chat. My fellow seal admirers looked at me a bit strange though – jealousy.

The sun was setting and some of the seals were frolicking by the sea, while about 20 of us looked on kind of disgusted by the big blubbery mess hardly able to move their own weight, half fascinated by how colourful their leathery skin looked in the sun. They were

You can’t actually go down and see the seals close up, but you cgot a great view across the viewing platform. Look, see… 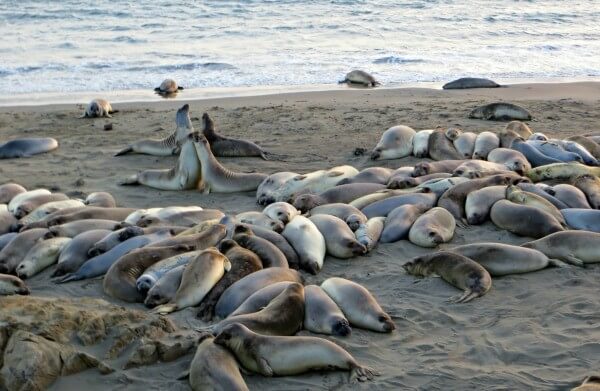 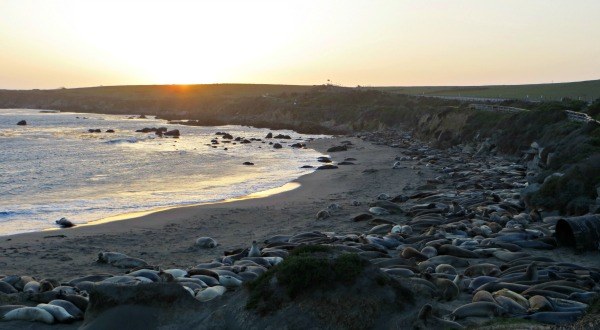 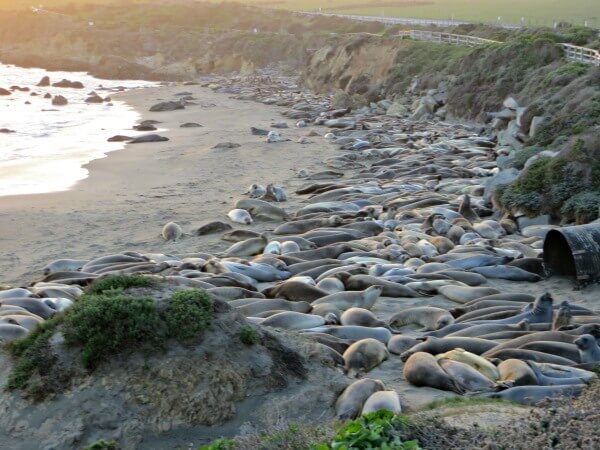 There’ll be all kinds of people on the Pacific Coast Highway – inexperienced, speed demons, teenagers, oldies, all sorts. Just be nice, respect their driving and match it to yours. Let people in and out, slow down, speed up, as needed.

As I’ve said the road from Big Sur to San Luis was incredible, it was also windy and only had one lane so I knew I was a bit slow. As the cars lined up behind me I just pulled into a vista for 2 minutes for them to pass as they were obviously in more of a hurry than me to see the route, then I just got back out again without the pressure of feeling like I needed to speed up.

The fun is in the ride. The views are incredible so make sure to take as much time as you can to do the route, but keep an eye on the clock if you have somewhere to be or hotel reservations. I honestly do not know where the days went. There was so much more to see and do than I managed to fit in.

In the US you drive on the right so for the best views be close to the cliffs as you travel south. Check out my video above of some of the route from Big Sur to San Luis Obispo to get an idea of what to expect.

Make sure you have some unscheduled time in your itinerary. There are so many little towns and wineries along the way you’ll want to stop off and have a look. The day I was on the Harley from San Luis to Santa Barbara we stopped at Avila Beach to go whale watching (saw loads) and then again in Santa Ynez, just because it looked like a cool hick town, filled with unique shops, museums and bars.

The road between Carmel By the Sea and San Luis and then Oxnard to Santa Monica are only one lane so if there are a few of you it’s easy to drive in convoy. You can just take the lead from the front car as to where to pull in, and change who leads throughout. Even if you don’t all manage to fit in one vista point, you’ll find another one in a few minutes and you can walk back. I’m a cautious driver and I found myself doing the speed limits naturally, before I knew what they were. Some of the other guys I was with apparently found them a bit slow but they were perfect for me. There’s no need to be scared driving the Pacific Coast Highway, with one caveat, if someone else can do the freeway between Santa Barbara and Oxnard, I’d recommend you let them.

Let me know if you need any more details on that particular experience!

There are motels and towns lining the route so if you just want to see where you end up go for it, but if like me you want to know where you’re sleeping that night, booking is fine too. I’ll be writing more about where I think you should stop on the Pacific Coast Highway, but here’s where I stopped this time.

I drove from Santa Barbara to LA in a Chevrolet Camaro Convertible. It doesn’t get much cooler than that. Driving through Malibu was one of those moments I want to remember forever. Feeling the wind in my hair and seeing the view in front of me and then behind me in the rear view mirror was stunning.

If you’re going to do it, you might as well do it, right? And if you have a motorbike licence I’d definitely recommend you get a Harley Davidson, although if you have that licence under your belt I presume that wouldn’t need to be said.

I rode pillion from San Luis Obispo to Santa Barbara on the back of a Harley, my first time on one of the beasts, and the feeling I got would be hard to beat.

If you want to take the scenic route and don’t want to hit the big freeways all the time you need to plan your route. This is where my point 1, the good sat nav, comes in. When you’re on route 1 it’s fine but as the number of lanes increased so did my adrenaline and nerves. Not good.

I drove a lot of the route by myself so there was no time for snacks, or for many photos. Life is mroe fun with friends so bring a passenger along and give them responsibility for both.

Any questions? Let me know…

Find out more about my Pacific Coast Highway Road Trip