If you’re having difficulty choosing between hostels in New Orleans, you’ll find your answer here. I stayed at five different hostels / cheap hotels while I was in NOLA. I was there for three weeks and just thought I might as well try a few out while I was in the hood. 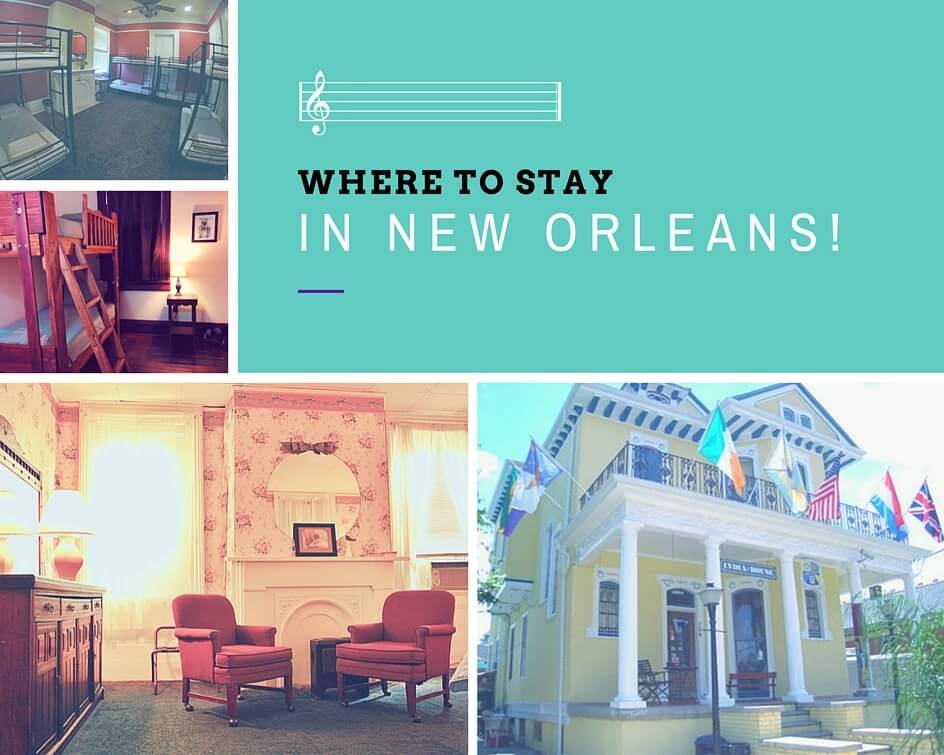 All the hostels were good for something, although as you’ll see I definitely had my favourites.

– All photos from HostelWorld, because they’re better than mine!

The fun one – Auberge NOLA Hostel 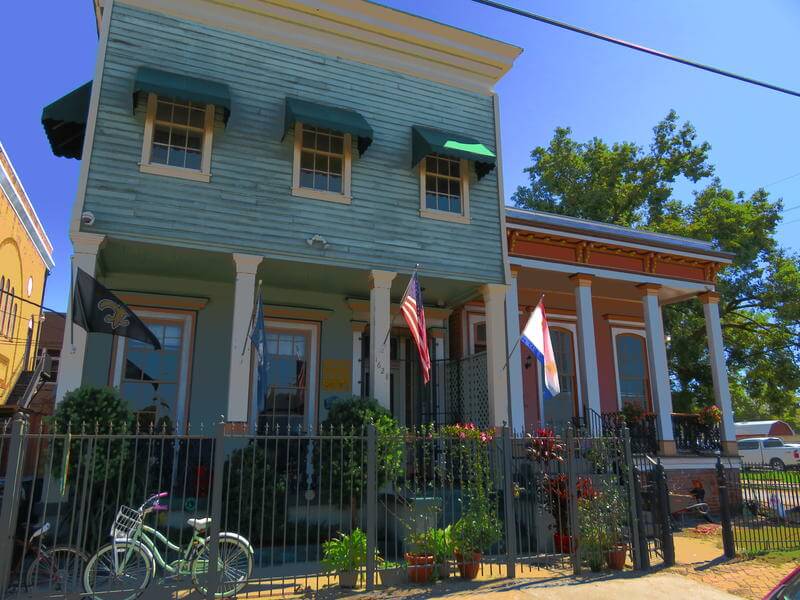 If you’re looking for somewhere fun and friendly to make the most of your time in New Orleans, you need the Auberge NOLA in your life. It’s one of my favourite hostel experiences of all time, seriously. Located in one of the old antebellum Louisiana-style houses, it’s more like a house than a hostel. There are three social spaces, depending on whether you want to play computer games and instruments, do some work or read, or you want to get social and make some friends while you’re in the hood. 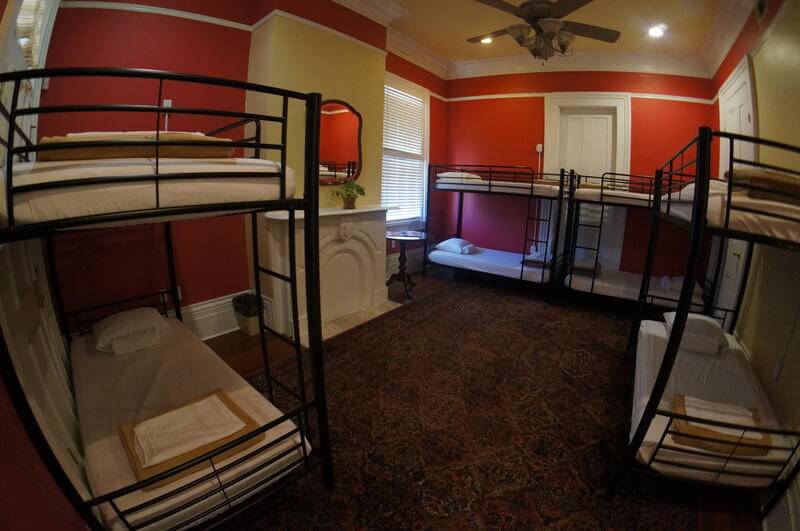 This is the best hostel in North America as voted for in HostelWorld’s annual Hoscars – can you imagine how good you have to be to win that accolade?

The fun staff are a big part of the cool atmosphere here – every night one of them will take you out to a different part of New Orleans so you can make the most of the nightlife there rather than wandering around aimlessly on your lonesome. I ended up riding a mechanical bull on our night on Bourbon Street. There’s plenty of space in the hostel rooms here, the bathroom is as good as your one at home, or better in my case from London, you get a free breakfast and there’s a great outdoor area where you pay just $10 for free beer from the cooled keg all night. And, to add to all that, it’s located just off St Charles Avenue, right between the French Quarter and Magazine Street, in among the incredible houses of the area.

Oh, and there are pet chinchillas there too.

– Check out the Auberge NOLA on HostelWorld or on Booking.com

The peaceful one – Madame Isabelle’s House 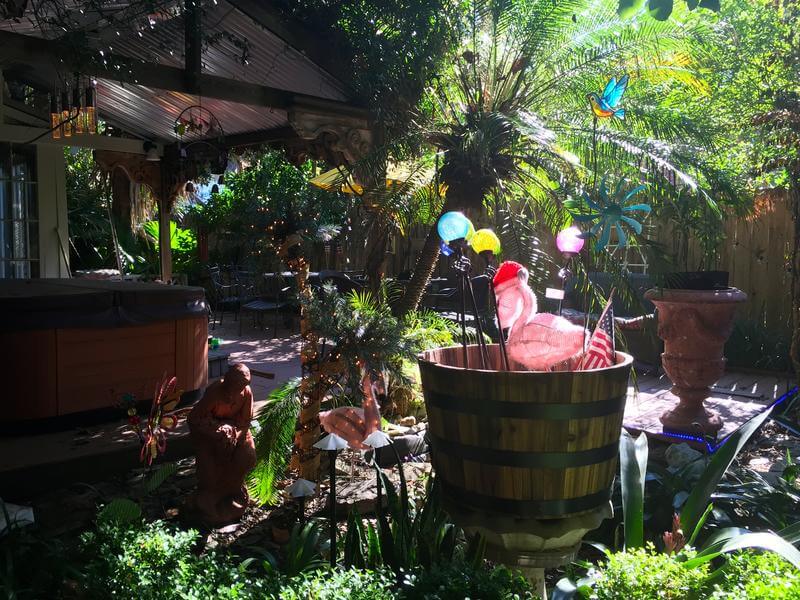 Madame Isabelle’s was an unexpected pleasure. My friend Cailin and I just needed somewhere for two nights at the end of the trip and had left it right to the last minute. I chose Madame Isabelle’s because it was just off Frenchman Street – the cool part of the city, and we booked a private twin for the night she was there and I stayed in a bunk bed the next one. As soon as I walked in to the hostel it just felt right. Out the back they had a hot tub and sun loungers, set in among a garden jungle. Climb the stairs and there was another social area, this time with tables and chairs. Perfect for an on the road travel blogger like me to get some work done. There are two lounges, as well as these outdoors spaces, and the most incredible dining area you’ve ever seen in a hostel. 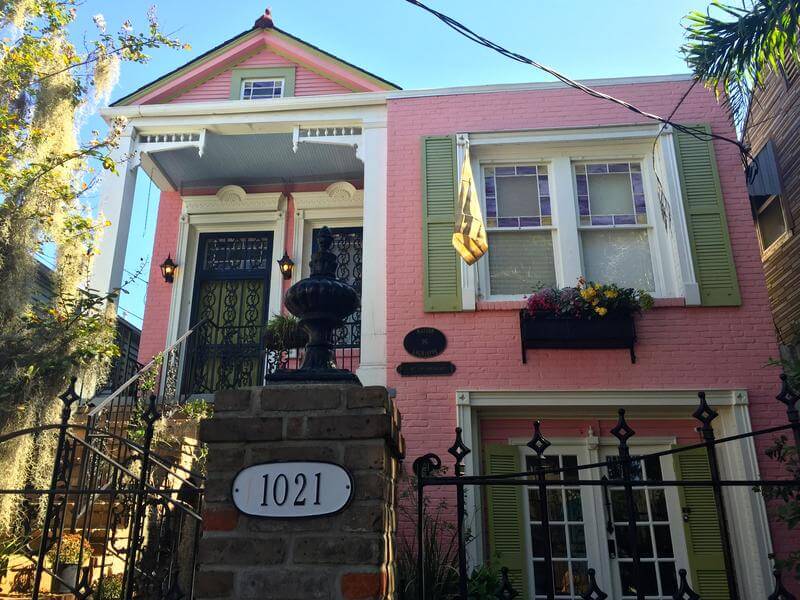 Our room was clean, comfortable, decorated nicely and with a lovely bathroom. I was kinda dreading moving into the bunk room after but honestly, it was one of the best bunk rooms I’ve stayed in. There was loads of space, a really nice bathroom, quiet doors (!) and proper wooden beds that didn’t creak at all. Even though I had to be up at 4:30am for a flight, which usually means I don’t sleep, I was out of it by 11pm and slept all the way through till my alarm.

Breakfast here was standard, with really good coffee you could drink all day outside on the veranda.

The cheap one – India House Now, this is one of the weirdest hostels I’ve ever stayed in. The walls of the entire place were covered in writing as if we were in some sort of asylum or prison. It wasn’t ‘cool’ or ‘arty’ in the slightest, just kind of trashy and skanky. Their photos on the site don’t seem to show it and unfortunately I only captured it on my Snapchat so you’re just going to have to take my word for it.

We’d booked it because we were in New Orleans for the French Quarter Festival and everything was so expensive. This was a little out of the way but still on the street car line up by City Park and was cheaper for a four-bed dorm for the two of us privately, than a hotel elsewhere. So we went for it. The other problem was that there was one bathroom for the whole floor, of about 20 people, with just one other bathroom downstairs. The whole place felt like some sort of skag den to be honest. It was ok, especially for the price, but I wouldn’t recommend it as a first choice.

– Check out India House on HostelWorld Site 61 receives the accolade of best hostel bathrooms ever. It was like having your own home bathroom, a private room with plenty of space a good shower and sink, and there were loads of them, so you never had to wait.

The wooden beds were super comfy here too. I’ll admit, after getting back from a week in St Kitts and having my own huge private rooms there I really wasn’t looking forward to getting back into hostel beds again, but I slept soundly all five nights at Site 61, despite being in a 6-bed room. There were some cool social spaces here – a nice kitchen and two lounges and it had a pretty chilled atmosphere. There was also an outdoors area but seeing as it pretty much pissed it down the whole time I was here I didn’t use it.

The location wasn’t the best, but it was a three minute walk from the street car on Canal Street which got to the French Quarter in a scenic 20 minutes. Or you could go the other way and be at City Park in 10 minutes. It was good for the Jazz Fest, which is what I was around for.

Lockers here are downstairs which I think is best in hostels – stops all the clanging when people come in late.

As well as the best bathrooms, Site 61 also had the best breakfast with bagels, porridge, cereal, coffee and juice. There were some cool people working here too, they even made a veggie dinner on the last night. Brilliant!

– Check out Site 61 on HostelWorld or on Booking.com

The one with the pool – St Charles Guest House 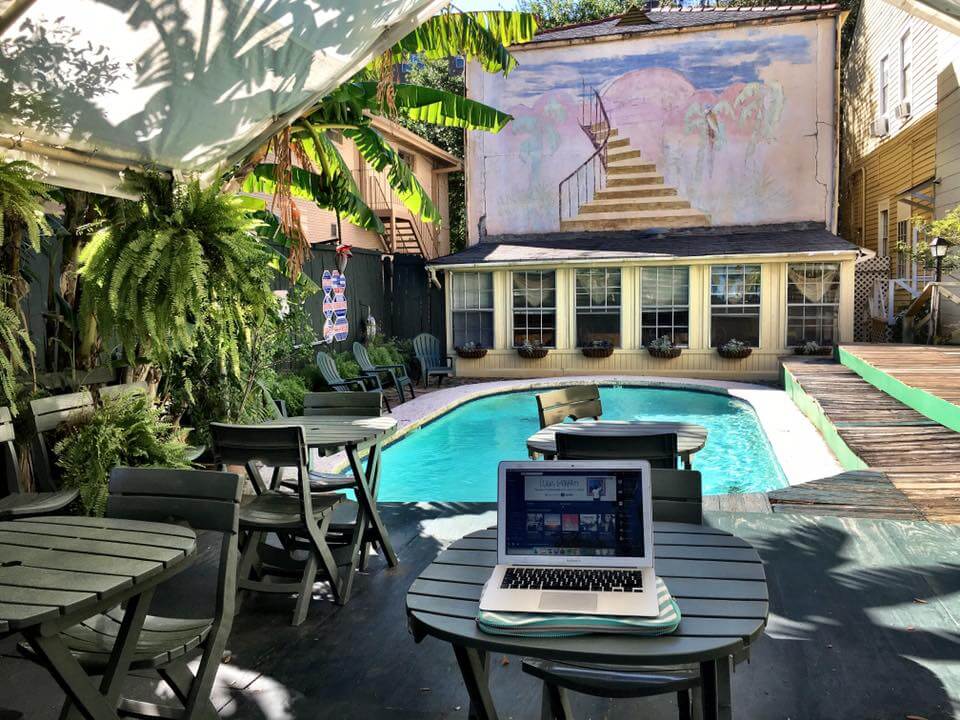 As the name suggests, the St Charles Guest House is not your hostel experience, but, if you’re travelling in a group it can definitely work out at hostel prices.

They have private doubles with private bathrooms up to multi bed rooms with shared facilities, to suit your budget. I stayed in two different rooms while I was here – a huge double with quaint New Orleans decor, and then a two double bed room on the upper floor too. Both were very traditional, which I liked.

As they say, it’s ‘like staying at your Grandmother’s house’. 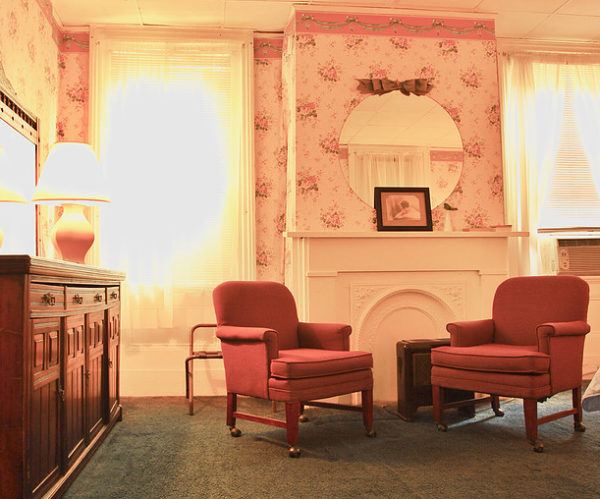 There’s a pool here. A definite plus if you’re planning on visiting New Orleans in the sunny season. The biggest seller for me was the patio area – I sat and had a good afternoon of work while basking in the reflection of the water.

Breakfast is served here – a good selection of pastries, breads and muffins for you to help yourself to. And there’s coffee and tea served all day long.

The St Charles Guest House is in a great location, right in between the Magazine Street area and the French Quarter too. It’s just a few minutes walk from all the shops and bars of St Charles Avenue, and about five from my favourite place to eat in New Orleans, Hivolt Cafe.

So which New Orleans hostel to stay at?

In short, if I was going by myself I’d stay at the Auberge NOLA Hostel, no doubt about it. The staff, location and vibe were perfect. And if I was with a friend, or wanted more of a chilled trip, it’d have to be Madame Isabelle’s, it was so chilled and pretty there – hard to believe it was a hostel. And if you want the real New Orleans olde charm, go for the St Charles Guest House.

Let me know if you need any more advice on which hostel to book in New Orleans, I feel like a semi-expert!

I received four nights at Auberge NOLA in return for a review, which you can see above, it was the most fun hostel though, without a doubt! And St Charles Guest House invited me to stay too.

3 Months in America: What DID I Get Up To?
I Was Picked Up By a Cop in Memphis

7 Fun Things to Do in Hobe Sound

My Big Day Out at Daytona International Speedway

What to Do in Tampa