Touring the Bayou Rum Distillery aka My Tough Life

While in Lake Charles I had the opportunity to work my way round the Bayou Rum Distillery on a tour. I love rum. Cuban rum, Belizean rum, any rum’ll do me, but this Bayou (bye-you) was something a little different. Cleaner, fresher, maybe it was that alligator bite. Established relatively recently in 2011 the Bayou Rum Factory is open to the public daily, to show off their award winning blends. And they have won plenty of them, from as far as Spain. Give it a year or two and Bayou will be the standard worldwide. Bet you a dollar. In February the distillery won the Louey Award for the tourism attraction of the year from the Louisiana Travel Promotion Association. So yeah, it’s good!

The Bayou Rum tour starts with a video showing exactly why this spot in Louisiana is just perfect for rum production, even more so than the usual Caribbean. This is mainly thanks to the local sugar plantations, the weather, and the marshy ground.

Why hadn’t they done it before?!

That’s exactly what the Bayou Rum Distillery President, Trey Litel, was asking himself when he decided to change that, alongside his brother Tim and their rum aficionado friend Skip Cortese.

He led me on the tour round the factory and it was obvious to see he was super passionate about his product being the best. He was fresh off the plane from an exciting meeting in NYC where it was confirmed distribution would extend way, way, beyond the few states it was currently in. It’s on its way to England, I’m telling ya. He knew that instead of shipping all that delicious Louisiana sugar cane and resulting molasses (above) out to the rest of the world it was time for someone in the state to get in on the rum game, a $2 billion industry. Tim and Trey’s arrival on the scene was announced with a huge party, which by the sounds of it, everyone in the state came to, drawn in by the two free drinks but staying for the unique atmosphere and elegant elixir. The Bayou Rum Distillery has bottling parties every now and then where you can apply to come along and get in the spirit by spending the morning and afternoon somewhere along the rum bottle production line. In return you’ll get lunch, a t-shirt, a bottle of rum, and most importantly, the glory, solidified in a signed certificate. Interesting fact for you: the bottles are actually washed inside with rum, anything else would alter the flavour. Makes sense! The 24-foot high, 36,000-square foot distillery smelt incredible – thanks to all that Louisiana sugar cane boiling away. The huge picture decorating the wall reminds workers and visitors of how the sugar cane used to be collected, by boat and waterway. Now there are a few more machines involved in the process, but the story here is all in the local Louisiana method, process and ingredients. Their rum is still made in a traditional copper pot and the ingredients all come from inside the state – the sugar cane as close as New Iberia, just up the I-49 Highway.

The kegs and how to get the blend right Kegs are bought in from the Bourbon factories up in Tennessee, as I’ve recently learned you can only use them once to make that. It’s the oak infused taste that’s so popular for the Bayou rum.

You see the way they’re all stacked up? That’s a method used in wine production. The youngest rum is on the top, down to the oldest at the bottom. You siphon the rum you want from the bottom until it’s half empty and then fill it with the barrel above. That way the rum tastes the same no matter what the harvest.

I met the official blender, Reiniel Vicente, who’d been making rum in Cuba with his father, way before he was legally allowed to drink it. I also got to meet the guys in charge of the machines, who started getting twitchy when we were stood in front of the control panel. Must not touch buttons that don’t belong to me. 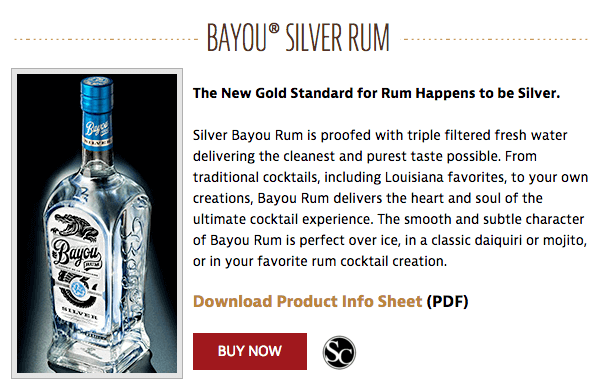 And of coure, the tour finished with the official tasting, all four of them – Bayou Select Rum, Bayou Silver Rum, Bayou Spiced Rum, and their popular Bayou Satsuma Rum Liqueur.

That Satsuma one, oh yes. I’ll be searching for that when it comes to cocktails in New Orleans this weekend!

Tours round the factory are free!

More things to do in Louisiana

My Top 7 Favourite Food Experiences in New Orleans
7 Awesome Things to Do in Lake Charles, Louisiana

6 Tastiest Places for the Best Breakfast in Boracay

12 Things You Have to Do at Coachella Festival

7 Essential Tips for Hiring a Car in Florida (We Could've Done With!)