We felt it our duty to seek out out the best restaurants in Rovinj, and then eat as much as possible. Not in a gorgey kind of way (‘cept that banana split), but in a classy ‘your finest seafood platter please sir’ kind of way. My friend Chloe and I were in Rovinj for my birthday and seeing as there was no sign of nightlife, thanks to it being October and the end of season, we went all out on the foodie opportunities.

So tried and tested, here are the BEST places to eat in Rovinj sampled over an intense four days of pure indulgence. 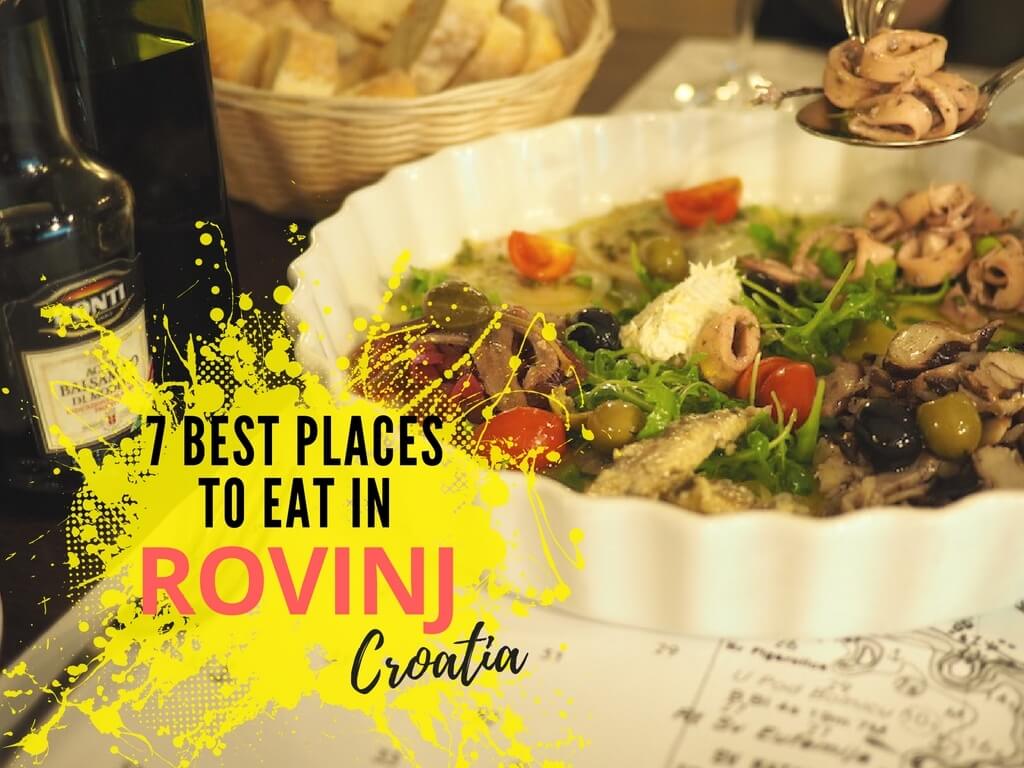 The Best Restaurants in Rovinj

1. Dinner at the Adriatic Hotel Our first night and we we checked into The Hotel Adriatic for dinner. Handy seeing as we were shattered from our early start that morning, and we were staying there too. Just a short journey down three flights of stairs and we were there.

We ordered the seafood platter for start – presentation was top notch. Scallops, sardines, sea bass carpaccio and, the piece de resistance, the tuna steak. I would’ve just eaten a whole plate of that, it was dee-lish.

For main I had the seafood bouillabaisse you see above while Chloe went for the steak fillet with salad. I was nervous about ordering the bouillabaisse, in case it was just little bits of seafood in some sauce, as I’ve been presented with in restaurants before, but as you can from the Hotel Adriatic – not the case. And then for dessert – may have been a little tipsy on the wine our waiter Igor was pairing – but we decided to order the dessert platter. We thought it would be a ‘little bit of this’ and ‘a little bit of that’, a good way to try a few things perhaps. What we got instead were full size desserts, x 4, each. A big afternoon tea style plate rack appeared before us featuring macarons, tart citrons, chocolate strawberries and cheesecakes.

Our waiter here Igor, was the best waiter, by far, of any restaurant we went to.

Oh and on that, we found the service in Rovinj quite abrupt, with everyone except for Igor. It wasn’t a problem, especially when we realised it wasn’t us, it was them, but just so you know. 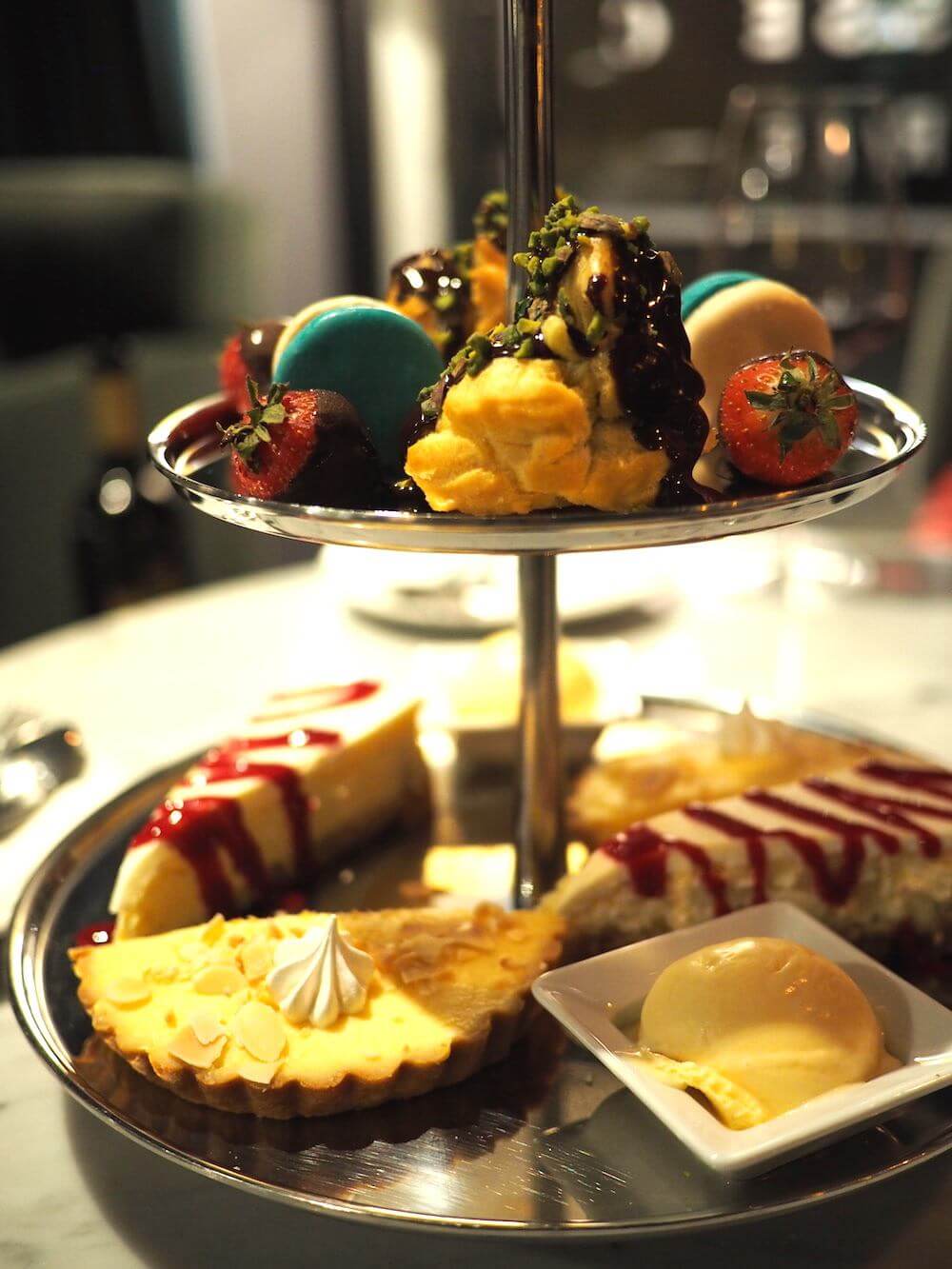 The Hotel Adriatic Restaurant was fancy. It was the first time I’d ever eaten my dinner from an armchair but it was surprisingly comfortable. Oh, also, when we sat down Igor bought us a box to put our handbags on, which was nice. Guys. Seriously. The starter seafood platter here was absolutely in-credible. In between mouthfuls Chloe and I were trying to work out if we could legitimately go to Rovinj for weekends, just so we could go back to Kantinon. Yep, yep, decided that would be a great use of time. See, look ^. Lightest seabass carpaccio ever, octopus LIKE I’VE NEVER TASTED, calamari LIKE I’VE NEXT TASTED, epic salty anchovies and all dowsed in their house blend of olive oil. Honestly, if you’re one of those people who ‘doesn’t like seafood or fish’ go there and your mind will be changed forever.

Usually I’m not keen on either calamari or octopus thanks to that whole rubbery thing they have going on but jeez, this stuff was fresh out of the ocean and the chefs at Kantinon knew exactly what to do with it.

Enough on the seafood platter…

Somehow for mains I ended up with beef gnocchi, despite ordering the game version. I didn’t grumble. I’d been torn between the two anyway. The portion was huge, and to be honest, I won’t order it next time, I think fish is the way to go here.

Chloe had the traditional local pasta, Pljukanci, with truffle oil, ham and rocket. Total food envy from me. Dessert for me was creme caramel with cherries on top, and a huge portion too. I’d recommend you get one to share, but somehow, I managed to finish it all :).

This was my birthday meal so we went all out and had the wine matching too. Wine is served in smaller portions in Croatia, and I never thought I’d say this, but I liked it. We got to try more, drank less, but still somehow still managed to get the buzz, and fall asleep as soon as we got home. I ate all that. Well, bar one half of banana Chloe helped me out with.

There was a little misunderstanding when I ordered. I’d asked how many scoops the large was, seeing as it was my birthday, and when she replied two, I didn’t realise she meant ‘two’ banana splits. She must’ve thought I was a right fat whacker when I cheerfully replied that I’d definitely have that one then.

Well, if she didn’t when I ordered, she definitely would’ve after seeing me devour the entire thing. It was my birthday though… 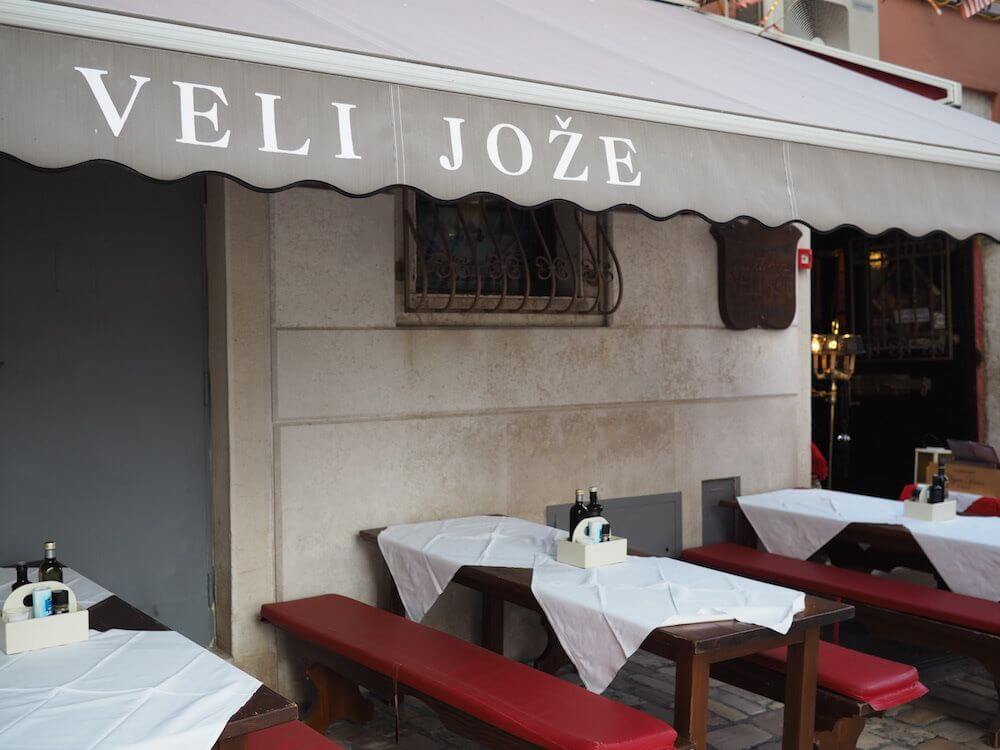 Veli Joze was a wild card. It was cold, we were hungry and I think it might’ve even been raining. We wanted somewhere close to where we were staying at The Adriatic Hotel.

Approximately 50 steps away we came across the Veli Joze. I was drawn in by the red glow coming from the door. With the sun gone for the day and the cold and rain setting in, it was the most inviting place around. 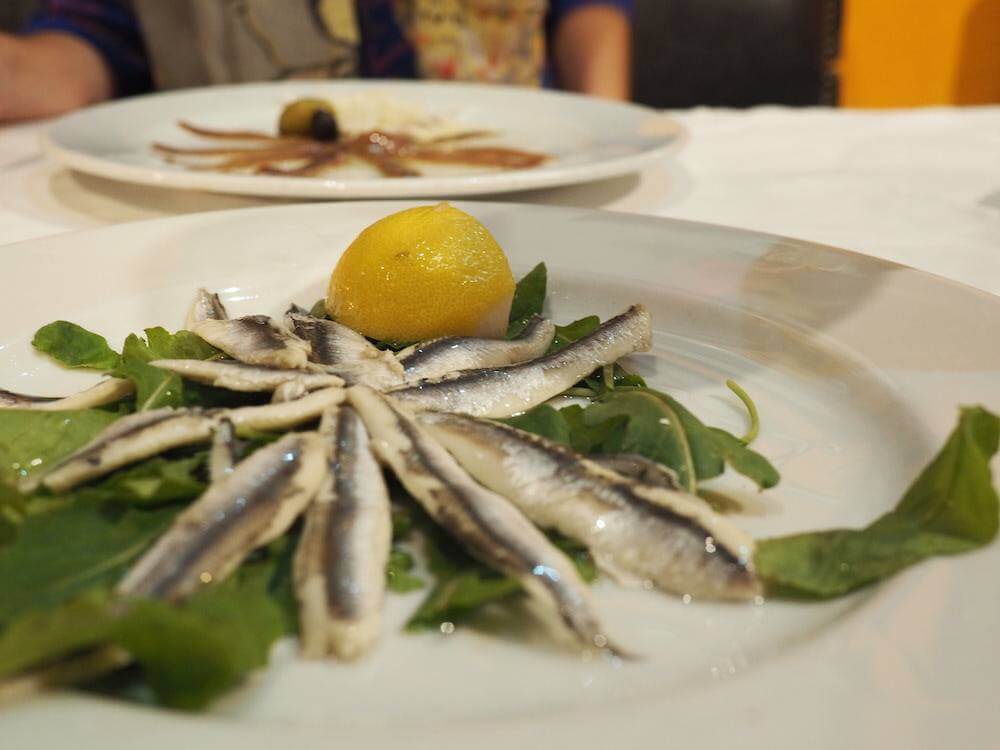 We went for a plate of salty anchovies for the starter, and a plate of the lemon marinated ones too. As we realised that week, we’re both pretty much obsessed with anchovies and we’re now planning on going to the anchovy festival in Italy, sometime in our lives. We went for the prawn and fish platter for main, just so we could try as much as possible. It came with spinach and potatoes, although thanks to the amount of fishy goodness we had there was no space to be filling up on carbs.

You can’t see it too well on the photo but we had two big filllets of super fresh fish in Veli Joze, as well as the squid and prawns. Salivating at the memory. Definitely one of the best restaurants in Rovinj. A few metres the other way from the Hotel Adriatic and we found the Sidro Restaurant. It was our final night in Rovinj and we needed something special to finish off what had been an incredible four days of eating our way around.

Fish platter for starters, as you’ll have worked out was the usual for us. This time we had anchovies, yep yep, but also tuna pate and cuttlefish too, just to mix things up. Along with the bread and oil which is totally irrresistable in Rovinj – fresh, light, tasty – it was the perfect starter. 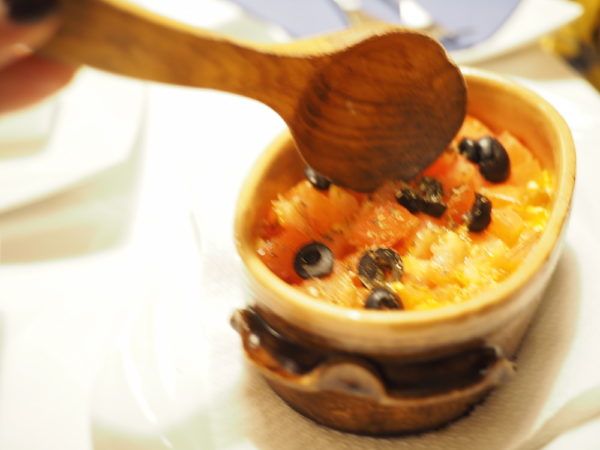 For mains, we went a little different and ordered Ćevapčići – which I learnt from my last trip to Croatia, was the traditional minced meat sausage served here. These went perfectly with the baked feta we ordered, as you can see in that blurry image up there. And then we had those huge gambas on the side between us too.

Seeing as it was October this was another chilly night and Sidro Restaurant was the perfect cosy place to spend it.

6. Breakfast at the Hotel Adriatic You get breakfast included in the cost of the room at The Hotel Adriatic. So after four breakfasts there, we found out what was what. The birscher muesli was our clear favourite, along with a croissant and a dip of the bread into the aforementioned homemade olive oil. Gawd, that stuff was good. 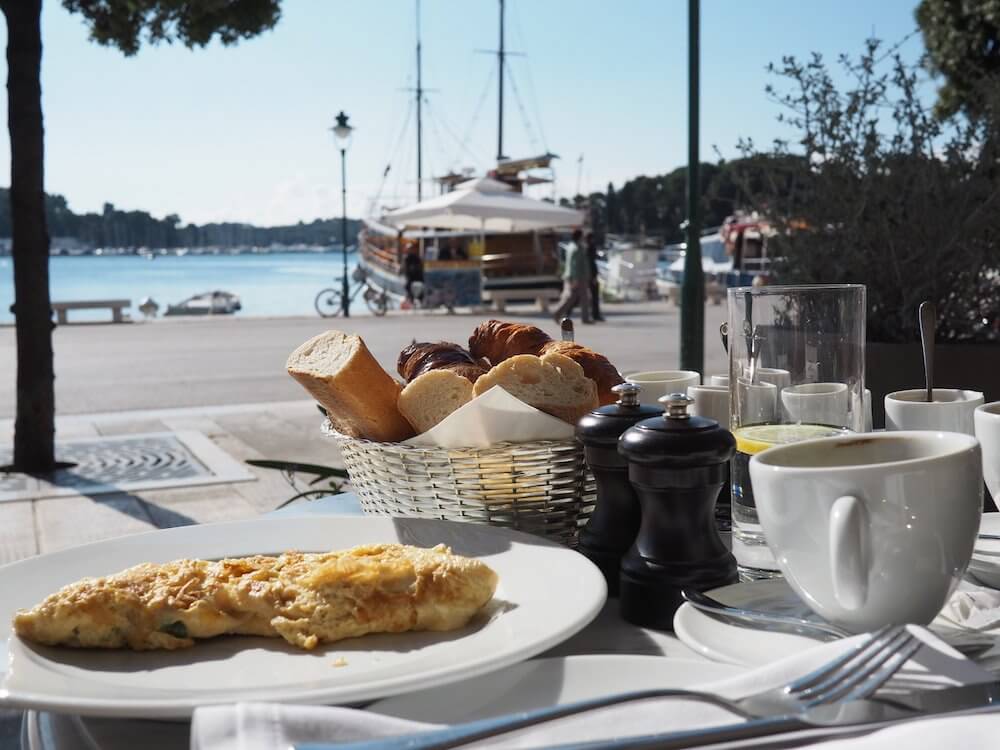 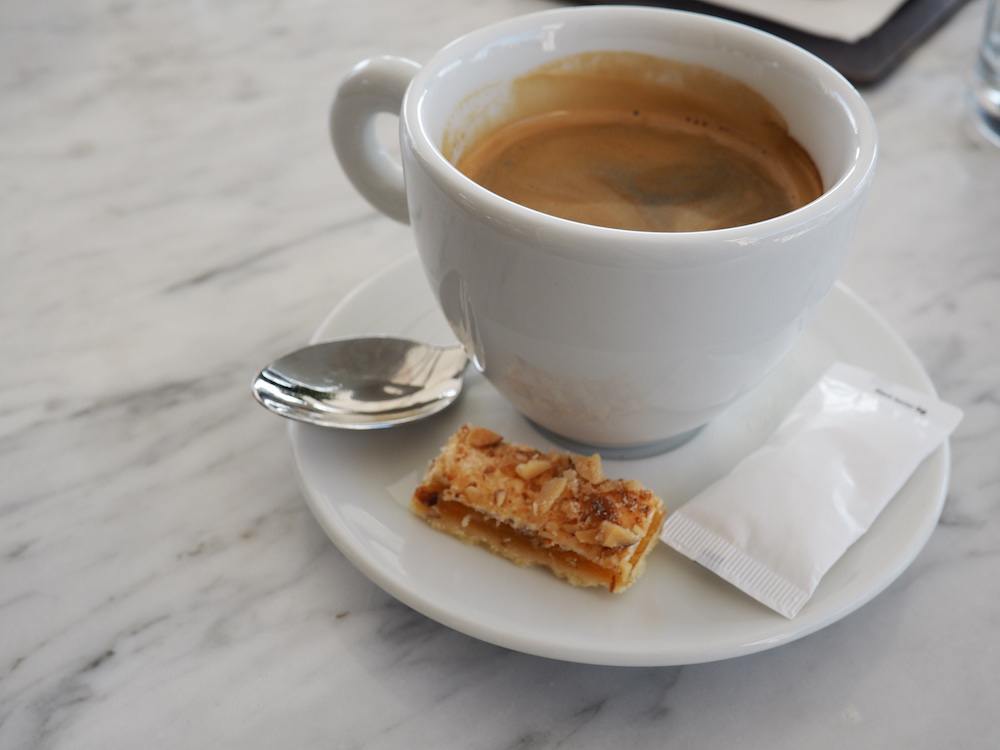 We realised after the third day that you could actually order the breakfast outside, which is what we did from then on. Just munching on our croissant basket while Rovinj went about its day. Perfect.

Coffee at the Hotel Adriatic was yum, and seemed to be unlimited too, with a little biscuit on the side (if you asked the right person). 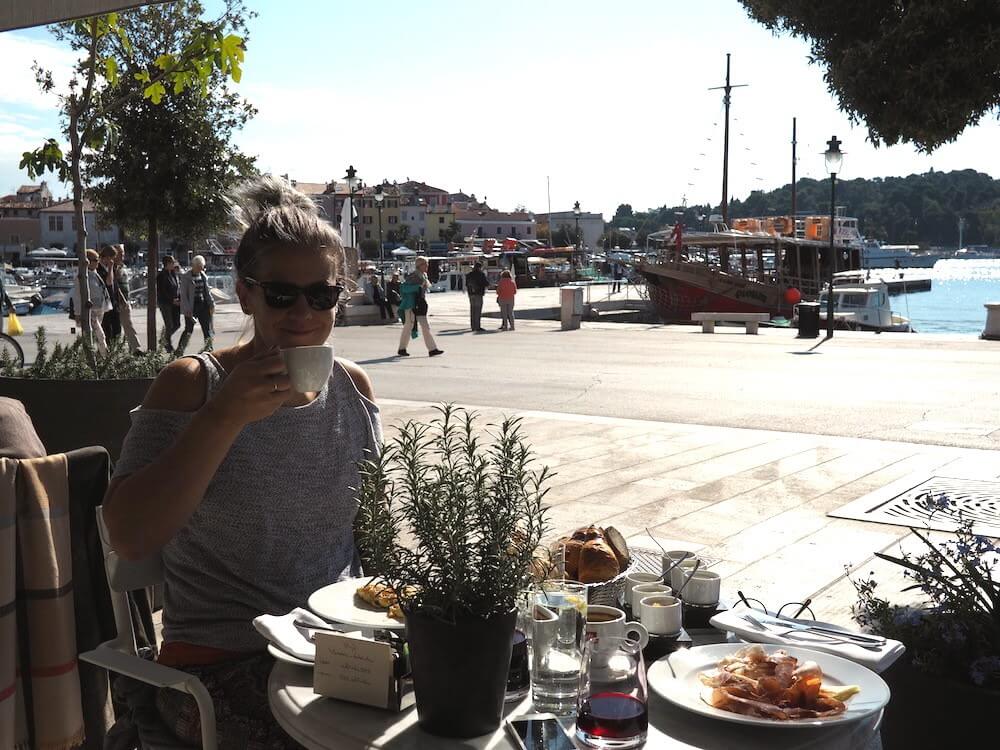 I’d recommend the other choices on the menu – fruit plate, jambon, muesli – over anything eggy or the traditional sausage. Our British sausage palates couldn’t take the fatty lumps in the sausage. That jambon though, yep yep. Just a little snack snack of an afternoon. We like to do it the Rovinj way with capers, anchovies and onion, with a few glasses of the local white wine on the side. I’d recommend you do the same.

5 top tips for food in Rovinj

1. If you can, try and coincide your trip with a visit to the sushi restaurant at the Lone Hotel. We were pretty gutted to miss out on our planned trip there on the Wednesday, because they only served on Monday and Thursday. Check before your plan your week’s eating.

2. Eat as many anchovies as you can.

3. And olive oil. A lot of the restaurants will create their own blend. We tried to buy some from the Hotel Adriatic but they said they only had a few litres left in their olive garden and there wasn’t enough to sell. Cool!

4. Go for the fish platters – you get to try more food in one go. If you’re not sure about how much you like fish, go for the starter platter at Kantinon. Seriously, amazing. If I had to choose, I’d say that Kantinon was the actual best restaurant in Rovinj, thanks to the platter, the wine, the decor and the vibe.

5. Rent bikes in the day and do some exercise so you can eat all the more at night. Food in Rovinj is excellent!

Have you ever been anywhere that
surprised you with how good the food was?

That banana split!! It looks heavenly and definitely the perfect birthday treat :)

I know! When it arrived, I was like ahh nooo, and then a few seconds later, ahhh yesssssss. Was yum :)