After a brilliant tip off from one of my friends in Barcelona we ventured out to the Hospital de la Santa Creu i Sant Pau on the way to the Sagrada Familia.

Am I allowed to say I was more impressed by this than I was the Sagrada Familia? Maybe it was because we were the only ones there, while at the famous church there were queues of over an hour.

We’d only been in Barcelona two days when we found ourselves at the incredible architecture of the gardens and pavilions of the Hospital de la Santa Creu i Sant Pau. There are plenty of hotels in Barcelona nearby to choose from, some even have a view over the famous hospital.

I’ve spent some time in hospital in my life, but none of them looked anything like this. The Hospital de la Santa Creu i Sant Pau is usually cited as the pinnacle of Catalan modernista style. Built under the direction of Lluís Domènech i Montaner it’s very different from the other hospitals that were constructed in the area at the time and is definitely the most beautiful.

Work started in 1901 and finished almost 30 years later in 1930. Located in the Naval district of Barcelona the Hospital de la Santa Creu i Sant Pau was a modern and spacious facility, known for its separate pavilions surrounded by gardens and streets and really took into account the patients’ quality of life. 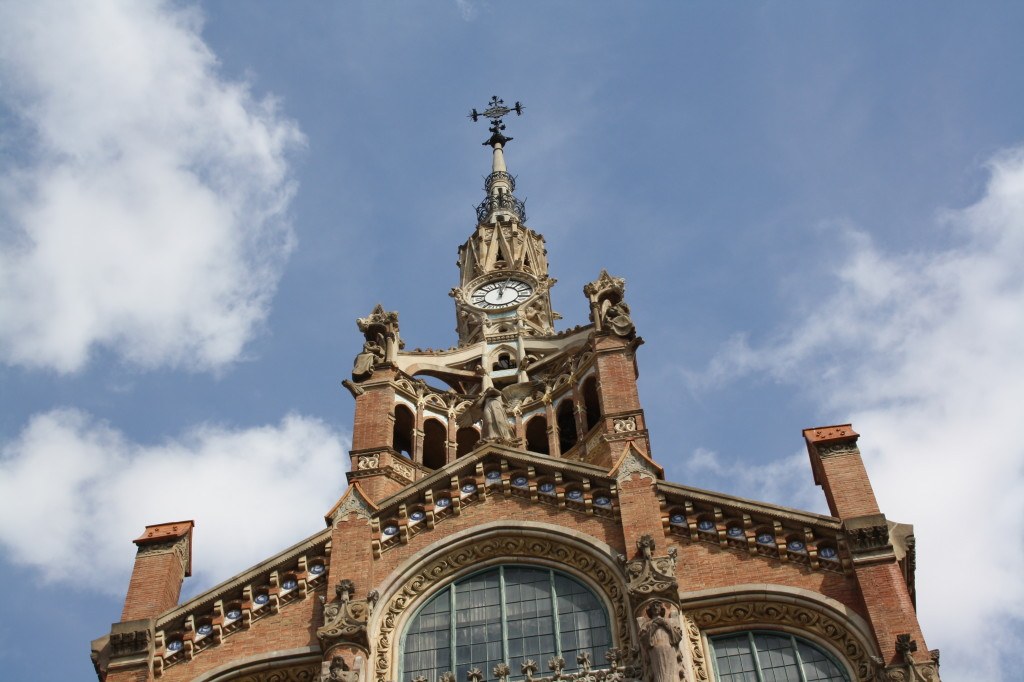 The brick building at the main entrance with its clock tower, is the hospital reception. Many famous artists worked on creating the sculptures here and they’re still intact for us to see today.

I think I actually stood open mouthed when I found out there was a whole underground tunnel network connecting the wards. How cool is that?! The site was declared a World Heritage Site by Unesco in 1997 and I couldn’t believe it was a working hospital. The architecture reminded me of Istanbul with all the mosaic and intricate detail of the buildings. Maybe time in hospital wouldn’t be so bad if you got to stay here…

They do offer tours around inside, but only on certain days so make sure you phone ahead if you fancy it.

After a good few hours enjoying the sun here we went on to the Sagrada Familia along the Avinguda de Gaudí, which was lined with pretty street lights, cafes and bars. It was only a five minute walk away from the Hospital de la Santa Creu i Sant Pau so make sure you do this detour if you’re in the area. Let me know how you get on!

If you’re looking for cheap hotels in Barcelona for your stay you should check out Barcelonahotelsbookings, the booking website of Gremi d’Hotels de Barcelona (the Official Barcelona Hotels Association). As well as being great value they’re also actually based in Barcelona so they know their stuff and can advise you where to stay.

The Big Guide to Oaxaca, Mexico
← Previous
The Best Things to Do in Guatemala, from 12 Travel Bloggers
Next →
Click here to cancel reply.