9 Steps to an Awesome Day in Key West

I didn’t really understand the whole layout of the ‘Florida Keys’ until I got actually there. It’s made up of 1700 little islands, known as keys from the Spanish ‘cayo’, which means small island. The most southwesterly one, that’s inhabited, is Key West.

It’s here that a strange mix of party people and old folk live in harmony among the colourful houses, by the beautiful seas and in among the incredible ghostly and literary history. I was in Key West for two days, enjoying the sunshine in a fresh, but warm January. Key West is more Caribbean-like than America, it’s only 90 miles from Cuba, although with the portion sizes, tip culture and US flags everywhere, there was no doubt I was still in the States.

I had an amazing day in Key West, and here’s how you can do the same…

1. Stay at the Ibis Bay Resort Waking up slightly jetlagged at 5am at the Ibis Bay Resort was a delight. There was a big Varadero poster on the wall – reminiscent of my mum and I’s visit to Cuba back in September – I had two double beds, cool bright furniture and a waterfront veranda which at the time was covered in herons thanks to the feeders I could now call neighbours who were sat out the back to watch the stunning sunrise. There was also a stunning pool at the Ibis Bay Resort and hammocks everywhere. Loved it! Blue Heaven is the most popular place in Key West to have breakfast, so of course, we had to go there for a test run. It’s advertised as ‘breakfast in the shade’, which sadly wasn’t a USP on the unusually chilly day we were there. I chose my seat in the line of sun, someone’s got to go do it.

I went for the special Key West shrimp omelette, with the super yum banana bread on the side. Five stars, absolutely. As we were leaving a dude with a guitar had set up, serenading the Monday morning breakfast lovers with his chords. The Bloody Mary here is apparently ‘a thing to have’ although I stuck with the coffee and orange juice.

The Blue Heaven Key Lime Pie was my first taste of six more over the next five days to come. Eventually not my favourite, but definitely the most instagrammable, which of course is just as important. 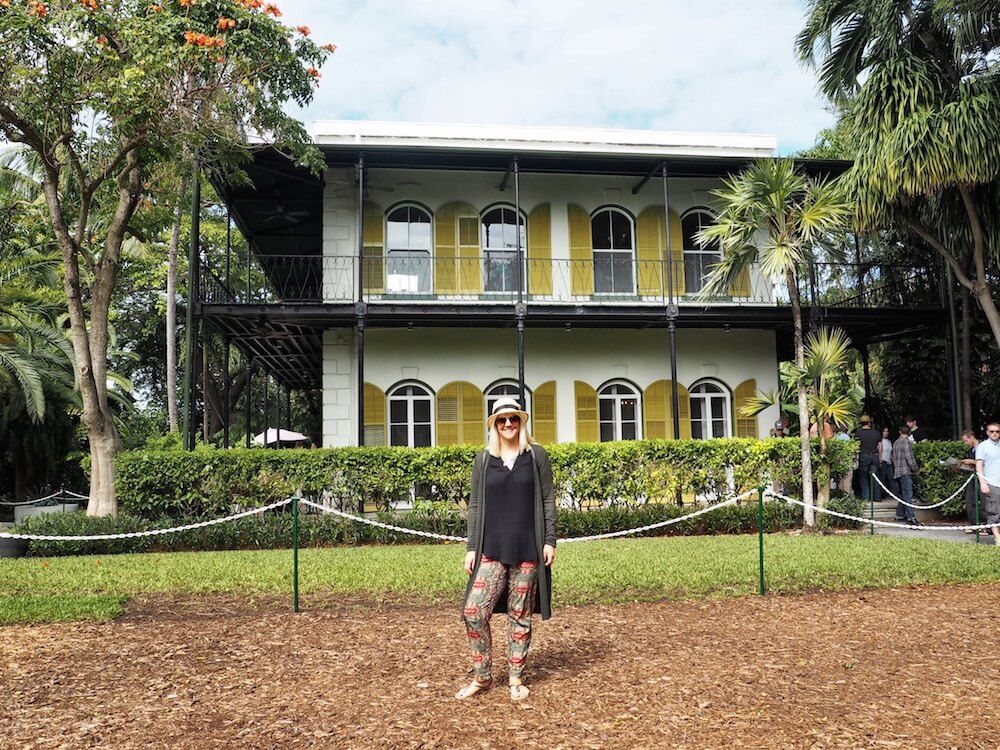 The house where Ernest Hemingway spent more than 10 years of his life, with two of his four wives, was located just across the street. As I wandered around on the guided tour I saw the six-toed cats (there are 42 of them, it’s a luck thing, comes from Maritime superstition). He’s a fascinating person, I keep meaning to read more about him actually, and to finish his books. I’ve been to Hemingway’s other house in Cuba too, which is where he went after he lived here. I saw his gardens, his pool (the one his wife Pauline Pfeiffer bought and spent £22k on, when his house was only £8k), and wandered round his studio. The lighthouse over the road apparently guided him home when he’d been on the sauce, useful. The Hemingway House is now the number two place to get married in Florida, after DisneyWorld, and is also now worth hundreds of thousands, so his family can thank him for making the investment. He was a very important member of the community here and not only kept the local bars in business, but also used to judge boxing matches over at Blue Heaven. 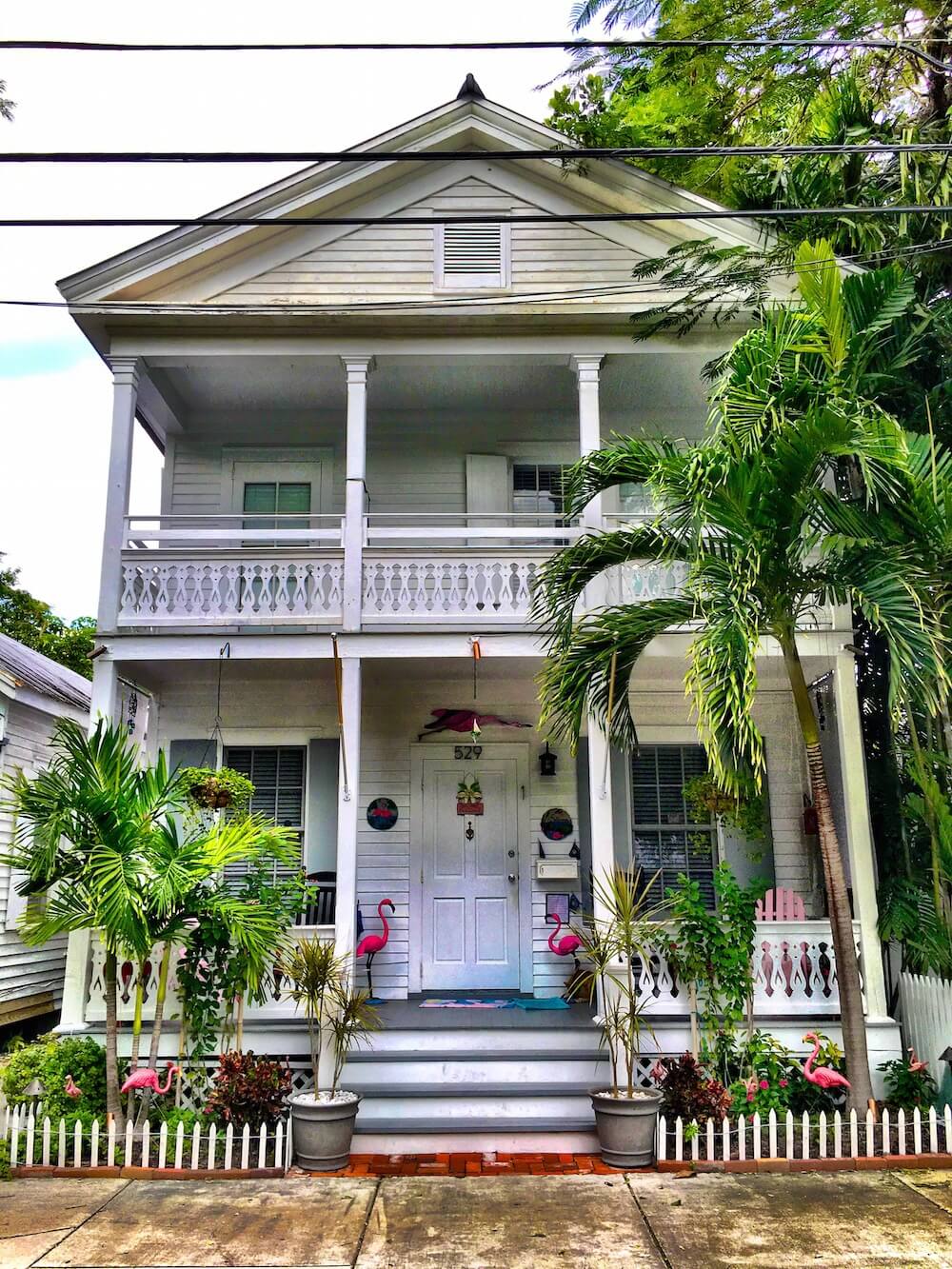 The houses, bars and hotels of Key West are so colourful. All wooden panels and pastel colours, I found my future Florida Keys home, if ever I was to live there, this one with this flamingo-themed offering. I walked down to the US’ southern most point – and walked out to the pier. It was here I saw the jet skiers and decided I couldn’t possibly move on with life without having a go myself. 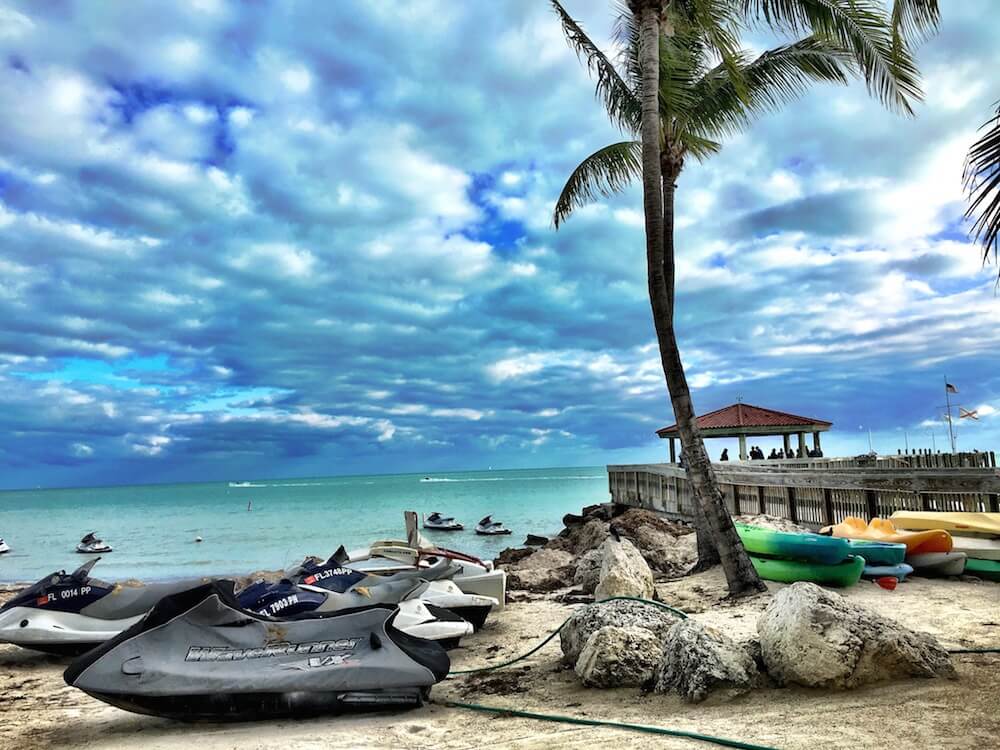 Jet skiing with Barefoot Billy’s was awesome. The water was blummin cold in January (just to be British and moan about the weather) but it was also an unforgettable afternoon in Key West. It’s the third time I’ve been jet skiing – after trying it in Croatia and Australia – and so I was feeling pretty confident. I had my hand clutched on that accelerator as hard as it would go and managed to get up to 45mph with the wind lashing and the waves pumping. I bounced my way round that Atlantic Ocean. What a buzz!

Jet skiing round Key West was a great way to see more of the coast, be out on the water and to learn more about the islands.

6. Craft beers at a local bar After a tough afternoon of rushing about on the waters of Key West I needed some refreshment. Cue the bar opposite our bus stop. The dude in there gave us a beer tasting and really listened to us when we told him what we liked in a beer, I appreciate that. From there we could keep an eye on the free bus back to the Ibis Bay Resort and dashed over to ride it back again. And then just because I’d seen ‘bacon’ written we also had some of that wrapped round crab stuffed prawns, just on the side, just because we could. 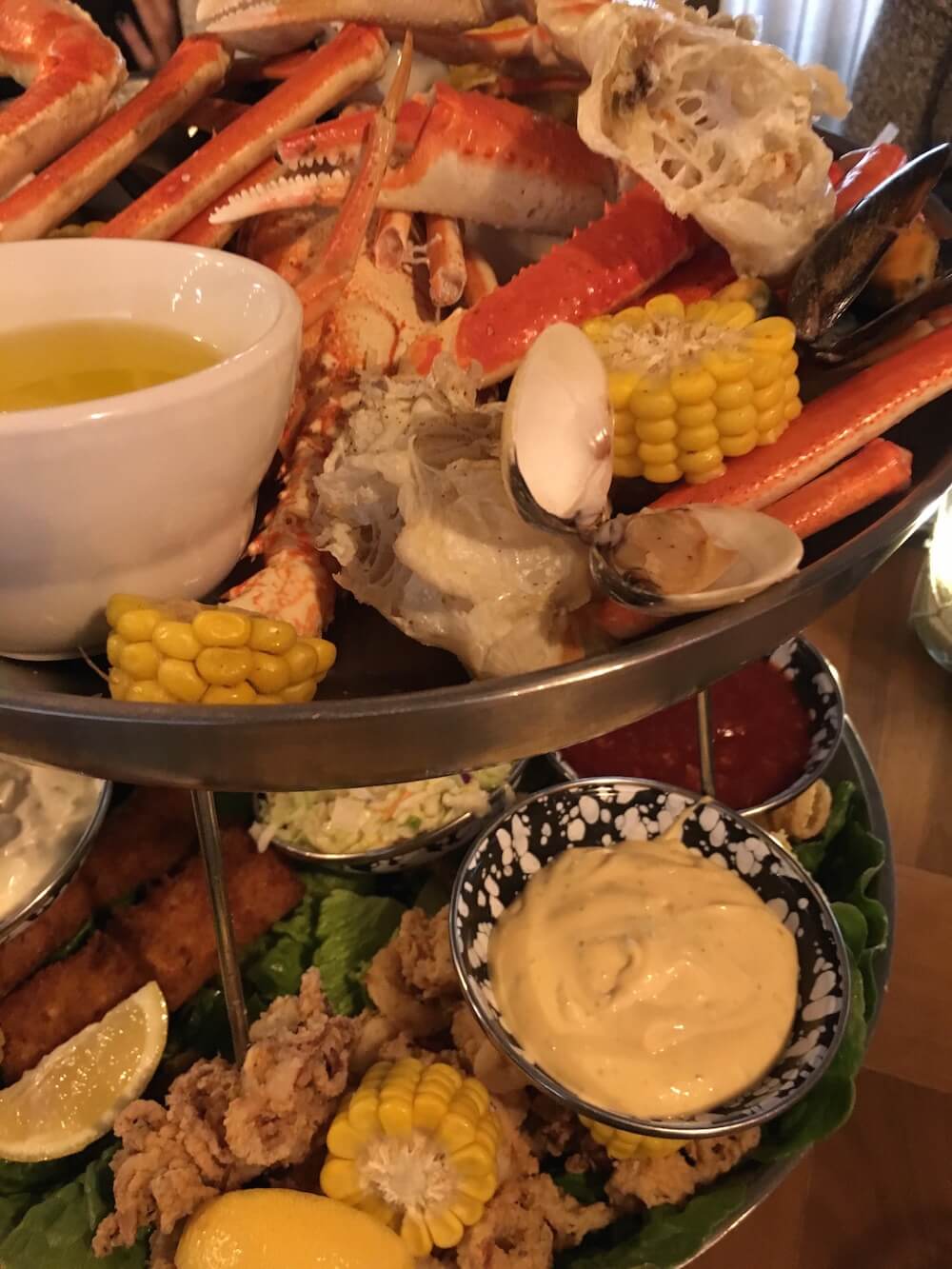 After that I was feeling like a stuffed crab myself, but still had the main I’d ordered on its way. A Fisherman’s Steamer – crab, shrimp and lobster all steamed together in a pot. Super healthy I thought.

One of my friends, Cailin from Travel Yourself, told me how she’d seen a ghost in Key West. Genuinely seen a ghost. So when the opportunity to go on a ghost tour with Key West Ghost Hunt came to me, I took it with an open mind and an open heart. 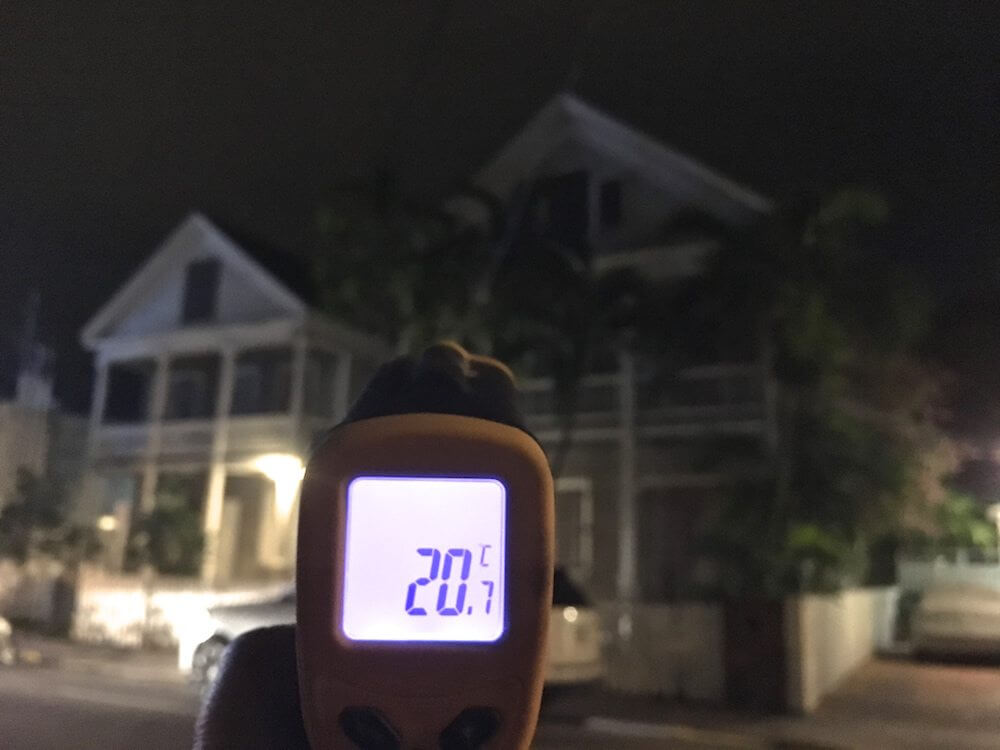 I’m sorry to say that by the end they’d closed up again though. We walked for three hours hearing tales of spooky goings on in the Keys. I saw no evidence, despite testing everything I saw with the ghost hunting device they gave us.

It was an interesting tour though, and I learned a lot about the history, think I was just disappointed I wasn’t going to have any ghoulie stories to take home. I wanted to find Casper.

READ MORE: If you’re looking for a 48-hour guide to Key West, check out this itinerary from hikebiketravel.com. Obviously you’re feeling a bit lucid from the must-try cocktails at the Stoned Crab, so now’s the time to really work on that buzz. The bar life in Key West is awesome, it’s why it’s a popular place for Spring Break and why people come down here from Miami. There’s always something going on and endless bars with it going on in. Unfortunately one of the crew I was with didn’t have their ID which limited things slightly. You get asked here all the time, I’m 31 and had to get it out at every opportunity.

I watched a live band at a bar that would let us in, saw the Irish bars that seem to be so standard for the USA, and stood frozen in the air conditioning that’s on super high. Remember your essential Key West nightlife kit when you go – something warm and your ID. Key West is a great place to visit. It’s a fun destination alone, but when you consider that it’s only a three and a half-hour drive from Miami, a short plane ride to the Tortugas National Park and surrounded by other islands to explore, it’s even more interesting.

Just let me know if you have any questions or comments below!

I was in the Florida Keys with Florida Keys & Key West tourism council. They showed me a brilliant week in the Keys, and all opinions and photos are mine.

More on the USA

tagged in things to do in

My 5 Best Places to Eat in Martin County, Florida

What to Expect from the Awesome Kennedy Space Center

8 Best Moments from My Trip to the Florida Keys