As soon as I got to Manarola in the Cinque Terre and realised anchovies were the local delicacy I knew I was going to like the place. Anchovies are without a doubt one of my favourite foods, and one of the most socially underrated in my opinion. If you’re one of those that grimace at the ‘A’ word, best skip to the ‘other’ bit halfway through. Anchovies just make food better, from Salad Nicoise, to cheese on toast, to pizza. I ate them every day, most days twice, for the four days that I was in the Cinque Terre.

Monterosso salad, anchovy antipasti, fried anchovies, anchovy bruschetta, extra anchovy pizza – I couldn’t get enough of them. Whether you go for the salty variety or fresh with a squeeze of lemon, in the Cinque Terre you’re safe in the knowledge they’re the fattest ones I’ve ever seen, and the tastiest.

This little area of five villages on the west coast of Italy isn’t just about anchovies though. There are a lot of foods special to the Cinque Terre, and drink, that you need to fit into your itinerary. I set a personal challenge to try all the food I could in my four days that I was there, although my budget did mean that sampling most of the seafood was out. 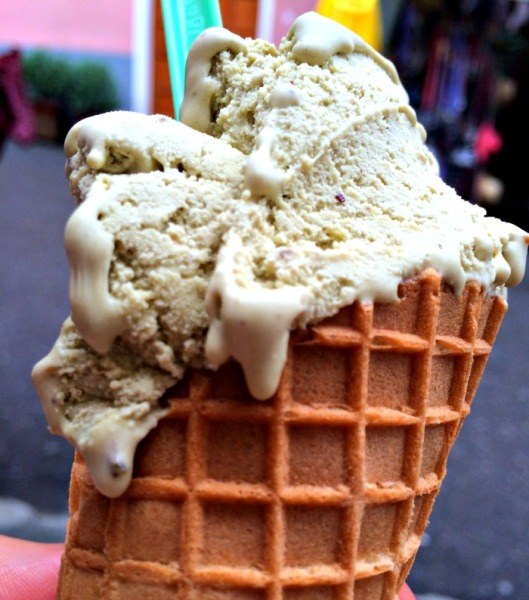 The best gelato was at the shop in Manarola, I had the pistachio one (twice) and it had real bits of nut in it, it was so good. Make sure to save yourself for this gelato shop, you’ll thank me later. 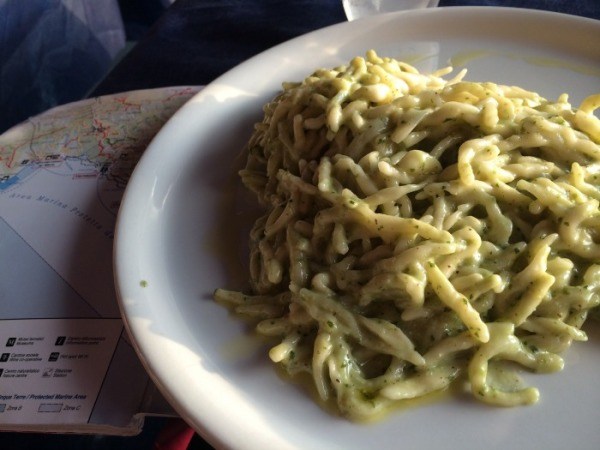 This was listed on every menu I came across so you won’t have to go searching. Trofie Pesto was invented in the Cinque Terre and is made from just flour and salt. It’s kind of like little sticks of pasta covered in tasty pesto (not a food writer – need some help from the M&S guys). The pesto is of course fresh here and for around €9 you’ve got yourself a good meal, I was stuffed by the end. It was quite stodgy so I’d recommend you share a portion, unless you’re really hungry.

READ MORE: My Complete Guide to Where to Spend a Weekend in Italy

Oh yes. Now we’re talking, I love these guys. I had a mix of calamari, octopus and anchovy in a cone, like a cone of chips (see photo above). I’m not exaggerating when I tell you how delicious they were. Calamari and octopus in England are often very chewy and rubbery, but these were succulent and tasty. The cone was €5 and you can fill it with what you want. I got mine in Riomaggiore, but I saw a few places in the other villages too. This is another of the must-try delicacies in the Cinque Terre, I tried one with olives on and for some reason handed over €4.50 for the pleasure. It was tasty, but that particular one was too expensive. Shop around and you can get the same for a lot less.

Had to be done! I got a slice of anchovy, caper and olive pizza and loved every bite. This was €4. Check out the pic in the ‘anchovy’ section. Ok, now I’m starting to sound ridiculously OTT I know, but the Focccacia con Stracchino was incredible too. It was kind of like puff pastry with soft cheese in. Every mouthful was like a hot slice of deliciousness. It was all greasy and gooey and my mouth is watering at the memory. This was €2 a slice from the bakery man in Manarola – must be good, he was a popular guy! This little beaut was filled with tomato and mozzarella. It was only €2 and I took it down to the Manarola waterfront to enjoy while watching the crazy kids jumping off the rocks. There was a lot of bread for the amount of insides but I still enjoyed it.

Sciacchetra (pronounced “shack-eh-trà”) is one of two of the local wines. This is a dessert wine often served with cheese. The wine will have been aged for three years before it reaches your glass and deepens in colour the older it gets. It was really sweet, and I tried one with salad which didn’t really work. I’d definitely give it another go though!

Made from the grape varieties of the 5 towns of the Cinque Terre. The wine is dry with a straw yellow colour and a delicate aroma. It’s best enjoyed with seafood.

I missed out on…

Taglierini, Miele di Corniglia Gelato, seafood carpaccio, vegetable pie, rice pie, cuttlefish, mussels and farinat – four days and a limited budget doesn’t quite cut it to make it through all the tasty food offerings in the Cinque Terre.

Such mouth-watering delicacies on here, love the look of the ice cream and the foccacia bread - not so keen on the anchovies but maybe a must-try while visiting?

Definitely! You can go for the lemon ones if you don't fancy the saltiness. If you're in the Cinque Terre you have to :)

Ar yes, I love a good anchovy, my friends think i'm gross. Quite partial to a garlic clove too - is that bad?

Ha, I don't think it's bad but I do remember eating one once and my friend shrieked 'no wonder you haven't got a boyfriend' in the middle of Nandos. Bit embarrassing and now I always think of that when I have a clove.

This really must be one of my best bits about traveling - sampling the local cuisine and experiencing so many divine new flavors and textures!

Me too! I remember when I was backpacking and all I'd eat were noodles – such a waste of the local cuisine opportunities! Now I'm in Mexico I'm trying it all :)

Ar yes, I love anchovies too! Totally underrated in my opinion. I also love pasta and tomato sauce and pesto and pizza, so I think I definitely need to check this Cinque Terre place out, or in fact, Italy. Can't believe I haven't made it there yet!

Ha, sounds like you definitely need to make it to Italy! All your favourite foods in one place – imagine!